An Afternoon in Brownville, Nebraska

Brownville, Nebraska, is a small town in the far southeastern part of the state. Once the largest town in the Nebraska Territory, with a population of 1,309 in 1880, it was an important port as goods made their way up the nearby Missouri River on riverboats. After the railroad system was built, the town became useless as a port town - as was so often the case in history. The town now boasts a much smaller population of 132 but what it lacks in size, it makes up for in historical significance, quaintness, and a host of interesting events throughout the year. During the week, it's a sleepy, bucolic village, but on the weekends, especially during the warmer months, this town comes to life.
I have visited Brownville one time, a handful of years ago, but it was during the week and it was like visiting a ghost town. I vowed then to come back one day to properly see and do all the neat things there are to see and do here on the weekend. So, one Autumn afternoon, I returned with my daughter and my BFF, Keith. 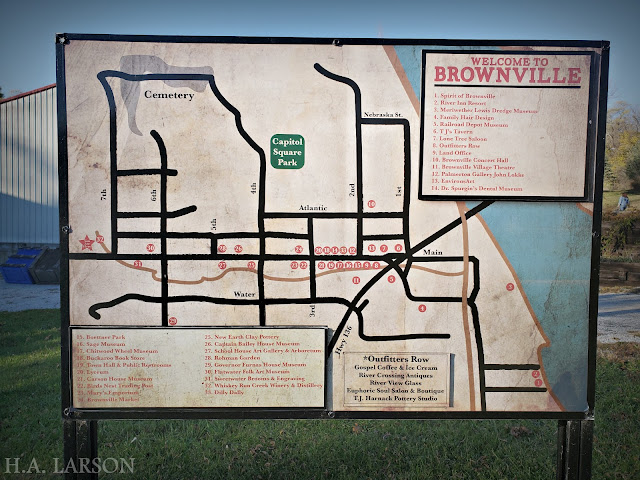 This handy map details where everything of note is. As you can see, it is quite a small town. 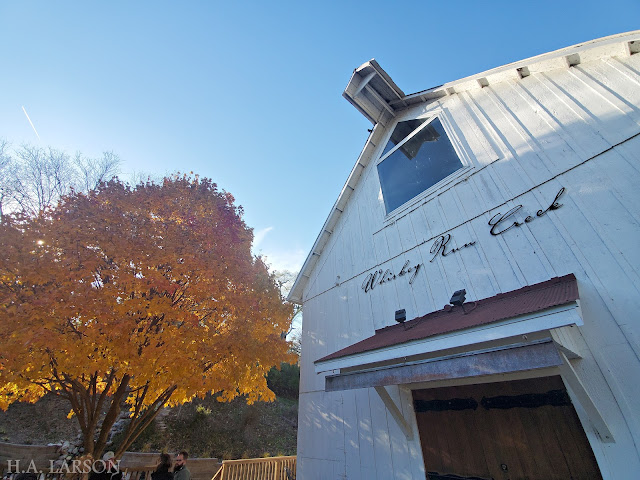 The map was handily outside of Whiskey Run Creek Winery - our first stop. It was a gorgeous day so we took our wine outside to sit and enjoy - after all, Fall just doesn't last long enough so take it in while you can, right? 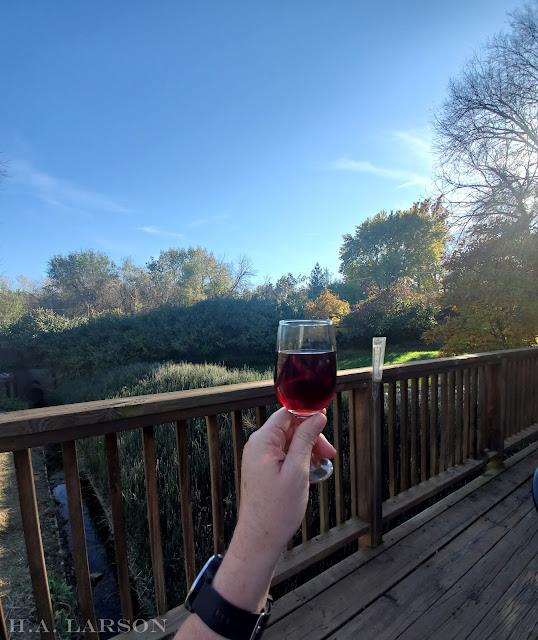 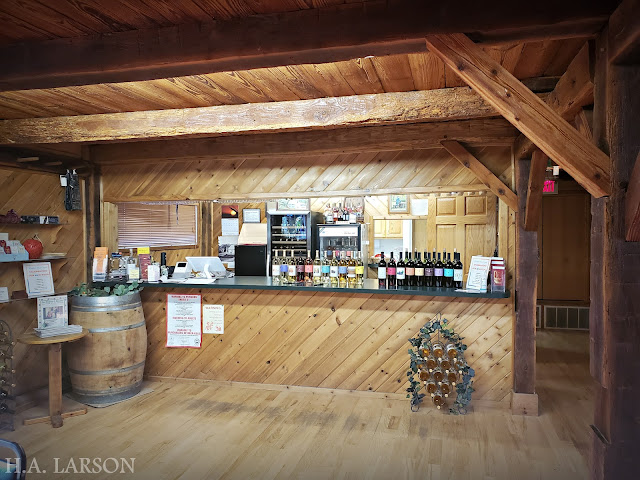 A view of the inside of the winery. 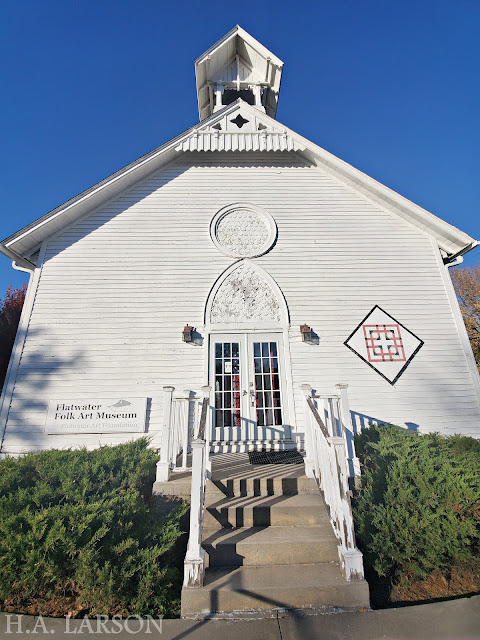 After a few glasses of wine, we headed out to see some of the museums before they closed for the day. Unfortunately, they all seemed to close early and I was once again foiled in my attempts to visit the interesting places of Brownville! We found this out as we attempted to stop at the Flatwater Folk Art Museum. Next time! 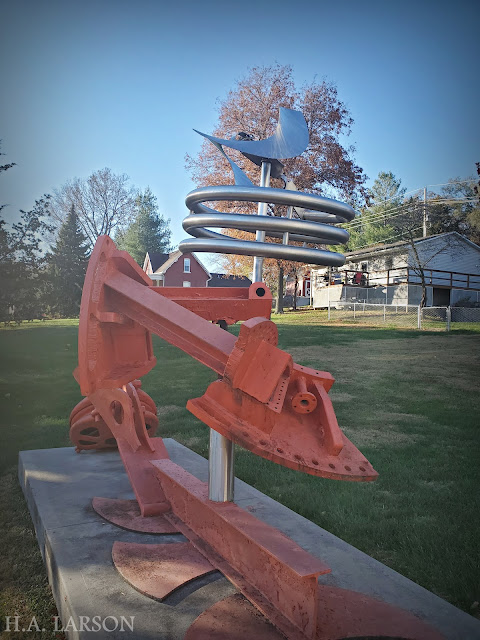 This metal sculpture sat outside of the Flatwater Museum. Try as I might, however, I was unable to find out any information about the sculpture. 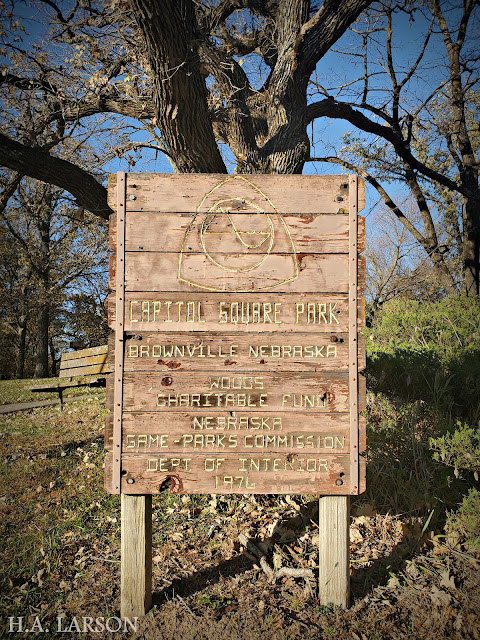 After this, we drove up onto the hill above the town to Capitol Square Park to have a snack - which I packed myself, of course. From its vantage point on the aforementioned hill, I afforded us a nice view. 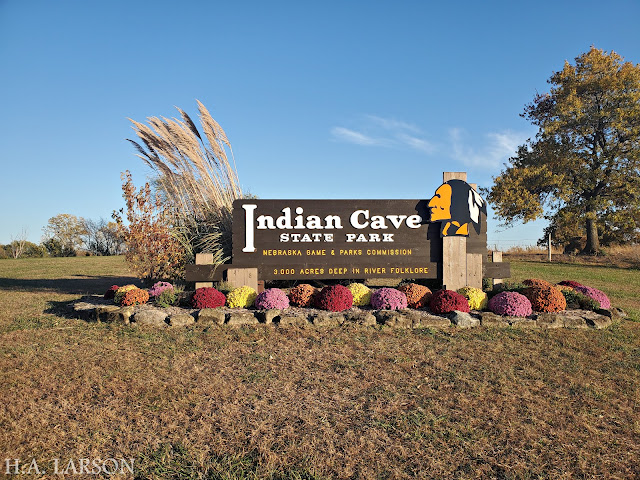 Since we were unable to visit the merchants and businesses of Brownville, I decided to drive over to Indian Cave State Park. It wasn't far away and I figured it would be the perfect day to take a drive through it. The cave is currently closed so that was a bummer, but it didn't deter us. 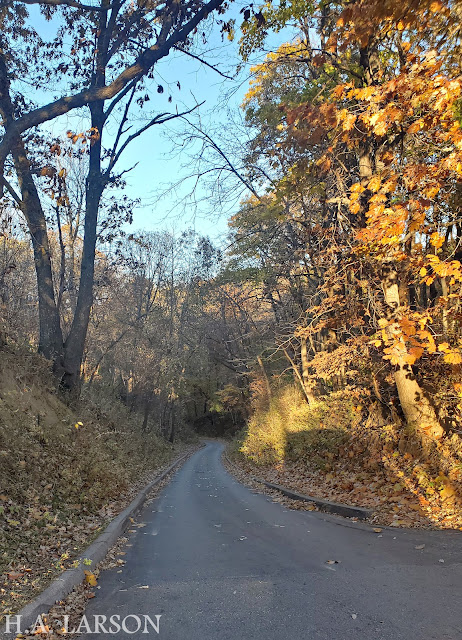 There's a long, one-way drive that weaves around the park and its attractions. 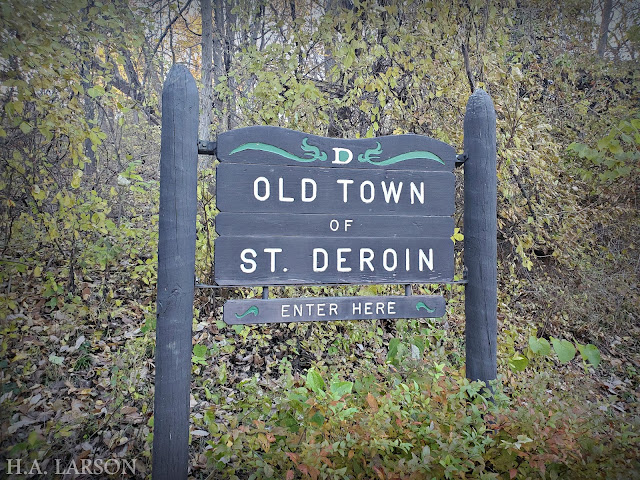 The first attraction is the Old Town of St. Deroin. It's the first time, of the handful of times I've been here, that I actually stopped to check out St. Deroin. 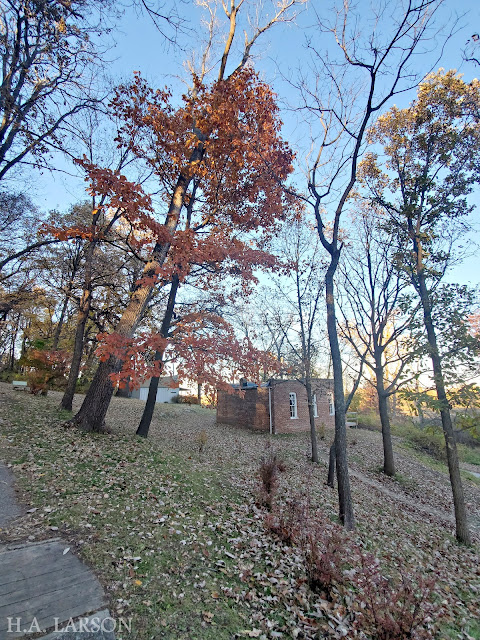 It's a ghost town that grew up around a trading post and was named after the trader in question, Joseph Deroin. Formally charted in 1854, it had a popular ferry crossing over the Missouri River until the river changed course. After a few more tragic events, it was eventually abandoned and taken over by Nebraska Game and Parks. 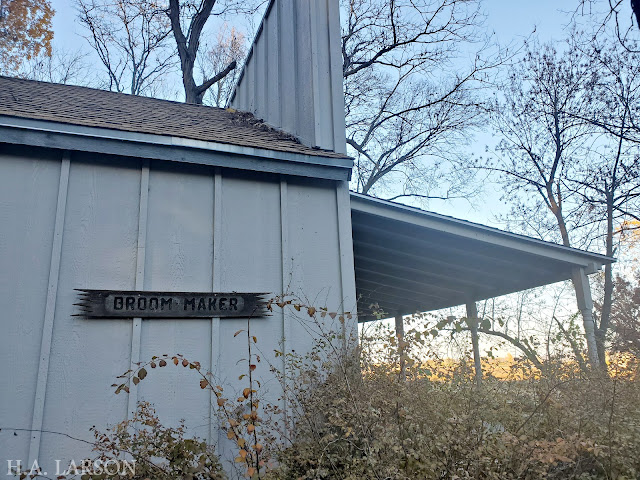 Today, only two buildings and the old half-breed cemetery survive. One of the buildings is the Broom Maker's shop. 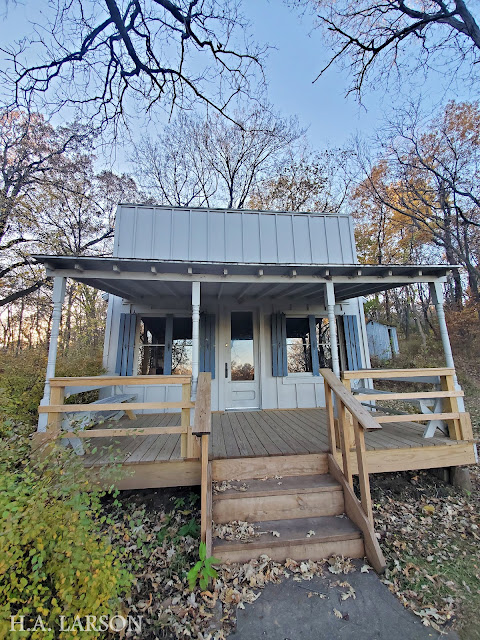 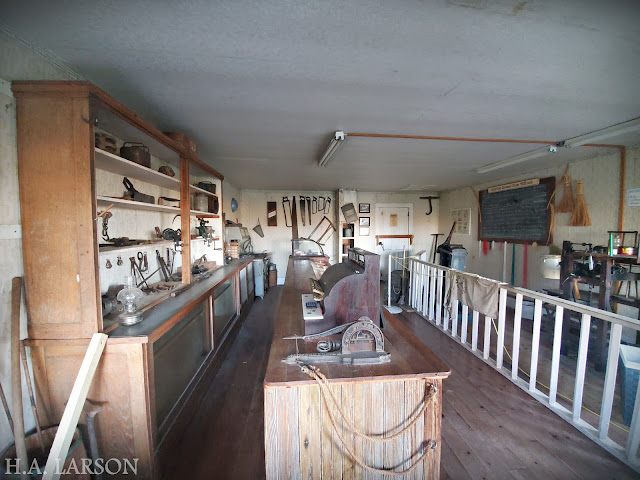 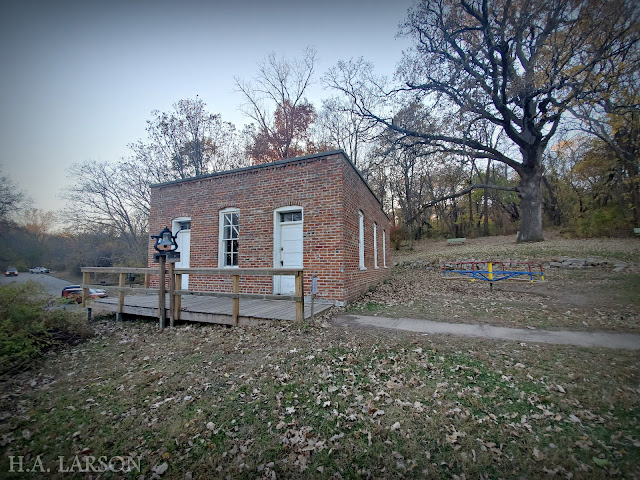 The other building is the old schoolhouse. 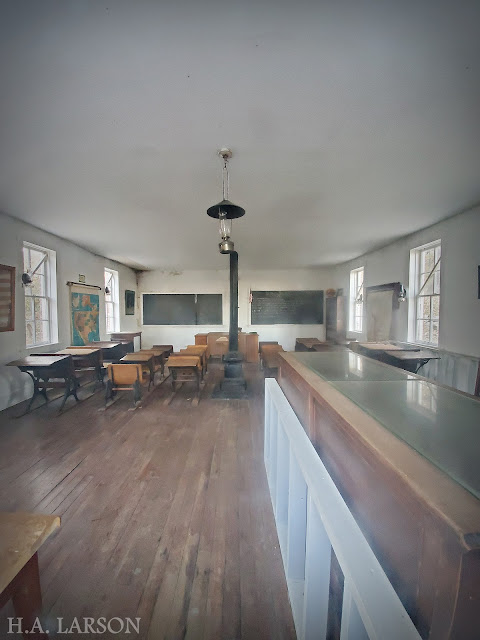 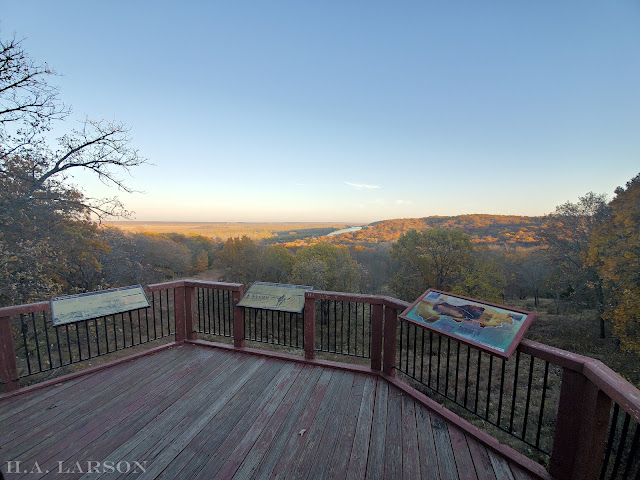 After leaving the Old Town and cemetery, we continued on the road to my second-favorite spot (besides the temporarily-closed cave): the Overlook. The view here is fantastic! 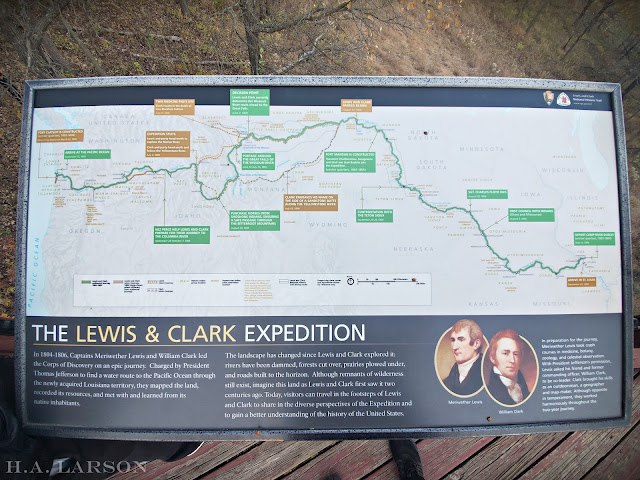 I've mentioned this before, but living near the Missouri River for most of my life means I have no shortage of Lewis & Clark information within a short drive. 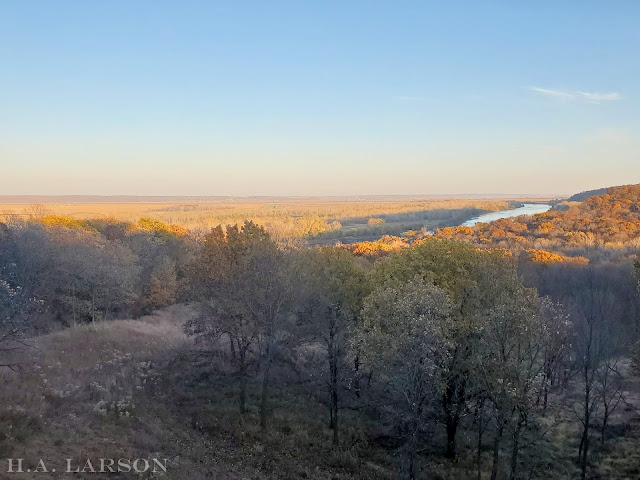 Ahhh, Autumn in all her glory... 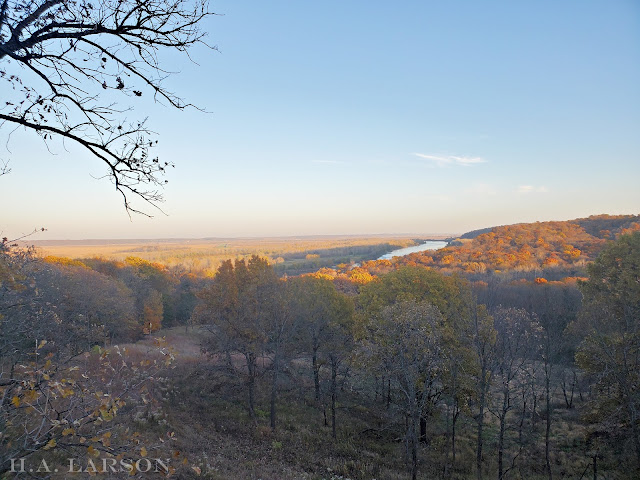 ...while the Mighty Missouri River snakes its way through the lush landscape.
This was a great way to spend a lazy, Sunday afternoon. It's only about an hour's drive from Omaha and there are plenty of things to do. I swear, though, that when the weather warms up this Spring (or maybe Summer, we'll see) I'm going to get down to Brownville and finally visit all their museums and shops. Hopefully, the cave in Indian Cave State Park will be open and I'll make my way down here again, as well.
Labels: Adventures in Travel Musings Photography The Great Outdoors