Spring just doesn't seem to want to arrive this year, and I've found myself moping around the house more days than I should. Easter Sunday was one of those days, so even though it was a breezy, but sunny, 28 degrees I was determined to get out of the house. Since taking photos is an amateur hobby of mine, I grabbed my family, my camera, and explored a handful of places in the metro area that I like.*

After we were done, we headed home on a familiar path: Mormon Bridge Road. One landmark on that road is Forest Lawn Cemetery. I've driven by it a bunch of times but have never gone inside. The only things I knew about it were that it was huge, that it was a place where prominent people of Omaha are buried, and that the historic chapel is haunted. I made a split-second decision right after we passed it that day to turn around and finally go inside to check it out. I'm glad I did because it is such an interesting place! It's a gorgeous cemetery with some incredible mausoleums and grave markers. It's also well-maintained, unlike Prospect Hill Cemetery


This plot marker for John and Elizabeth Lauritzen is a nod to Greek architecture. John Lauritzen was the founder of Lauritzen Corporation, a bank holding company that has a large stake in First National Bank. He and his wife were philanthropists as well, and Lauritzen Gardens are named after him.


The first two mausoleums are, from left to right:

1. Dr. C.C Criss: founder of Mutual of Omaha and the namesake of the Criss Library on the UNO campus.
2. The Landen Family: Clarence Sr. and Clarence Jr. started Central Insurance Co. and, later, Jr. would go on to form Security National Bank. 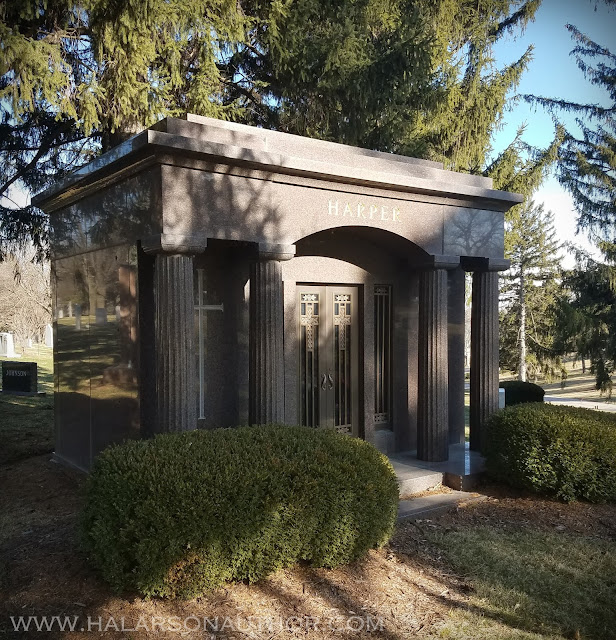 This is the grave of Charles Harper and his wife, Joan. Mr. Harper was the CEO of ConAgra Foods, maker of HealthyChoice, Hunt's, Ro-Tel, P.F. Chang's, and countless others. 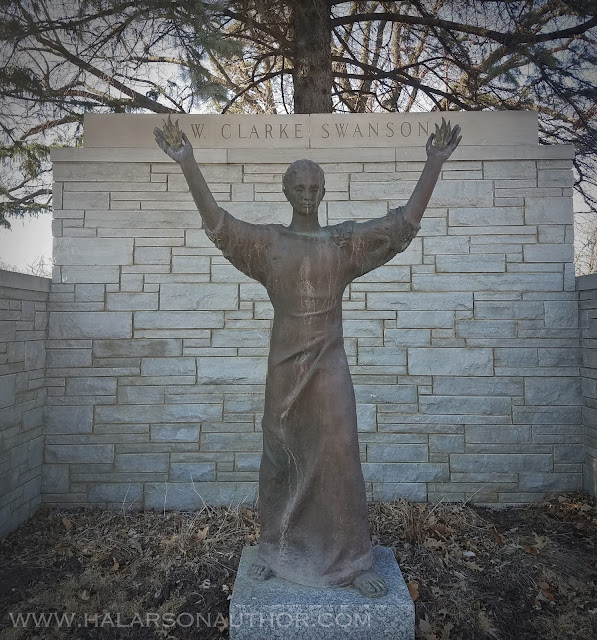 This is the grave of W. Clarke Swanson, President of Butternut Coffee and Director of Campbell Soup. His name graces one of the city's libraries. His father, Carl A. Swanson, started Swanson foods (remember old t.v. dinners?), and he's the namesake for Nature Girl's school. 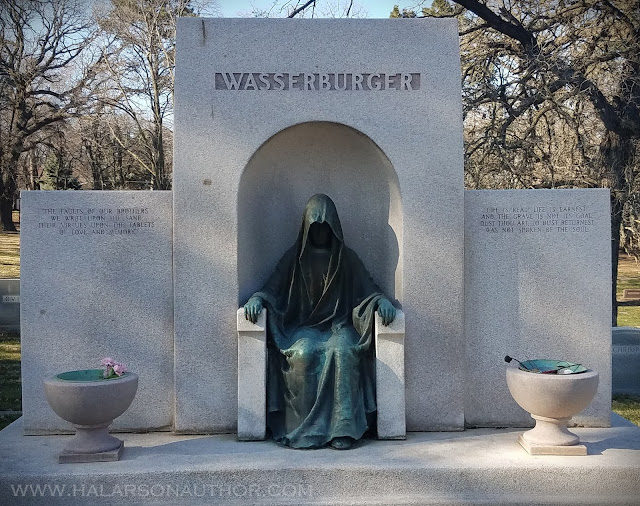 This is one of the most famous graves in Forest Lawn Cemetery, primarily for its interesting bronze statue. Josiah Wasserburger was the manager of the Omaha Loan Company who also invested heavily in real estate and made quite a bit of money. He and his wife, Alma, purchased this grave marker eighteen years before their death (and during the Depression no less) from J.F. Bloom & Co. The monument had sat, unpurchased, for five years until the Wasserburgers bought it, and it cost roughly $60,000.00 in today's money. 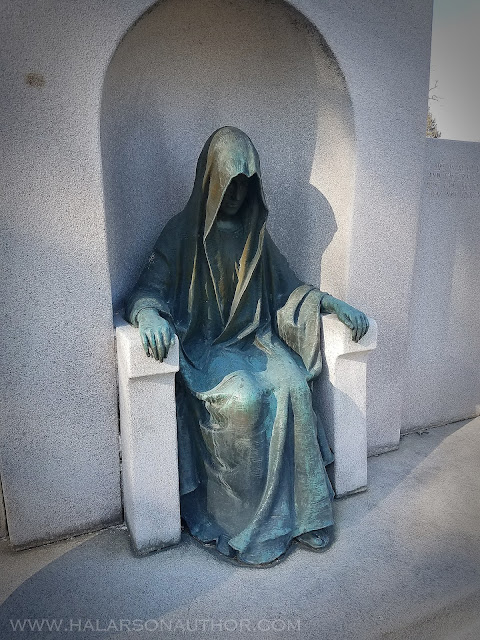 A closer look at the bronze statue. 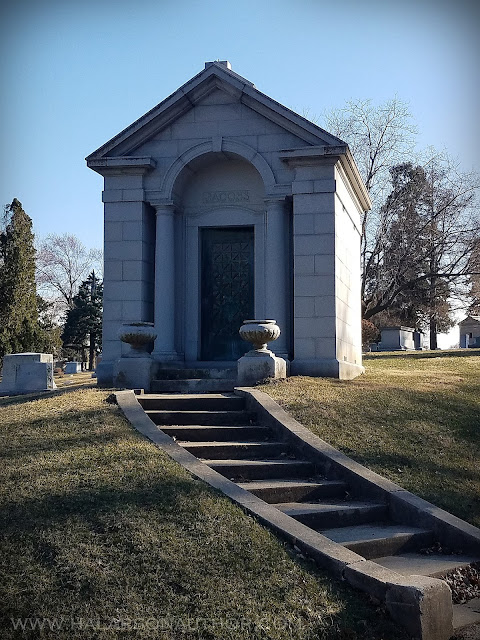 This is the burial site of John G. Jacobs. He died young, at age 26, and I could only find information on him by searching for the other occupants of the mausoleum, namely Lillian Maul. Lillian Maul had donated land to the University of Nebraska-Omaha (where I work coincidentally enough) in honor of John G. Jacobs, who was her son. A gym was built on the site but was demolished in 1964. 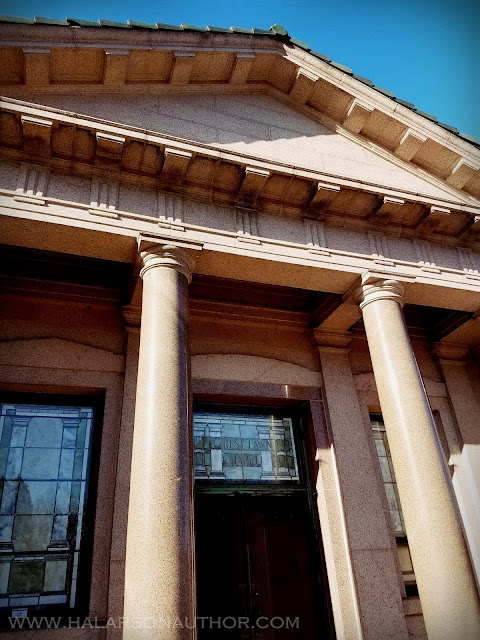 This is the entrance to the historic Forest Lawn Chapel. Funerals and even weddings have been held here for decades. A new chapel was built in 2014, but people can still use this chapel if they want. The old crematorium is under the chapel, to the right of here, but is no longer operational as the new one is hidden across the road. This Chapel is purported to be haunted - indeed I have read some accounts of investigations that have been held there - so I did a quick, impromptu EVP session, but I didn't get anything. 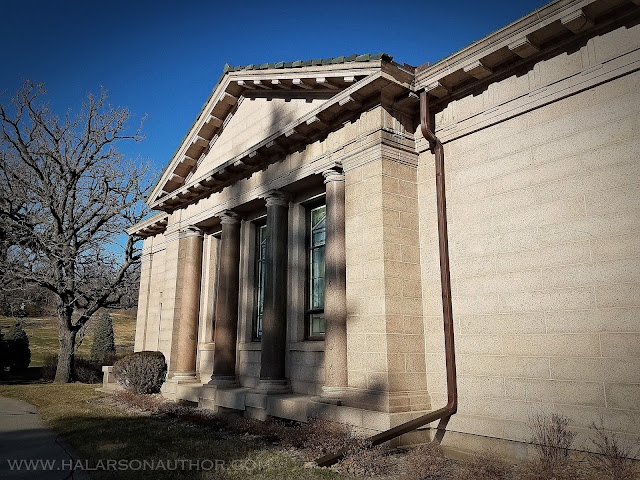 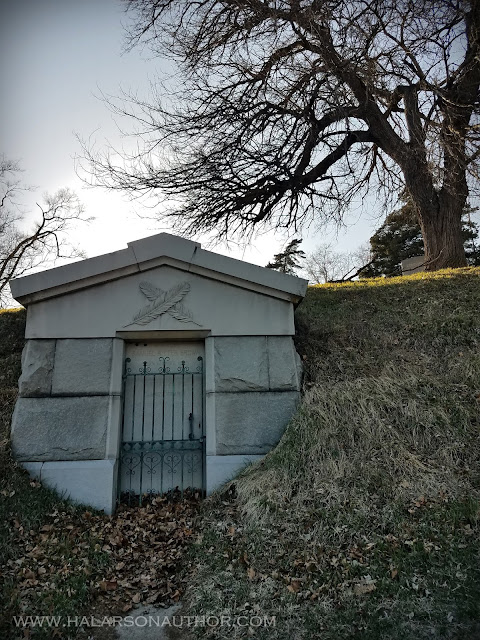 This mausoleum is unmarked but it sits within Babyland, one of a couple of sections where babies are buried. 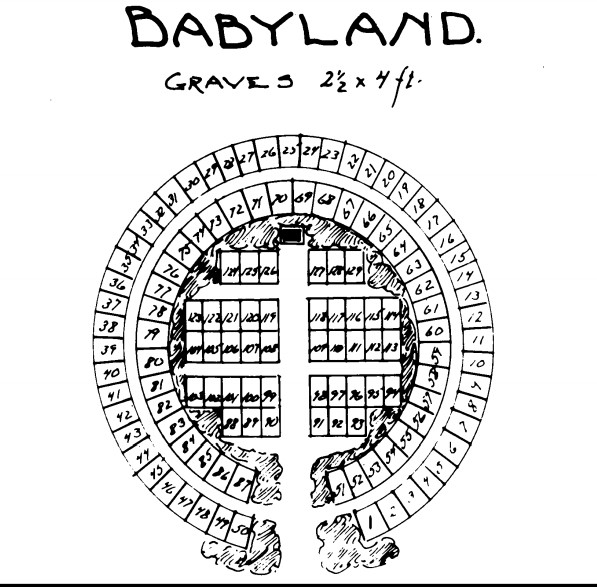 Here's a detailed map of Babyland. The mausoleum (I think) is the black box shown at the end of the lane. 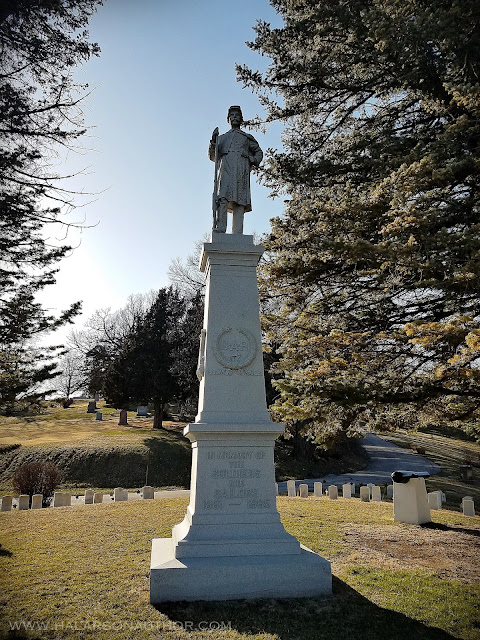 This section of the cemetery is dedicated to soldiers. This statue sits in the middle of a ring of soldiers graves and is surrounded by four fake cannons. 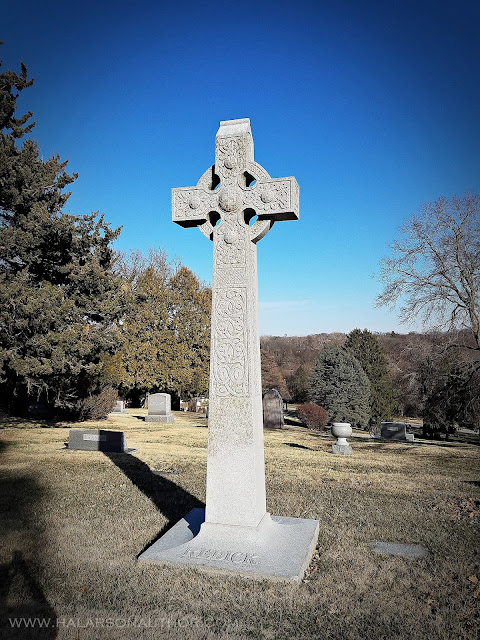 This Celtic cross monument marks a burial plot for the Redick Family. John I. Redick (D.O.D. April 2, 1906) was a prominent lawyer (once working for Union Pacific Railroad) and judge. He was the Chairman of the Nebraska Republican Delegation that nominated Abraham Lincoln and Andrew Jackson. A street in North Omaha is named after him. 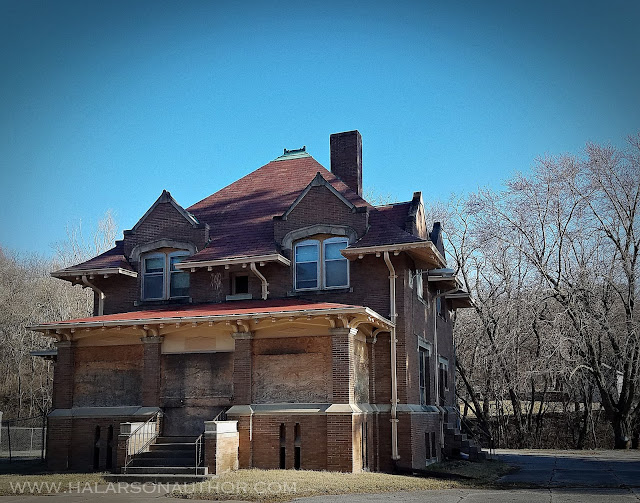 An old abandoned house at the blocked-off back entrance to the cemetery. I believe it wasn't originally a part of the cemetery as it's not on any of their old maps, but I can't find any more information about it. If you know, feel free to comment. 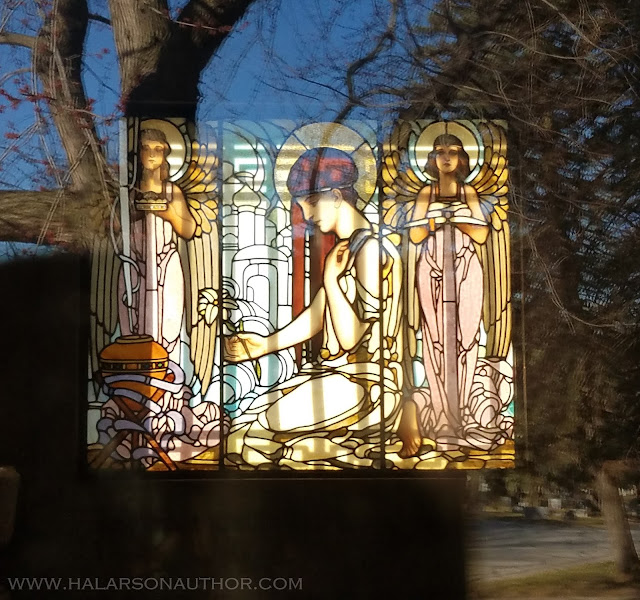 As we were driving out of the cemetery, we came upon a mausoleum with glass doors. The glass doors and the sun afforded us a glimpse of a beautiful stained-glass window in the back, so I stopped to get a picture of it. This mausoleum is the resting place of Joseph Cullen Root, founder of Woodmen of the World. If you've ever been to Omaha, you would surely have seen the two large buildings that dominate its skyline: First National Tower and Woodmen Tower. 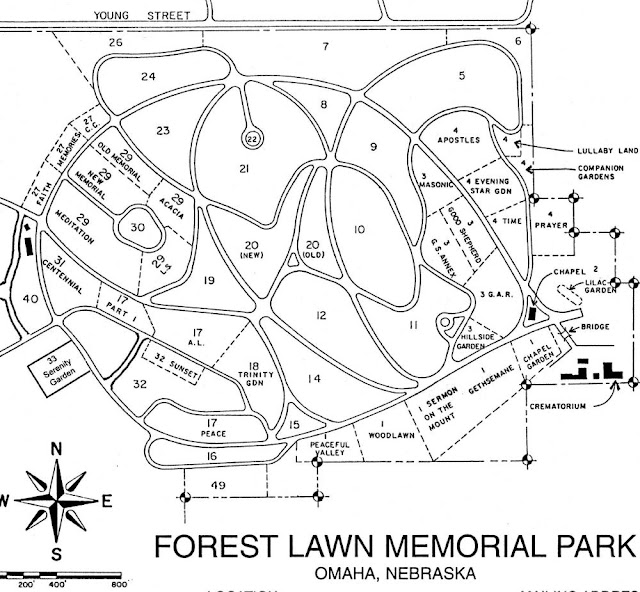 Going to Forest Lawn Cemetery was a memorable experience, and I'm looking forward to going back to visit and definitely to conduct a more proper EVP session. I'll keep you posted on that. For now, enjoy your weekend!

*Unfortunately, I did not check the batteries in my Nikon before leaving the house, so they ran out of juice at location one. I took these photos with my android, so while they look good, they're not as good as the ones I would have taken with my camera.
Labels: Ghosts & the Paranormal Musings Photography