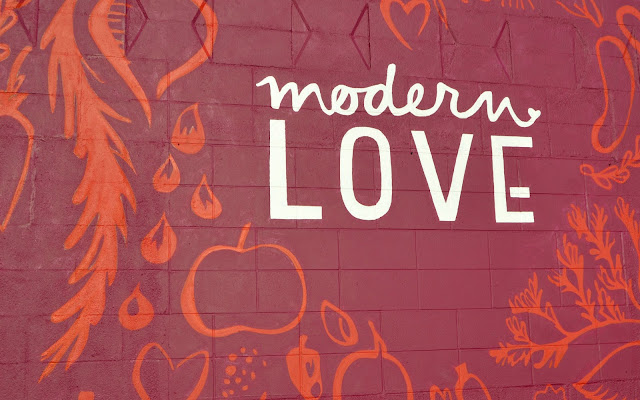 May marks the third year that I've eaten an exclusively plant-based diet. In those three years, Omaha has come a long way when it comes to food options for vegans. While we have excellent vegan options at many restaurants now, there's only one restaurant in town that serves vegan food exclusively: Modern Love. While I've always loved food, I never became a foodie until a) I moved to the city, and b) I switched over to a vegan diet.

I was so used to the traditional Midwestern foods I had eaten my whole life that it was the same kinds of food I kept eating well into adulthood. Moving to a city exposed me to a whole new world of foods, particularly ethnic foods. I had never had Thai, Spanish, Middle-Eastern, or Indian food until I came to the city. Then, when I switched to a plant-based diet, I had to learn to cook all over again. In the process, I became a foodie. Finding Modern Love has been a great place for me to expand my palate and proliferate my love of good food. I've only had one dish there that I wasn't fond of, while everything else has been incredible.

Modern Love is the creation of Isa Moskowitz. Hailing from Brooklyn, NY, she was the host of the former cable show Post Punk Kitchen, author of 10 vegan cookbooks - I own the 10th Anniversary edition of her first one, Vegan with a Vengeance - columnist, and, now, restauranteur. Modern Love opened in Omaha in 2014, while a second location was opened in her native Brooklyn in 2016.

(First off, let me apologize for this photo and many of the others. I have become a better photographer over these last three years.) January 2015, was my first visit to Modern Love, and it was a few months before I made the full switch to veganism. I had the Orange-Hibiscus Soda (fun fact: this was before they got a liquor license and people would bring in their own bottles of wine). My main course was the Tempeh Bibimbap with seared brussel sprouts and housemade kimchi, which was perfectly cooked, and for dessert, I got the coconut cream pie with coconut whipped cream. It melted in your mouth with the flakiest crust ever. 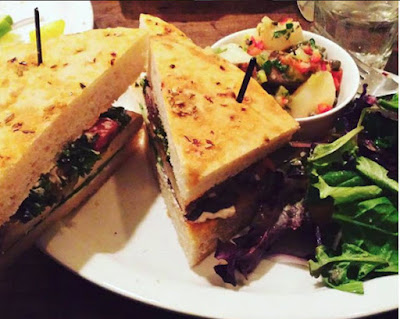 I didn't return until January of 2016 when my husband and I went for our 10th Anniversary. We started off with the house Red Pepper Hummus with crudite, which I get almost every time now as it's the best hummus I've ever had, and the crudites are lightly seared tri-color peppers, carrots, and radishes. MMM mmm. This time around I had the Applewood-Smoked Tofu on homemade focaccia, potato salad, and greens with a tomato viniagrette. That smoked tofu was heaven sandwiched between two flavorful pillows. I wasn't as fond of the potato salad because I prefer mine fairly plain, but it was still tasty, and the vinaigrette made that whole salad. After that experience, I tried making smoked tofu myself with great success. I scored some ciabatta rolls and a bottle of muffaletta salad at Aldi around that time and made bomb sandwiches with the tofu. 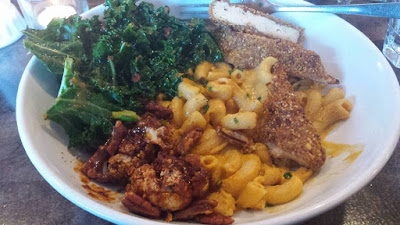 Not wanting to wait as long the next time, I went again in February of 2016. I ordered the Mac 'n Shews - a wonderful mac 'n cheese made with cashew cheese - that was served with Pecan-Encrusted Tofu, bbq cauliflower, and dressed greens. Not shown: Cashew Rangoon with Spicy Apricot dipping sauce. This meal was delicious, homey but swanky, and again I copied the dish, only this time with the cauli. My favorite item this evening, however, was the Cashew Rangoon. It tasted so much like the real deal that I wondered if I was getting tricked. 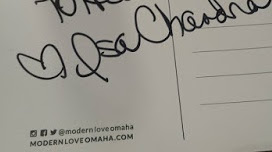 This particular trip was special because Isa was in the house. She stopped by our table to refill our water, so I complimented her food and asked for an autograph which she happily obliged me with. It's the perfect book marker for my copy of Vegan with a Vengeance. 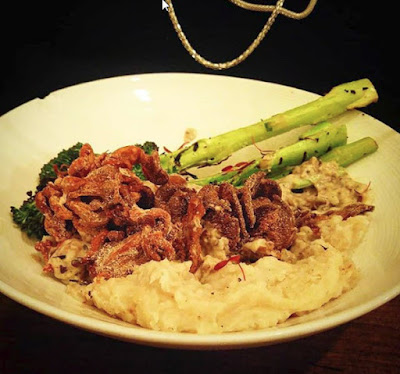 My last visit was on our 12th Anniversary, on January 13, 2018. I ordered the Wild Mushroom Schnitzel with mashed potatoes, mushroom gravy, and lightly grilled broccolini. I don't think I've ever tasted anything as divine as this meal. Not shown, Five Spice Cauliflower Wings and the Pear & Apricot Bread Pudding (made to order) with homemade vanilla ice cream and coconut whipped cream. We ate everything, and I was so sick afterward that I could barely enjoy Vis Major's charming atmosphere and brews. The bartender took pity on me, giving me bitters mixed with club soda, and it helped. I've never eaten SO MUCH FOOD at one sitting, and I will never do that again! Well, with food this amazing, there are no guarantees!

The only dish I had that I wasn't a big fan of was the Tofysh Sandwich. I never did take any photos of that trip, and not because I didn't like it. I was with friends and was making a conscious effort not to be on my phone.

Modern Love's menu rotates to offer what is in-season. You can find their website here or their Brooklyn location one here. You don't have to be a vegan to enjoy their food...most people who go there aren't. You just have to love inspired, delicious, and beautifully-plated food.