When we were on vacation, my Dad took us on a day trip to South Dakota. We spent time at Falls Park and Palisades State Park before heading back home. Since it was on the way, we stopped at Gitchie Manitou Wildlife Area.

Gitchie Manitou sits right in the uppermost, northwest corner of Iowa and butts up against the border of South Dakota. It derives its name from the Algonquian, meaning "Great Spirit" or "Great Force of Nature". The area used to be a state preserve but the state recently relinquished responsibility for the park and it is now a wildlife preserve run by (I believe) Lyon County. It's known for its Native American burial grounds and its 1.6 billion-year-old quartzite outcroppings.

After walking three-quarters of a mile of trail, you come to a foot-worn trail to the right that leads to an old stone structure of some kind. 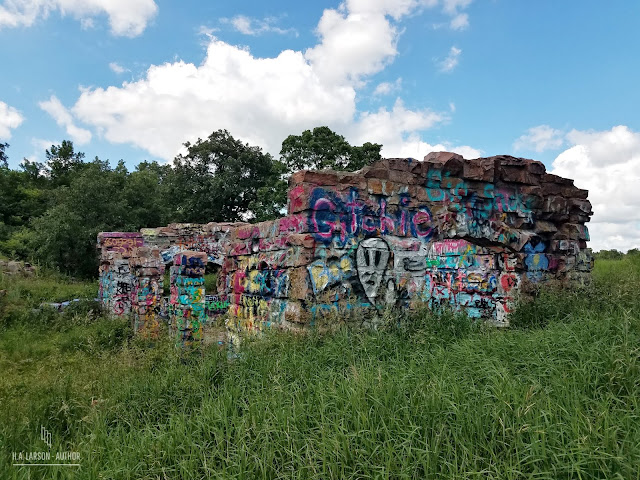 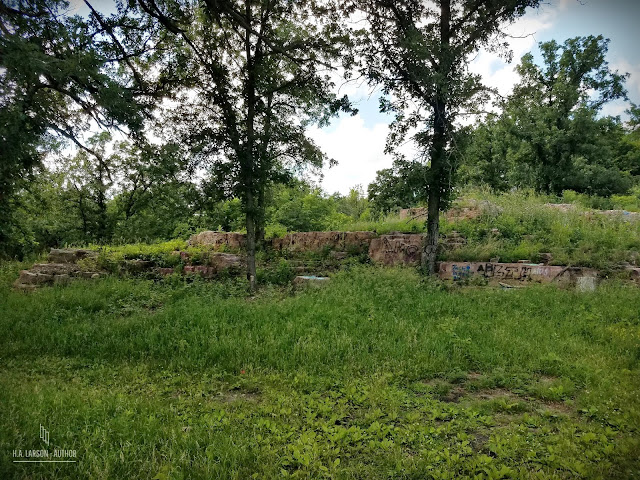 A glance to the left of the structure reveals the ancient quartzite outcroppings that are known throughout the area. Graffiti is evident here as well. 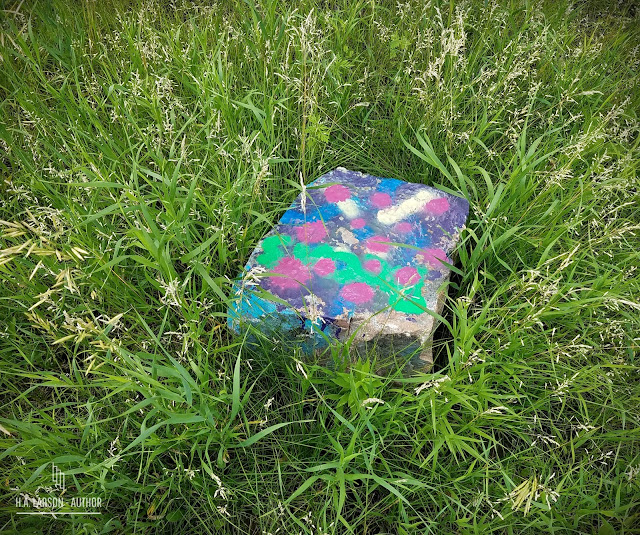 Nothing here has been spared from graffiti. 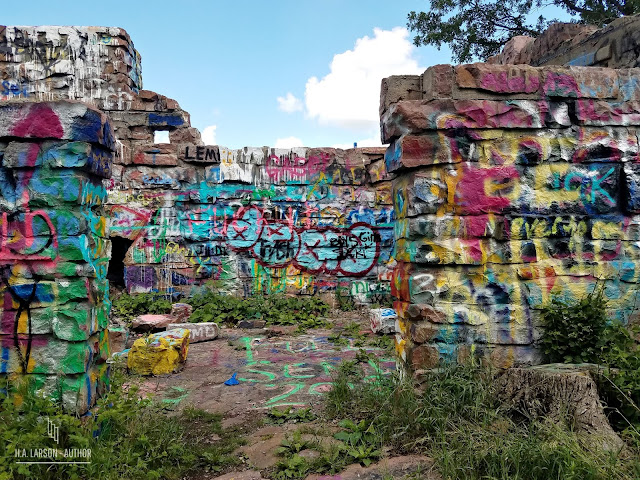 A view into the old, stone structure from what would have been the entryway. Years of graffiti have covered nearly every square inch of it, but I could still tell that it used to be a lodge of some kind as there's a fireplace inside. I could also tell that it was constructed of the quartzite that is so abundant around it. Beyond that, I can only guess what it might have once been. There is no information, that I could find, that tells me anything about what this lodge was used for, nor who might have built it. It's truly a mystery. 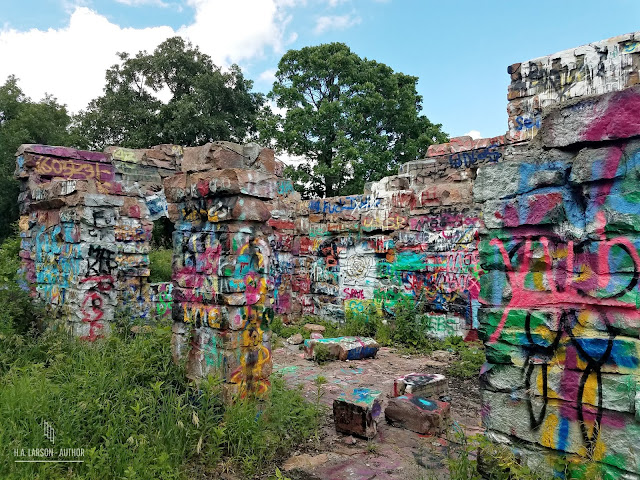 The graffiti is such a stark contrast to the area that surrounds it. While it's vandalism - and my Dad was disgusted by the blatant disregard for its preservation - I kind of liked it. While not high art, it's art nonetheless and looks cheerful and bright - something this place needs.

Violence is the first refuge of the violent. - Aaron Allston

It's obvious this place is a hangout for local kids to come party and has been for decades from information I have been able to find on the internet. While small and unassuming, Gitchie Manitou has a dark past: one that rocked the area for years, ruined one woman's life, and gave the park a haunted reputation. 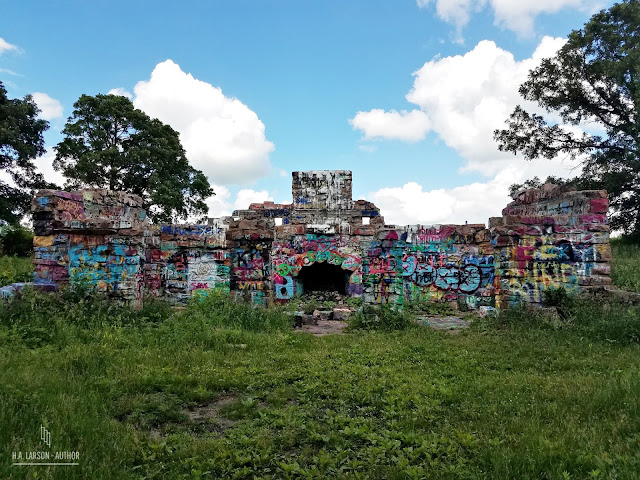 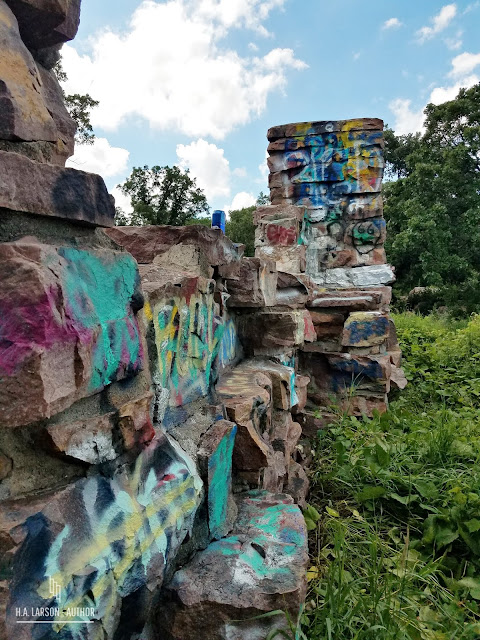 On November 17, 1973, nearly forty-five years ago, Sandra Chesky (then 13 years old) went to Gitchie Manitou with her boyfriend, Roger Essem, his friend, Stewart Baade, Stewart's brother Dana, and another friend, Mike Hadrath. They intended to build a bonfire, smoke a couple of joints, play the guitar, and just have a fun evening hanging out. Instead of the idyllic evening they imagined, their night was quickly, and violently, cut short when brothers Allen, James, and David Fryer confronted the teenagers. Only Sandra would make it out alive - after being held hostage and violated for a few days at a farmhouse in the area.


For a good re-telling of the story, as well as an interview with Sandra, here's an article about the tragedy, written five years ago, in the Sioux City Journal. Even now, forty-five years later, it is a harrowing tale to read. Nature Girl is 12, a year younger than Sandra was at that time, and it's gut-wrenching to imagine her going through something as horrific as this.

It's no wonder, then, that Gitchie Manitou has a reputation for being haunted. Between those buried in the Native American burial mounds and those murdered here, blood courses its way through the park's veins. Indeed, there's an eerie, almost ominous feel to the park. This is most evident as you stand around the graffiti-marked lodge that is woefully out of place there. While a sunny day, a grayness cut through the light, casting an odd shadow over everything. As I stood on the quartzite outcroppings, looking out over a tree-canopied valley, I could hear water flowing from somewhere below. The sound of it was muffled by the expansive tree cover, giving it an unusual sound that only added to the creepy ambiance. Somewhere off in the distance, a woman playfully screamed. It was muted enough to give me pause and listen before determining it was nothing nefarious, but left me a bit rattled all the same.

I did a quick EVP session in the lodge but didn't hear anything upon playback. As we walked back towards the main trail, I took one last glance back at the old lodge and silently paid my respects to those whose lives came full circle here.