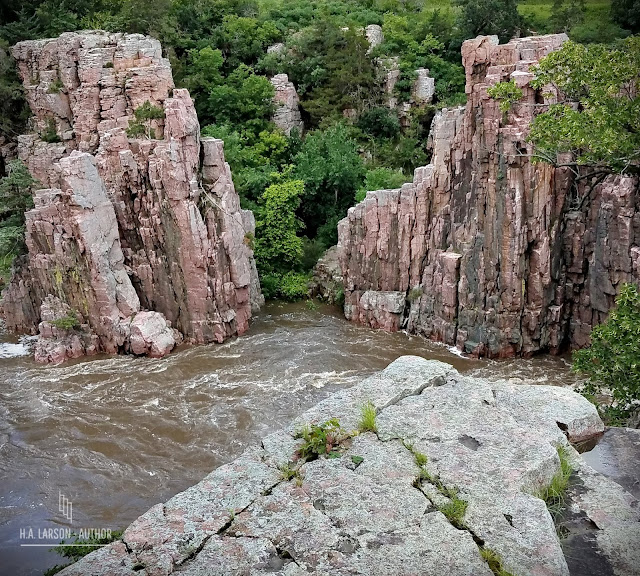 One of the places I was fortunate enough to visit during my vacation last month was Palisades State Park. About a thirty-minute drive northeast of Sioux Falls, South Dakota, this state park is small but mighty. I had read about and seen pictures of Palisades SP earlier this Spring, and it prompted me to want to visit there. It was on my radar, then, for vacation.

When we were on the second leg of vacation, we were in Iowa visiting family and friends, and my Dad took us all to Sioux Falls for the day where we spent a fun few hours at Falls Park. Afterward, we still had plenty of time to kill so we took the short drive to Palisades. Knowing that it wasn't a big park, I wasn't expecting much more than a bit of pretty scenery. It was more than that though and we all ended up being pleasantly surprised. 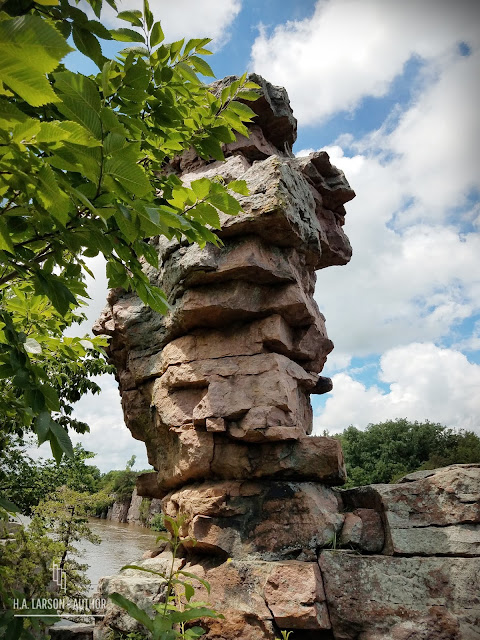 There are four hiking trails in Palisades S.P. The first one is Balancing Rock Trail. So named for this large balancing rock, the trail is the second-longest one there at 0.6 miles. It starts at the top of a ridge and makes its way down to Split Rock Creek, which is nearly as large as a river and runs directly through the middle of the park. 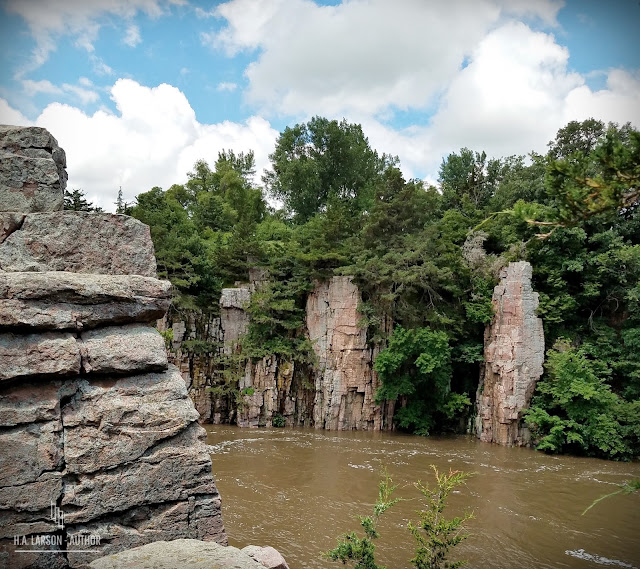 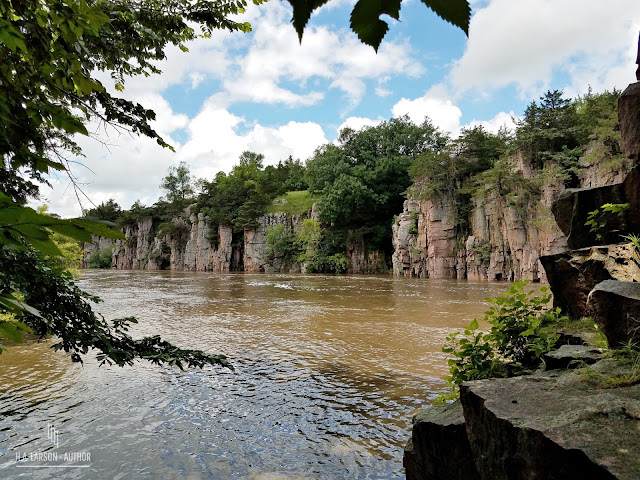 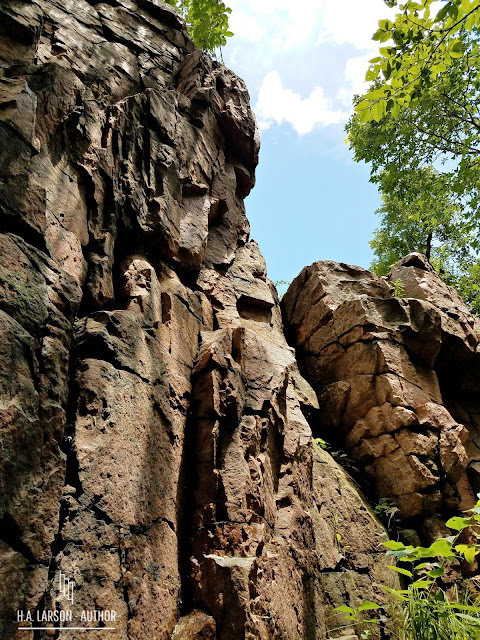 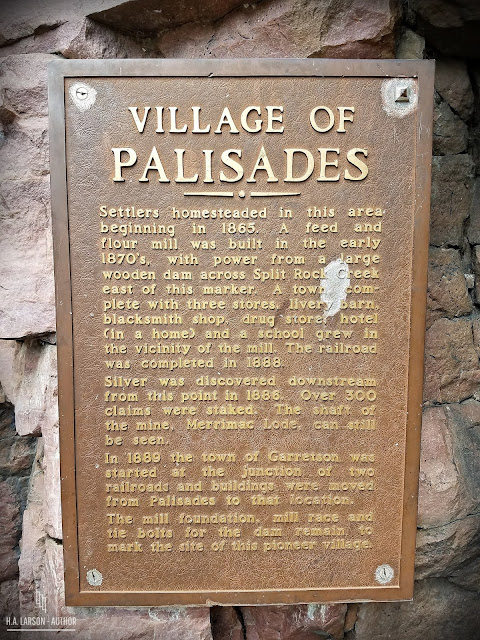 The shortest trail at Palisades is one of the prettiest. Less than a quarter of a mile in length, King and Queen Rock Trail runs along the North wall of the Park and gives one a close-up, impressive view of the two largest quartzite formations at the park: the King and Queen Rocks. This sign along that trail affords a glimpse into the history of the area. Just like Falls Park, the citizens of the area harnessed the power of the creek to power their grain mill. 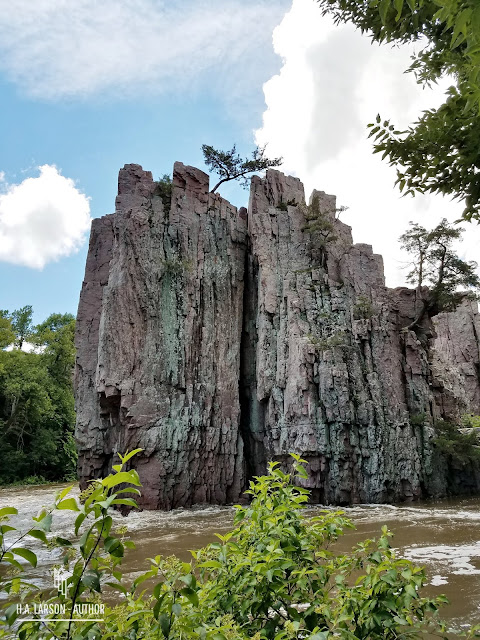 A majestic view of King and Queen rocks. See their "crowns"? It's how they got their names. 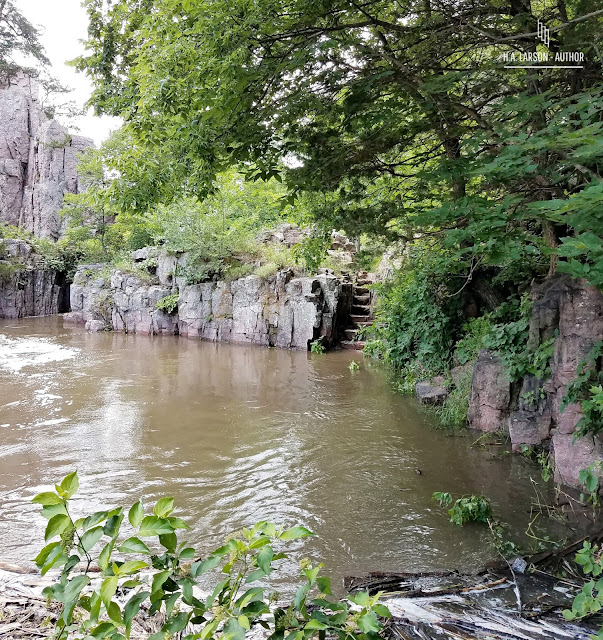 See that set of stairs in the foreground, to the right? Where I stood to take the picture were the steps on the other side. A trail sits between the two set of stairs, but you'd never know it by the amount of water that completely covers it. For the two weeks prior, and during the week of vacation, it rained like it was monsoon season in the Midwest. We needed the rain, don't get me wrong, but flooding was apparent everywhere, and it was evident in Split Rock Creek as well. Every trail at Palisades cut off where the water had risen over the trail, making it nearly impossible to walk along the entire length of any of the trails. We still enjoyed the beautiful scenery all the same. 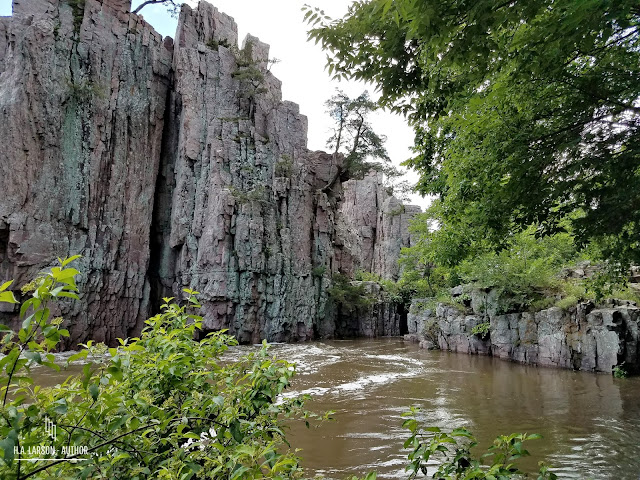 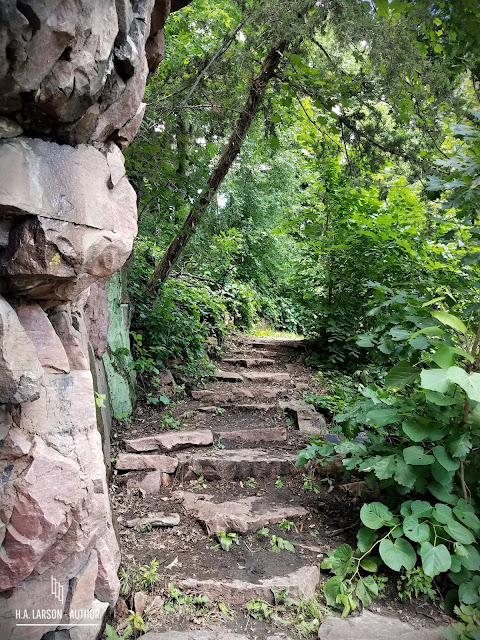 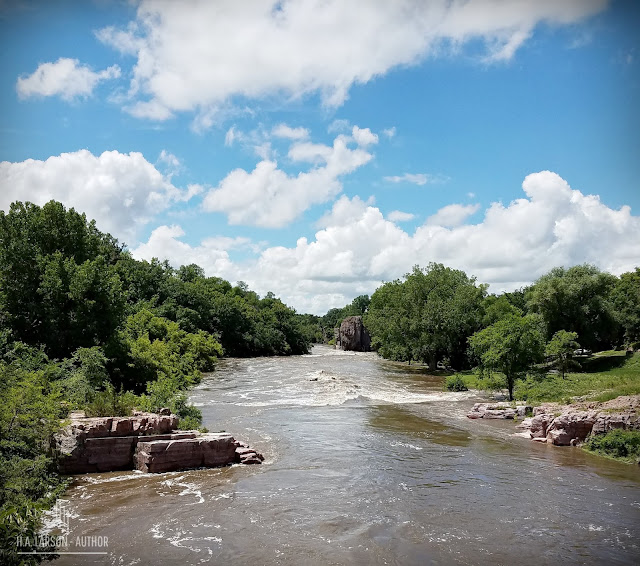 The last trail in the park, Split Rock Creek Trail, is the longest at 1.5 miles. We walked along it until, yet again, it was impassible due to flooding. We were treated to gorgeous sights all the same, and this is an amazing view of the creek as it flows down, past King and Queen rocks, towards the trail.

This park is a fantastic way to spend a quiet morning or a peaceful afternoon. Provided that the trails aren't flooded over, the park is small and it's easy to move from trail to trail. Overall, you can trek just under 3 miles by taking all four trails. The trails are fairly easy to hike so you wouldn't need any special gear, but I highly suggest taking a book and a small picnic spread to enjoy at some point during your trip. It's just that kind of place.

For more information about the Park, including any costs, trail map, hours of operation, and location, go to their website.