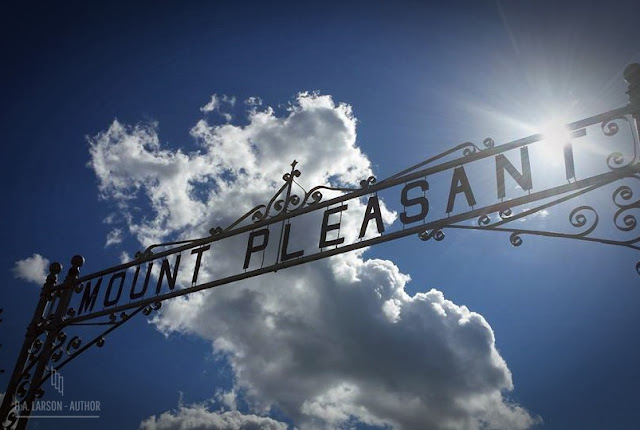 One of the things I did while on vacation was spend a few days visiting my folks. My Dad and I got out a few times by ourselves to go hiking and I really enjoyed spending some quality time with him. We decided to take a trail hike at his former place of employment (he's now retired), so I asked if we could make a pitstop at the old family cemetery: Mount Pleasant. Mount Pleasant is where my paternal grandparents, my great-grandparents, a great-great-aunt, a great-great-uncle, and my twin brother & sister are buried.


Mount Pleasant is not a large cemetery by any means and it's not very well-maintained anymore either. Back in the day, it had a homestead just north of it and a church/one-room schoolhouse across the road. The homestead is long gone and the old church was moved to some fairgrounds, leaving the cemetery to its fate.


This is a baby's grave. This must have been a standard, popular model of child headstone at one time in history because there is a handful of this same headstone scattered about the cemetery. 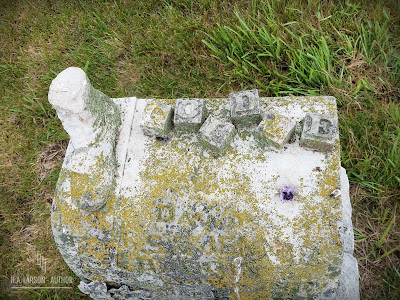 Top of the headstone: Baby Goldie.

Small as it is, Mount Pleasant Cemetery is home to a dark piece of history and its subsequent reputed haunting. This particular headstone marks the final resting place of Martin & Helena (Lena) Schultz. As you can see from the headstone itself, husband and wife passed away on the same day: August 16, 1893.

An older, physically-limited, childless couple, they rented farmland from Lena's brothers and squirreled away every cent they earned. They had a distrust of banks and chose to save their money in hiding spots around their farm, money that they hoped to purchase the rented farm with and live comfortably in their later years. Alas, it was not meant to be.

On the morning of August 17, 1893, a neighbor arrived to help Martin with some farm chores. When Martin never arrived, he made his way to the house where his knocks on the front door went unanswered. As he made his way to the back door, he made a gruesome discovery. There he found Lena Schultz, battered and beaten about the head with a hard, blunt object - most likely a hammer. She had been beaten so badly that six of her teeth had been knocked out and were scattered around her in a two-foot radius. Inside, Martin Schultz was found dead in a small bedroom, his arm covered in defensive wounds. His head was also beaten in with several gashes and holes, some as deep as two inches.

The entire house had been ransacked, with papers and drawers scattered and tossed about the house. The motive, then, was decided on as robbery. Everyone knew that the Schultz's kept a large quantity of money hidden in their home. Unfortunately, it was impossible to know just how much money had been found/stolen, but the police estimated it to be around $300. In today's money, that equals to just shy of $8000, a lot of money for that time. 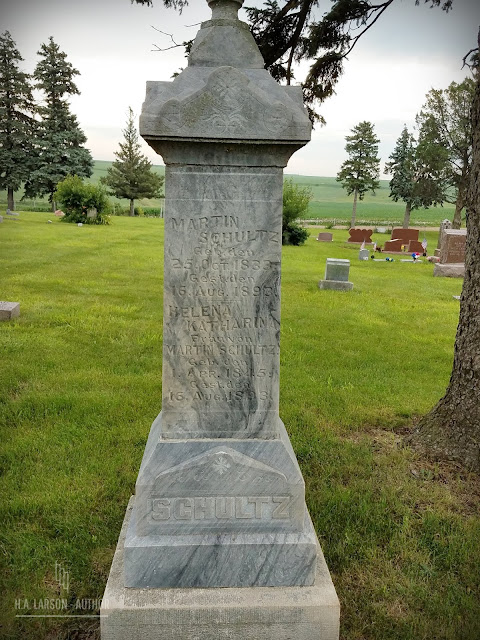 While many suspects were jailed, questioned, and even brought to trial over the years, there was never any concrete evidence to firmly tie any of the suspects to the crime. Even with a $2000 reward offered - money put together by friends, relatives, and the police force of the time - the case, to this day, remains unsolved.

John Williams was the sexton of the cemetery around that time (a sexton is someone who looks after a church, its cemetery, and digs graves), and he became fixated on the granite marker over the Schultz's final resting place. He came to believe that the granite was transforming to reveal a face, or faces, on its side. John was convinced the faces were of the deceased couple and started to spread the word around Cherokee, the closest large town to the area.

Can you see the face - or faces as the sexton believed? The sexton thought the face(s) depicted the victim(s) as they were when they were found: gashes, missing teeth, and all. I can only see one face. 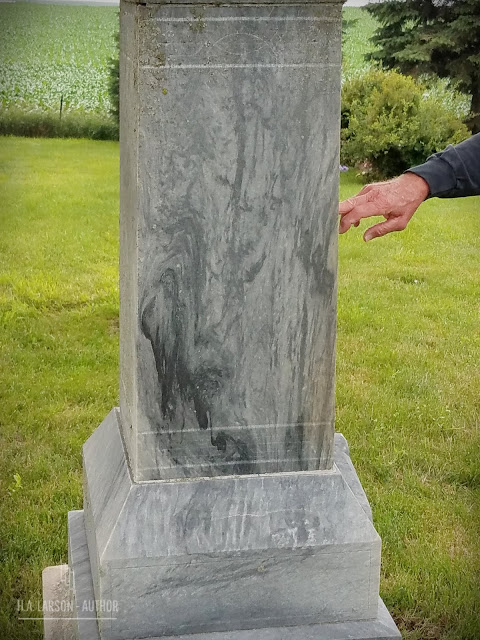 This closer view of the marker shows the face better. It looks like a woman to me, with curly hair, closed eyes, and a deformed mouth. Lena Schultz, if the legend is to be believed.

After John Wilson told the town of his discovery, the cemetery - and the Schultz's grave - became a morbid tourist attraction. The community, still reeling from the heinous crime and it's aftermath, believed that when the face (or faces) fully formed, that the perpetrator would be revealed. 500 people would visit the cemetery each weekend to see the grave, some traveling as far as 25 miles - which back in those days was a long distance to travel.

Eventually, word spread as far away as the east coast, and the New York World sent a reporter and photographer to cover the case. Not duly impressed with the face(s) on the tombstone, they created an oil painting on cloth over wood to take pictures of instead. The vision was a representation of what they thought the killer looked like.

As time moved forward, and no further changes to the granite were observed, interest in the story waned, and with it, the cemetery and the grave. As a child growing up, I knew about the legend from my grandparents and older relatives, who were not as far removed from the tragedy. That homestead that used to be next to the cemetery that I mentioned earlier? It was the Schultz's.

After my generation is gone, the legend of the Schultz's untimely death will be relegated to the annals of written history while it's oral history will die. Does the headstone of the Schultz's depict a face or two? Probably not, but I won't rule it out entirely. I'd like to think Lena Schultz got her one revenge: an image of her mangled, brutalized face to show the world for all eternity.

Or until her gravestone crumbles to dust.