As most of you already know, if anything, I'm about finding adventure, even if I can't stray far from home and/or don't have much money to spare. Yesterday was one of those days. I've been working towards paying off debts and trying to save, so not spending money can be a bit of challenge. I've also been keeping myself busy, and not driving around as much, both of which lend me to being more productive while spending less money. Anyway, I was feeling a bit cabin-feverish, and I know my kids especially were, so I decided to take a road trip going south on Highway 75. The idea was to stop at interesting points along the way, eat a picnic lunch, and then end up at Indian Caves State Park before heading home. 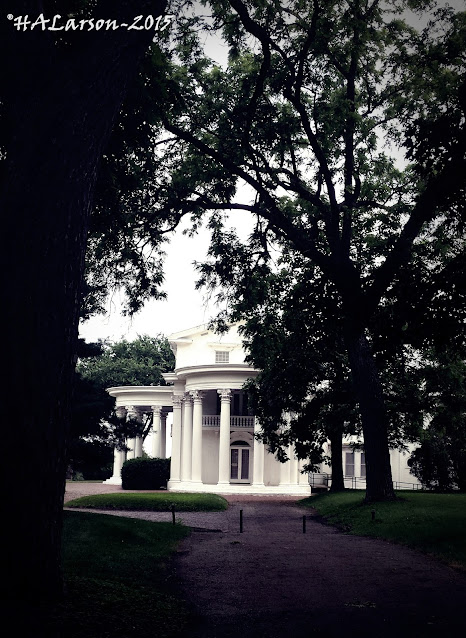 Our first stop on our journey was in Nebraska City, where we stopped at the Arbor Lodge State Historical Park where the famous Morton Mansion sits. The Morton family was the Morton salt family, and they were also famous for encouraging the planting of trees. Here's a view of the mansion from its right side. 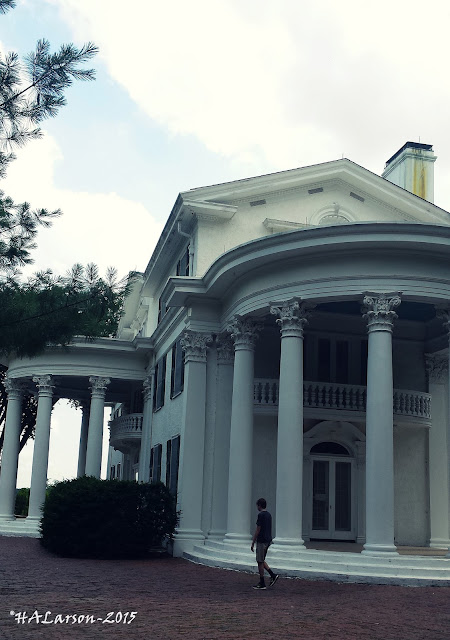 Another view of the Morton Mansion from the left front corner. We had stayed at the Arbor Lodge before, and I've taken the kids to the Arbor farm, but we had never seen the mansion until yesterday. We may not have true castles in America, but we have fantastic old houses like this one. 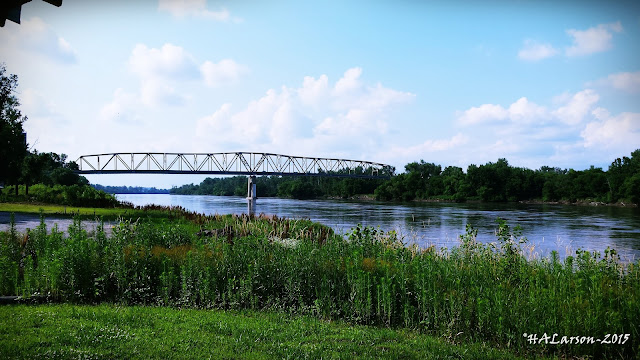 Our next stop was in Brownville, NE, where we stopped at the old Captain Meriwether Lewis boat. It had a picnic area right on the Missouri River with a view of the bridge that crosses over into Missouri. I took this picture from our picnic table. It was a beautiful spot to eat a meal. 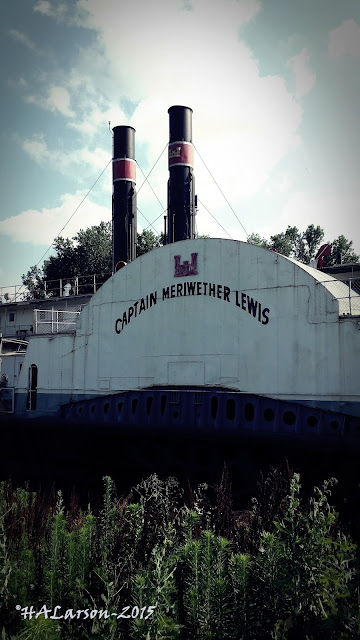 Right behind us was the old Captain Meriwether Lewis boat. It was part of the Army Corps of Engineers, but it appeared to be long since abandoned and even now closed to the public. I believe it used to be open to the public at one point in time. 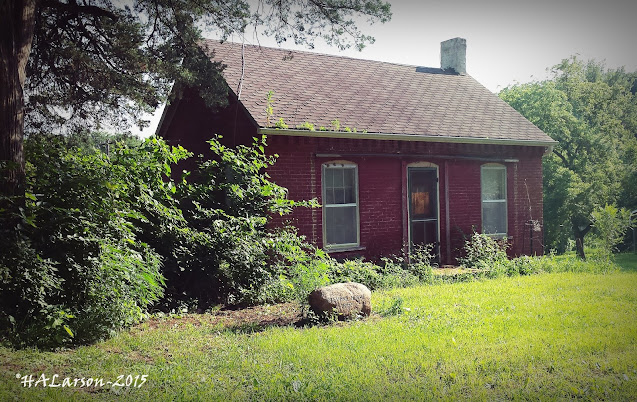 Brownville, NE, was the first town settled/built in Nebraska. As a consequence, this very tiny town has plenty of old buildings, some of which have been preserved. This was the Stevens House built in 1862. 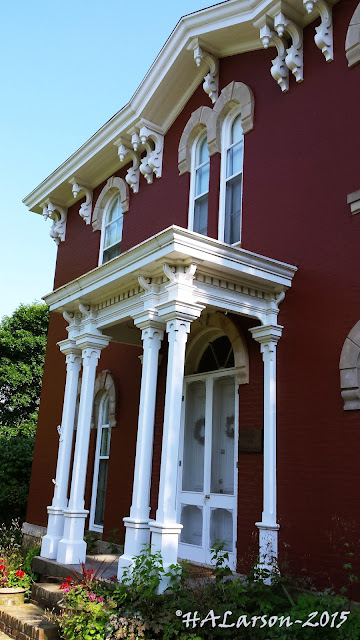 Just down the block and around the corner from the Stevens House is the Muir House. Robert Valentine Muir was the Treasurer for the Nebraska Settlement Co. and ran a sawmill & a ferry. He also published a newspaper I believe, and built this gorgeous home in 1868. 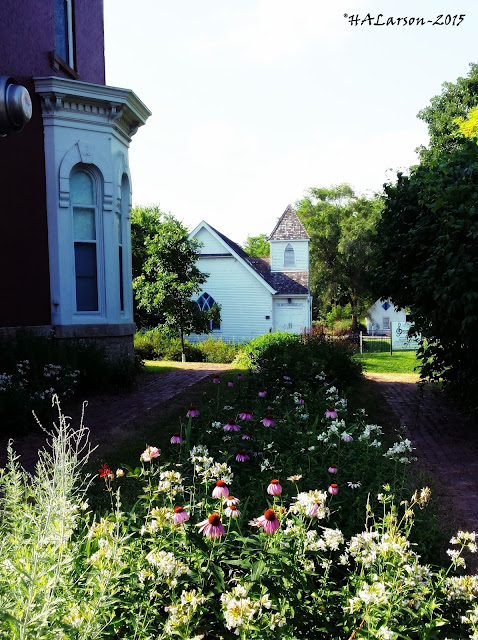 A view of the maintained gardens of the Muir House. Across the way is an old church that is now used as a concert hall. The town, as a tourist spot, has plenty of events, socials, and concerts throughout the warmer months. 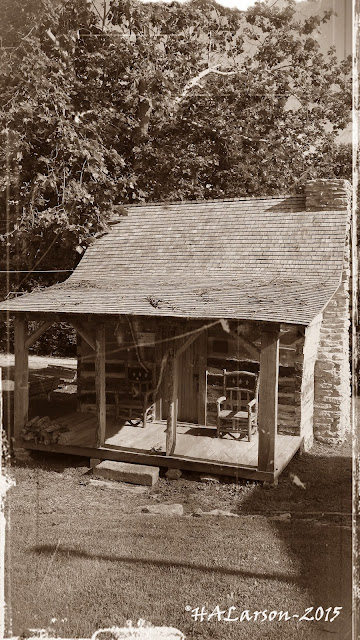 This was a Settler's cabin in downtown Brownville that is mostly original, but has been partially restored. 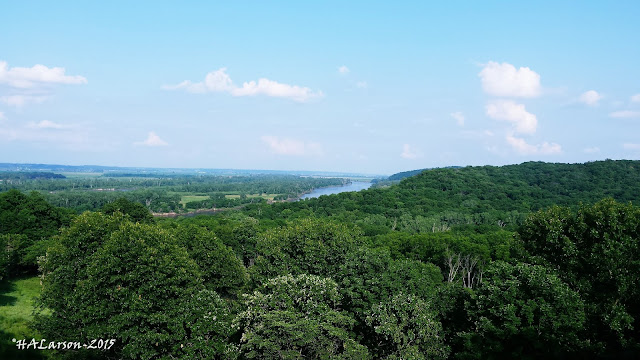 After we left Brownville, it was just another 14 miles to our destination of Indian Caves State Park. I took this picture overlooking the hills and the Missouri River from a beautiful lookout point. Breathtaking! We really wanted to hike down to the namesake cave, but there was road construction and so the last few miles of the road leading to the cave were completely torn up & blocked by machinery. This bummed us out, but we got to walk around, see the Half-Breed Cemetery, and, of course, take in the views! 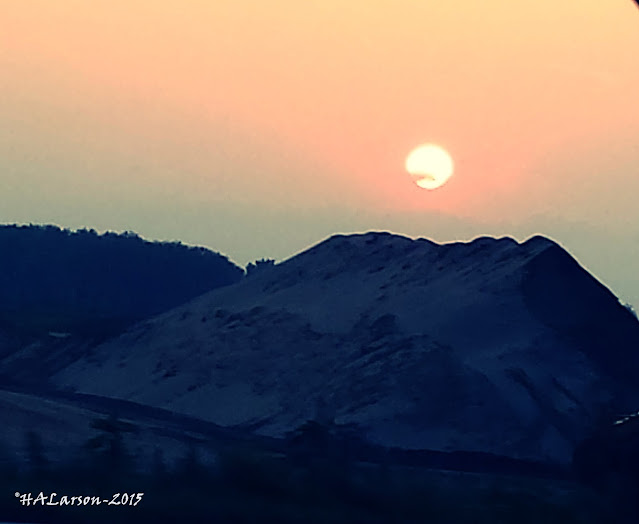 It seemed a perfect end to a perfect day to see a gorgeous, red, setting sun on its descent upon the horizon. We captured a few pictures from the car.

And there you have it, a little view into our fun day of adventurin'. If you're ever bored and need something to do, check around and see what kind of road trip you can take. Pack a lunch and hit the road...you might see something you've never seen before!