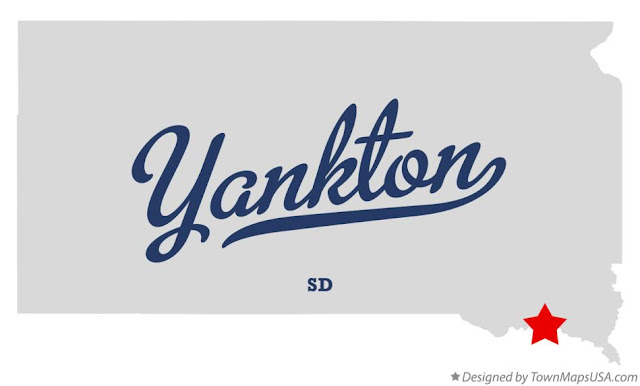 Believe it or not, I labeled this post for later writing in mid-October of last year. By the way, it still feels weird to say last year when last year was literally just days ago. Anyway, like I mentioned in my last post, I have posts that need to be finished and I'm going to finish them, damnit. I'm not a quitter! Well, maybe sometimes I am. I try hard not to be but, alas, I digress.

Back in July of last year, I bought a much-needed and eagerly-anticipated new car. My old car wasn't road-worthy anymore and so traveling outside of the confines of my city just wasn't something I could do. All that changed with the new car and after I acquired it, one of the first trips I made was to visit my dad. Dad, like me, loves to get out for adventures both big and small, and we are both a sucker for a day trip. It came to be, then, that we spent a day in Yankton, South Dakota. 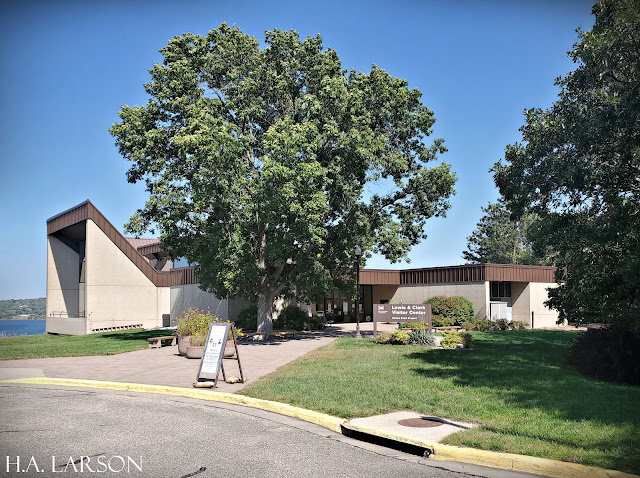 Our first stop was the Lewis & Clark Visitor's Center at Gavins Point Dam. If there's anything I know after living on or near the Missouri River most of my life, it's that there is no shortage of Lewis & Clark waypoints along its banks. This particular one sits on Calumet Bluff, affording one excellent views of the Dam and the River. 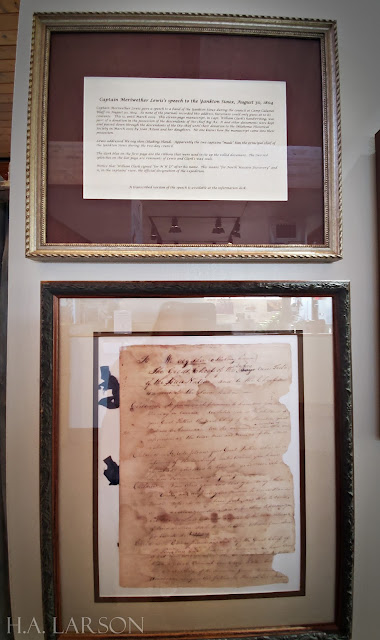 The inside of the visitor's center isn't terribly exciting and is more set up for young kids - having had young kids once upon a time, this is a great thing...if you have young kids. Still, there were some informative tidbits here and there but I found this piece of history particularly interesting. 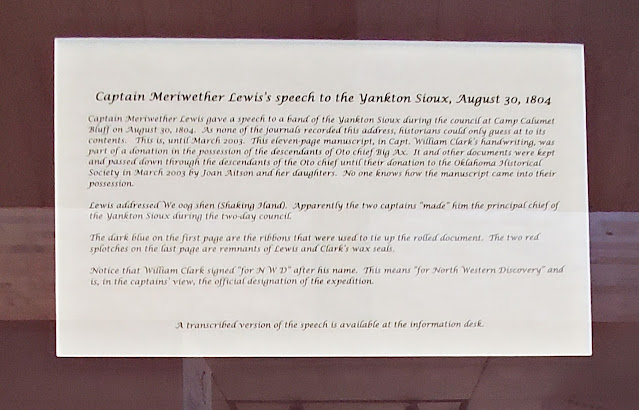 As you can see, it's the actual speech handwritten by Captain Meriwether Lewis during his travels up the mighty Missouri River. This one he wrote to address the Yankton Sioux Tribe.

Of course, the main feature of the visitor's center is to educate and give fantastic views of Gavins Point Dam. There are a few viewing decks on the bluff side of the Visitor's Center, and this diagram helps you to know exactly what you're looking at. 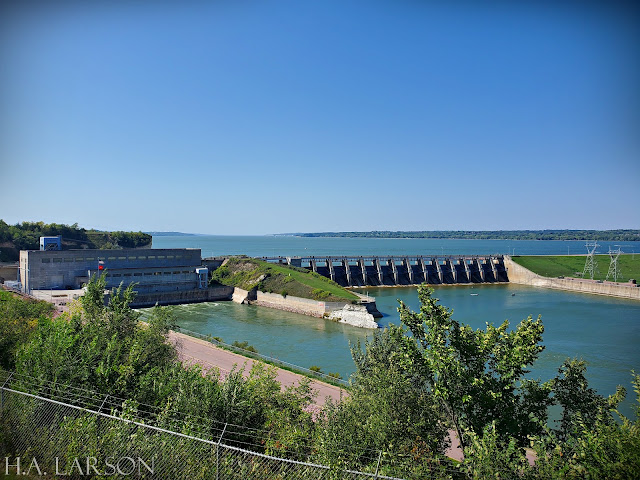 The actual dam. This dam was built in 1957 by the Army Corps of Engineers with the express purpose of conserving, controlling, and using the water resources of the River. 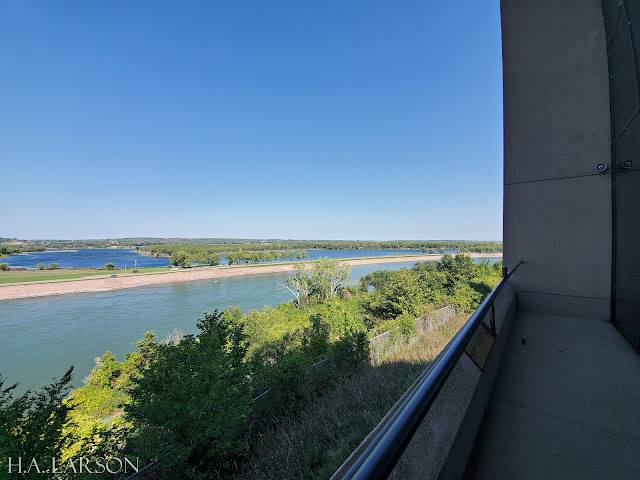 A view from the deck in the other direction. 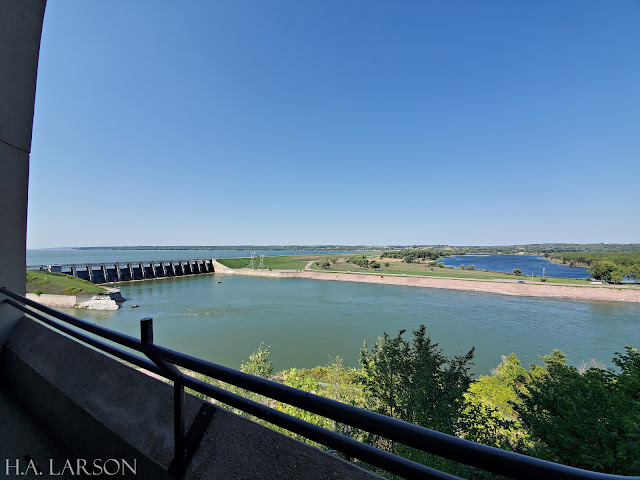 A more expanded view. Just to the west of the dam, the river has been impounded into Lewis & Clark Lake, while to the east of the dam is the much-smaller Lake Yankton. 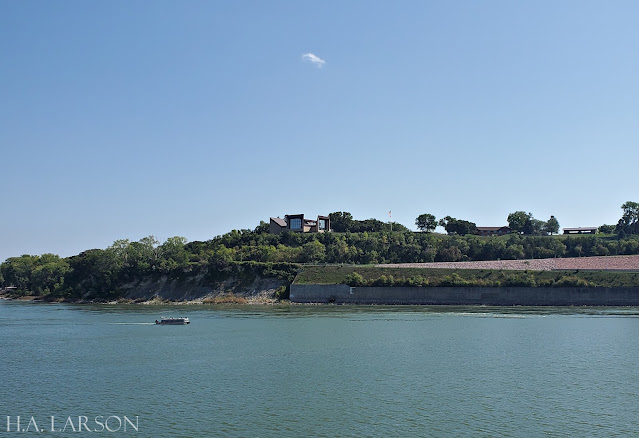 After our time at the Visitor's Center, we made our way over to the other end of the Dam where we could see where we had just been. 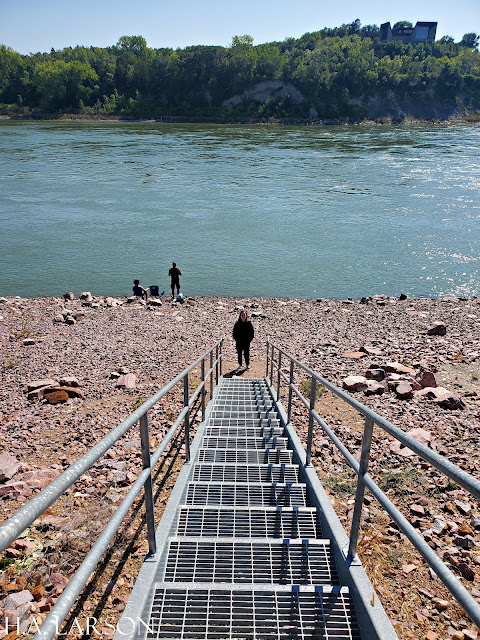 There are a few of these long, metal staircases that will take you down to the manmade, rocky shore. 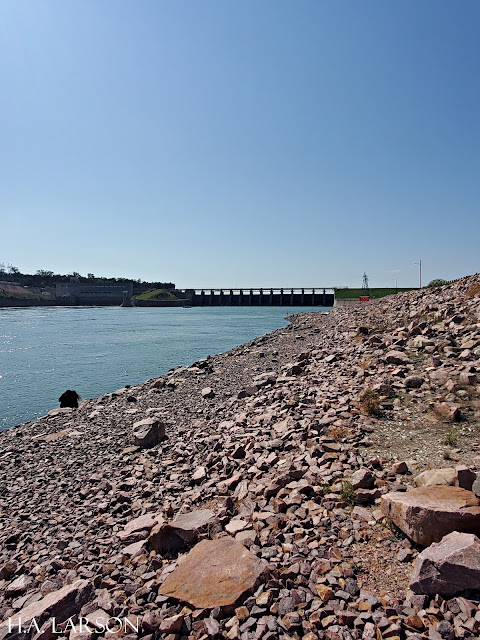 A view of said shore down to the Dam. After this, we made a brief stop just a short trip down the road to see Lake Yankton. It had a small roadside park and a trail that goes around at least part of it. 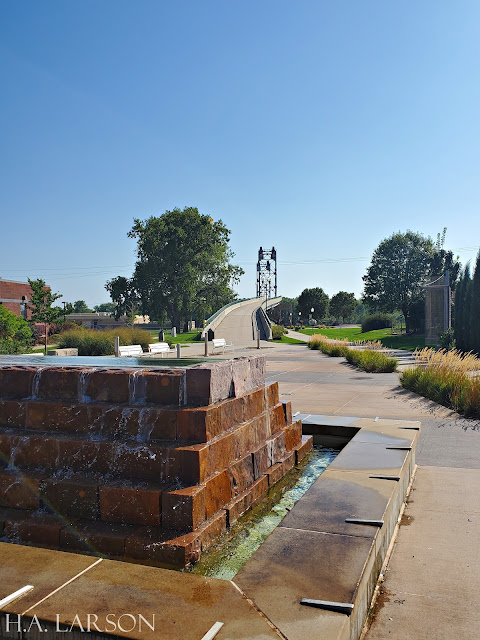 Our next stop was at the Meridian Bridge. Built in 1924, it's a double-decker bridge that was designed for car traffic up top, train traffic below, and an expanding portion of the bridge that would allow for riverboats to pass under it with ease. However, the train rails were never constructed so for many years it was a bridge for cars with traffic moving in a one-way manner. The importance of the bridge, and why it was built in the first place, was to allow people and goods to easily move between Nebraska and South Dakota.
Today, it's a unique piece of history that was closed as a vehicle bridge and was reborn as a pedestrian bridge. It's 0.57 miles each way, making the round-trip 1.14 miles. My dad, my daughter, and I decided to walk the entire thing. 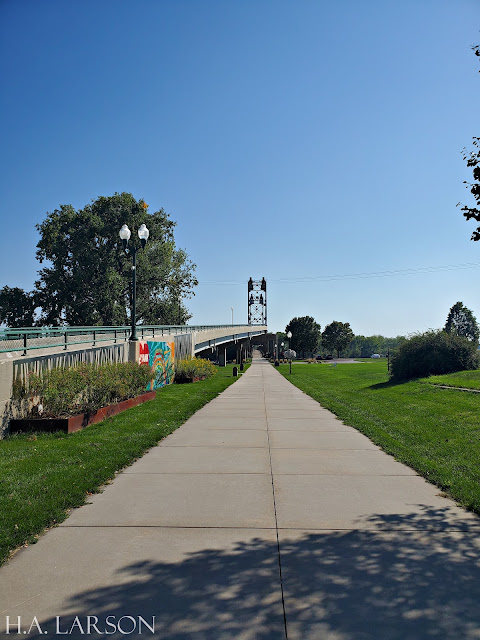 We started on the lower half. 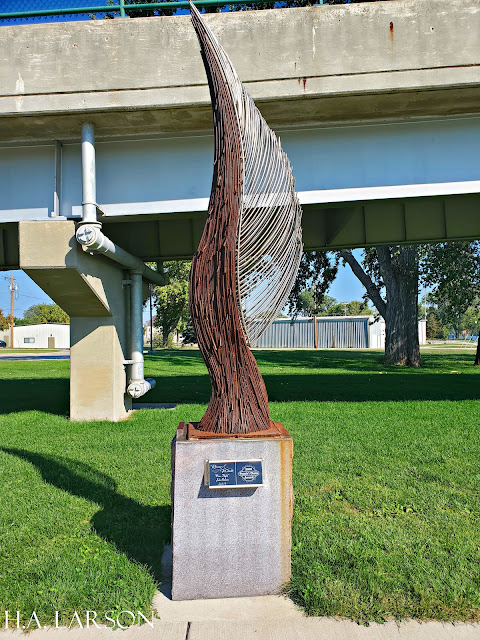 Along the way are some interesting pieces of art. 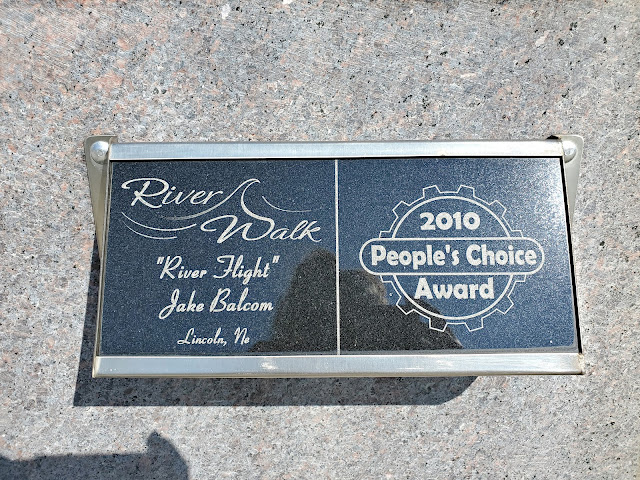 The art seemed to encompass artists from the two states the bridge connects: Nebraska and South Dakota. This article talks more about the artist, this piece, and another piece he created for the town. 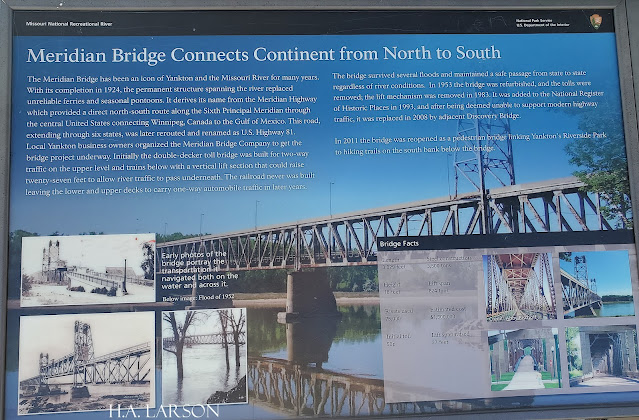 This plaque, placed between art, gives good information about the bridge's history. 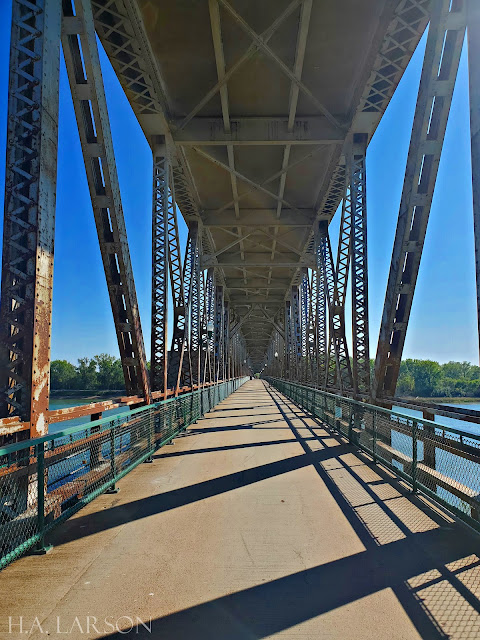 After walking a little way, the trail moves directly under the top portion. It's a neat perspective to see in person. 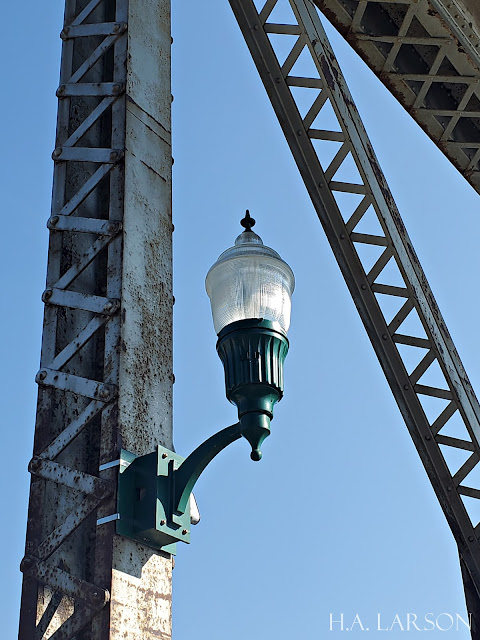 While the lamps that adorn the bridge look old, they are definitely much more modern. They just look older and I think that's cool. 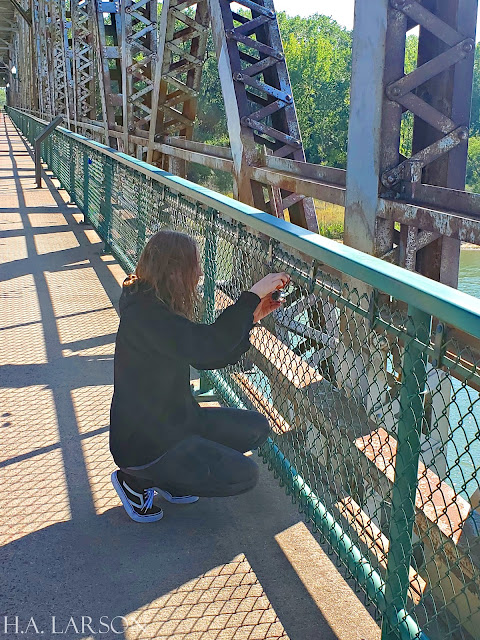 Have you ever heard of the Pont des Arts? It's a pedestrian bridge that crosses the Seine in Paris that people would put locks on the prove their love for one another symbolizing the unbreakable nature of it. While it's now forbidden by law to put locks on the Pont des Arts, you can still put a lock on the Meridian Bridge. The locks can also symbolize good luck, so here my daughter attaches one. 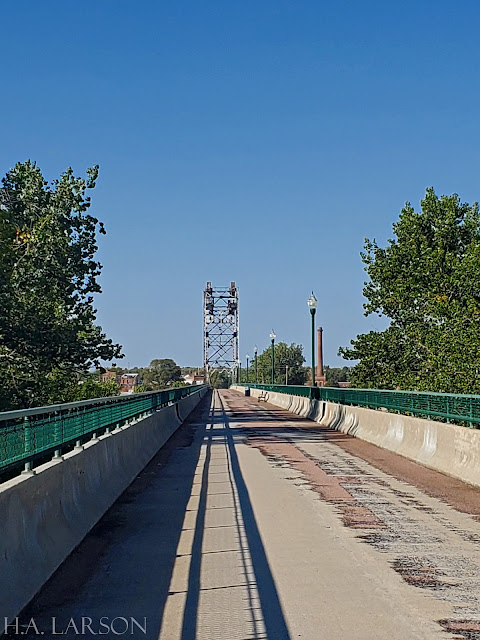 After meandering the bottom section, we finally made it to the top section. 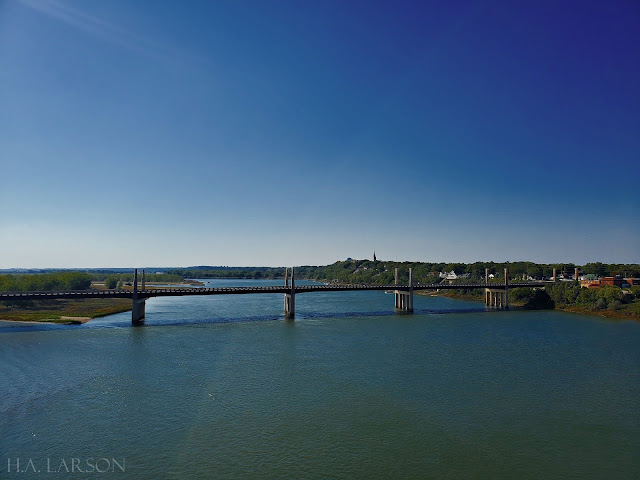 The top portion of the bridge really allows you to see for miles. This bridge in the foreground is the one built to replace the Meridian Bridge for motor traffic. 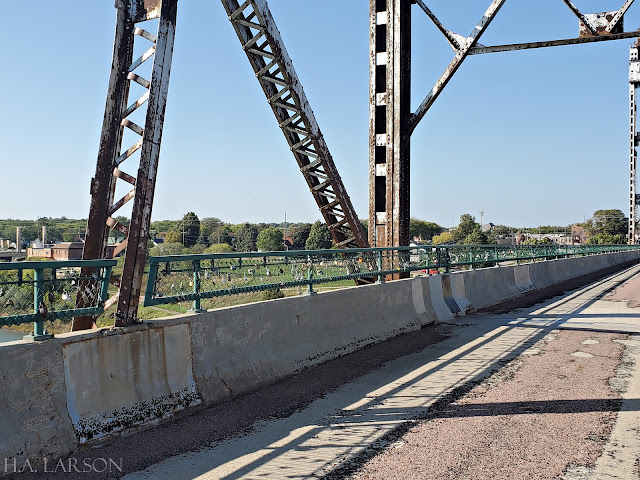 The number of locks on the top section of the bridge far outweighed the locks on the bottom section and we definitely spent some time checking the various locks out. They came in all shapes, sizes and were often spread out in patterns (like two big locks for parents with smaller ones surrounding those for their children) or engraved. 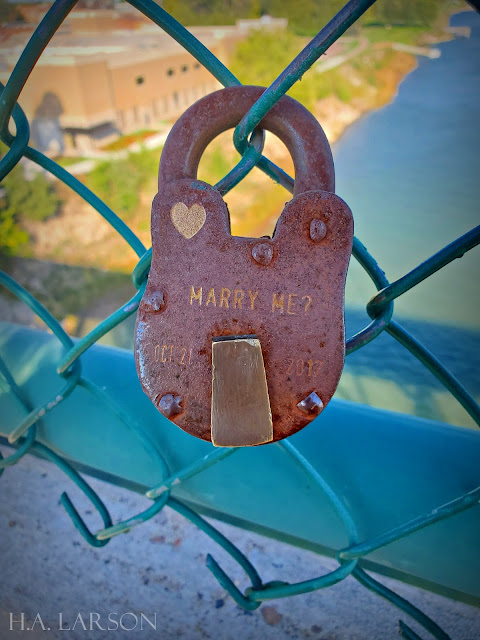 Case in point. While I'm definitely jaded on marriage (haha), I thought this must have been an interesting way to propose.
After this, we drove the short distance over to Riverside Park - a large park that is exactly what it sounds like. We packed food and drink so we ate a late lunch while taking in all the people enjoying a nice summer day along the River.
It was a nice way to spend a day. Even though Yankton isn't terribly far from where I grew up, I think I've only been there one other time in my life and that was for a band competition back in high school. While there's not a ton of stuff to do there (we visited four of the top eight things to do), there are a few other things to check out if you ever decide to visit the town yourself.
I hope you have a great weekend! The weather is going to be considerably warmer today, so you can bet that I will be outside somewhere at some point.
Labels: Adventures in Travel Musings The Great Outdoors