Remembering Ireland: The Cliffs of Moher & the Burren

Good morning, and welcome back for the second-to-last installment of Remembering Ireland. This is all about my visit to the Cliffs of Moher and The Burren, something I started last week with a glimpse of Corcomroe Abbey. I'm going to warn you now, this post has more pictures than any other post I've done in the series, so it's a bit long...but more pictures than words and completely worth looking at. Let's get started! 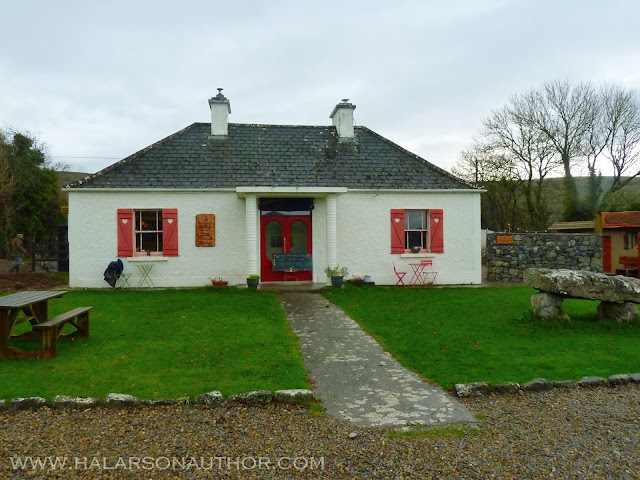 After leaving Corcomroe Abbey, it began raining again as we swung back by Hazel Mountain Chocolate Farm to pick up the rest of our tour party. If you remember, they had taken The Burren hike (which you can just see here behind the farm). We then made our way to the Cliffs of Moher. 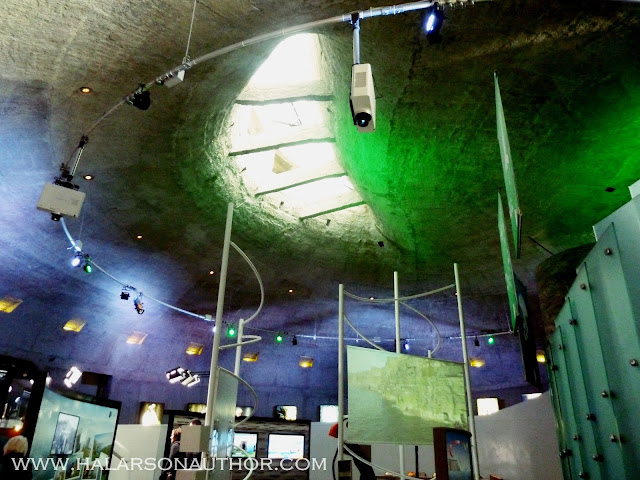 The unique visitor's center at the Cliffs was really neat. The highlight for me was the 3-D movie they show in their little theatre. 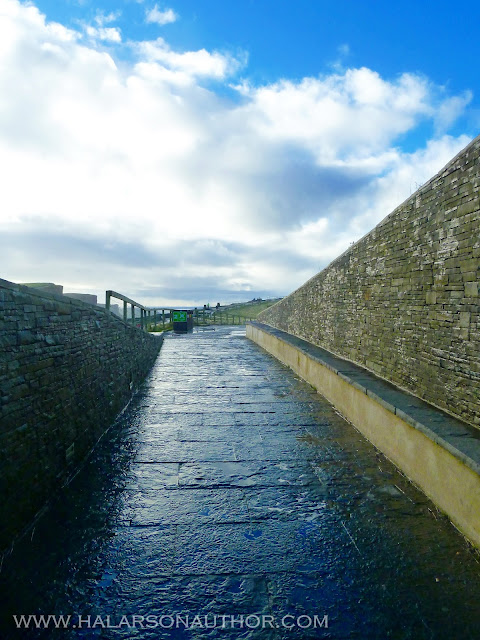 Just as it had earlier at the Abbey, the rain stopped when we arrived at the Cliffs. It was like kismet that we lucked out all day when it came to the rain, and it sure did help to make this day one of the best days of my life. Here I am leaving the VC to go to the Cliffs. 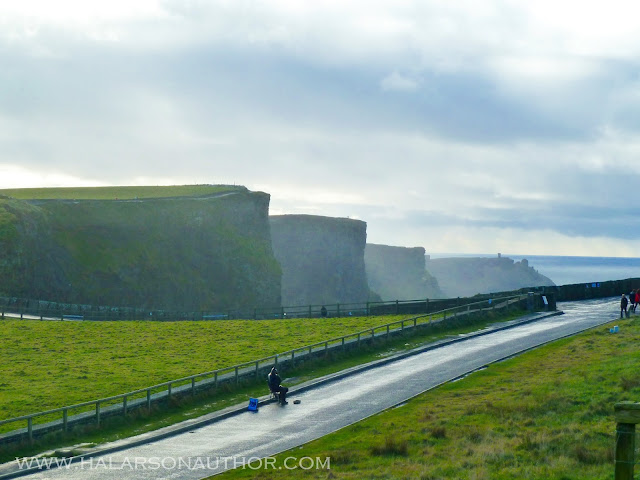 Wow. Even now, when I look at these pictures it fills me with a sense of awe. There's nothing quite like actually being there, but these pictures do it a fair amount of justice. 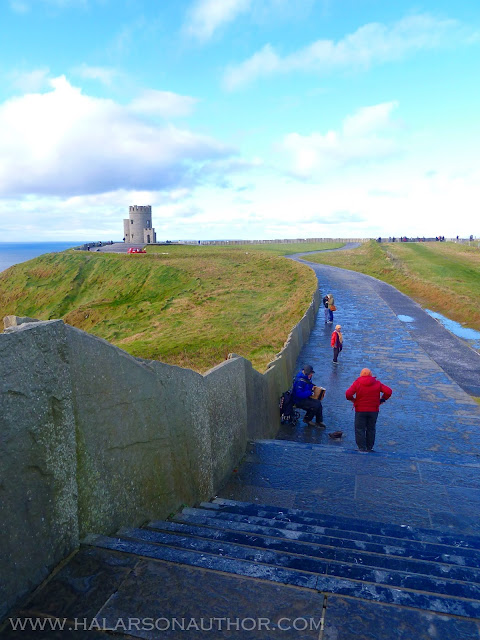 There's plenty of coastline here to explore, so I saved the iconic Cliffs for last, opting to turn right and check out everything down that way. You can see the old guard tower, O'Brien's Tower, and that was my next destination. 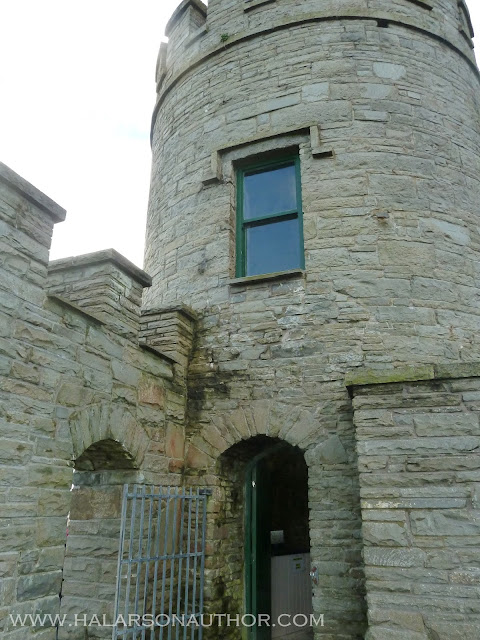 A view of the old guard tower. Irish kings, back in the day, would put these guard towers on the edge of the sea to keep an eye out for marauders. 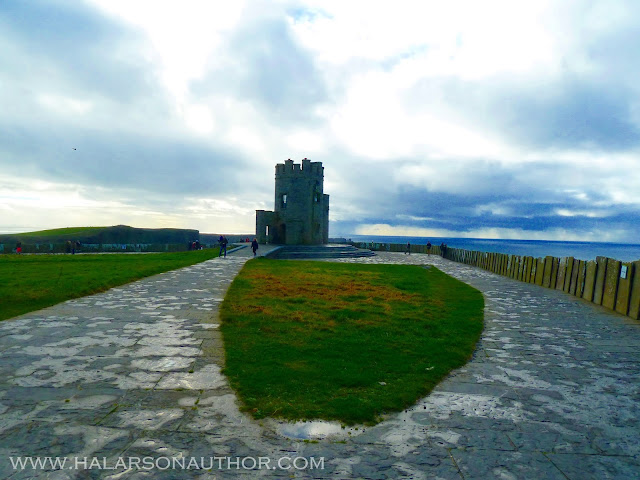 There's a charge to go up inside the tower, so I chose to skip that part...I was there for the nature anyway. 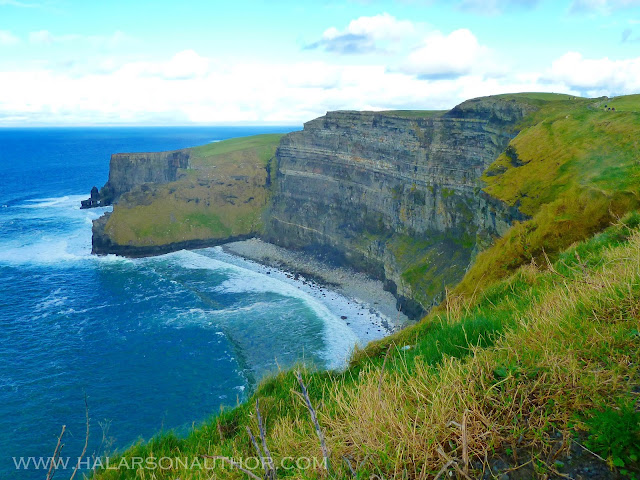 Right where the property line ends is another cliff. Not quite as striking, but still amazing nonetheless, I took many pictures and admired it all the same. 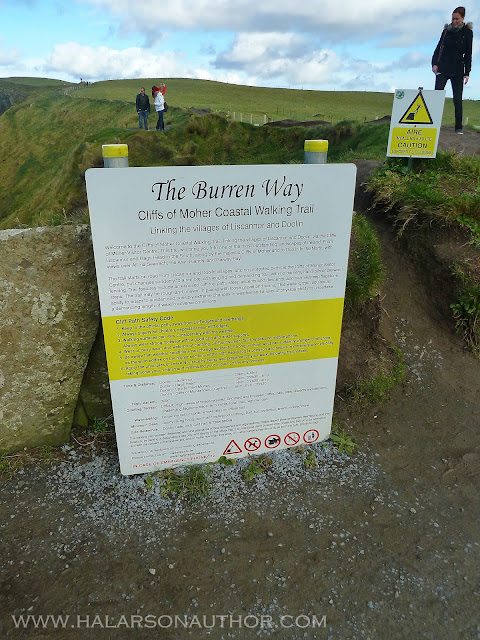 Right next to this cliff, and the aforementioned property line, lies The Burren Way. You can walk 114 km along this trail, if you so desire. The scenery would be something else. 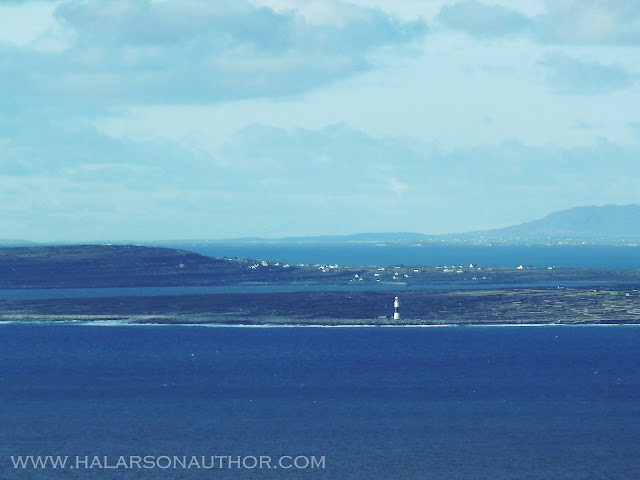 I slowly began to work my way back left, towards the Cliffs, and I could just make out the Aran Islands in the distance, over the ocean. I zoomed in on them and was able to get a decent picture. You can see a lighthouse and some buildings. 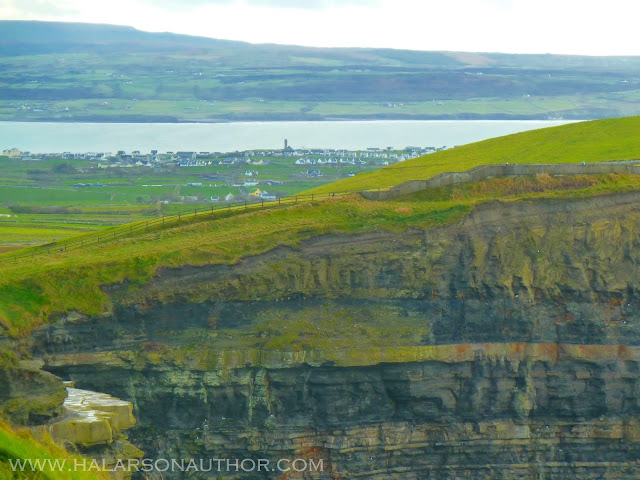 I arrived back at the Cliffs and snapped a picture of the little village that sits on the other side. 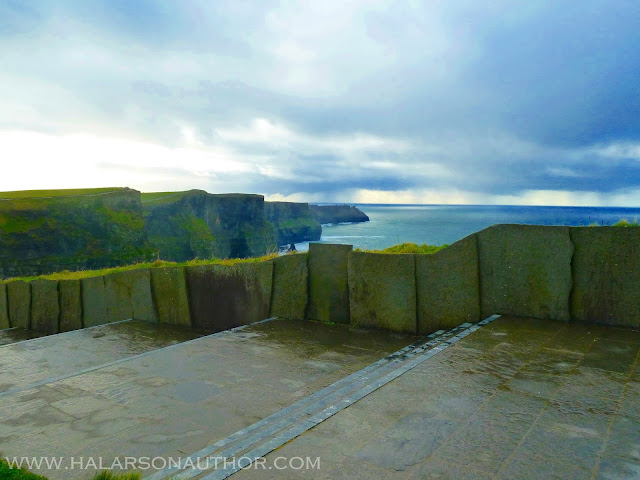 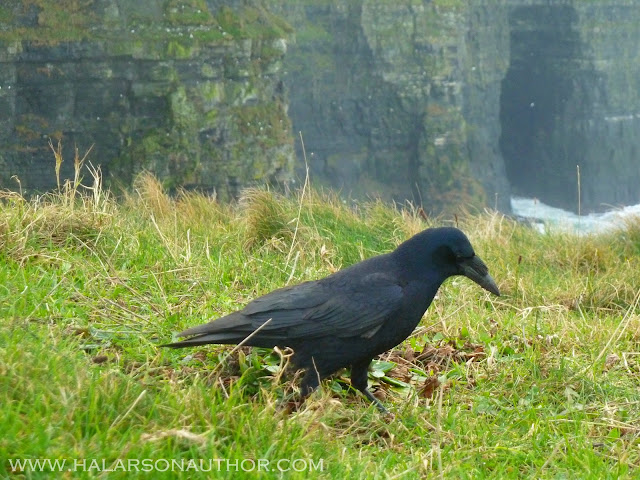 I got a good close-up shot of this little visitor. 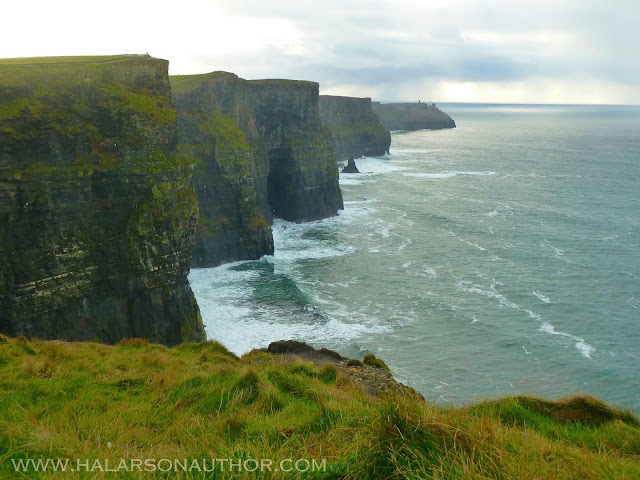 And here we have the money shot: The Cliffs of Moher. I stood here and just took it all in for a few minutes: the wind blowing, the sound of the waves crashing against the shore, the birds singing, and the smells of the sea & earth. It was an incredible moment for me, and it's etched into my memories. 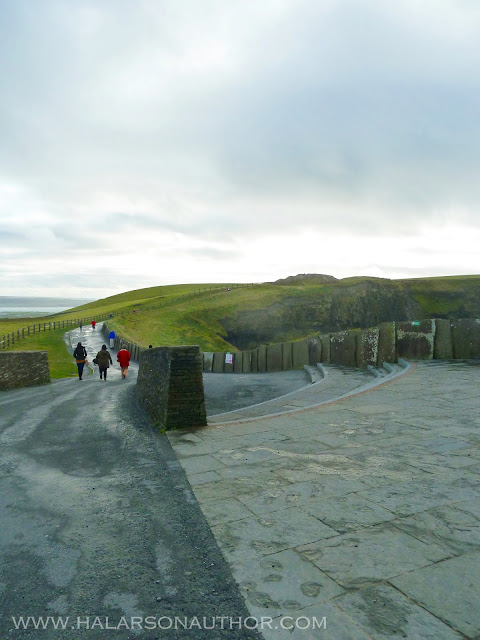 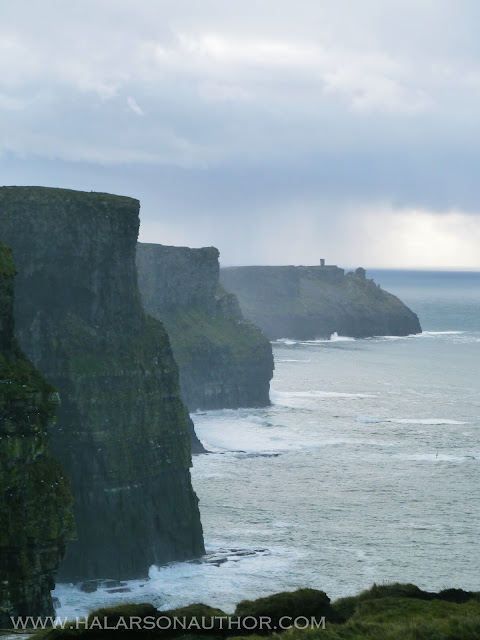 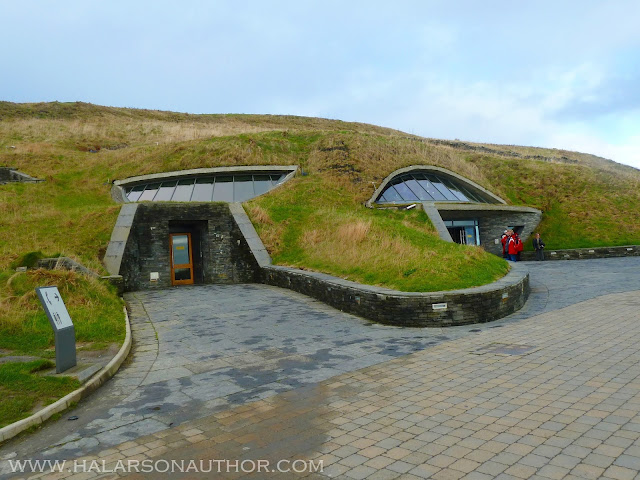 The outside of the Visitor's Center. Even it's cool! 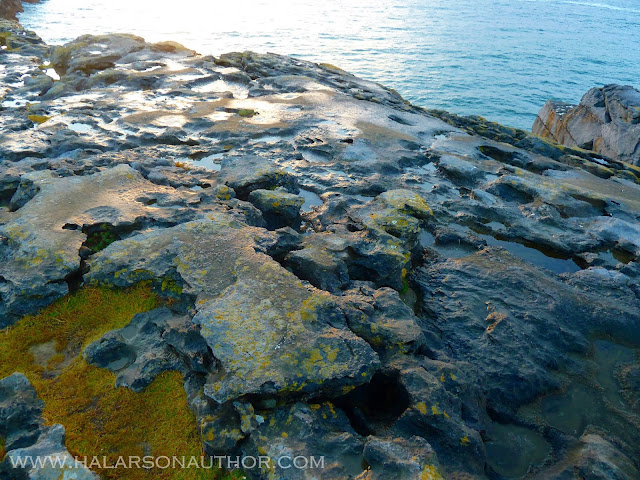 We left the Cliffs and were told by our tour driver that we would make another ocean stop along The Burren where we would get more gorgeous views. He wasn't wrong. This picture showcases perfectly what The Burren is actually made of: great rock, which is what The Burren translates to. 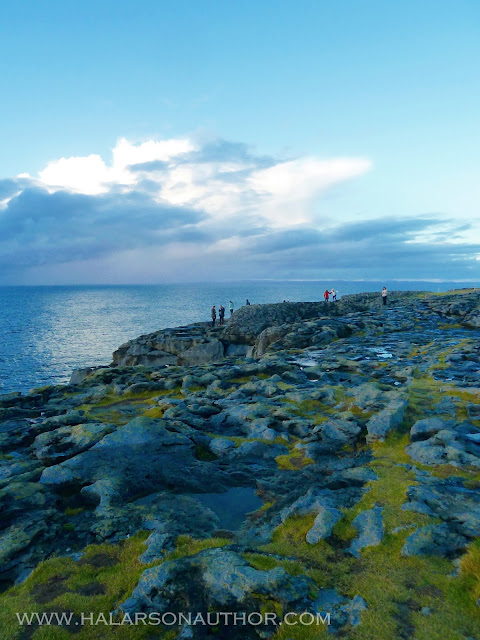 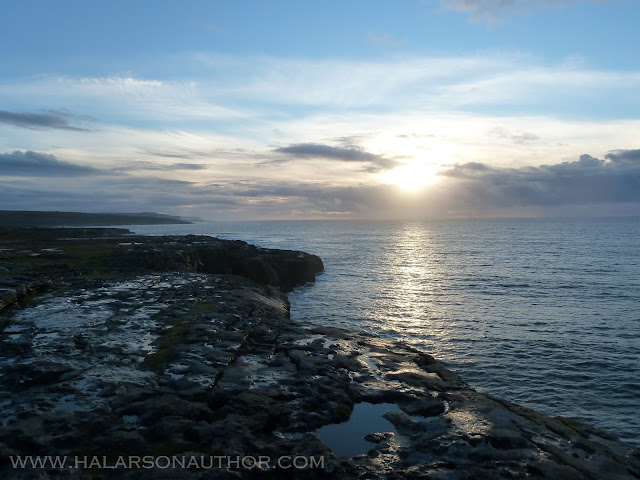 I stood here, much like I had at the Cliffs earlier, to soak it all in and admire the scenery. The setting sun was gorgeous. 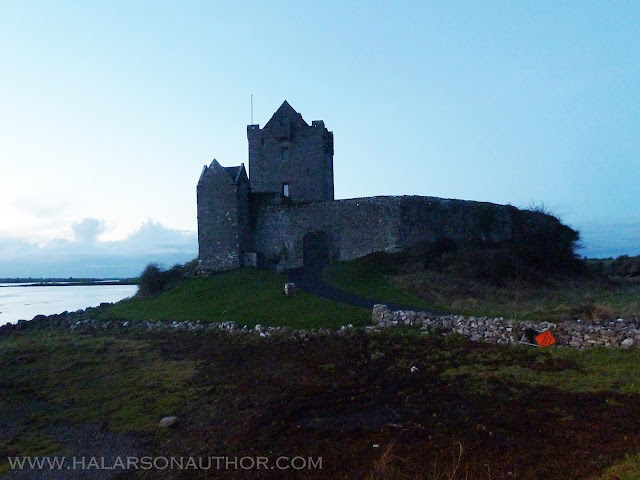 We made a quick photo-op stop here, at Dunguaire Castle. Built in the early 1500s, it still stands watch over the Atlantic. I had to brighten this picture up quite a bit in order to see it as it was quite dark by this time. 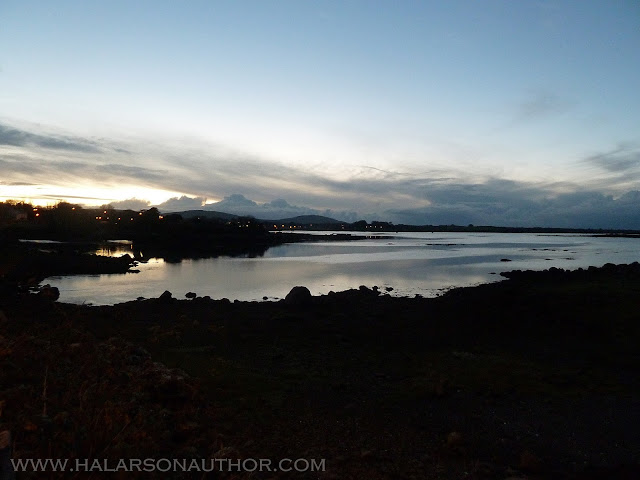 One last look, and it's just a breathtaking as it looks. I snapped it by turning opposite after taking the Castle picture.

We arrived back in Galway, exhausted but exhilarated. We left the bus station and walked down to the corner by Eyre Square, where we had a Guinness at Garvey's Select pub. Afterwards, we went back to the hotel, cleaned up, then headed back downtown to do the traditional tourist thing: the iconic shops of Galway. Honestly, after seeing the majestic beauty we had all day long, hanging out around all the colorful-fronted shops wasn't all that exciting for us. We saw it all though, and grabbed a bite to eat, before heading back to the Clayton Hotel. The next morning we got ready, packed up, and headed back down to the train station where we boarded a train back to Dublin for our last night in Ireland.

I'll be back next week with my last post in this series where I'll talk about our last night in Ireland, my thoughts on the trip, and some neat random photos, so make sure to come back!

Until then, have a great week my readers,