Good morning! It's Monday, and we have three more installments of Remembering Ireland to go. Let's get this one going.

After all the hectic, but wonderful, touristing we did in Limerick on our one full day there, we landed in bed that evening exhausted. That's not to say we didn't round out our time there well, because we had a late supper at the Bar & Grill on the second floor of the Absolute Hotel (where we were staying). The next day we packed up and made our way to the train station, although this time we walked instead of catching a cab. It wasn't that far and it saved us some money.

This train ride was much shorter than the one from Dublin to Limerick, but it was less crowded and we had a relaxing and enjoyable time traveling to Galway, the next leg of our trip (if you'd like to see a clip of our train ride between Limerick and Galway, I posted about that a while back here). In Galway, we stayed at the Clayton Hotel, which is actually a good way away from city centre and the train station. Luckily, Galway has a decent bus system and we were able to get back and forth without a problem. We checked into the Clayton and that evening we grabbed some supper in The Enclosure Bar and Bistro, located in the lobby of the hotel, and then wandered across the street afterward to the Briarhill Shopping Centre where a Dunnes Grocery Store was located. We picked up goodies for us to eat to save a few more bucks on this leg of the journey (especially since this was the only hotel where we got complimentary breakfast), and enjoyed walking around seeing the differences between Irish grocery stores and American ones.

After a good night's sleep, I was anxious to head downtown as I had decided on taking a bus tour to the Cliffs of Moher. We had passed by a Lally bus tour shop after we arrived in Galway, so we headed downtown on the city bus to book our trip there. We were pleasantly surprised to find the girl working behind the counter to be an American, but we also heard an American talk on his phone during our bus trip back to the hotel that night, so Galway must be a place to live for young Americans. Anyway, I'm glad we booked with Lally, as it was advantageously perfect for us that day. We walked down the block to the main bus station and boarded our tour bus, which was much smaller than the other tour bus lines. There were only ten of us on the tour bus: me, my best friend, a German girl, and seven Italians.

Our first stop was at Hazel Mountain Chocolate farm. Nestled in the Burren, this 300-year-old farm gives tourists a hiking detour up in the hills of the Burren. As I had sprained my knee on the Bunratty Castle stairs, I elected not to take the hike, as did my best friend, and the German girl. The bus driver told us that since we weren't taking the hike that he could drive us down the road to Corcomroe Abbey for a quick visit, so we jumped on the chance. 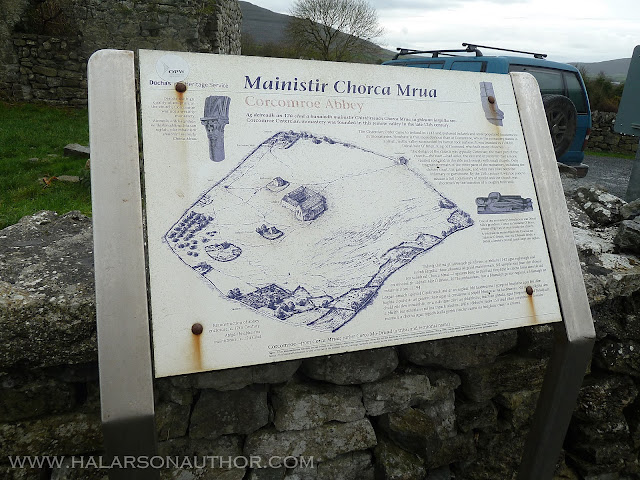 Corcomroe Abbey was a monastery that was established, sometime in the early 13th Century (1205 approx.), by Cistercian monks. Tucked away in the Burren, it's not far from the Cliffs of Moher. Now, I have to tell you that this entire day was a stroke of luck from the get-go. It rains frequently in Ireland, and this day was no different. However, it stopped shortly after we arrived and stayed away until right before we got back on the bus. Incidentally, when we got back to our bus, three larger tour buses pulled in while the rain came pouring back down. Not only did we get relief from the rain to see this beautiful place, but we didn't get overrun by the massive influx of other tourists that stopped there as we were leaving. Lucky, no? 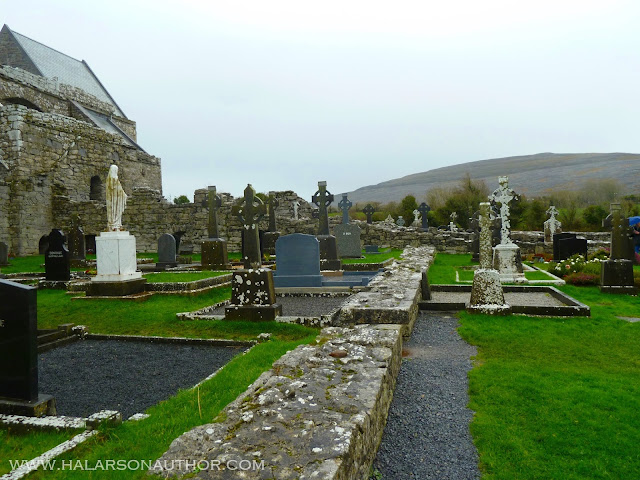 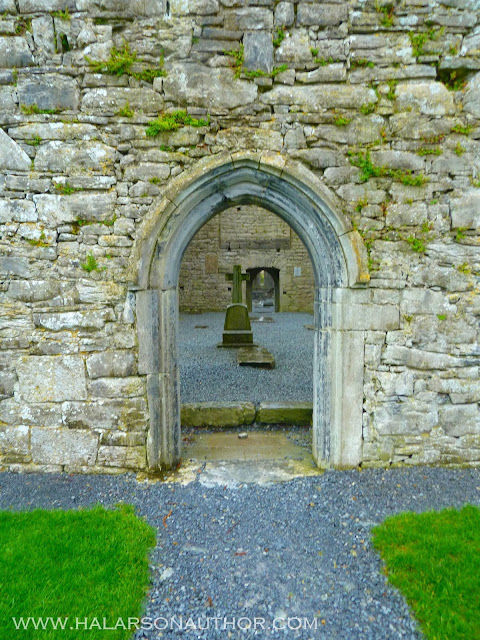 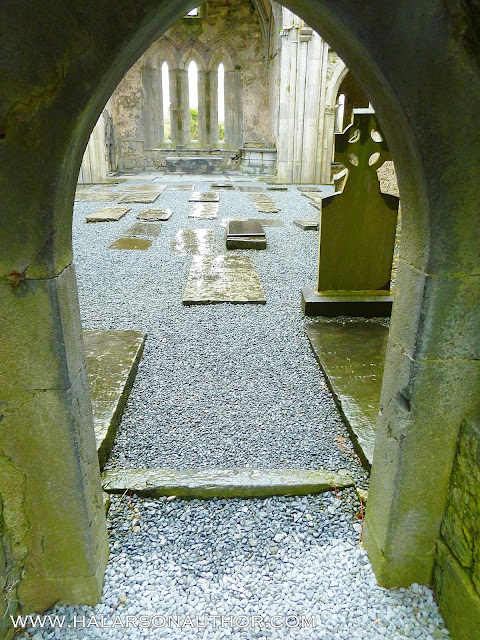 The ground, inside and outside the Abbey, are filled with graves. 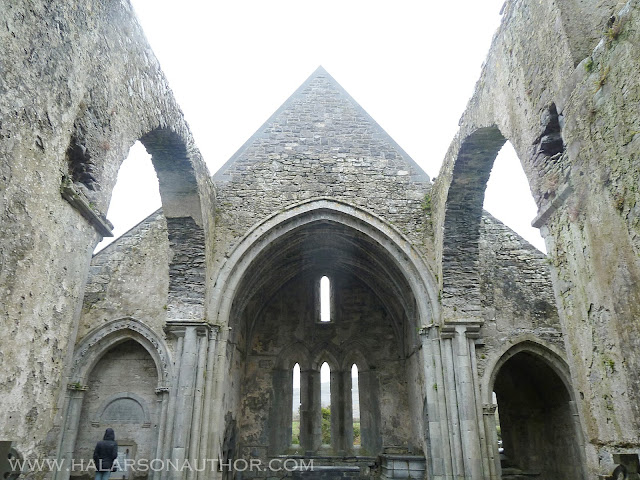 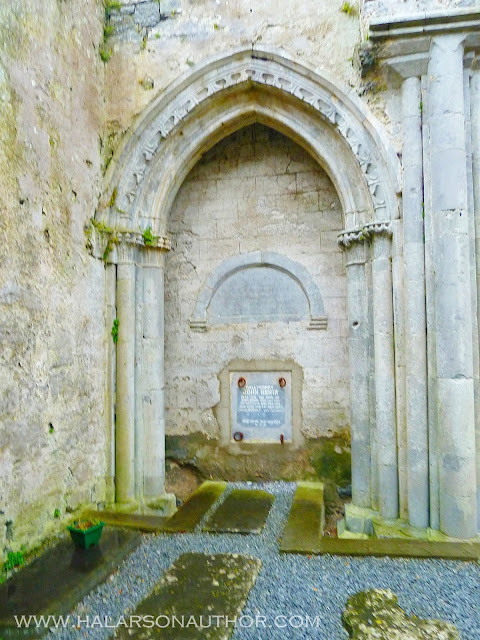 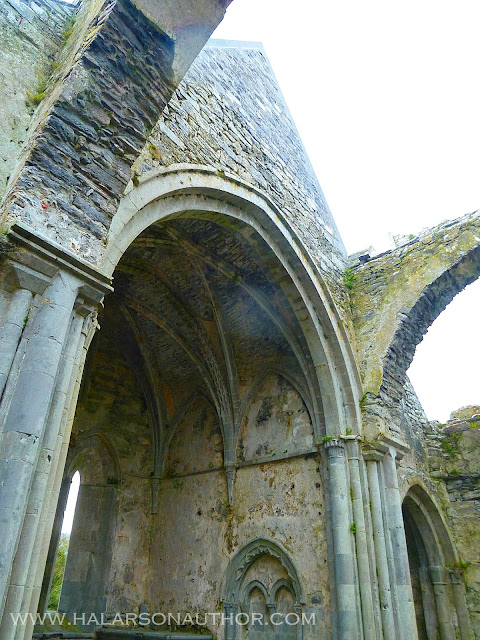 Just look at that Romanesque architecture. 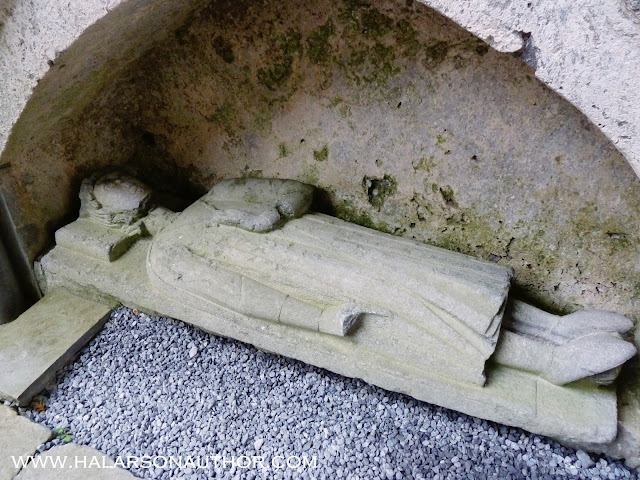 The tomb and effigy of King Conor na Suidane Ua Briain, the person that legend dictates commissioned the structure.

This was an amazing experience, and while I'm a bit sad to this day that I missed out on the Burren hike, I'll never be sad that I got a wonderful, mostly-dry, private view of an ancient piece of Irish history.

We are down to just two more installments -- just two more Mondays -- of Remembering Ireland. Next Monday, we'll dive into the majestic beauty of the Cliffs of Moher. Until then, have a great beginning of your week!