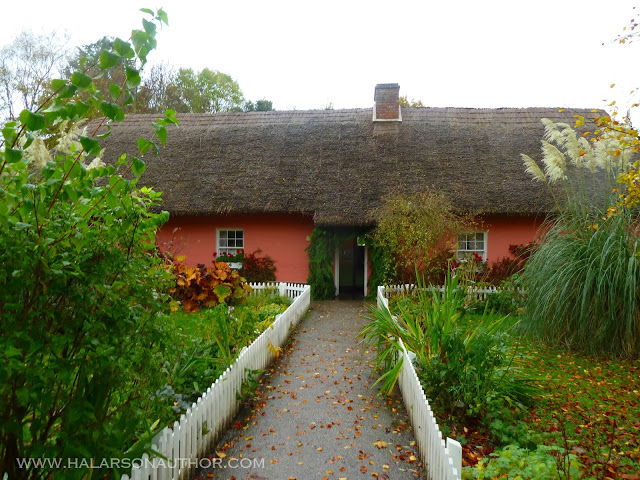 Good morning, and welcome back to Monday! As has been the case with the past several Mondays, I'm posting another installment of Remembering Ireland. This time, I'm showcasing Bunratty Castle Folk Park and the Medieval Feaste. Let's get started!

After spending the morning in Limerick going to the Hunt Museum, St. Mary's Cathedral, and then getting lunch at the Locke Bar, we took a cab to Grange Henge (which will have it's own post next week). After spending a bit of time there, we then took a cab to Bunratty Castle Folk Park.

Bunratty Castle Folk Park is comprised of Bunratty Castle and it's village, all contained within stone walls, in the village of Bunratty. The original site is estimated in the 900s, while the first castle was erected around 1251. The current Bunratty Castle was built by the MacNamara family around 1425. I was told that back in the day, villages would grow up around castles, whose nobility/royalty would then protect the inhabitants behind it's walled-in borders.

Today, it's been reconstructed, but you get a taste of what life would have been like back in the day. There are traditional Irish homes, fancy homes, an entire downtown, animals, ponds, fields, a church, and, of course, the big castle. 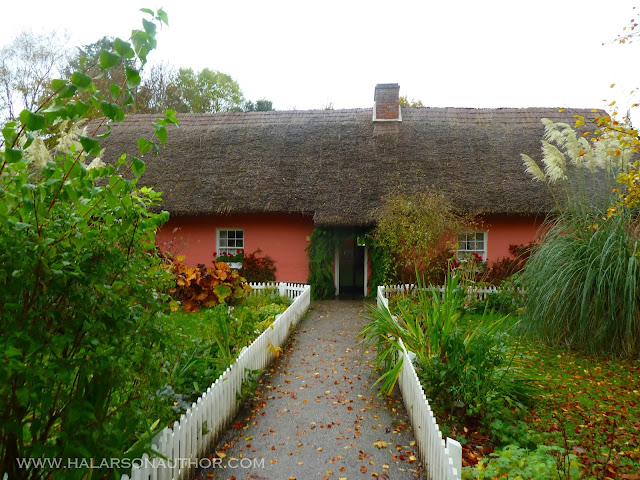 One of the old Irish homes that sits on the property. 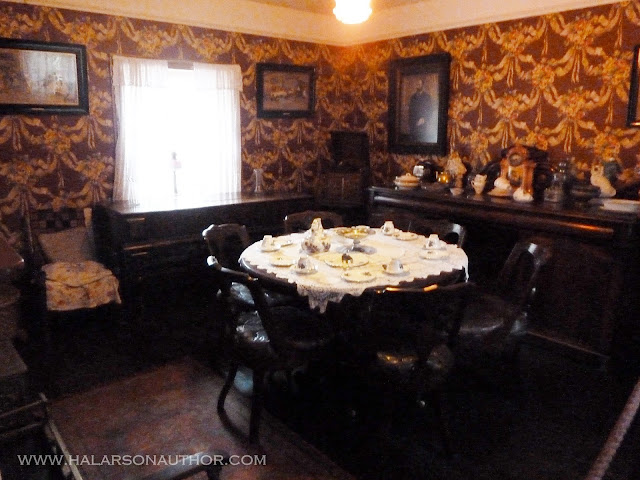 A look inside the home. 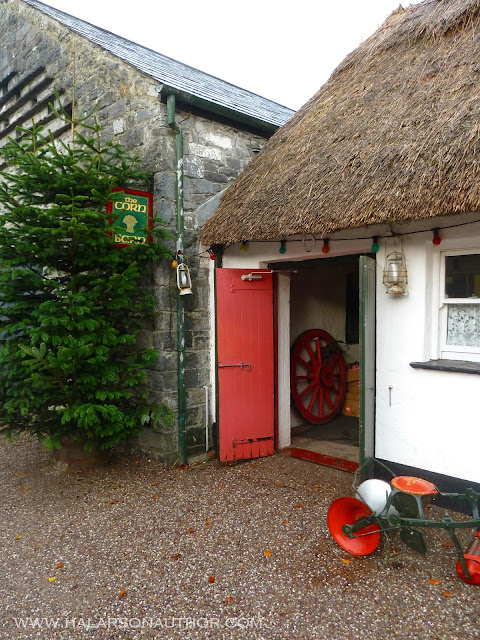 A view into the doorway of the Tea Room. 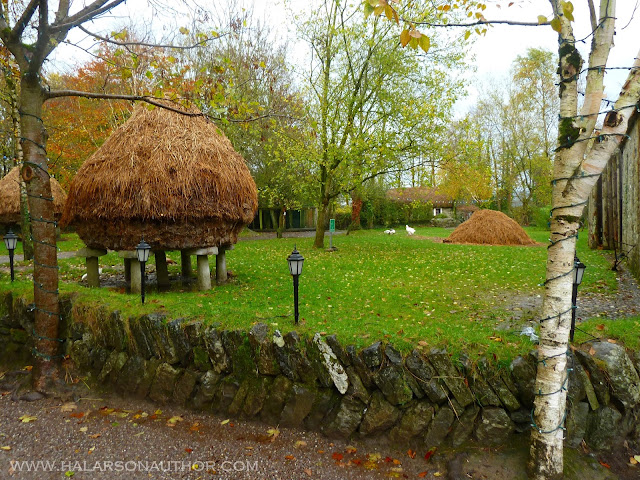 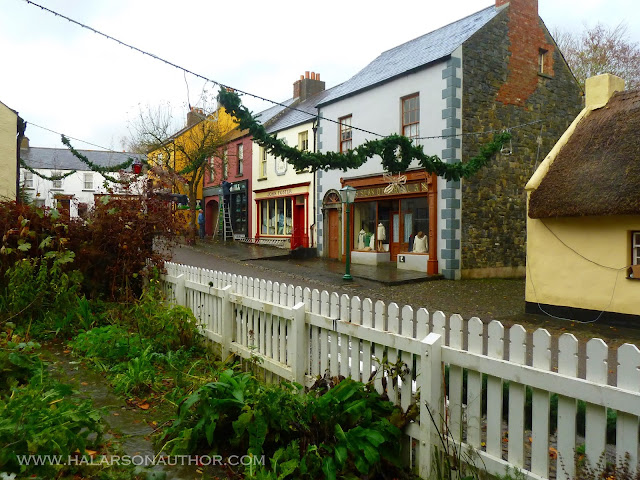 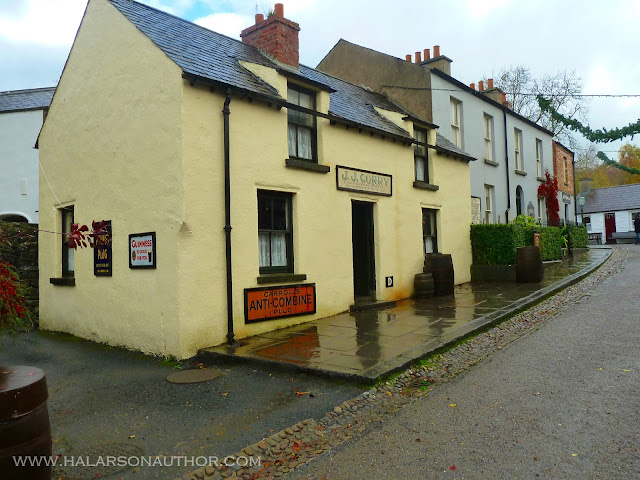 Along the other side of downtown. As a side note, all the little shops are still in use, but they are for artisans and craftsmen to sell their wares. I got some ceramic earrings, wine stopper, and choker from the potter. 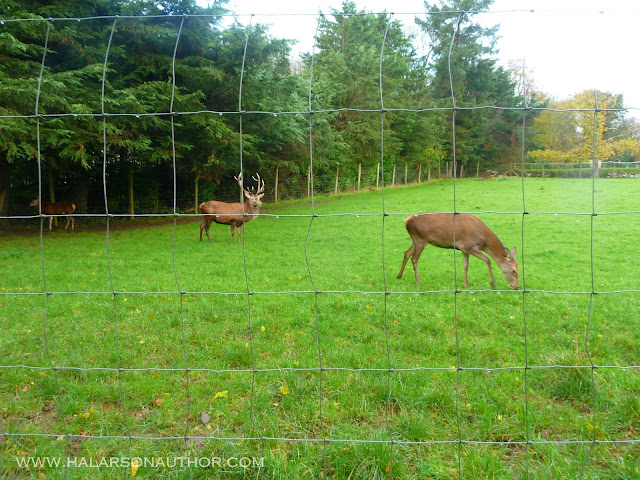 Some of the animals that live at the folk park, these are deer. 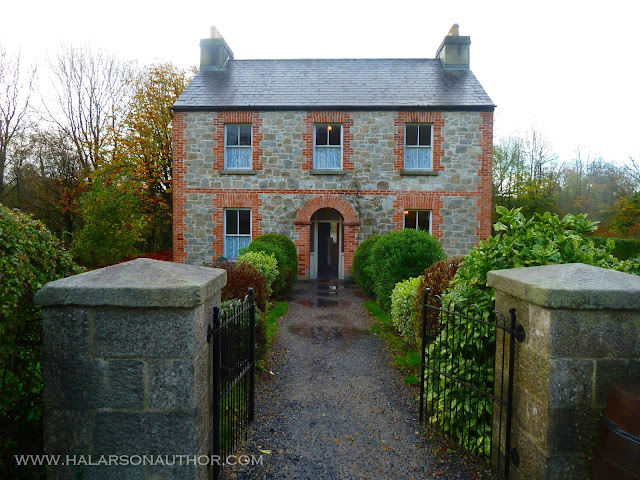 One of the fancier homes of the park. 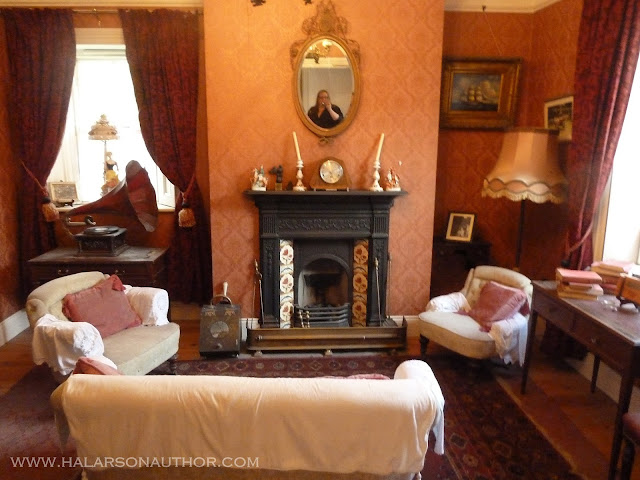 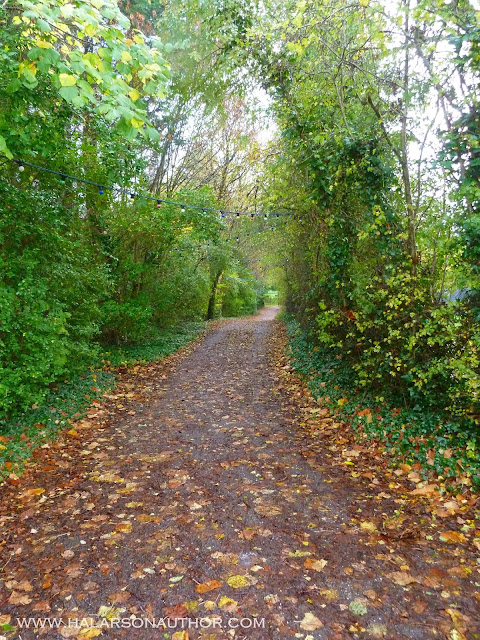 One of the many idyllic walkways of the park. 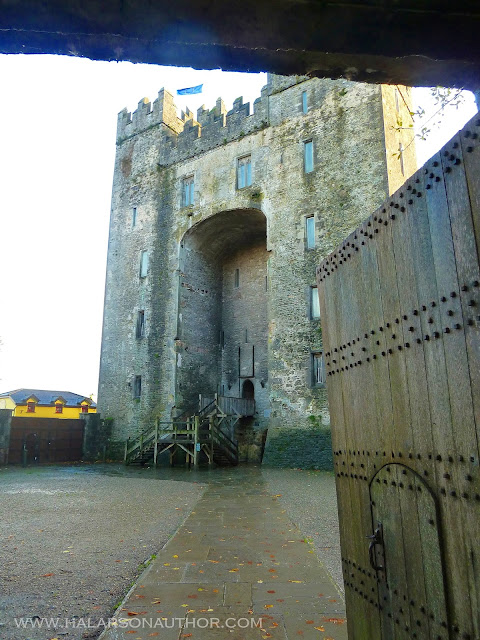 A view as you enter the castle grounds from the doorway. You can spend a day visiting the park and looking into the castle, but after around 4 p.m. they close the castle to park visitors to get ready for the Medieval Feast. The Feast is an authentic dining experience complete with period tradition, food, dinnerware, and entertainment. 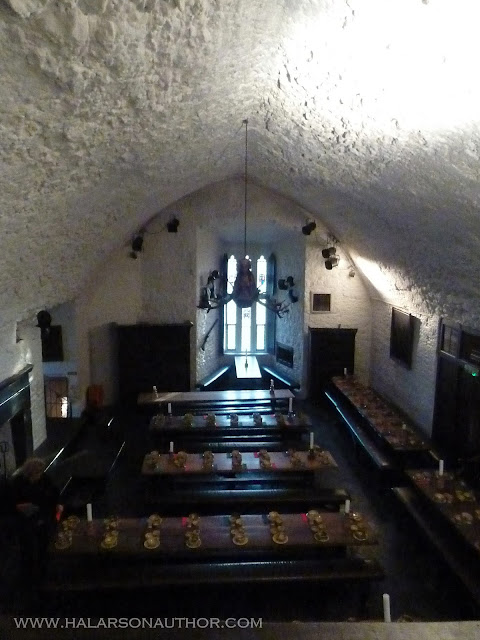 A view down into the dining hall of the castle. I had purchased the Medieval Feast tickets before we even left the states. You all know how much I love medieval stuff, so I wasn't going to miss this event! We spent our time waiting for the feast by visiting the rest of the Folk Park, which was lots of fun. 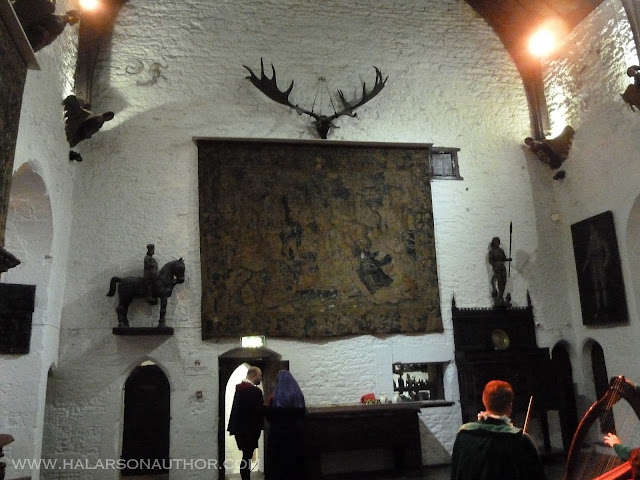 We were all led to the top floor of the castle when we arrived for the Feast. This is the reception hall which was adorned in the Medieval style. We were serenaded by harp & violin while drinking meade and eating salted pieces of bread, a traditional hors devours back in the day. 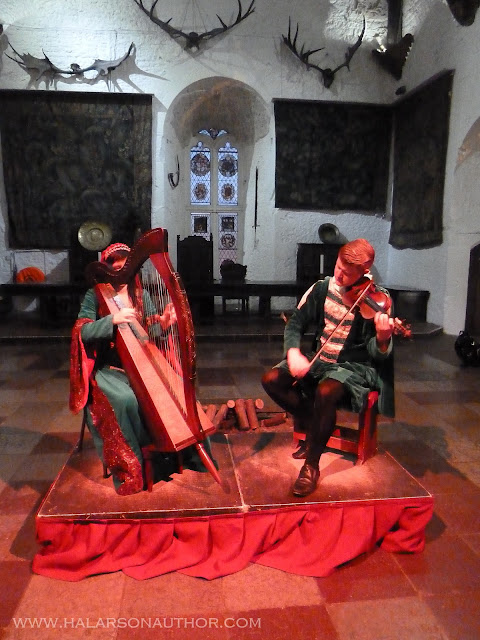 A better view of our pre-dinner entertainment. 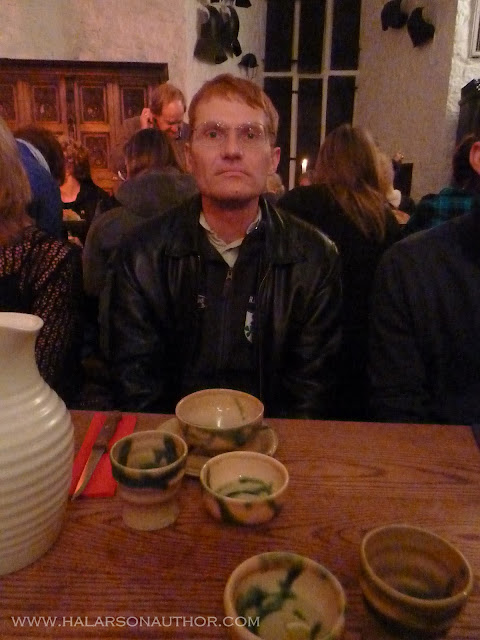 My best friend Keith at the banquet table. After reception, we were led down to the dining hall where they sat all guests across from one another to allow you to see each other better, and to get to know the people beside you. 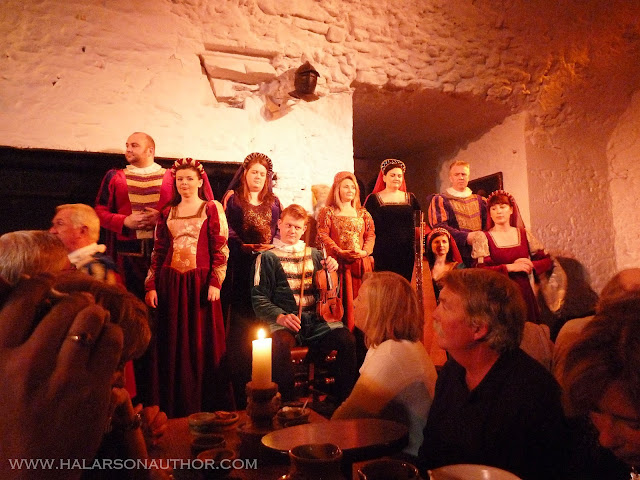 Throughout the four-course meal, we were serenaded by different entertainers who sang, cracked jokes, and played instruments. The feast always crowns a lord and lady of the Castle for the evening, and this night they chose a couple celebrating their 50th wedding anniversary from the U.S.

One of the highlights of the evening was when they grabbed a random American from the audience, and claimed he was a 'thief'. He was told to sing as his punishment, and so he started singing "Take Me out to the Ballgame" at which time everyone joined in. It was a fantastic time and I hope you can experience something like it one day. 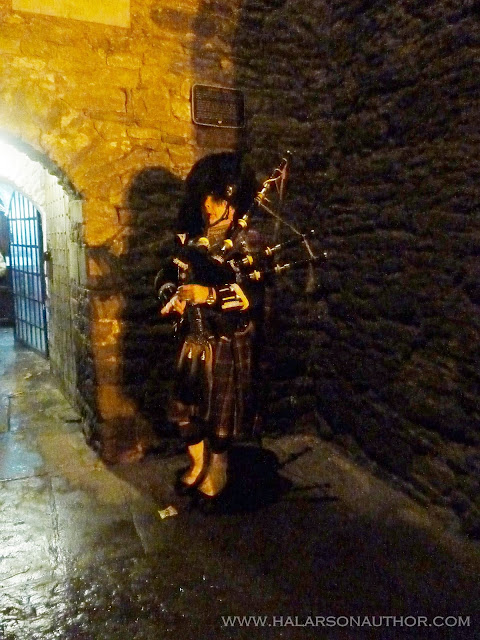 As we left the Feast, we were treated to bagpipes. I love bagpipes! 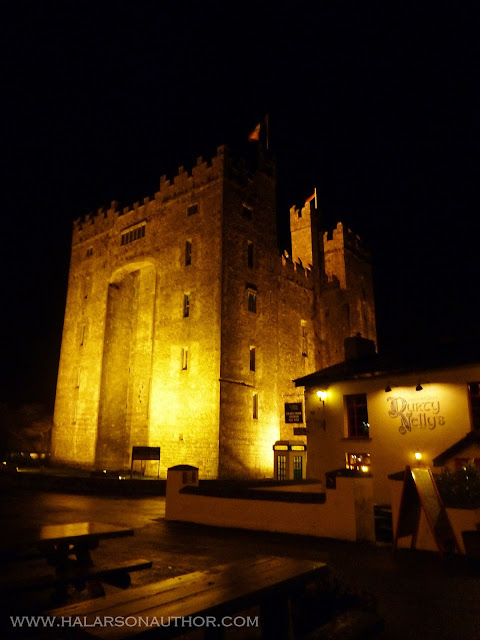 A view of Bunratty Castle from outside the walls. You can see the phone box and Durty Nelly's pub. We stopped in there for a drink afterwards.

Bunratty Castle Folk Park is run by the Shannon Heritage Foundation, the same Foundation that runs the other castles we saw in Ireland (this was the last one we actually went into). For more information and to reserve tickets, visit the Bunratty website.