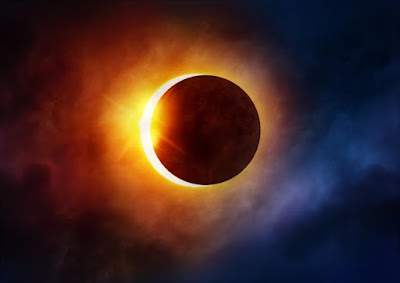 We know that I'm a bit of an astronomy buff, and have been since my Dad instilled a love for the stars in me at a young age. I make posts here and there about sky events that are coming up in the hopes that you, too, can see what all the fuss is about.

More often than not, sky events can be less-than-exciting. Trust me, I know. You'll be expecting something that will blow you away with it's wow factor, but it ends up being something, if you can even see it, that doesn't appear to be much. However, for all the unexciting sky events, there are always a few of those awesome ones that we can look forward to throughout the year. Eclipses are one such event, and can either be Lunar or Solar.

A Lunar Eclipse (LE) occurs when the Moon passes through the Earth's shadow. A Solar Eclipse (SE), on the other hand, occurs when the Moon passes in front of the Sun, blocking it from our view and casting darkness over all of the area it surveys. While LEs happen a couple of times a year, a SE only happens around once every 18 months. Additionally, an SE will be visible in different parts of the world when they are visible, so there's less of an opportunity to view them.

This year, however, America will be fortunate enough to see a total SE on August 21, 2017 in a 70 mile wide swath that stretches from Oregon to South Carolina. In order to view it, it is recommended that one takes proper precautions, because staring at the Sun, even during an SE is harmful for your eyes. The Space website has great information about the SE coming up this year, and how to view it. Read the article on the Space website.

Make sure, if you're close enough to the path, that you don't miss this event. A SE is a one-of-a-kind experience that one doesn't get to see very often. And unlike the aforementioned less-than-exciting sky event, this one is definitely exciting!

Check out these sky events for June/July:

1. June 3: Venus will be nice and bright in the eastern skies before sunrise.

3. June 15: Saturn will be most visible and brightest all through the night, making photography of the planet and it's moons possible.

4. June 24 & July 23: New Moon. This means the moon will be on the same side as the Sun, making it non-visible in our hemisphere. Because of this, you can take advantage of it to view other celestial objects that are typically not able to be seen due to the brightness of the moon.

5. July 29-30: Delta Aquarids Meteor Shower. This meteor show will be best seen after midnight in a dark location and can display up to 20 meteors per hour at it's peak.

6. July 30: Mercury will be most visible today, low in the Western sky just after sunset.

For information on my other books, link up to my Pronoun Author Page.