The Short: Review of Fisthammer's Devour All You See

Hello there! Thanks for stopping by. Today, I'm going to introduce another new segment. It's called "The Short" and will consist of short, but sweet, reviews of music. I'll review mainly albums, but don't be surprised if a video or concert gets thrown in here once in awhile.

A bit of a backstory: I'm a metalhead. I love different genres and styles of music, like Classical, Blues, Renaissance Folk, Rock 'n Roll, Punk, and even some 60's Pop, but my one true love has always been Metal. A schoolmate lent me a copy of Judas Priest's Screaming for Vengeance, and Iron Maiden's Powerslave back in 9th Grade, and, as the saying goes, I never looked back. It shouldn't be much of a surprise, as a writer & fan of horror, that I'm a metalhead.

I mentioned recently that I had gotten into the whole bandcamp thing. It's there that new life has been breathed into my love of the metal genre. There's so much great music out there to find and explore, that it's been a real breath of fresh air. 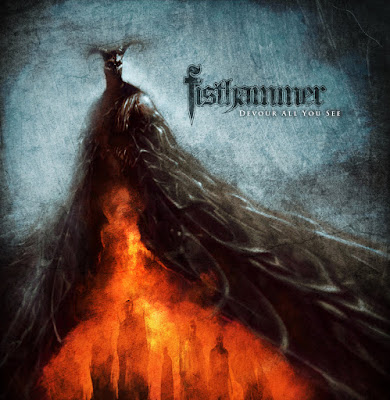 Fisthammer -- now defunct, R.I.P -- was a band from Philiadelphia, PA, USA. 2012's Devour All You See was their debut album (they put out one more in 2014 before splitting up). Mainly a Death Metal band, they did incorporate some technical and melodic aspects to their album. I say this because while it's an obviously death metal album, the complexity of the song structures and riffs weaves effortlessly between the technical and melodic side of the genre.

Indeed, the opening riff begins like a standard death metal song that immediately shifts into the technical/melodic structure that I mentioned. This continues song after song until it becomes clear that this is their hallmark. They consistently, song after song, deliver a hard-driving, fast-paced, skillful treat for the ears. Unrelenting, it takes you effortlessly through the entire album.

I highly recommend this album, which can be purchased for $6.66 (or more if you'd like) on bandcamp. Find it here: Fisthammer's DAYS.