Hey everyone! Sorry I was absent the last few days. I had a typical Monday (coming right up!) which ended with me not feeling very well. Yesterday, the sickness (stomach flu more than likely) reared it's ugly head and all I did was sleep and moan a lot. I'm still feeling a bit icky today, but I've taken some meds and am getting back into the swing of things.

The last three Mondays (my day off during the week) have been absolutely perfect. The weather has been just right, allowing me to get things done and indulge in my favorite activity: being outside, particularly as it pertains to hiking. This week I went to Hitchcock Nature Center. A quick drive over the river into Iowa, this park used to be a YMCA camp at one point before being privately purchased by a man who wanted to turn it into a huge garbage dump. Some citizens challenged him in court, and eventually, wrested control of this beautiful area from him and turned it into a county park that is pure heaven to enjoy. It's one of my favorite places to be next to Neale Woods (see Monday Edition #1).

A view from the topmost part of the park at the Lodge. From here you can survey the beautiful land rolling up and down the Loess Hills. The Loess (pronounced Luss) Hills are so-named for the soil they are comprised of, and only a few places in the world have this soil. Nestled among the flatness of the Midwest landscape, these Hills provide a mountainesque experience for those of us who live here. 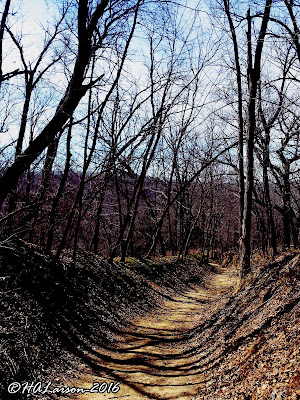 A view from the beginning of the trail called "The Chute". It's hard if you're going up, but not so much going down. Don't be fooled though, sometimes going down can be almost as treacherous as going up. 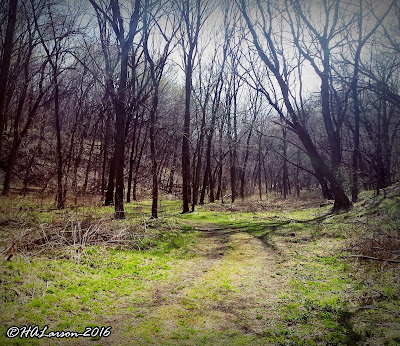 "Hidden Valley" trail is so named as it's hidden from sight on top of all the hills that surround it as it's nestled amongst a canopy of trees. The trees are just starting to bud, and, as you can see, the grass is returning to green. 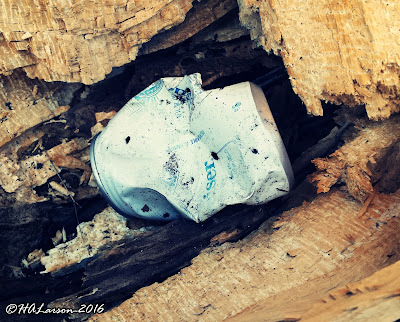 Many logs were carefully piled up in stacks along the trails here and there. Old, dead trees are cut down and chopped into firewood which are then sold to those who camp out here at the park for use in their bonfires. Primitive sites are only $10/night. 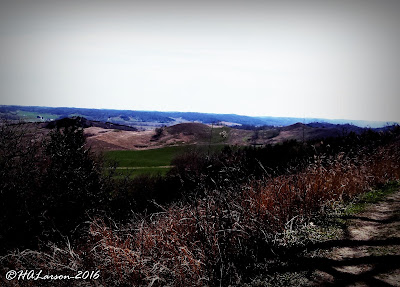 This view is looking the opposite direction from the lodge, directly into the Loess Hills, part of which I was standing on, and part of which you can see off in the distance. It's a beautiful touch of majestic for us flat-land dwellers. I take a picture from this exactly spot every season. If you look through my posts...you might find them all! 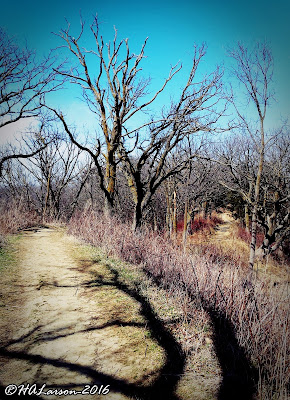 The duality of the trail made possible through a hidden fork in the trail. Even the stark, bare trees look content and peaceful here. Is it any wonder I adore being outside?

I hope your day is bright and lovely.