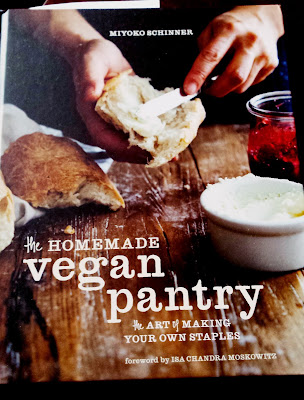 Most of us vegans have heard the name Miyoko Schinner. For those of you who aren't vegan, or who haven't heard of Miyoko, read on. Miyoko is one of the chefs on Vegan Mashup, which can be seen on PBS. I've only gotten a chance to watch the show a few times, but it's a great resource for us vegans. Anyway, with my Amazon gift card money from the holidays, one of my purchases was Miyoko's cookbook "The Homemade Vegan Pantry." Next to Isa's 10-year anniversary edition of "Vegan with a Vengeance" it's my favorite vegan cookbook. Inside are tons of recipes for vegan butter, flavored mayos, cheeses, milks, and how to make seitan (including nuggets and unchicken), just to name a few. 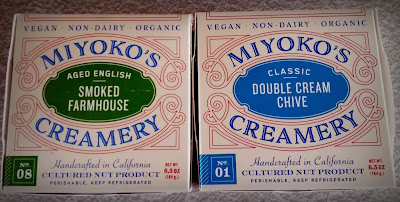 Miyoko is also the creator and genius behind a cashew-based, artisan cheese company called Miyoko's Creamery. The Classic Double Cream Chive and the Aged English Smoked Farmhouse are my absolute favorites! Finally, we vegans have a snacking cheese! One that can be eaten with crackers and a bunch of other fun stuff. My omni husband couldn't tell they were vegan at all, and neither could I! 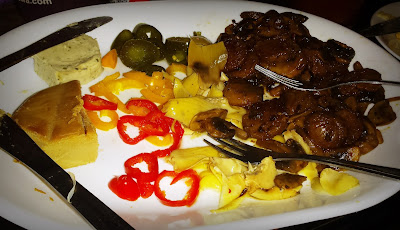 This is what I did last night. Both cheeses are on the left, and I added sweet Italian peppers, jalapeno peppers, grilled artichokes, and a pile of Tofurky Italian sausages sauteed with mushrooms. I used all this to top crackers, and everyone loved it!

I highly recommend Miyoko's cookbooks and cheeses! You'll love them, even if you aren't vegan. ;)