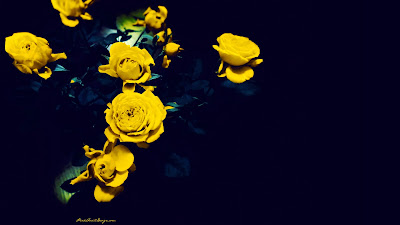 One block over from my house is a street that I drive on daily. Nearly every day for the last five years, I have driven by a little yellow duplex located on that street. While I've never met the occupants there personally, I've driven by there so many times that I feel like I kind of "know" them.

The right side of the duplex has had a menagerie of young girls that have moved in and out of the duplex over the years, but the left side has always been occupied by an elderly woman. If I had to guess her age, I'd guess her to be about 75. I would even venture to say that she was a young 75. Her hair was always cut in a cute short style and died a nice bright red color. She loved sitting outside in the sun on hot summer days. She'd drag her patio table and chairs out into her driveway (no umbrella) where she would read for hours while soaking up the rays.

Last week, I saw many trash cans filled with junk sitting outside by her curb and my mind took mental note. I've never seen her have more than one trash can and one recycle bin sitting outside during trash day so I began to wonder if she had passed away.

A few days later when I drove by I noticed a lady carrying boxes out to a U-Haul van parked in the driveway. Then, today when I drove by, I looked over to see a few more trashcans that had already been emptied earlier in the day. The pretty lace curtains that used to hang in her big living room window were gone, replaced by a vision of emptiness. I could see through into the darkened apartment where nary a thing remains.

I have to admit, I got a bit choked up. Maybe it's just the hormones of a woman inching ever closer to menopause (that's a different story), or maybe I'm just a softie, but I really felt a pang of sadness at the passing of a woman that I really didn't know.

What was she like? Was she ever married, or was she an old maid? Did she have any children? I'll probably never know for sure, but I'd like to imagine that she lived an exciting life in her youth, one filled with adventure and romance. That she loved fast and hard, that she had one child who doted on her, and that she enjoyed the lazier pace of her twilight years immersing herself in tales of enchantment as she basked in the warm glow of the Sun's rays.