One of the things on my bucket list (yes, I do have an actual bucket list) is ghost hunting. I've been fascinated with ghosts since I was a kid, which should come as no surprise considering that I write books about ghosts. I've watched many ghost hunting shows, but I never really liked any of them except Ghost Hunters on the Travel Channel. While I don't want to make a life out of it by any means--with the exception of writing about it--I think it sounds like a lot of fun. I mean, c'mon. You go to creepy places at night when it's dark, making it more creepy. I like creepy. Creepy and I are friends.

I ordered a simple ghost hunting equipment kit that has your basic equipment and comes in a handy, lockable, carrying case. I got mine on amazon here if you're interested. I bought mine for just under $100, which was a great deal and came with a motion sensor, a Gauss meter, an infrared thermometer, three LED finger lights, a digital EVP recorder, a geo-phone, and a book about the science behind ghost hunting. Like I said, it was a bargain!

My son is my ghost hunting companion and we're getting some practice in by going to local areas. In April we are going with friends to get locked down overnight in a reputedly quite haunted old asylum in Northeastern Iowa, so we're trying to get familiar with what we're doing before we go for the big one. Our first night we tried to go to Ball Cemetery in Springfield, NE, a site well-known to local and national ghost hunting groups. We should have checked first because it's a no-trespassing kind of place at night and there was a clear warning to stay off the property. A quick search of the internet assured us that any trespassing would be met with the owners chasing us off with guns. We left feeling dejected, but did a search for cemeteries in our area. I mean, if you're going to ghost hunt, a cemetery is the place right?

We ended up at a cemetery in Papillion, NE, that was small and fairly newish, but there was a lot of noise pollution. I thought I might have gotten a few EVP phenomena but with the background noise, it was hard to be sure. We also got a few good Gauss readings.

This last weekend we tried again. First we tried Prospect Hill, another well-known haunted cemetery, but if you know anything about Omaha you know that it's not in the safest of areas. We drove through the cemetery and we didn't see any of the riff-raff that also reportedly haunt the place but thought we'd be safer elsewhere. In hindsight, we should have just stayed there because our second choice, while another infamous haunted spot, was scattered with cars at night doing who-knows-what. Hummel Park has a good reputation for ghosts but another bad reputation for people hanging out at night up to no-good. We had reservations about it with just two of us and after we saw a couple of cops drive through we decided to try elsewhere.

We ended up out in West Omaha at Pleasant Hill Cemetery. It had a lot less noise pollution than the Papillion cemetery so we got to work. 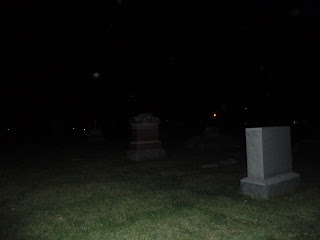 We also brought our camera so we could get some visual evidence. I forgot about it having a video camera on it, lol, so I will remember that for next time. See, practice is good. I would like to get a good camcorder down the road...sometime before our lock down. 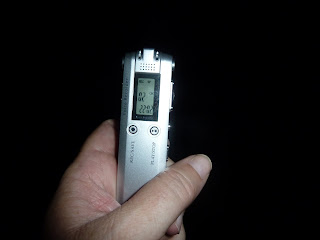 A shot of the EVP recorder. You can see that it's our second recording, the first was the first cemetery we went to the weekend before. Makes sense. 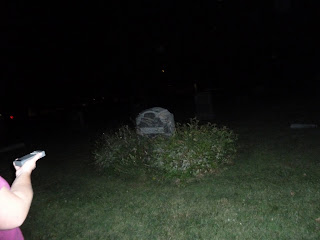 Here is a shot of me holding the Gauss meter. We got a good reading here and spent a few minutes prompting any spirits to talk into the EVP recorder. 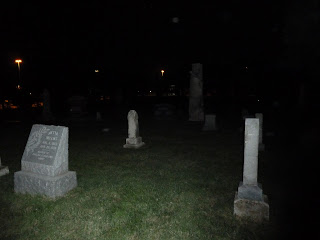 A good shot of the cemetery. The orbs were just dust spots, that much we knew. ;) 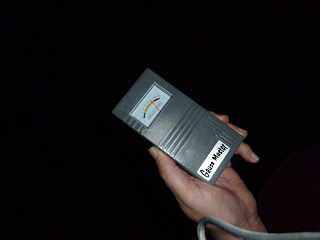 This photo shows the best evidence we got that night. I was using the Gauss meter on the more sensitive setting and received a 6 milligauss reading, which was very high. We hadn't gotten one that high yet, so we were pretty excited. The phenomenon continued for a few minutes and then disappeared. I've made a precursory listen to the EVP but have to listen again more closely to see if we got anything.

So, there you have it. Our ghost hunting adventure, while not yielding much was a lot of fun. It was an interesting, fun, and different way to spend some quality time with my oldest child too!
Labels: Ghosts & the Paranormal Photography