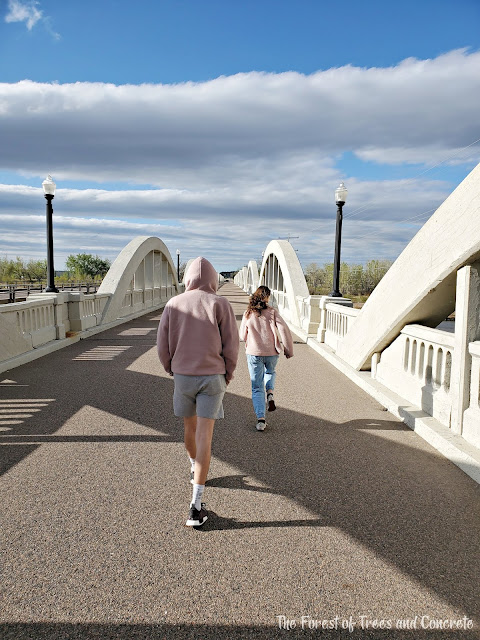 This is my last post about the trip I took the kids on for Mother's Day this year. I love sharing posts about the adventures I take, as it's a nice way to remember the fun things I did. Anyway, carry on.

After we left the Pawnee Buttes of the Pawnee Grasslands, we headed to our motel for the night where we got settled and changed into casual clothes. Still practicing social distancing, we drove for a way to check out the Rainbow Arch Bridge in Fort Morgan. It was quite the marvel when it was built in the 1920s, and it has been restored to its former glory. While it's no longer a bridge for car traffic, it's the perfect bridge for taking a stroll across and admiring its fine architecture.


It didn't take long to walk across it, so we didn't spend a lot of time here, but it was a neat thing to check out. There is a park adjacent to the parking lot that was cool - it had a large pond with geese even! If you want to learn more about this piece of history, check out this online brochure.

The next day we made the drive into Kansas to check out Mount Sunflower after which we started the long drive back home. I decided to avoid going east to Kansas City and then up north to Omaha, so we headed north to get back into Nebraska. The plan was to meet back up with I-80 and make the straight shot home. Along the way, we took a lot of pristine and quiet county roads that were in much better shape than I anticipated. The neatest thing about them was the interesting wayside stops that are a throwback to a time when traveling these roads was the norm, and not the exception.

When we happened upon Massacre Canyon, near Trenton, NE, I knew we had to stop. It does have a small visitor's center and a shelter with a picnic table, so if you're ever in the area, make a stop. The VC was closed due to Covid-19 when we were there, so that's something you'd want to find out before making the trip. It apparently has a stegomastodon display showing the specimen that was unearthed a mile away. I sure would have loved to have seen that! 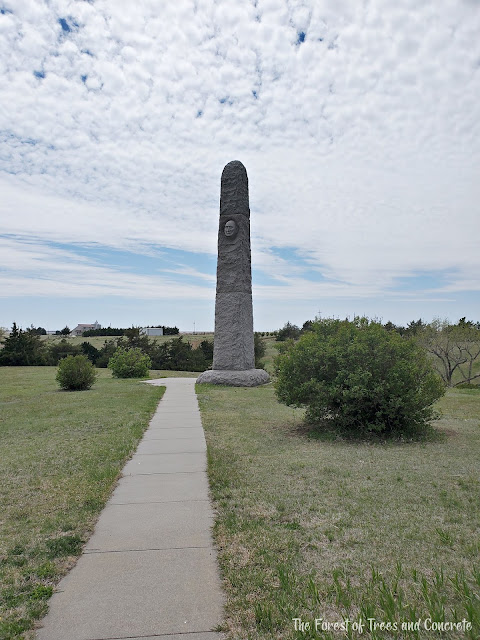 On August 5, 1873, a Sioux war party ambushed the Pawnee during their annual buffalo hunt and killed 150 men, women, and children. This story is made even sadder when you read the back story.

The Sun, which had been shining up until our stop, was overcast by the clouds and lent to the serene site. While the marker has been moved about a mile from the original battle site, there's still a large area of plains here to imagine what it would've looked like back then. 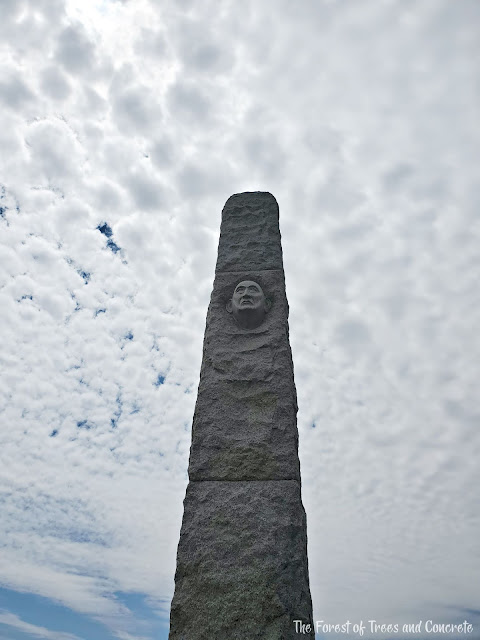 The other side of the monument shows a chief on its face. I'm not sure if these faces represent actual people or just the tribes involved in the battle in general. If you know more detailed info about the obelisk, I'd love to hear about it. 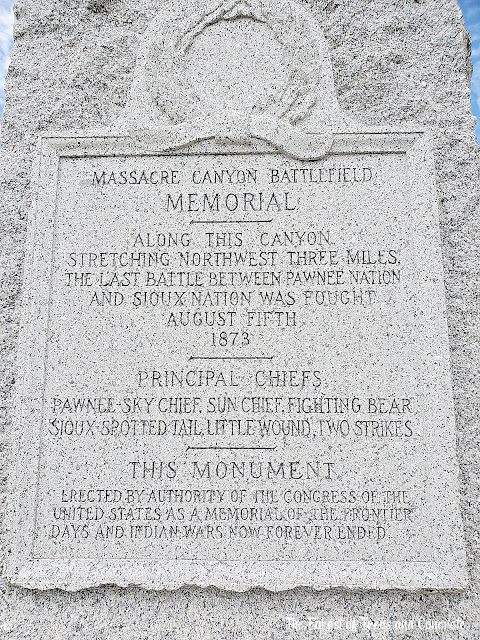 This informational bit is part of the monument itself but doesn't give as much information as the landmark sign at the entrance. We paid our respects and left, making our way home.

What a great trip this was. Not only was it fun, but it was a much-needed respite from the two months of quarantine we had practiced at home. It reset our minds and bodies, and we arrived back home exhausted, yet renewed. It's amazing how much adding some adventure to our lives, whether it's on a small or large scale, can have an impact.

Our trip together was calm and peaceful as well, making it all the more fantastic. What I took away from this trip that I didn't expect was a new-found love for the plains. While I've never spent any real time in them, their legend has always preceded them as a spot in the country to just hurry up and get through. This trip afforded me the hours and miles in which to truly see the plains for the first time. They're not boring and ugly, as many people automatically assume, but rather a majestic look into the expanse of the openness that defines them. I've always viewed the places that move up towards the sky as the majestic areas, but there's nothing more majestic than seeing the earth and the sky meet each other all around you. I think that one day I shall backpack across them - and I wouldn't be the first - but until then, I'll look back on this trip with a special fondness I won't soon forget.

"Anyone can love a mountain, but it takes soul to love a prairie." - unknown