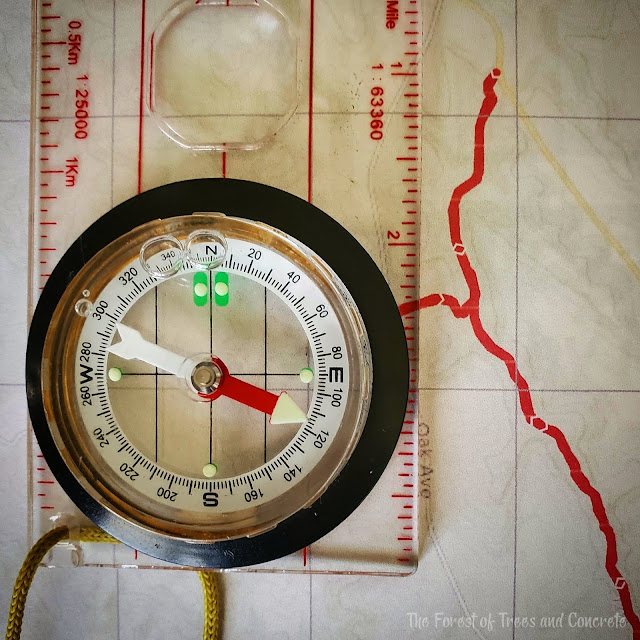 A while back, my daughter, Eva, and I were out exploring a new place. We're always on the lookout for new places to hike, and this one looked promising. While not a large place, comparatively speaking, it is heavily forested, and there are so many offshoot trails that lead off the main one, that it makes for fun exploring. The only problem is that after hiking around for a while, we found ourselves a bit disoriented and lost. And, since we had never been there before - nor were we armed with any kind of map - we weren't sure how large the place was (at the time) nor exactly how to get back to the trailhead.

Not one to fear, however, and because we both carry a simple compass/whistle combo in our backpacks, I loaded up Google maps on my phone, armed myself with my simple compass, and navigated us back to the car. That in itself turned out to be really fun, and somewhere on the hike back to the car, I thought about orienteering.

Orienteering is a sport that's easy to look up, but in its most basic sense, orienteering is the skill of using a compass and a map to find your way in an unfamiliar place. This skill is a valuable skill and I decided that it's one I wanted to learn. My first task, then, was to get a better compass. Fortunately, someone I know had the compass shown in my photo above. They weren't using it and when I mentioned wanting to learn orienteering, they gave it to me. While it's not quite the compass I ultimately want, it's more than sufficient as a starter one.

I then downloaded a map of my location, printed it off, and set about using it and the compass to learn how to orienteer. I got some help in the way of an REI YouTube video, which helped immensely. Then, Eva and I went back to the new spot and orienteered our way through the entire place. I am now completely hooked on this activity!

Since then, I've purchased a better compass and signed up for a course that teaches basic map & compass skills. I'm pretty excited about this and you can bet I'll be doing this a lot in the future!