Recently, I spent a long weekend in Portland, Oregon. This isn't the first time I've gone as I spent a long weekend there last October as well. I went to visit one of my best friends, Lisa, who had moved out there a few years prior. We both enjoyed the visit so much that we decided to make it a yearly thing.

This time I made it to Multnomah Falls, a place I had wanted to go to last year but missed the bus that goes out that way. I won't go into detail about my time there as I have a separate post about the Falls that I'll be posting this week. Needless to say, it surpassed my expectations and I had a good time.

This year, I had clung onto the fateful idea that I'd be able to climb Mt Hood. Since I joined the Highpointers Club this summer, climbing the high point in each state has now become something of a priority. Mt Hood is mainly a snow and ice-covered summit so there's only a limited amount of time during the year where hiking up to the top - as opposed to technical climbing with equipment - is possible. I'm not a technical climber, or a climber at all really. Hiking, yes, climbing, no. I'm a hiker, not a climber. Anyway, there was no way I was going to be able to hike up in late October so I had to shelve that idea. I would like to go in the summer one day and reach the summit, but it's going to have to wait a few years. 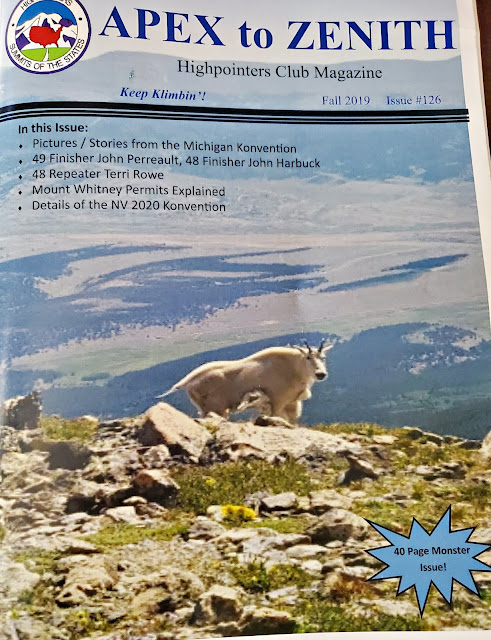 Speaking of the Highpointers Club, I received my first quarterly club magazine. Called Apex to Zenith, fittingly, it has interesting stories, photos, and a list of new members - myself and the kids were included. Right now, my plans involve hiking two high points next year, but, until then, I'm doing Nebraska County high points. I'm keeping track of all of them as well.

One thing I realized during my trip to Portland was how badly I had neglected my travel diary. I had completely forgotten about it and had missed a good five entries. Ugh So disappointing but I made a short note of the ones I missed and am working on the South Dakota entries from this summer while it's still somewhat fresh in my mind.

I hope you have a great finish to your weekend. I had a relaxing day yesterday, so today it's time to get busy. Until next week, H.A.