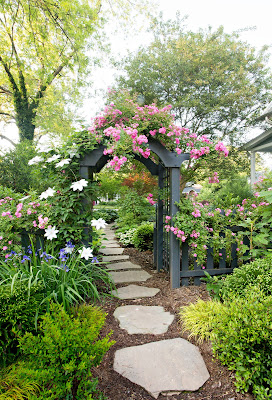 Highways 75 and 77 run part of their length through Omaha and Sioux City. Collectively, in that area, they are known as the Lewis and Clark Scenic Byway. Now, if there's anything you know about me from reading this blog over the years, it's that I love scenic byways. Off the beaten path, scenic, relatively quiet, and home to many unique places of business, points of interest, and nature stops, you just can't beat a day trip on one of them. So, when I saw that the L&CSB had the Garden Path Tour 2019 held on two separate Saturdays, I thought that sounded like a great idea. The Sioux City Journal touted it thusly: "Adventure is waiting when you tour gardens, flower shops, farmers markets, greenhouses and more on Nebraska's Lewis & Clark Scenic Byway. The byway follows Highway 75 from Sioux City to Omaha for a self-guided auto tour. August 31 and September 7."

I got ahold of my bestie, Libby, and we decided to go together with her three-year-old and my thirteen-year-old. We both packed a nice array of picnic goodies and set off to explore the places on the list that we chose.

Our first stop was between Omaha and Fort Calhoun at the Super Bee Orchard. We grabbed a map/brochure (we knew they were available at each participating location) and perused their homemade jams, jellies, crafts, and, of course, fruit.

We then stopped in Fort Calhoun to check out the Washington County Museum. Typically, it costs money to go but every participating point of interest was free for the Garden Path Tour. 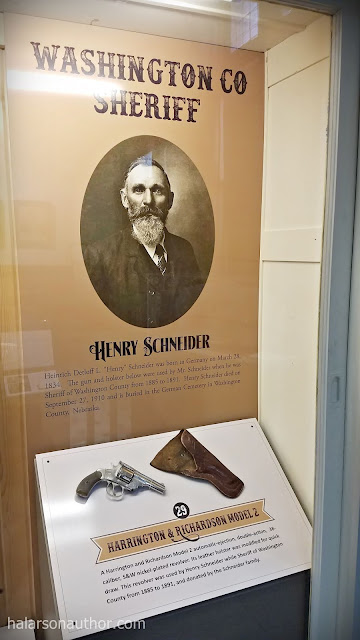 I was actually quite impressed with the museum. I've been to tiny-town museums before and, usually, there's not much going on, but this one had several rooms of quality museum displays. Here we see one about Henry Schneider, and it shows the actual gun and holster he used during his years as Washington County Sheriff. 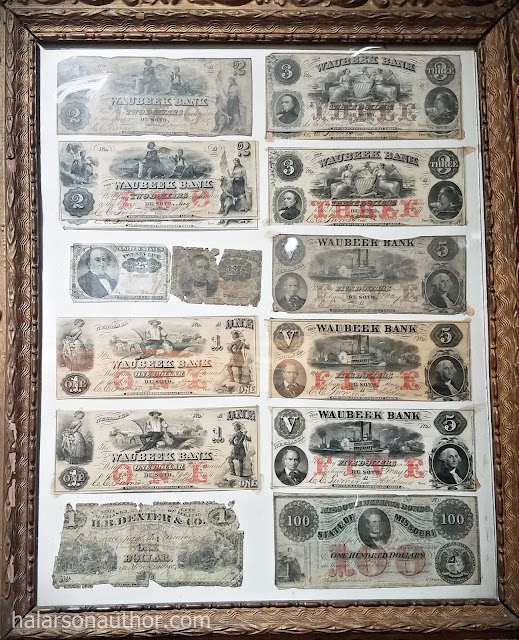 Money issued by Waubeek Bank, a territorial bank back in frontier times. 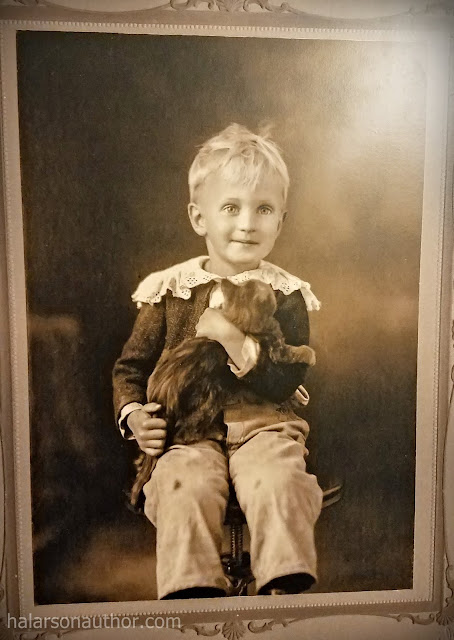 There were a series of old photos of children that I really loved. This one, in particular, is just too cute with the little boy and his kitten. 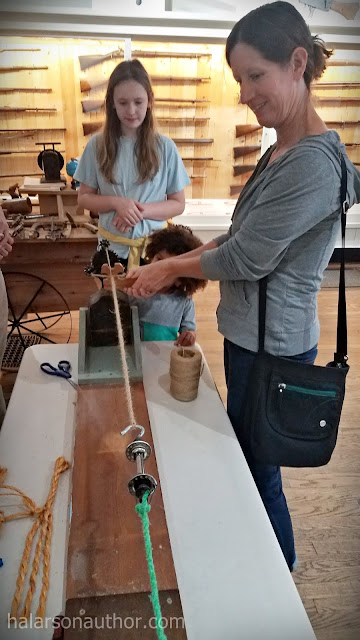 The museum even had an interactive display where you used an old rope-making machine. The kids both took a turn, with help from the moms as it takes two people, making rope. Little man wanted to keep making rope, and, hey, who can blame him? It was fun. 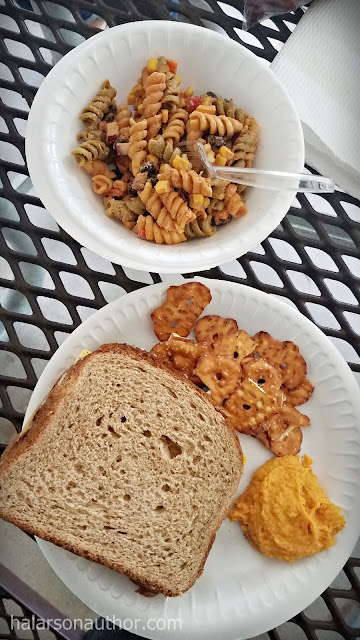 After our museum stop, we were ready for lunch so we stopped at the public park in Blair, NE, to have our picnic lunch. I made a chipotle southwestern pasta salad, plant-based cold cut sandwich, and pretzel chips with my homemade carrot hummus. Man, that hummus was killer. 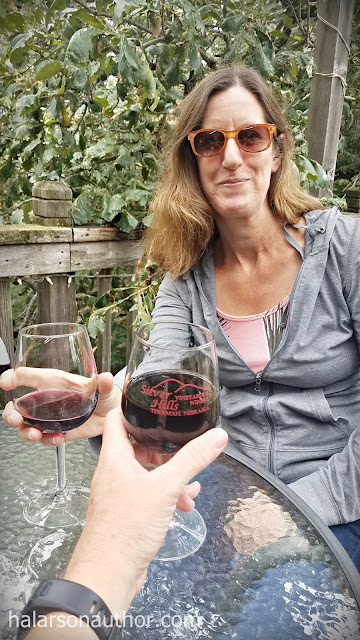 After lunch, we decided we needed some wine, so we drove through Tekamah, NE, and into the country to go to Silver Hills Winery - one of two wineries on the tour. I've actually been to this winery before and it's a beautiful place to sit and have wine on a nice day. They have a large garden and patio, so the kids ran through the gardens and then did art at an adjoining table while Libby and I enjoyed some adult libations. 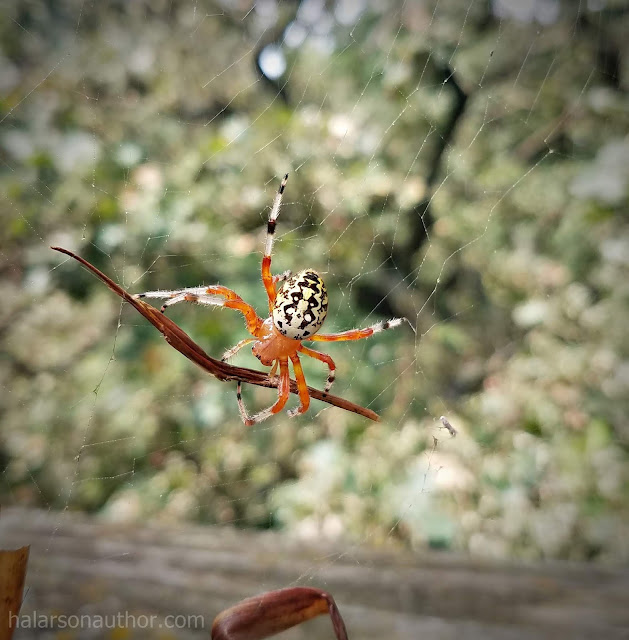 This guy was weaving a web next to our table, and he was interesting, so I snapped a picture of him.

I grabbed a bottle of port on our way out as I love port and it's not easy to find. Libby grabbed a few bottles of wine as well, and then off we went to our next stop. 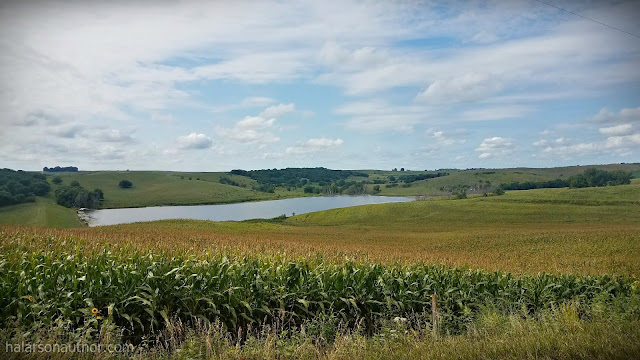 I had Libby stop here so I could get out and snap a picture. The rolling hills and farmland of Nebraska can make for some picturesque moments, that's for sure.

Out next stop was at the John G. Neihardt State Historical Site in Bancroft, NE. John G. Neihardt is the Poet Laureate in Perpetuity in the State of Nebraska - the only one in the state's history. 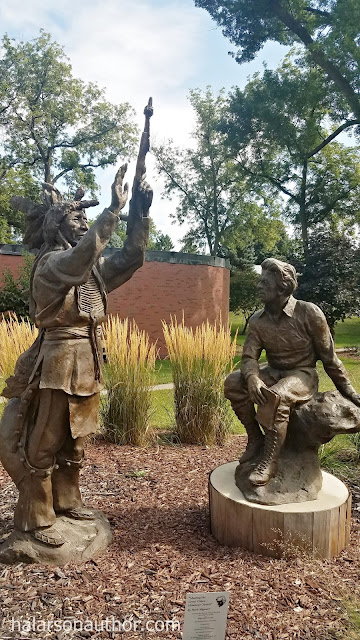 The site has a visitor center/museum that is small, but quite interesting. Outside, you are welcomed by a statue representing one of Neihardt's most famous works, "Black Elk Speaks." The statue, then, is of Black Elk and John G. Neihardt. 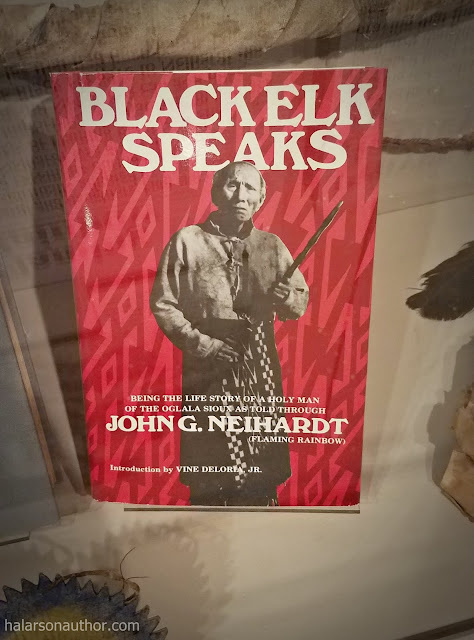 A copy of the book is on display. 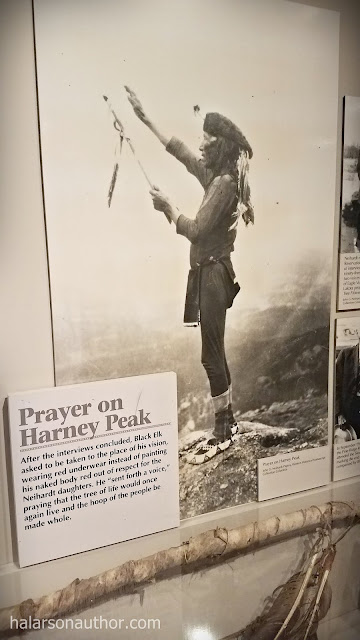 Also in the same exhibit is a picture of Black Elk giving a prayer at Harney Peak. This was interesting for me because in July I was in South Dakota where I climbed Black Elk Peak. It used to be called Harney Peak but was renamed Black Elk Peak in 2016. 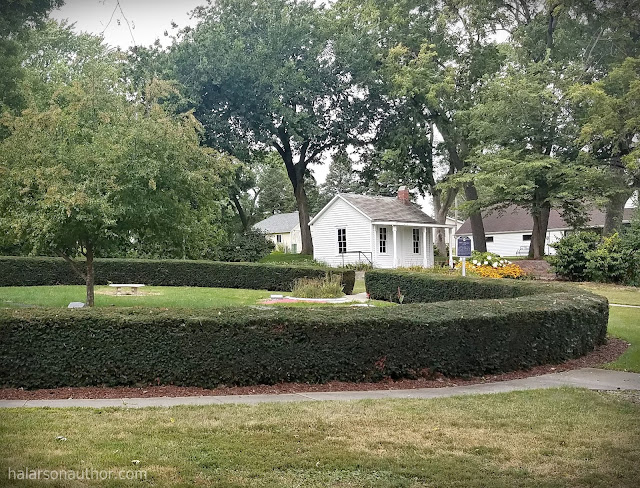 Also on the site is the one-room house where John G. Neihardt did his writing. You aren't allowed to go in, but you can peek through the windows into the simple building. 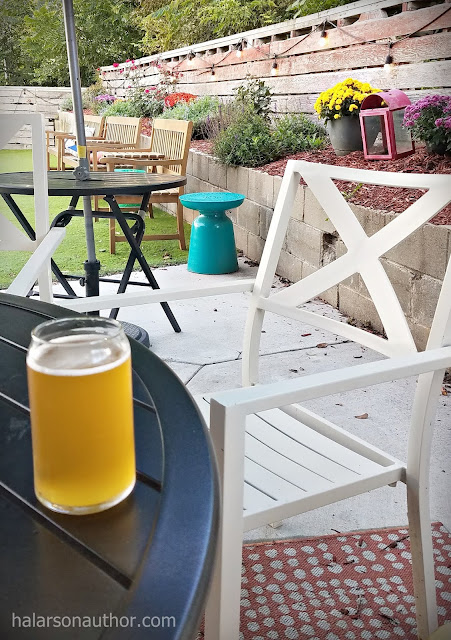 After the JGNHS, we headed towards home. We thought we'd stop at Chatterbox Tap House in Tekamah for a drink. I like a good beer now and then, so tap houses are typically a great place to get a quality beer from a local brewer. We were disappointed in the level of service and how they didn't have menus for food nor for the brews on tap. I finally squinted hard enough at the taps to figure out a beer to try. 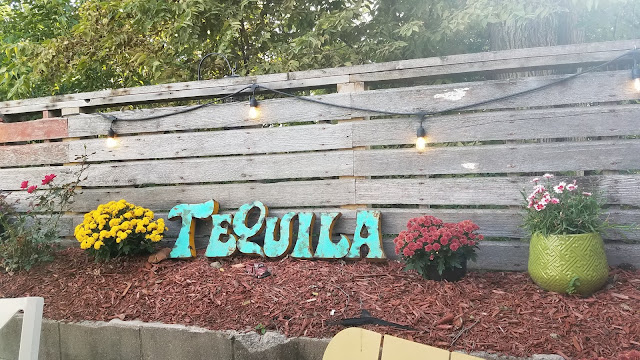 The only redeeming factor about the place was it's quiet and cutely decorated backyard area. It was cozy and the kids played the yard games they had while Libby and I drank our beer.

All in all, I'd have to say that the Garden Path Tour was a lot of fun. There were so many places we could have stopped but we only had one day. But, since this is an annual event, we decided we should go each year so we can go to different stops on the tour. Another thing I really liked about the Garden Path Tour was that it fit nicely into my day-trip criteria: cheap/free activities, a variety of things to do, and taking paths lesser-known. It was a fun, inexpensive way to spend time with my daughter and my friend, all while learning new things.

I hope you have a great weekend, my friends. I'm heading out later today for a few hours north where I'll be attending a big tour. I'll be seeing some of my favorite metal acts. I'll probably blog about it later.

My latest review/interview with the band Fluids is up on Slime&Grime, and you can check that out here: https://www.slimeandgrimeomaha.com/post/fluids-an-icky-sticky-extra-saucy-friday-the-13th-interview-album-review

My online discussion series with Politipeeps and Dr. Mathias Nordvig is up on YouTube, you can check those out here, here, and here.