For the Love of Good Food

Food. Where would we be without food? Not only do we need food to survive, but we turn food into delicious creations that please the senses. I've always been a fan of food, more than I should really, but over the past few months I've been changing my relationship with it. I eat more mindfully and, as a person who eats a plant-based diet, I eat a lot of fruits and veggies. Recently, two things have happened in my life that has put food squarely into the limelight: Aldi & Bountiful Baskets.

I've always been a fan of Aldi, but over the past few years, they've made a commitment to carrying better quality food. Their products are now artificial color- and flavor-free. They have an inexpensive, great selection of produce, and a better selection of items in general.

Aldi's black label pasta is one of the items they don't always carry, so when I see them I grab them. They are unique shaped pasta with herb packets. Typically, I will cook the pasta along with some kind of protein, make a white sauce using the herb packet, and then toss it all together. 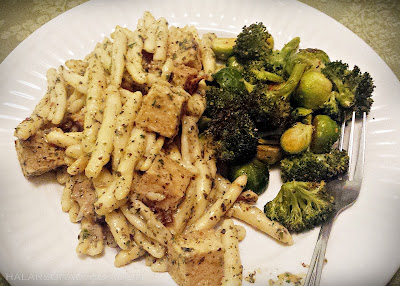 I used that pasta and herb packet - along with some crispy, baked tofu - to make this yummy meal. The broccoli and brussel sprouts also came from Aldi (less than $2 each!) which were roasted in the oven with a bit of olive oil, salt, and pepper.

Recently, in addition to the plant-based items they already carry, Aldi introduced a limited-time vegan line which I'm hoping they carry full-time in the future.

On top of all this good stuff, they built a brand new store, literally, behind my house. It's so easy for me now to grab the inexpensive basic foods that I use and consume.

I first heard about Bountiful Baskets from my supervisor at work. It's a food co-op where all the money put into it goes back into purchasing an array of fruits and vegetables that are local and in-season when possible. There's the standard basket that is $18.00 every two weeks ($3.00 extra for your first time) and a variety of add-on packs for additional purchase if desired.

My first time picking up was awesome. I was really impressed with how much I got for my money. Just look at all of it!

Those orange fruits down at the bottom are persimmons. I've never had them before, but when I opened them up, they smelled and segmented like citrus fruit. I ended up making a jam with them that was pretty tasty.

The next time I ordered from Bountiful Baskets, this is what I got in my standard basket.

It was another beauty of food. While many apples and bananas were eaten, the kiwi and mangos weren't quite ripe yet. After they both ripened, we made a fruit salad with the leftover bananas, leftover apples, and all the mangos & kiwi. We put a nice amount of agave nectar on it, mixed it in, and ate on it for a few days. We had never tried kiwi before, and we all think it tastes similar to a Granny Smith apple.

In addition to the standard basket, I also purchased the Soup Pack add-on.

Nature Girl and I chopped up everything but the potatoes and put it in a ziplock baggie. I mean, I had a soup pack so I was going to make soup! The next evening, I did just that. We used every ingredient then added some veggie stock, coconut milk, and other seasonings. It was amazing and reminded me of my Grandma's Awful Soup! (It was named the "Awful Soup" because you'd each so much of that awful soup that it'd make you sick!)

I have to say, getting in on Bountiful Baskets was a fantastic idea. You get different fruits and vegetables each time, so you don't get stuck (like I find myself often) buying and eating the same fruits and veggies all the time. The add-ons are cheaper than the standard basket and also vary depending on what's available. If you feed a family, you should really get in on this co-op. They are nationwide, so finding a location near you should be doable for most people in the States. Head over to their website to find out more info: Bountiful Baskets.

Incidentally, when I found myself wondering what to do with all the cranberries and extra fruit from my first basket, I made schnapps: 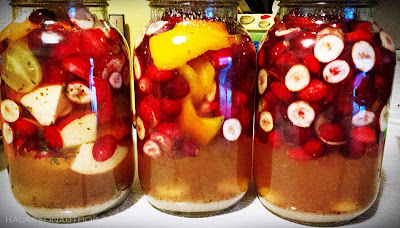 Waste not, want not! They'll be ready in March and I'm a bit excited to see how it turns out. I will let you know. Until then, happy eating.