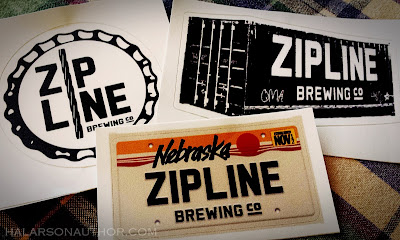 Last month, I had to go to the Lincoln, NE, area - about an hour from my home - for business. Two of the people I was there with just happened to be the two ladies that I took the Central Nebraska Brewery Tour with. With three beer aficionados around such as ourselves, there was no way we weren't going to end the day on a frothy note.

There are a few breweries in the Lincoln area, but the two we decided to visit that day were Zipline Brewing Co. and The Boiler Brewing Co. I've had, enjoyed, and reviewed here, plenty of Zipline brews in the past, but had never had the chance to visit their brewery. 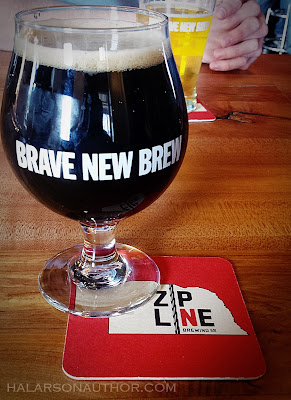 First beer of the day was Zipline's Coconut Stout. A true, heady stout with notes of coconut, this brew is not to be missed. For those of you who think you hate coconut, try this. The flavors of toasted coconut really complement the chocolateness of the stout. 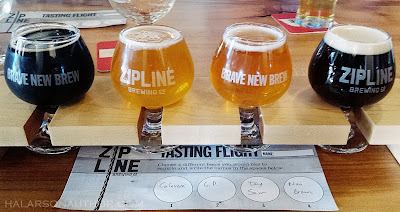 Instead of going for a second beer, I decided that I really ought to have a flight. From left to right:

1. Calaveras Stout: an impressive Imperial Stout that was strong, delicious, and a cut above. If you are unfamiliar with an Imperial Stout, they are typically barrel-aged, this one in bourbon barrels, and are often brewed with a variety of flavors. This one is chocolate, vanilla, chilis, and cinnamon.
2. Green Phantom: This is a Farmhouse Ale that is brewed with a new kind of hop. While hoppy beers aren't typically my favorite, this one was light and sharp, making for a nice contrast to the headiness of the Calaveras.
3. Tangerine Sour: Ahh, these kinds of beers are my favorite drinking beers. Fruity, sweet, and sour, it's very lovely.
4. Neapolitan Brown: a standard brown ale, only brewed with chocolate, strawberry, and vanilla. It's like a neapolitan cake in a glass! Delicious. 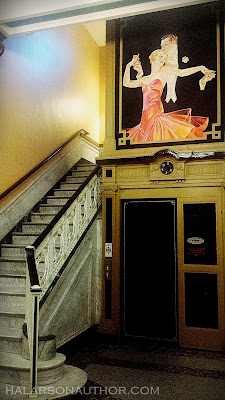 After some fantastic brews at Zipline, we headed over to The Boiler Brewing Company on the suggestion of our Lincoln friend. It's housed in the basement of The Grand Manse, an old building that was once the U.S. Court House and Post Office of yesteryear. You have to go through the main floor to get to the brewery, and it's like walking back in time. 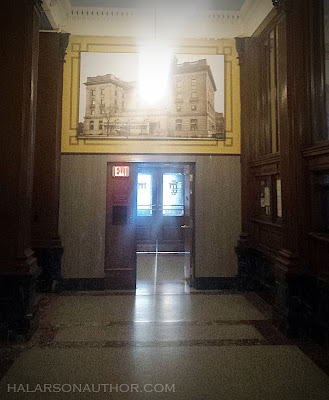 The building has retained much of it's original decor and design, and it has pictures on the walls to help share it's history. 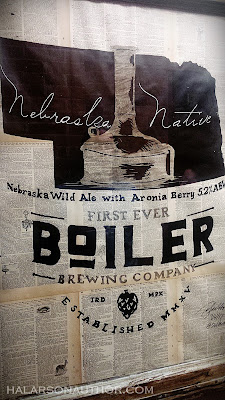 Just walking down the hallway to The Boiler Room was interesting. I really admired this neat sign they had made with old newspaper clippings. 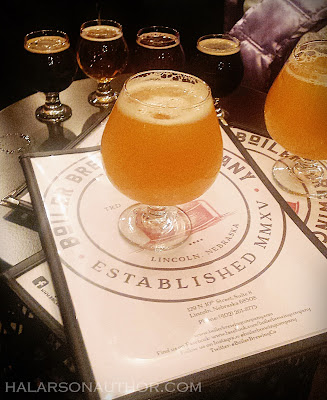 As we had already had a good amount of beer - and needed to drive an hour home - we only ordered one beer (well, at least those of us driving the distance home). I settled on something that seemed fruity and mild: Orange Whip Mimosa Gose. Oh, this is heaven in a glass! It was so delicious that I actually brought home a crowler of it. A crowler is their version of a growler, which is really just a 32-ounce can that they fill and seal. This gose is full of orange juice pulp, and it's perfectly balanced in sweet and sour. I could drink this all day, officially making it the most dangerous (and delicious) beer I've ever had.

I hope your Saturday is excellent. I'm set for a busy weekend, working in my other endeavors. I'll be back soon for something fun. Stay tuned!