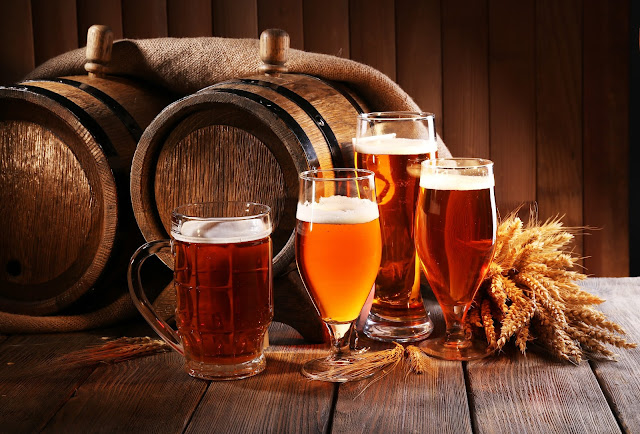 This past weekend, I got to take a brewery tour through central Nebraska. Now, it didn't start off to be a tour of a few breweries, but rather an afternoon to do lunch with a few ladies then tour one brewery: Scratchtown Brewery in Ord, NE. The reason we chose Scratchtown is that one of the ladies knows the owner, and they were going to give us a tour of the place. Alas, fate had other plans, and we weren't able to get the tour. 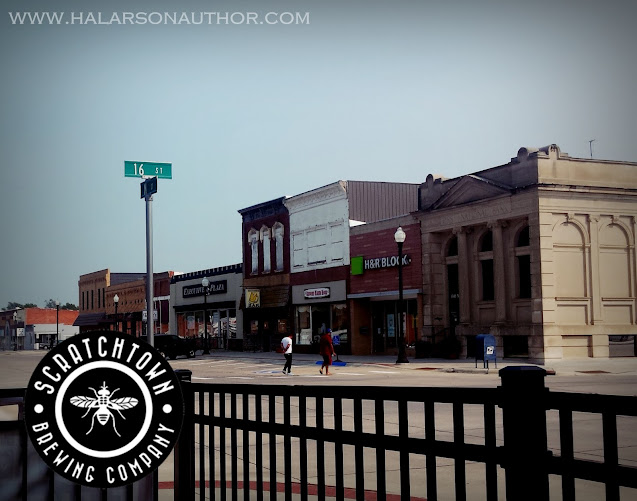 That didn't stop us from sitting on the nice patio of the brewery and having a beer on a gorgeous day. 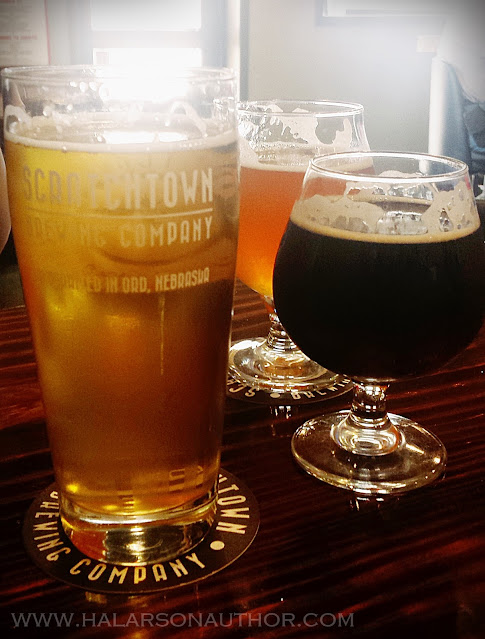 The tall glass is mine, and it is their Popcorn Daze Ale. While it smelled more like popcorn than tasted like it, I enjoyed this light, yet tasty, beer. After this beer, I had the one on the right called Hills and Hollers. It was a deliciously dark, yet lighter tasting, chicory ale. I wouldn't hesitate to call this my favorite out of the two.

After a couple of beers and some complimentary pretzels, we formed a plan for what we should do next. Since we weren't able to take the tour, we felt like we needed to check out at least one other brewery. An older gentleman, who was leaving as we were sitting on the patio, suggested we drive northwest into Taylor to try Bootleg Brewers. It was going to be a long drive, but we decided, "Why not?" 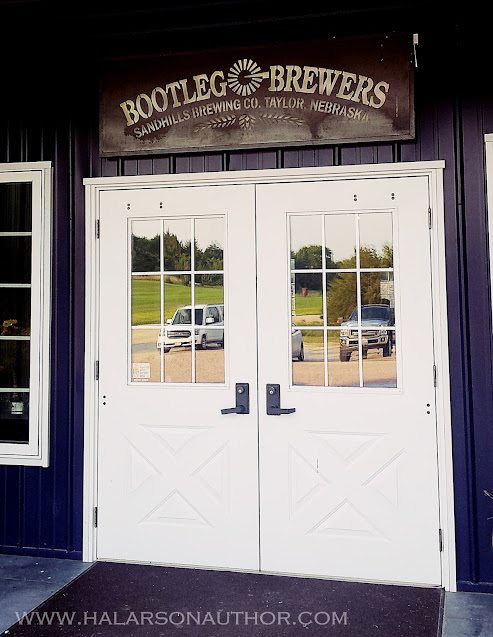 Bootleg Brewers is located north of Taylor, NE, and set about three miles in a valley off the main road. Halfway in on the gravel, you finally see a gate and sign that designates where Bootleg's property begins. Located deep in the sandhills of Nebraska, the setting for this place couldn't be any more beautiful. 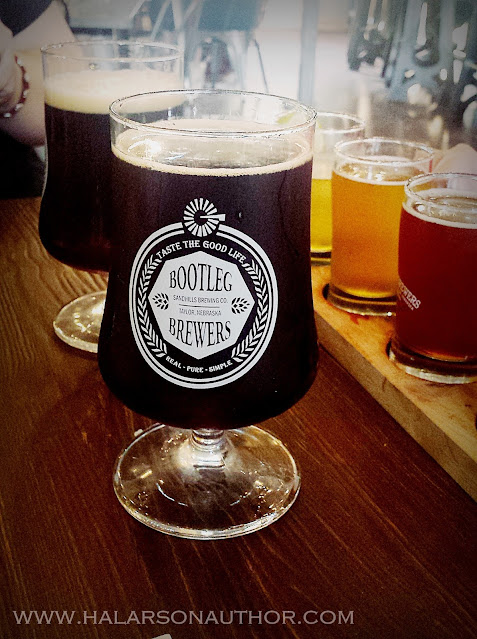 We were pretty hungry by this time, so I ordered some battered mushrooms and sweet potato fries, both delicious. To go with it, I ordered a Muddy Duck, a perfectly brewed English Brown Ale. If you aren't sure what a brown ale is, think Newcastle or Samuel Smith Nut Brown Ale. Bootleg's Muddy Duck was probably my favorite dark beer of the day. Dark, mildly nutty, and chocolately like a porter, I could easily see myself drinking this on a regular basis. 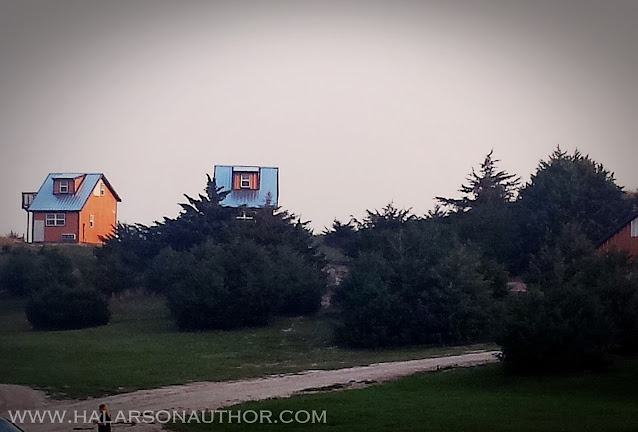 One of the neat things about Bootleg was the cabins situated to the left of the brewery itself. We were told that they are rentable, and this makes total sense as the brewery is way out in the middle of nowhere. One could easily make a night or two out of their trip, especially when live music is playing on the weekends. 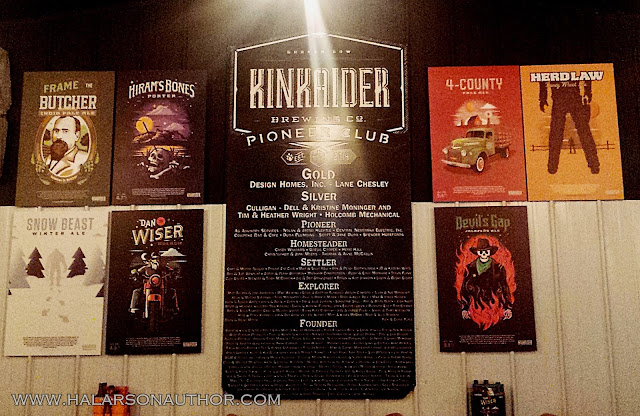 Since we were already way out in the sandhills of central Nebraska, we figured that we might as well make our last brewery stop at Kinkaider Brewery in Broken Bow. Now, if you've read any of my past Latest Libations, you'll know that I've had and reviewed Kinkaider before. 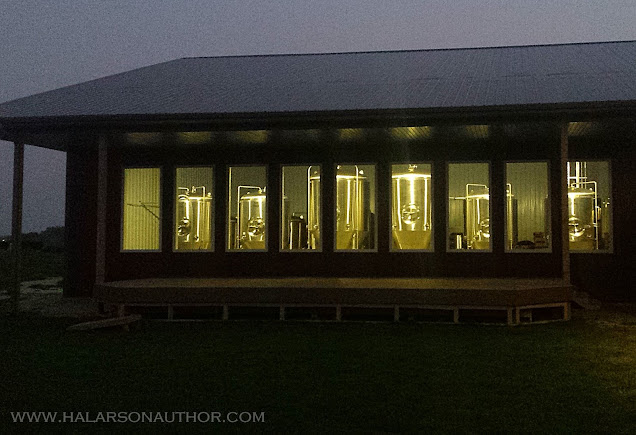 You can sit on their back deck and see their brew tanks. Very cool indeed. 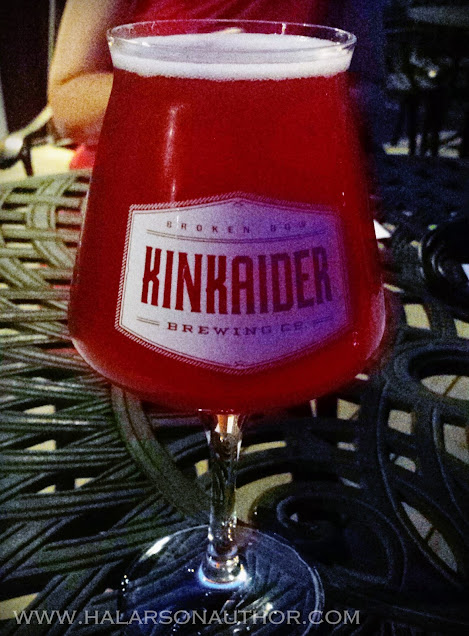 I started off with Snozzberry Sour, a delightful, lightly fruity, sour ale. 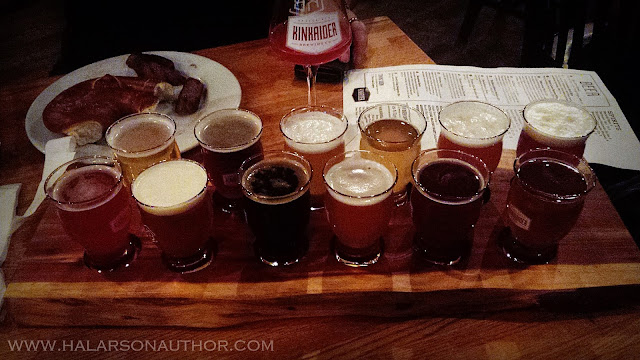 Since this was our last brewery stop, two of us decided that a flight would be a fantastic idea. Not only does Kinkaider have a standard sized flight, they also have the ultimate flight: The Dirty Dozen Sampler. Simply put, you can get a flight of all twelve of the brews they have on tap. At $18 for 12 four-ounce flights, it's about $6 per 12 ounce beer. My friend and I split the flight, and we also gave a couple of them to our other friend. We enjoyed it immensely. Because the tap brews change, here's the twelve we had, starting on the top left and continuing on the bottom left:

We discovered that 7 and 12 mixed together were quite delicious, just as an FYI.

What a fun, unique way to spend the day! We had so much fun that we've decided to make this an annual thing. Since it took so long just to drive from home, and then from place to place (I left my home at 9:45 a.m. and didn't get back until 3:00 a.m.), we also decided that it's probably better to rent a place for the night. I don't know about you, but I have my eye on the Bootleg Cabins.

Until next time, happy drinking!


Labels: Adventures in Travel Food and Libations The Great Outdoors