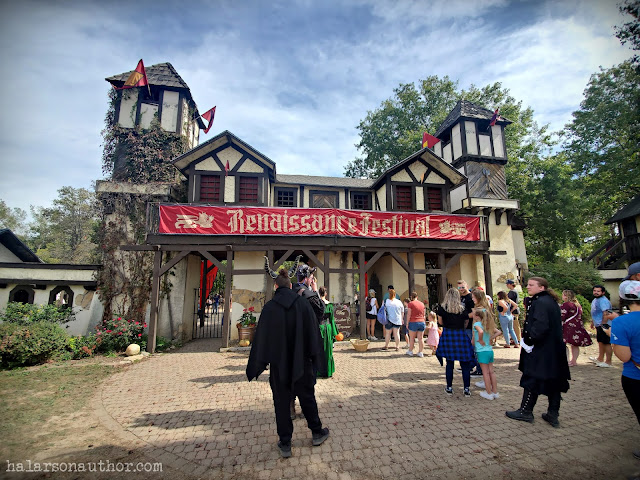 By now, my dear reader, you are no doubt aware of my love for all things Renaissance, particularly Renaissance Faires/Festivals. Every year I go to the Nebraska Renaissance Faire (rivals any big one!) in the Spring, and then, come Fall, I try to hit up either the Minnesota, Des Moines, or the Kansas City Renaissance Festival. Most years, it's Kansas City and this year was no different.
Walking up to the King's Gate always elicits some excitement from me. 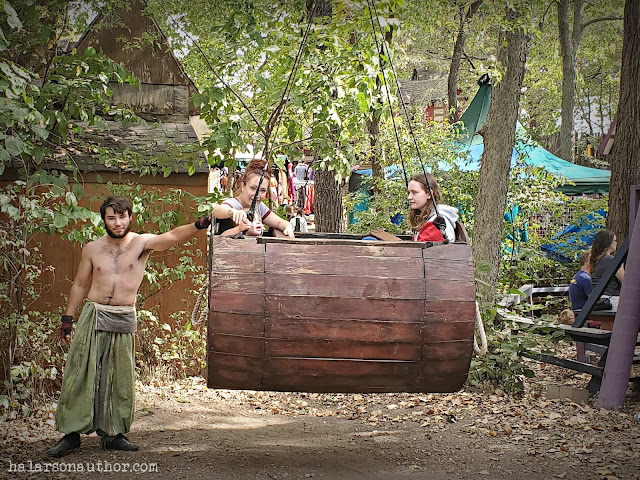 This year, my daughter and I drove down the day of the Festival and met up with my friend Audrey, her daughter, her grandson (so cute), and her friend. They met us over by the Children's Grove where our daughters and the grandson hopped on the Barrel Ride. After that, it was hard to keep us all in the same spot, so Audrey and her crew went off to do their own thing while we did ours. 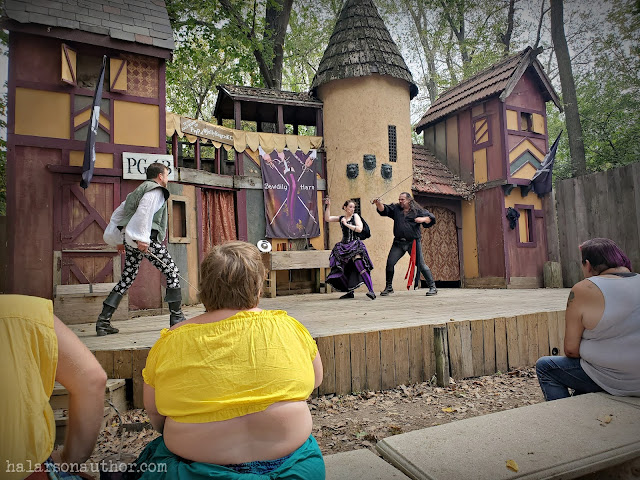 While my daughter took some time to relax in the Sky Chairs booth, her favorite, I kept close by and was entertained by Bawdily Harm. They are a staple at the KCRF and I've seen them at least four times. It's always a good rousing time! 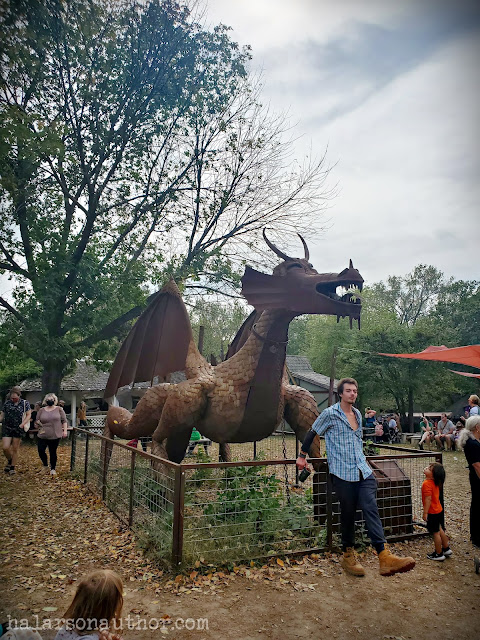 Ran across this dragon. This brave fellow wasn't even worried about whether that dragon was going to fry him with its fire breath! 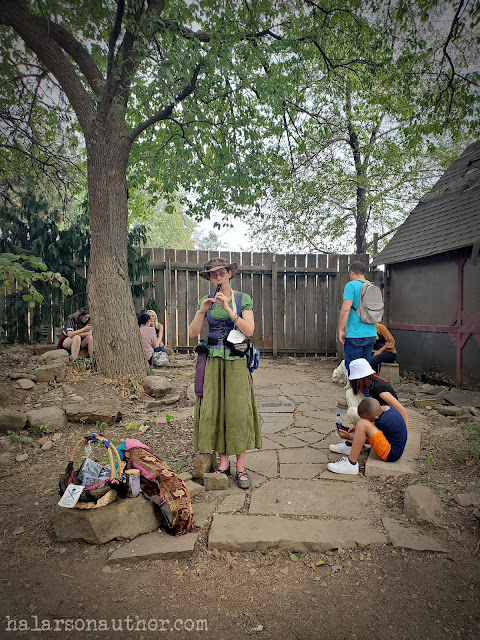 This was the busiest I've ever seen the KCRF, reminding me of the Minnesota Renaissance Festival, so one had to wait in line for quite some time to acquire food and drink. Fortunately, Gwyneth Whistlewood was there to entertain us while we waited. Pro tip: if you go to a festival with long, long lines, double up on everything you purchase and if you're getting water, quadruple it if it's a hot day. 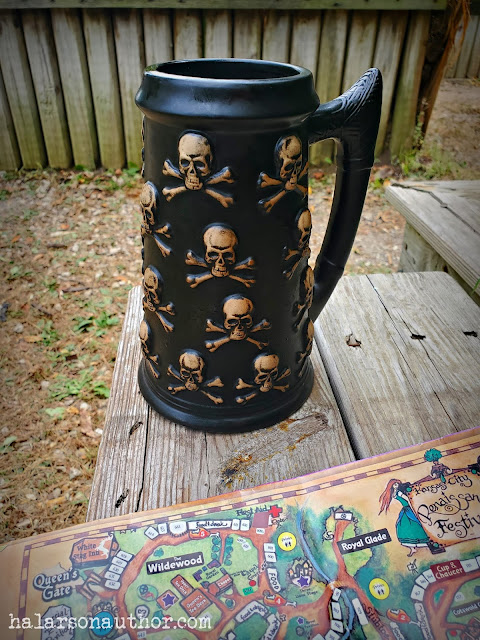 Many KCRFs ago, I bought a short & stout mug with a skull and crossbones on them, made by a local potter. I named it the Jolly Roger and he served me well for years. Unfortunately, he suffered a terrible accident during my move back in May, and I had to lay him to rest. One of my missions - besides drinking meade and eating a funnel cake - during this trip was to purchase a new one. I found this handsome mug and promptly bought it. Its name is the Jolly Rogers...I mean, there is more than one skull & crossbones on it. 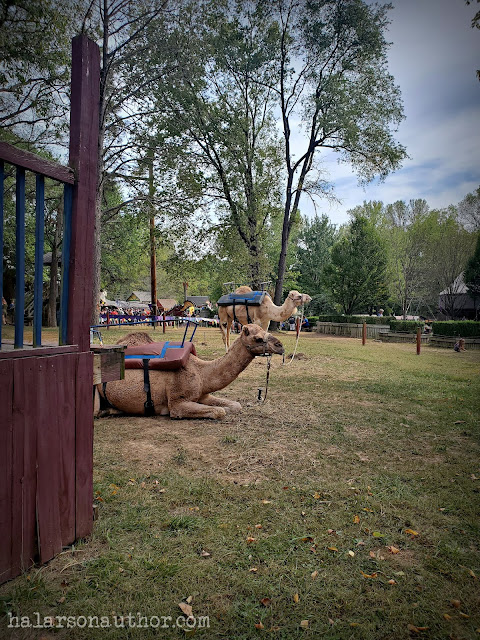 We ran across these fluffy camels and I asked my daughter, animal lover extraordinaire, if she wanted to ride one. She didn't, but she really wanted to pet one so I tipped the lady to make that happen. 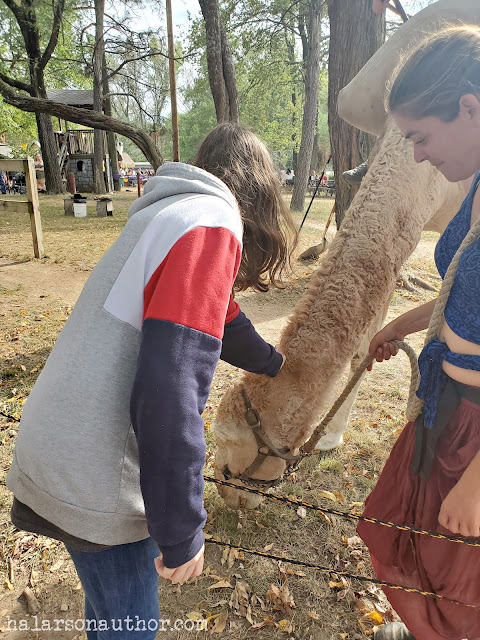 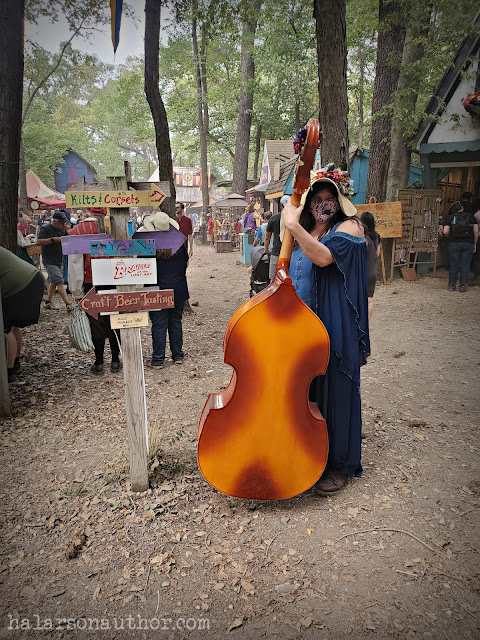 At the corner of Yarn Booth & Dice Maker, we were serenaded by this standing bass-playing wench, but alas, I do not know her name. 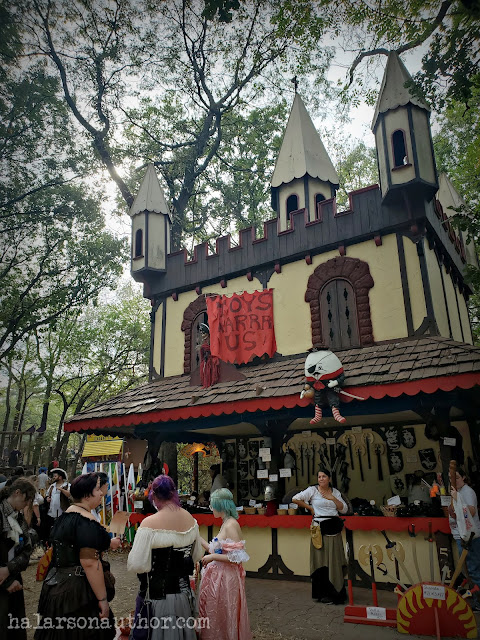 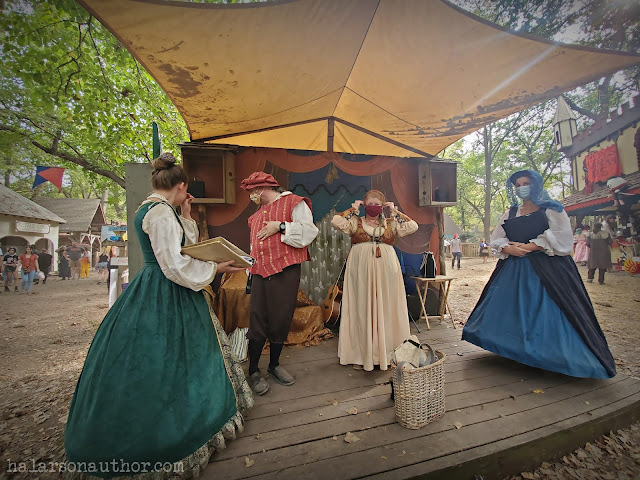 We always try to go to the KCRF in October as the weather is generally cooler, but this was an unusually hot day at 92 degrees F. We stopped at the Old North Bramble stage in the Dunwoodie Dell to take in the Madrigals Bar Nonne. They were delightful, as always, to listen to! 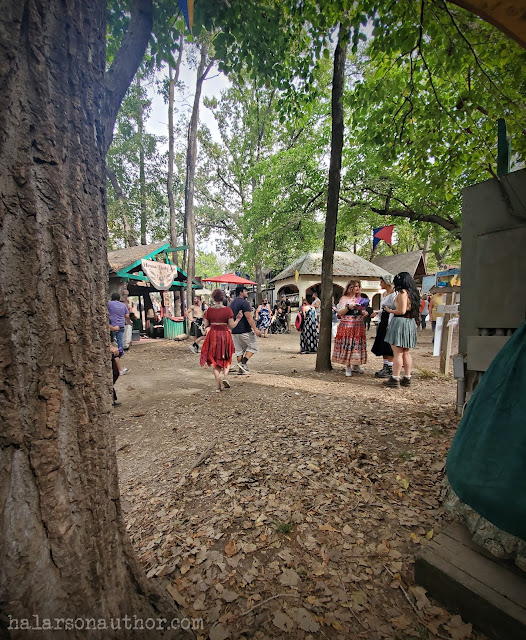 Folks mingling in the shire. 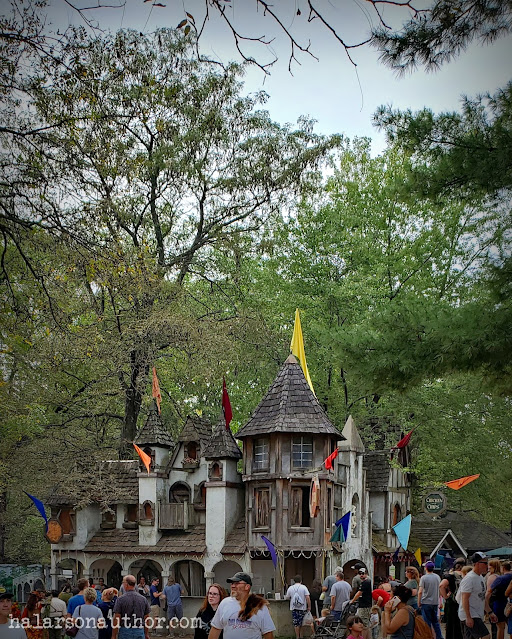 What's a fest without a Beer Castle? 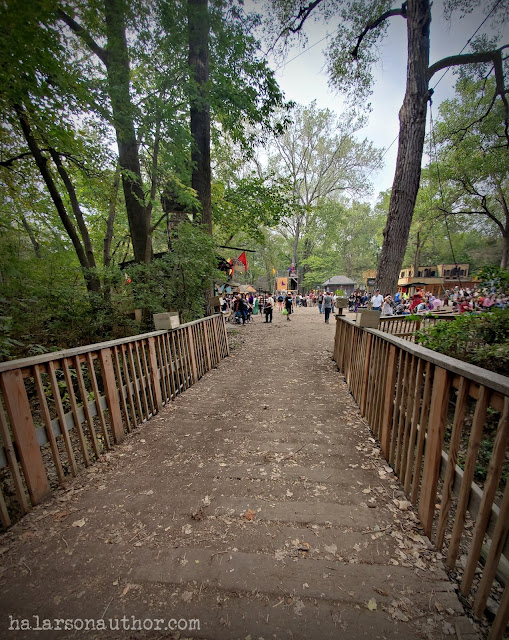 One of my favorite side paths. It's never quite as crowded as the others. 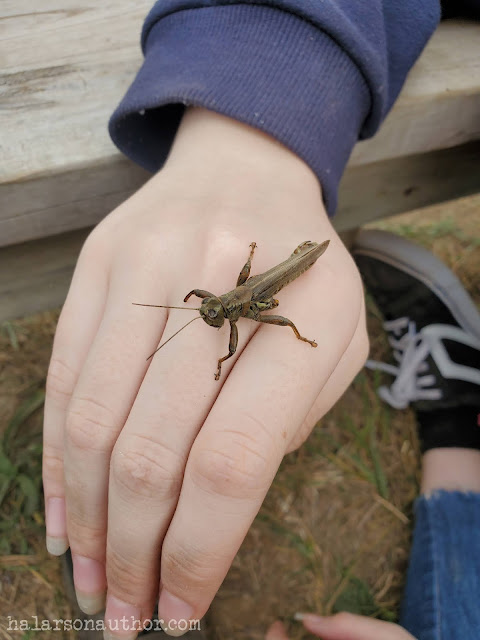 I always make the 5 o'clock Joust. It's the full Joust of the day and one of my favorite events at any RenFaire. While we waited, my daughter found an injured grasshopper and was filled with care and concern. Of course, he came with us. 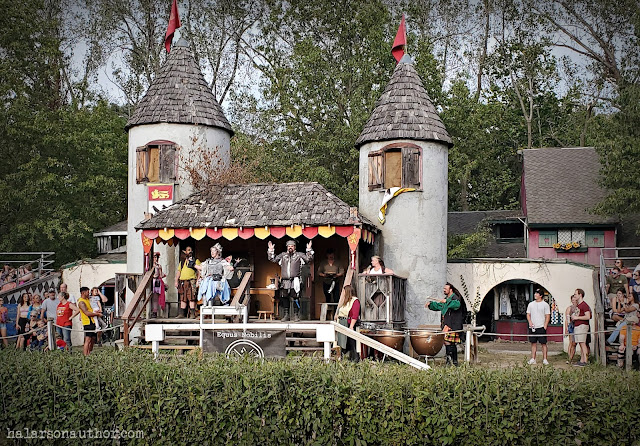 Time for the Joust! King Henry VIII presided, of course, but this year, it wasn't his Queen, but rather the Fairie Queen. Hmm, he must have beheaded his Queen. 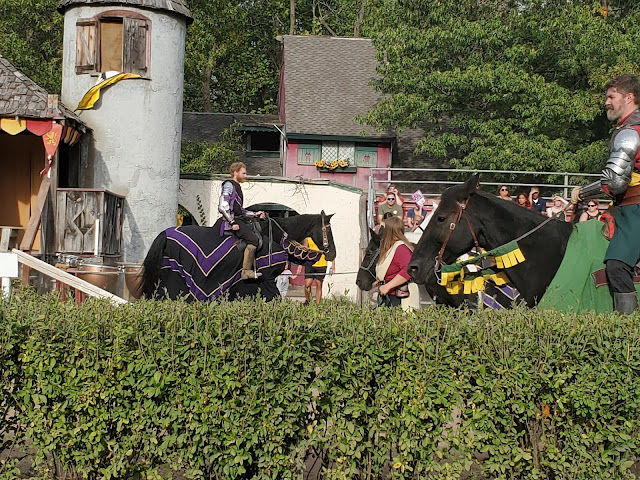 Our Champions, Sir Something, and Sir Or Other. Okay, so those aren't their real Ren names, but I don't remember what they were. 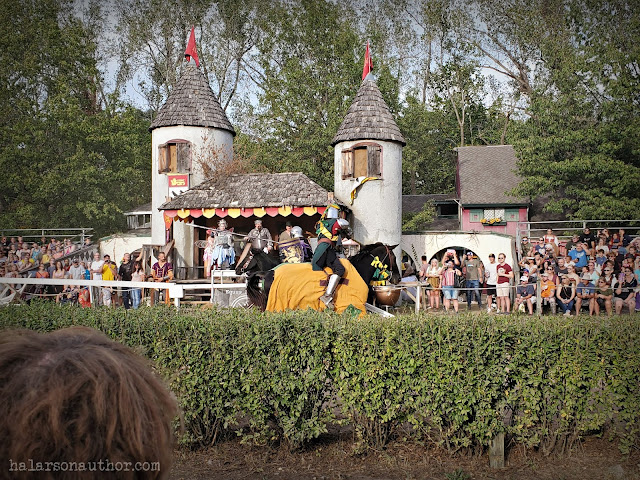 First, they fight on horseback. 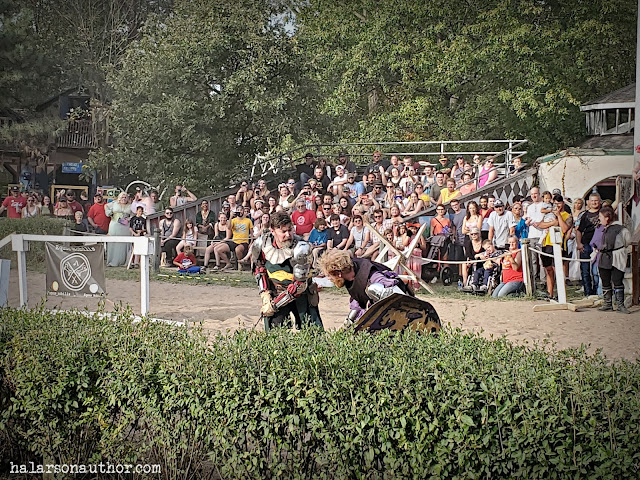 Then they fight on the ground in hand-to-hand combat. Huzzah! 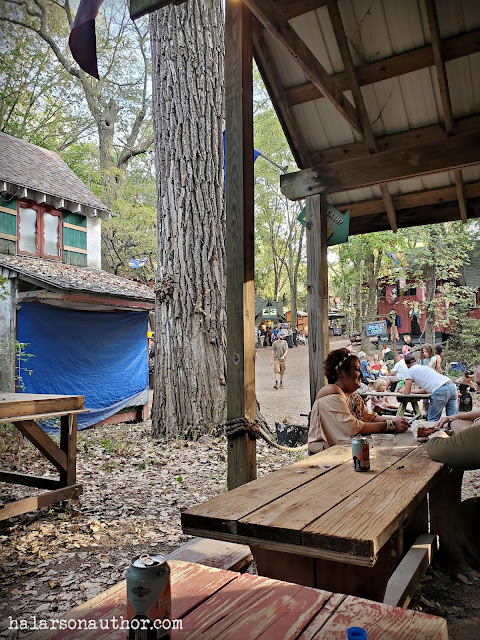 After all the Jousting excitement, we stopped at the Pirate Pub so I could get a fresh grog and my daughter could make a temporary home for the grasshopper. 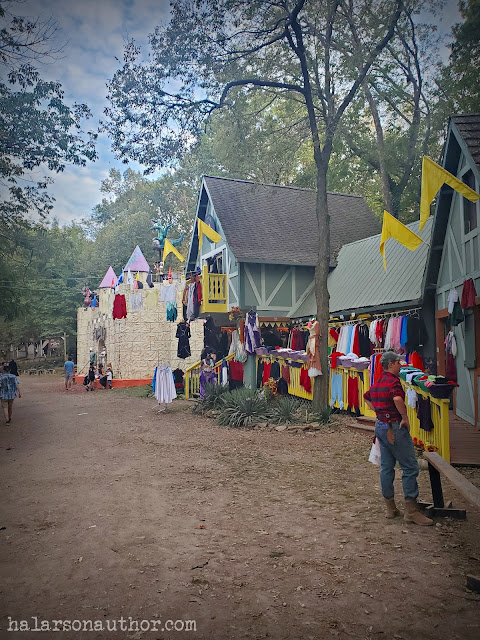 This year, I made sure to take pictures of the market rows. It's magical to see all the vibrant colors and take in all the smells. 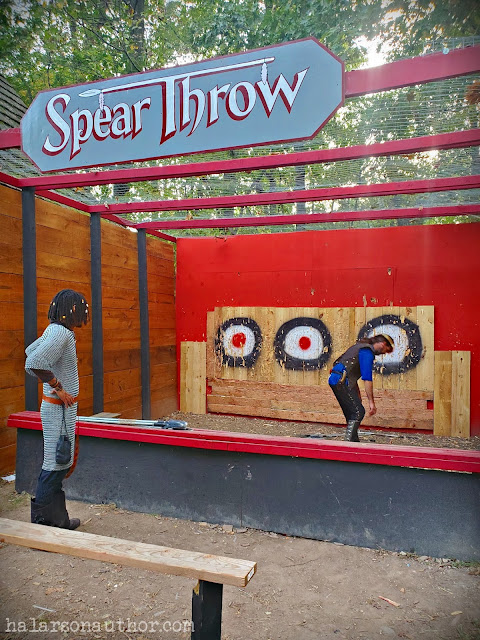 I even tried my hand at spear-throwing this year....and I sucked at it. 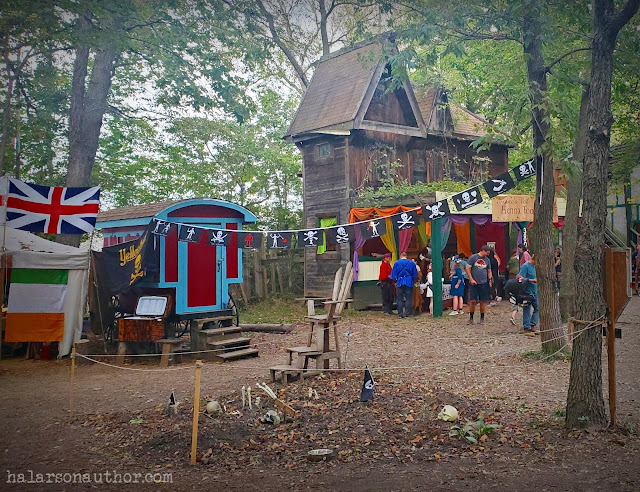 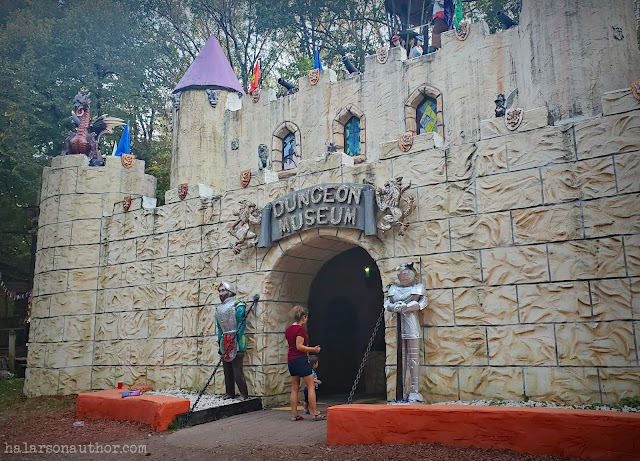 The Dungeon Museum cost to go in, and so I decided against it. It costs a pretty penny to get in and so do all the food & drink, so I tend to opt for the free entertainment most of the time. 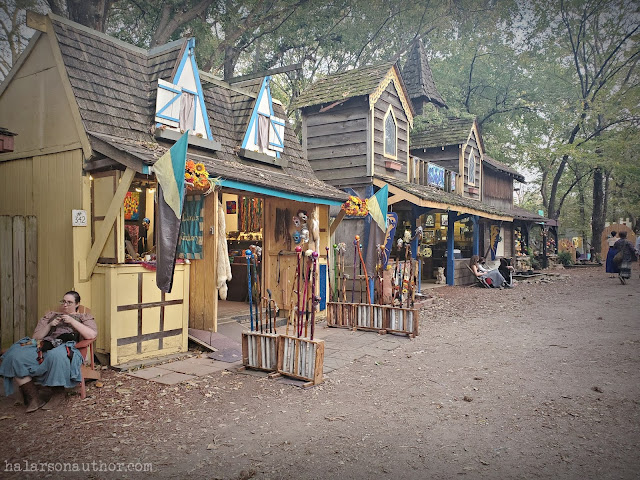 We stayed until the very last this year, and it was nice to finally be able to move more freely as the crowds had thinned considerably by then.
It was fun as always, but it was more relaxing than I expected. Maybe it was just because it was me and my little girl, but I felt unrushed, unhampered, and freely able to do exactly what I wanted to do this time around. Like always, though, there never seems to be enough time to see and do everything I want. I guess that's why I keep going back. Every time I go, it's a different experience and I see, do, and eat a combination of the same and different things.
Until next year, thanks for the memories KCRF!
Labels: Adventures in Travel Musings