Discovering Western Nebraska, One Winery at a Time

When I first embarked on my Nebraska Wine Passport journey at the beginning of the year, I knew a trip out West with one of my participating friends was in the cards. I mean, how else are you supposed to cover the state in a year unless you get out there? Never mind that I completely spaced getting my passport stamped when I was ALL the way out west-west in Scottsbluff a few months ago - I'm still kicking myself for that one, honestly.

Anyway, said friend was one of my besties, Rebecca, and we took an overnight trip out to North Platte and back to discover some wineries on the passport. Our plan was ambitious: stop at three wineries on the way to North Platte, check into our hotel, then go to the winery in North Platte before having a late dinner. Then, we were going to go to Buffalo Bill Cody's Ranch in the morning and hit up two more wineries on our way home. Turns out, that plan was a little too ambitious, but we were open to any and all possibilities, so here's how it went instead. 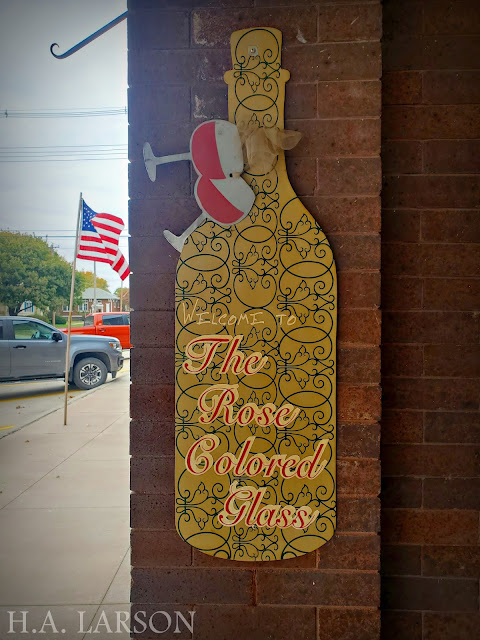 Our first stop was in Stromsburg, Nebraska, to visit one of a handful of tasting rooms, The Rose Colored Glass. I was quite impressed with the other tasting room that I've been to, so I had high hopes. I wasn't disappointed as we were greeted by the owner, Bob, who was very knowledgeable about Nebraska wines (as any good tasting room should) and interesting to talk to. 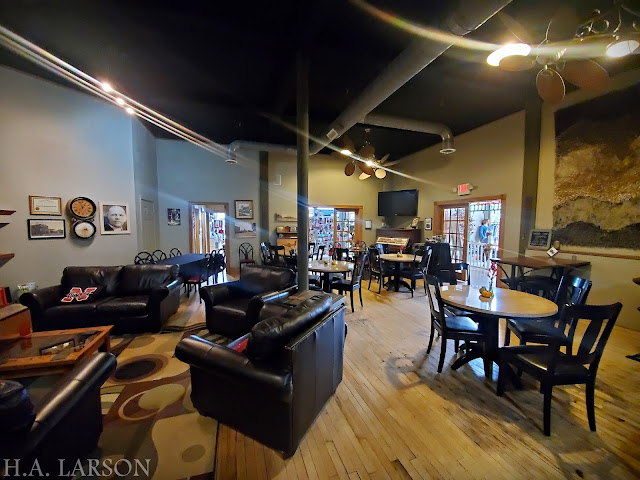 This tasting room is in an old building that Bob purchased and restored, with a bevy of unique tenant shops in the other bays of the building. 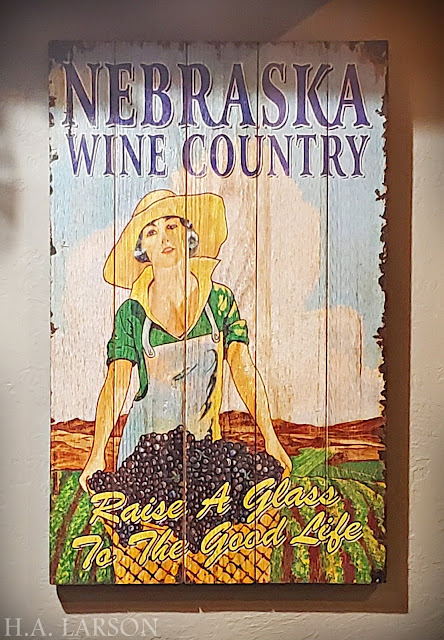 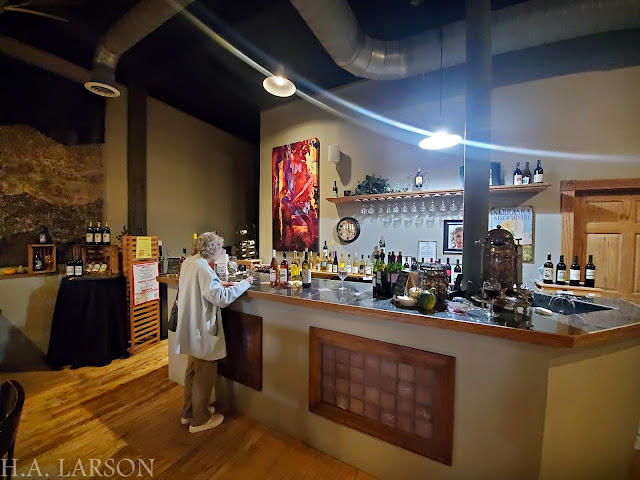 We sampled some wines from places we hadn't tried before. There's a fireplace surrounded by comfy chairs and couches and as it was a chilly day, we asked Bob if he wouldn't mind turning on the fireplace. He happily obliged. 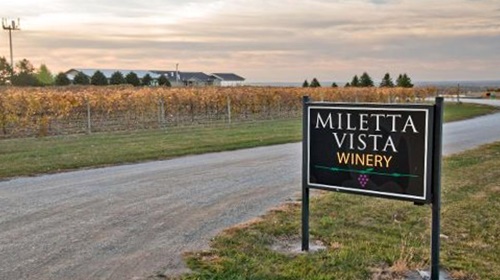 Our next stop was at Miletta Vista Winery near the town of St. Paul, Nebraska. 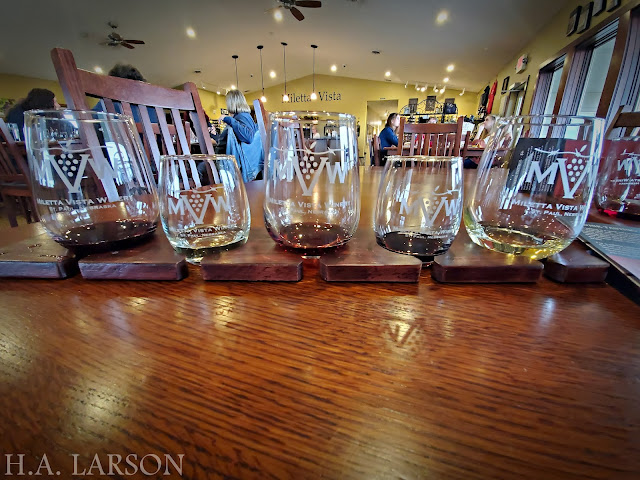 They had a nice selection of whites and reds, and I found a new favorite in their Work Horse red. I enjoyed it so much so that I bought two bottles - one for me and one to share. This place also serves some fantastic food, so we were told, that pairs well with their wine. 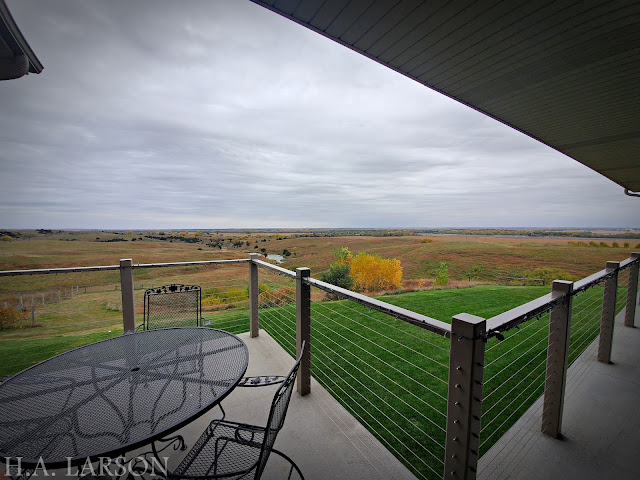 Positioned on a hill overlooking the plains, their scenery was gorgeous! If the weather had been nicer, I would have opted to sit outside. 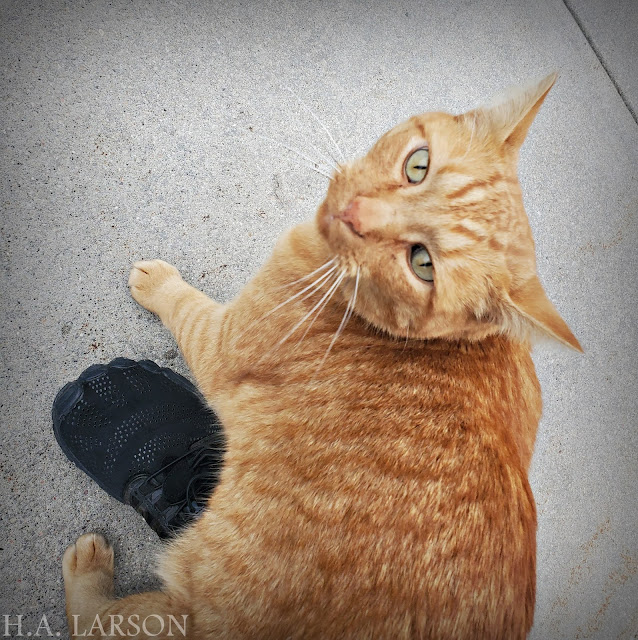 Bonus? Getting to meet and pet this friendly fellow on our way out. 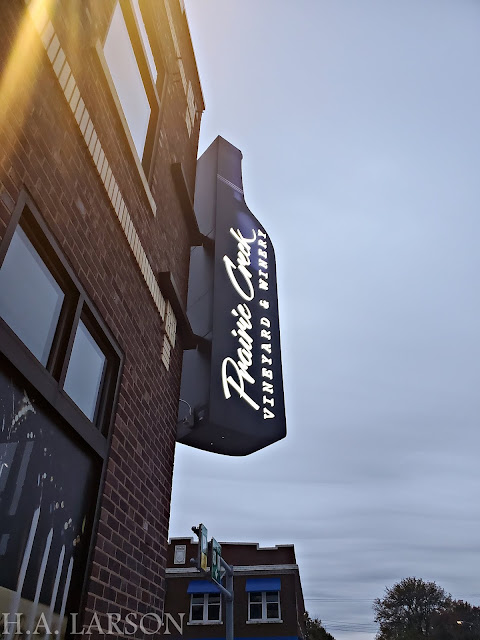 Our third stop was in Central City, Nebraska, at Prairie Creek Vineyard and Winery. 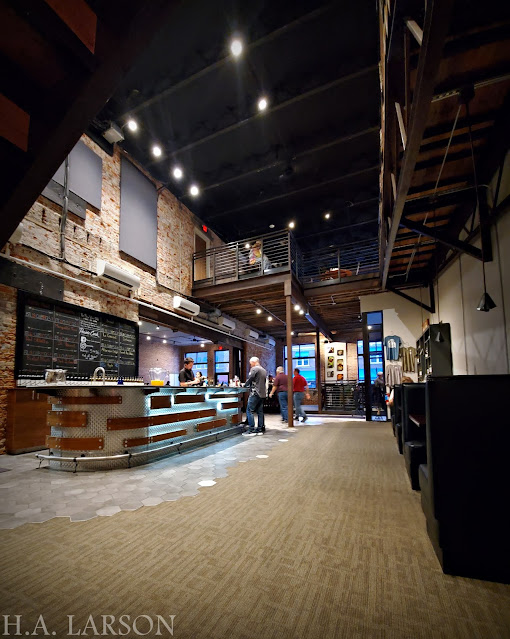 It was incredibly busy, as they sell higher-end food in a small town, so we had to stand up at the bar area for our tastings. Maybe because they were so busy, the man working the bar forgot to be friendly (at first) and we got an unwelcome vibe. We still got a wine tasting and, after some time had passed, the gentleman apologized for being so busy and thanked us for our patience.
Even though there was no open table for us to sit at, there were a couple of comfy chairs where we could sit and people-watch. After we each picked our favorite wine to have a glass of, we sat down in them to relax and enjoy. 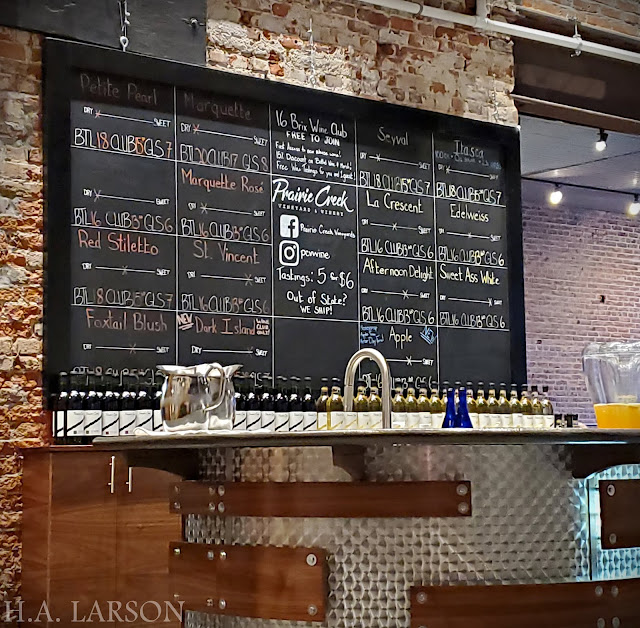 By then, we realized how late it was and that we had lingered a bit too long at the wineries we had already visited, so we decided it would be best to skip the last winery on our journey and get to North Platte before their winery closed.
Unfortunately, by the time we made it to Grand Island, it was after 7 pm. We were hungry and with two more hours to drive to North Platte, we knew we weren't going to make it in time. Instead, we chose to get something to eat in Grand Island then drive to our hotel for the night. We eventually made it there at 11 pm and promptly went to bed. 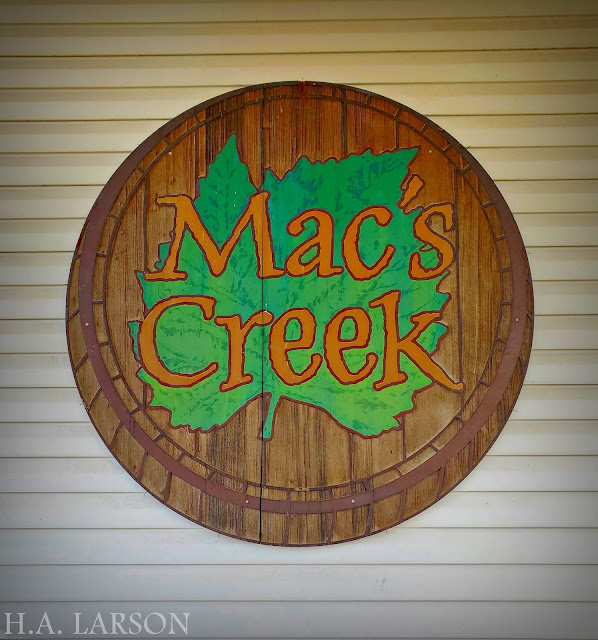 The next morning, we went to Buffalo Bill Cody's Ranch as it opens much earlier than any winery -  but that's for another post. Realizing that the first of our two wineries for that day didn't open until 1 pm, we opted to choose just one to visit. After all, it was still a 3.5-hour drive home from that winery and we both had to go to work the next morning. Our choice? Mac's Creek Winery & Brewery since we had both enjoyed their Irish Jig white on our journey down Highway 75. 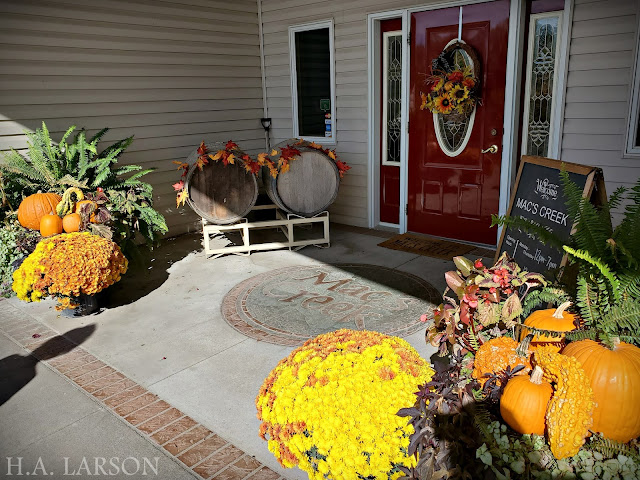 Situated right outside of Lexington, this winery also makes cider and brews beers. 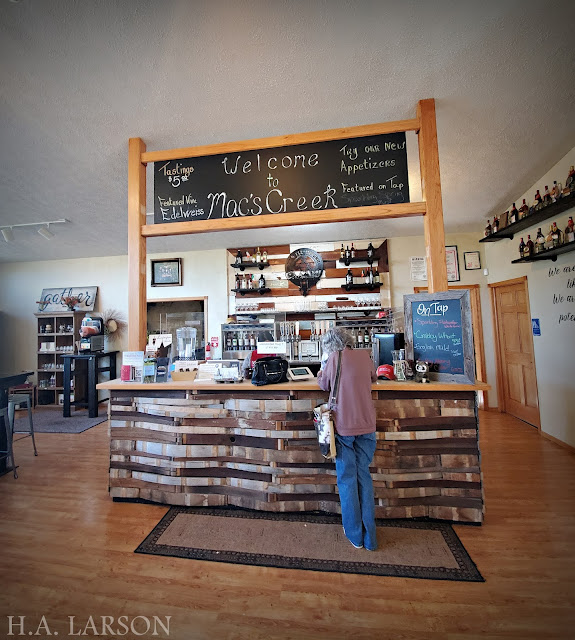 Besides the beautiful decor at the front of the establishment, their inside was also well-appointed. 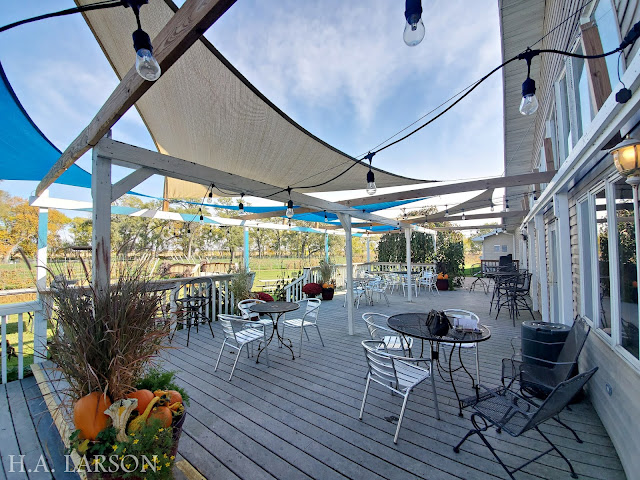 As was their back deck. Absolutely beautiful! 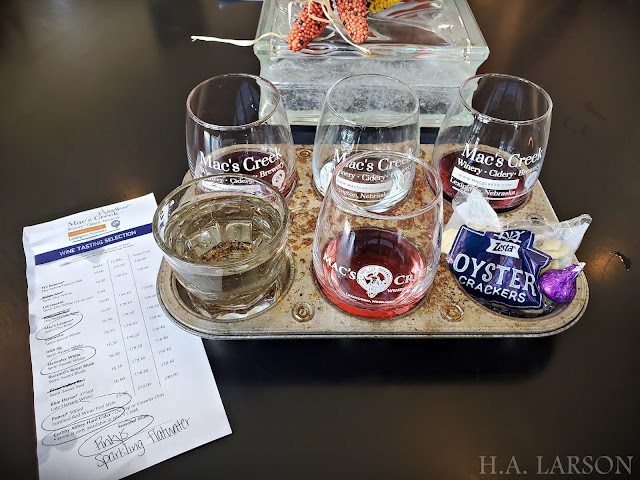 Back inside, I opted for the wine tasting of 5. I picked three wines, a cider, and some port (yum!). They gave me dark chocolate for the port and some oyster crackers to cleanse my palette. This doesn't really happen at other wineries I've been to and it was a nice touch.
All their offerings - with the exception of the beers which were just okay - were fantastic! Mac's Creek has some of the best wines in the state. I made sure to grab a couple of bottles to take home, including the port. 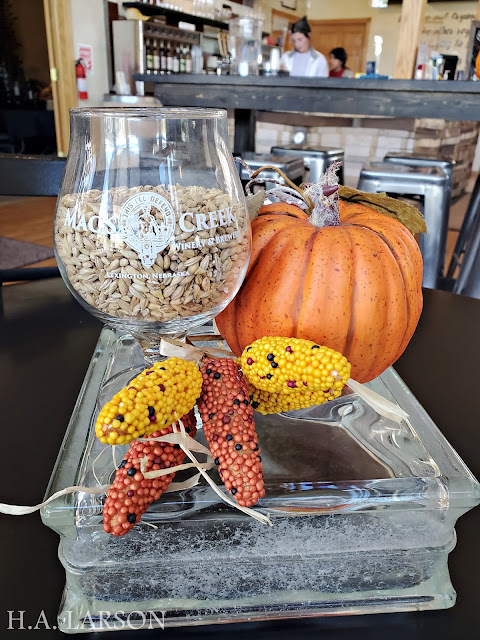 The table-toppers were so cute. Without a doubt, this was our favorite stop and, dare I say, my favorite winery in Nebraska. It sure made us wish it were closer!
Even though we had to skip two places, it wasn't a big deal. Regardless, we had a wonderful time seeing parts of the state neither of us had ever been to before, taking our first girls' trip together, and spending time elsewhere enjoying good wine and good conversation.
There's only a little shy of two months before we have to turn our passports in for prizes, and I think it's safe to say that I'm not going to make it to all 29 wineries. As it stands, I have 17, and I hope to have a couple more before the year is up.
Have a great week, friends!