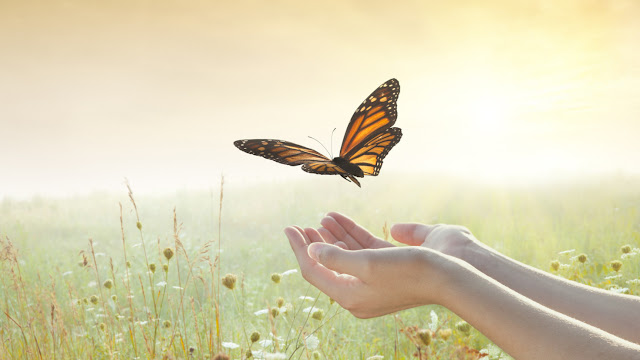 I've been thinking quite a bit lately about the concept of letting go. When I say "letting go" what is the first thing that pops in your head? For me, letting go always meant leaving the past behind. While that's definitely true, there are other things in our lives we let go of. Maybe it's the months of quarantine that have left me with more time to think, maybe it's just the season of my life for it, or maybe it's just how things are right now, but I let go of a few things this year.

I let go of my marriage

The first thing I let go of was my marriage and all of the baggage that was attached to it. There is a range of emotions that came with the end of my marriage and letting go of it was similar to riding a rollercoaster. Fortunately, I've been letting go for a few years already so I was really just at the tail end of it all these past few months. The tail end emotion I had connected with it was the anger I felt towards my ex-husband for all he put me through. What I was really letting go of recently, then, was being mad at him all the time.

I let go of my past

More specifically, I let go of the fact that my youth and all the promise it once held is over. I'm an older woman now, but that doesn't mean my life is over. In fact, there's a lot of life to live and a new beginning is around the corner, so letting go of the idea that I wasted my youth was important.

I let go of my oldest child

My oldest is nearly twenty-one and has been in college for the last few years. Because of this, we haven't spent much time together so the time we've been negotiating quarantine together hasn't been very smooth. I learned that we definitely clash on things and that it's time to encourage him to fly the coop. He just signed the lease on his first place so I let go of the baby he was to make way for the man he is.

I let go of my stepdad

My mom and my step-dad have been going through a contentious divorce over the past three years. While he was a good stepdad to me and a good grandpa to my kids, he was a horrible husband. Their marriage imploded and I never got any closure. He recently passed away unexpectedly and it left a weird space in my heart. The only closure I can gain now is to let go.

I let go of my first post-marriage relationship

When I was finally starting the mental gymnastics that go along with the end of a marriage, I found myself in a relationship. While it wasn't super-serious in many senses, it did last well over a year and became an important part of my life. As some things do, it reached a natural conclusion. While it left me a bit sad and wistful, I let it go.

I let go of social media

Back in January, I posted about giving up social media. I really enjoyed not using social media but then the pandemic hit and I was bored and isolated. It didn't take long to start using social media regularly, and it once again became a constant fixture in my life. With all the negativity that abounds in the world right now (and there's a lot), it was beginning to take a toll on my mental health. On top of that, I was once again just wasting the days away scrolling through a vast wasteland of this negativity. I made the decision for the second time this year to rid myself of my social media habit once and for all. For more information about this, refer to the link from earlier this year as it still describes the reasons and thoughts on my decision perfectly.

When you think about it, letting go is a normal thing to do and encompasses more things than just your past. I let go of all these things this year and gained a greater sense of peace and happiness. Holding on is the opposite of letting go and holding on to things can be detrimental and unhealthy. Holding on to all these things just made me miserable and depressed at the maximum, and quit contributing anything positive to my life at the minimum. Letting go of them, then, has had a huge impact on my life. Letting go means moving forward and I'm more than ready to move forward.

I'll be back this weekend with another vacation post. Wait, there are more vacation posts? Why yes, yes there are! I really wanted to share this post first before continuing on with those, but they are coming. So, come back here this weekend when I talk about Grand Portage and Canada. Yep, that Canada. Until then, have a great rest of your week.