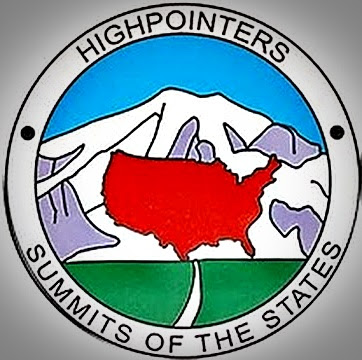 When my Dad and I signed in to the Black Elk Wilderness, he made an off-hand comment about the "Highpointers". Without much thought, nor having heard the entirety of what he said, I responded, "Oh yeah?" "They're people who climb the high points in every state," he replied.

Fast forward a few weeks when the euphoria of having climbed Black Elk Peak, the highest point in South Dakota, had died down, and I got to thinking about what Dad had said. I wondered how many other high points I had already been to. I remembered being on Signal Hill, the high point on Mt Magazine, located in the Ozarks of Arkansas. I remembered Pike's Peak - which, it turns out, is NOT the high point of Colorado. I wasn't in good shape back then and only made it to 9000 feet by car. This means, then, I have hiked two states' high points: South Dakota and Arkansas.

Thinking of high points in every state got the wheels turning in my mind about how I should go to more of them. Since my dad lives an hour's drive from Iowa's high point, Hawkeye Point, I sent him an email about going. He liked the idea. I also mentioned that I wanted to take the kids to my own state's high point the next weekend (Panorama Point in southwestern Nebraska) and he shot back with, "Maybe we can take a long weekend down there sometime in October." Obviously, he doesn't want to be left out of my new goal and is onboard for highpointing with me.

So, today I'm traveling up to my Dad's with my youngest to make my way to my third highpoint. Three down, forty-five to go. Yes, I realize that is 48, but the majority of highpointers do the lower-48. I'll never do McKinley in Alaska, as that's the kind of hike that is for die-hards only, and I'm not sure if I'll ever make it to Hawaii, but I'll try my damndest to do the rest. Wish me luck!