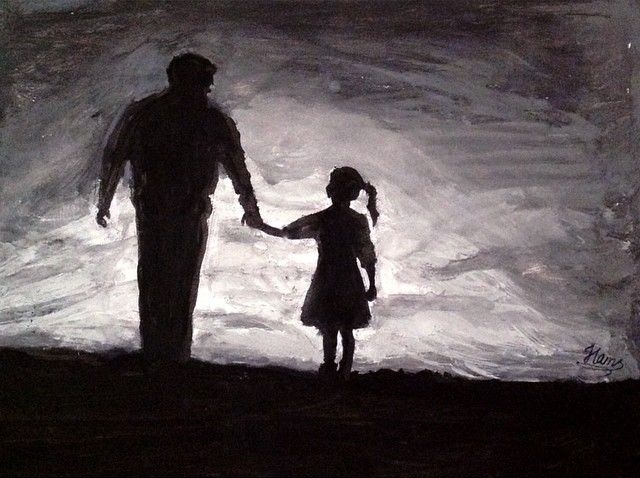 “It’s not more time you need. It’s more quality use of the time you already have.” ― Alan Cohen

My parents got divorced when I was four and by age five I was in the full custody of my dad. My dad didn't get remarried until two weeks after I graduated high school, so we spent thirteen years living alone together. To say we were close would be an understatement. Not that we never fought, because let me tell you, we most definitely did, but we had an unbreakable bond.

Time, inevitably, changes everything, and such was the case between my dad and myself. I grew up and moved out on my own. Close at first, I gradually moved a little farther away each time, corresponding to my comfortableness at living on my own and learning how to navigate life as an adult. At this time, my dad was remarried and raising two step-daughters, both younger than me, so they became their own nuclear family. Due to distance, work, and other commitments, getting together didn't happen as frequently, and when it did, it was usually in the company of other people. While we were still close in some ways, the distance between my dad and myself became more palpable over time.

Eventually, I settled in about three hours away from my hometown, where I started a family; getting married and having children of my own. This only heightened the distance between us. We still spent a good four or five times a year visiting, but with others always around, we never spent the quality time together that we used to. Oh sure, we'd have long talks on the phone from time to time, but it's not the same.

All this changed last year, the summer of 2018 when I spent part of my vacation with my dad. My family and I drove up to my dad and stepmom's place where we spent a good five days. One day, my dad and I (both the avid hikers) wanted to do some hiking locally, but no one else wanted to go. So, my dad and I went alone. We talked like we hadn't talked in years, and it was wonderful. We kept going on hikes, day after day, that no one else wanted to go on, and Dad and I talked about everything. We discussed things we hadn't shared with each other or anyone else. We had deep, personal conversations in the kind of privacy we hadn't known since I was a child. We got to know each other all over again.

And just like that, we once again had an unbreakable bond. We decided on that trip, during those private conversations amongst the hills of Iowa, that we would go to South Dakota the following year and tackle Black Elk Peak. Fast forward a year, and that's exactly what we did. First, we did a three-hour hike of Bear Butte and then a six-hour hike of Black Elk Peak. While we did it with my children, they are faster than us so went off on their own leaving Dad and I hike together as a team while they did the same. This meant, that over the course of two days, my dad and I got nine solid hours of private, one-on-one time. This further cemented and strengthened our re-forged bond and made the hikes all the more meaningful.

We've actually spent quite a bit of time together this year, Dad and I, and we've hiked or walked a few times since South Dakota. We took a weekend trip to Hawkeye Point/Okoboji (post forthcoming), and he came down the following weekend to help me move my son back to college. He spent an extra day and we took a long city walk as well as a forest hike, both times with only each other.

I relish the time, now, that I get to spend with Dad, hiking or walking. It's made me realize just how important he is to me, how fortunate I am to have him, and how much I love him. Our bond is stronger than ever now, and I'm grateful.

Often, it's not the amount of time you spend with someone that counts, but rather the quality of the time that you do spend together. You only have so much time in your life bank, so use it wisely. No matter who you miss and love, carve out some quality time to spend with them. You won't regret it.