The Meaning of Roots 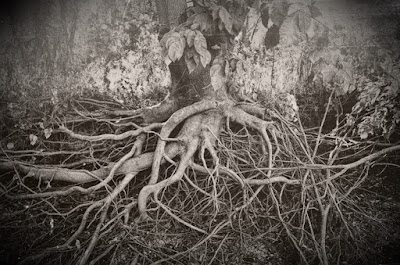 If you look in any dictionary, you'll see numerous definitions for the word "roots". These definitions all fall under two categories: those that have to do with plants, and those that have to do with place. While this post is centered around roots of place, the meaning of that is deeply entwined with that of the roots of plants. In fact, there are numerous quotes and references to just that.

How many times have you heard the expressions, "We're going back to our roots," or "The root of all evil"?

Some famous quotes about roots are as follows:

"The roots of all goodness lie in the soil of appreciation for goodness." -Dalai Lama

"A people without the knowledge of their past history, origin and culture is like a tree without roots." -Marcus Garvey

When I think about roots, I think about where I grew up and where I live now. While I live a good three hours from where I grew up, I still live in the same geographical area: the Midwest. It's always been my home, and I feel deeply rooted here. But just how rooted do I feel? I feel another home calling me from across the sea.

Ever since I was a kid, I've dreamt of faraway, exotic locations, as well as ones closer to home, and how much I'd love to visit them. This is nothing new as I've talked about it quite a bit here on my blog. Indeed, I've shared with you my adventures in traveling, whether it was to a foreign country or a domestic location. I have a deep wanderlust that consumes a large chunk of my thoughts.

Over the last couple of years, because of this wanderlust, I had begun planning for the ultimate in travel: the year-long backpack tour of the world. I had decided that I would save my money, and that, after my last child had grown up and moved out, I would take a year off and see as much of the world as I could.

Honestly, this is more than wanderlust, it's a burning desire that has a heartbeat of it's own and occupies a space in my head. I can feel it call to me like a wolf howling through the forest. It's so palpable that I can almost touch it with my fingers. It's real, and I've thought about it a lot.

Recently, I began to think, "What if, I take the money that I save for this year-long journey around the world, and, instead, use it to move to another country?" It was the proverbial light bulb going off in my head, and I've thought about it often since then. Yes, why don't I move to another country someday? My only argument against it, at the time, was--yes, you guessed it--roots.

I said to myself (yes, I talk to myself), "But, this is your home! Your roots are here." Well, yes and no. I was born in Alaska, grew up in Iowa, and have lived in a multitude of places (different towns, cities, and states), before landing in Nebraska, where I've been for nearly fourteen years of my life. I feel more at home here than I have anywhere else in my life, yet I feel ready to expand, to spread out my wings.

I love my adopted home but I've outgrown it in many ways. It seemed so huge when I first moved here, but fourteen years later, and I know (just like the locals know) that it really isn't. I've done all I can do here, and I've found every nature place there is to hike and explore. And I've done them all several times. Deep in my heart, I need a place with more variety, more to explore, and easier access to the rest of the world, or at least a larger chunk of it.

So, yes. When my youngest is ready to leave the nest, I will be too. Where will I go? I have a couple of ideas, but I have some time to figure that out. I know, I know. Maybe my roots will prove too strong, and I won't be able to uproot myself. No, just like a hearty plant, my roots can be pulled from the ground, and replanted somewhere else. And with some TLC, do just fine. I'll be ready. I am ready.