The Magic of Mackinac Island 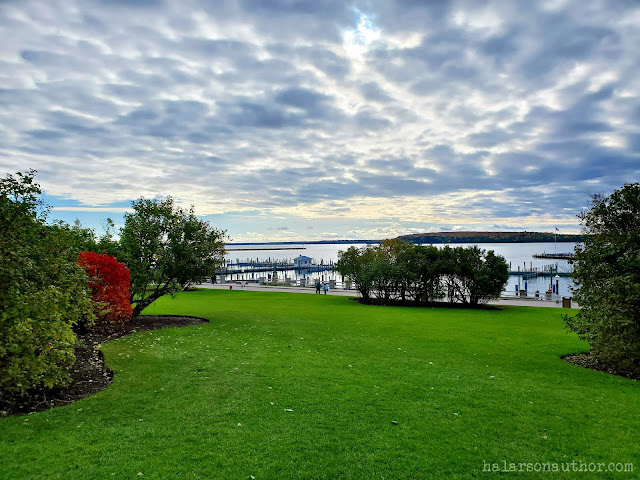 Last month, I took a wonderful, long weekend trip to the Grand Hotel on Mackinac Island, Michigan, with my best friend. The Grand Hotel is a piece of luxury from days gone by, but the little island it sits on is a pretty nifty place as well.
Also, I'm sorry - not sorry that this is basically another photo essay. I mean, when you have such wonderful photos of a wonderful place, it's hard to just pick a few, right? Let's start with our trip to the island. 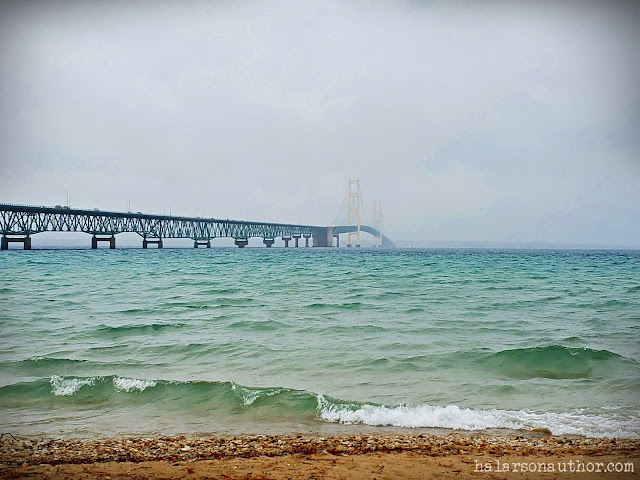 This is the Mackinac Bridge, a long structure that connects the Lower and Upper Peninsulas of Michigan. We stopped on the Lower side that Friday as there's a state park right on the shores of Lake Huron. 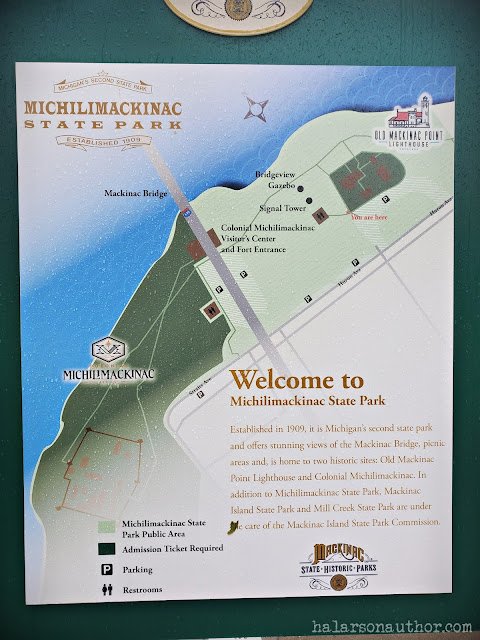 Michilimackinac is that state park and the name is a French rendering of the Anishinaabe Indian word "Mitchimakinak" which means Big Turtle. Incidentally, this is also how Mackinac Island got its name. The island is also considered the home of the tribe's Great Spirit, Gitche Manitou. Coincidentally, I visited a wildlife area in Iowa by the same name a few years back.

The buildings that make up the state park. 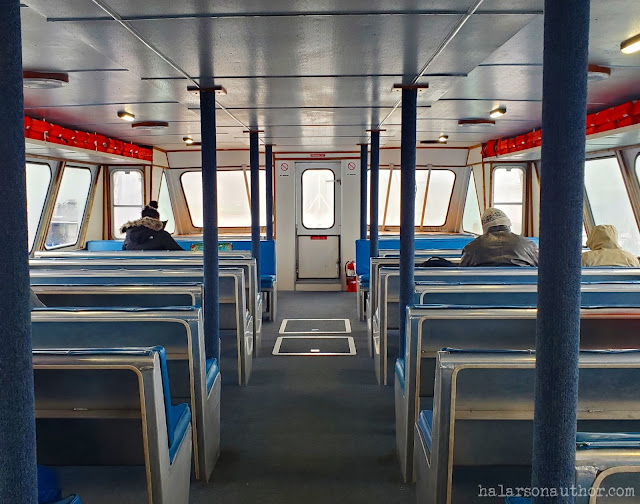 After we left the park and crossed the bridge into the Upper Peninsula, we had to get on a ferry to take us to the island. From the docks, it was less than a half-mile walk to the Grand Hotel. 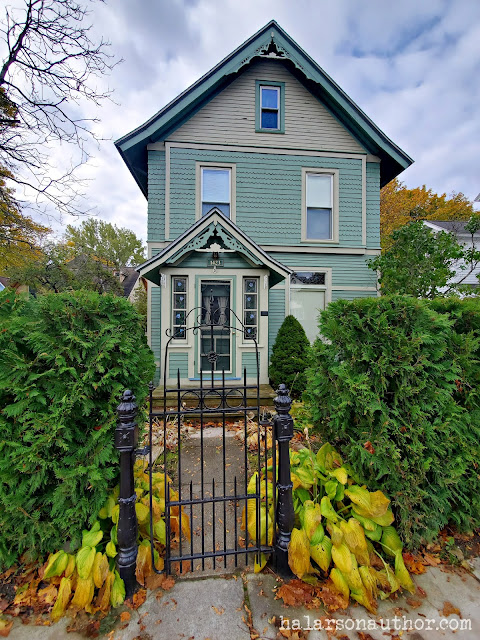 On Saturday, we had a large portion of the day free, so we headed down to check out the island that's only 4.35 square miles in size! We saw so many neat houses and buildings that are steeped in a history that's nearly as old as the island itself. 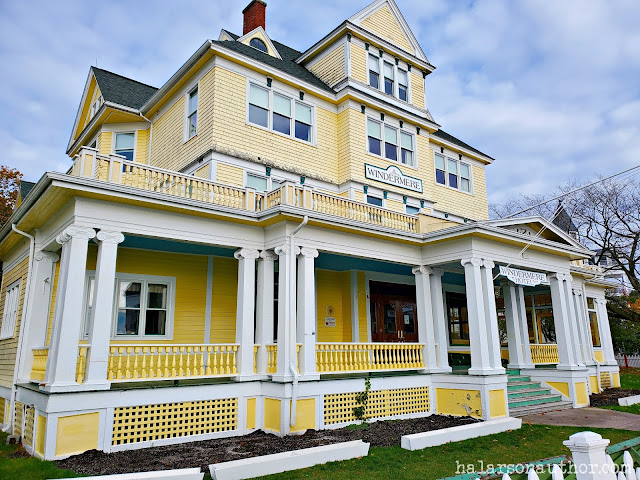 Mackinac Island relies on tourism to keep its economy running, so it's no wonder that the Grand Hotel isn't the only form of lodging on the island. 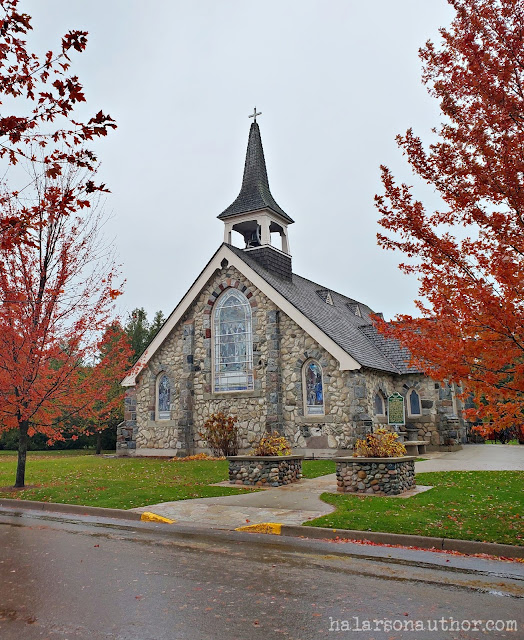 The Little Stone Church lies within sight of the Grand Hotel. Built back in 1904, it's a popular wedding destination. 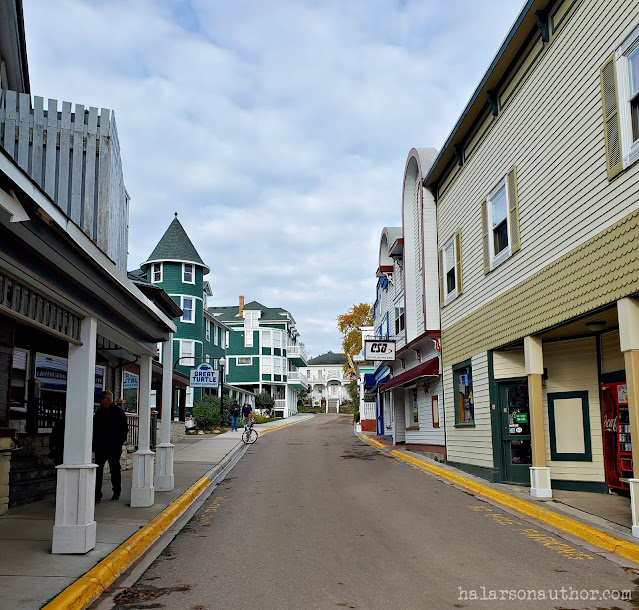 A quaint little side street in the downtown area of the island. 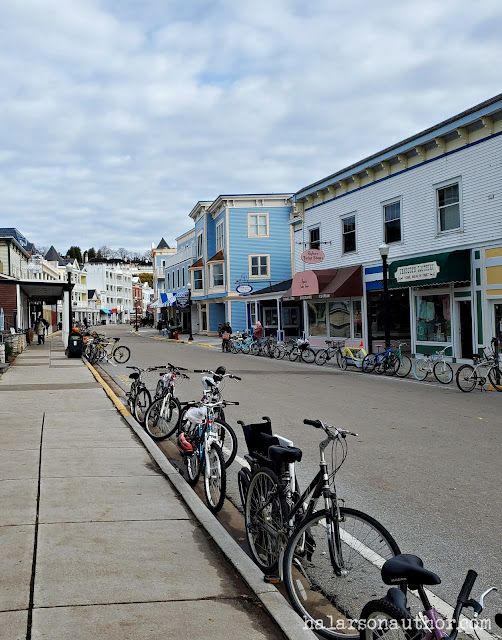 As you can see, there are a lot of bikes. This is because cars are not allowed on the island. People get around either by bike or horse & carriage. 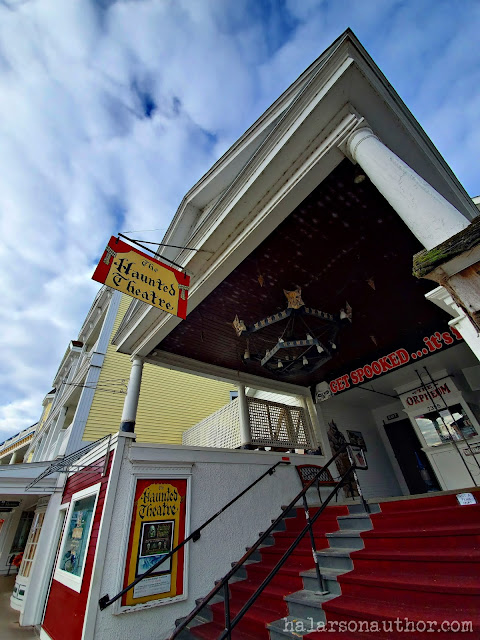 The Haunted Theatre wasn't open as it was near the end of the tourist season, but I would have loved to check it out.

Way back before the Revolutionary War, the British built Fort Mackinac on the island to gain and keep control of the fur trade. Below the fort, is Marquette Park with its prominent namesake statue of Father Jacques Marquette. Marquette was a French-Canadian Jesuit missionary and explorer who founded the first European settlement in Michigan, Sault Ste. Marie. 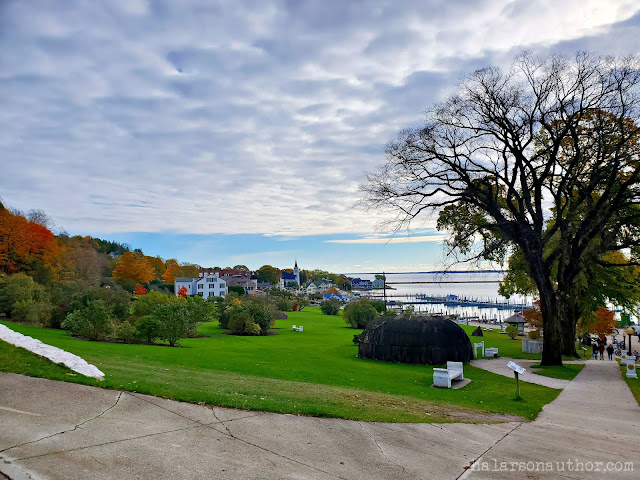 As I walked up the hill to the Fort, I was afforded a gorgeous view of a residential area of the island and their docks.

A view from the top of the island, next to the fort, gives one a glimpse of Lake Huron. You can just make out the two lighthouses in the background. 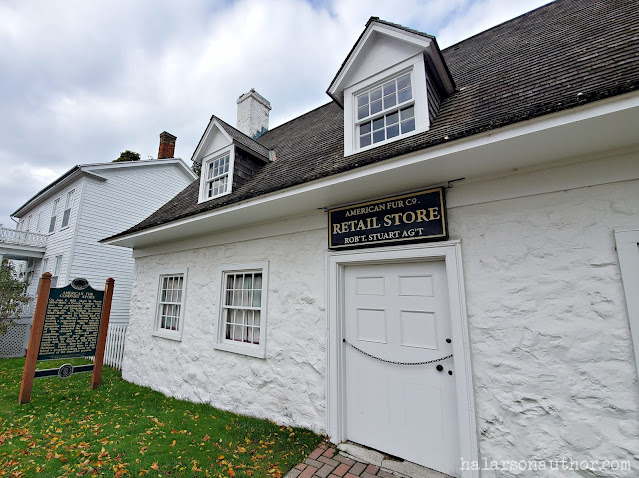 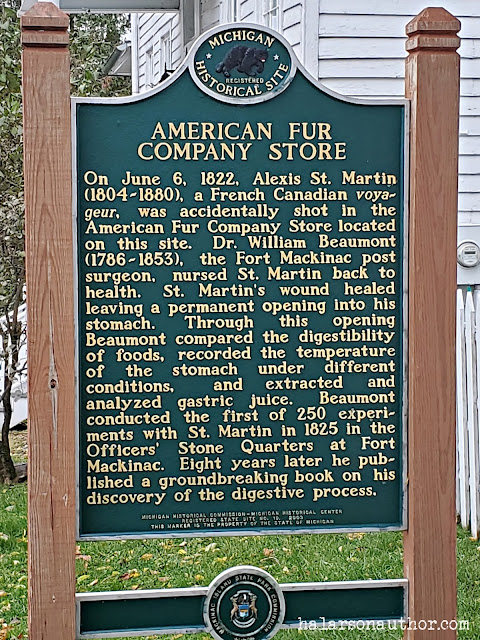 How interesting is that? 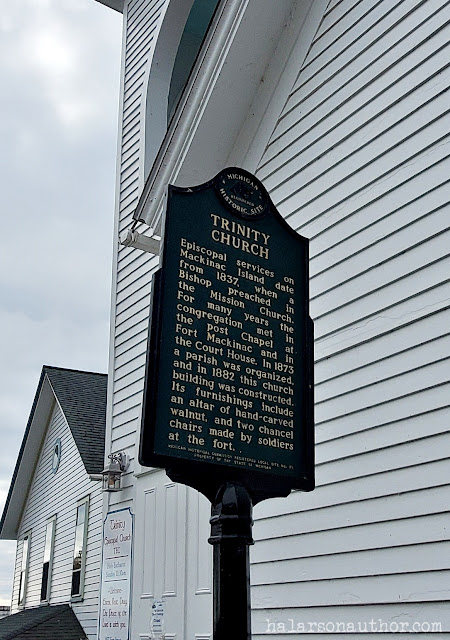 There are no shortages of churches on this little island, and I believe this one is the oldest. It was closed when we were there - again, it was the second to last weekend of the tourist season before the island shuts down to all but it's few permanent residents - but photos I found online of the inside are impressive. 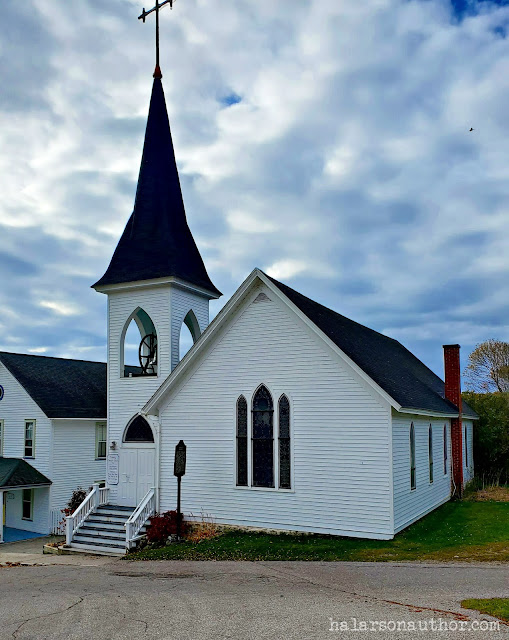 An outside view of the church. 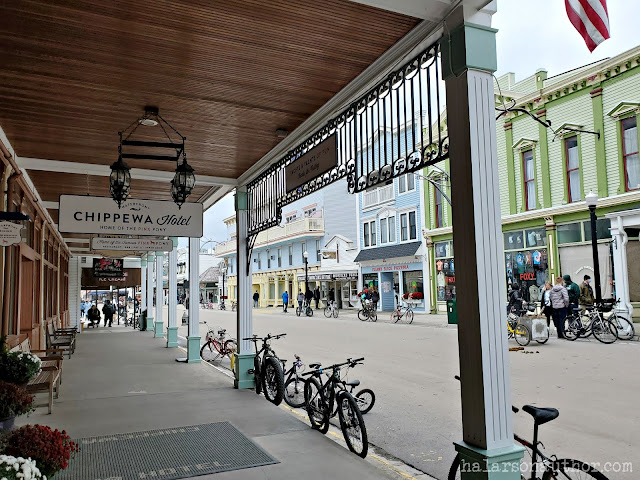 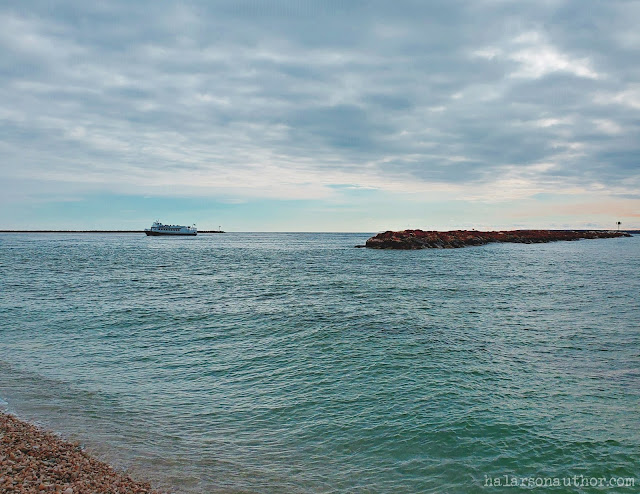 A view of Lake Huron from the shore shows an incoming ferry - exactly like the one we rode into the island. 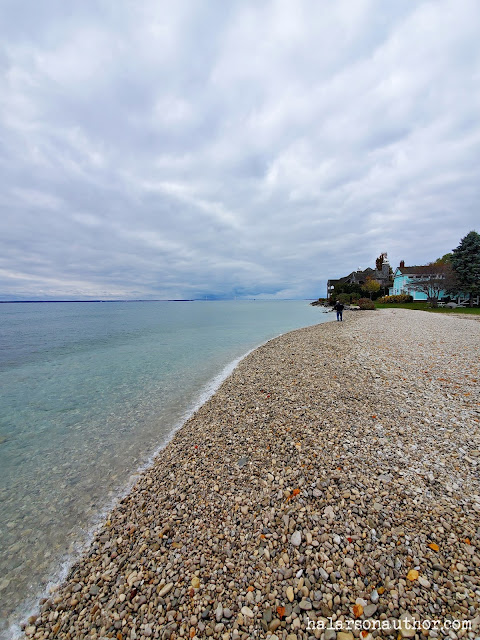 This year, I've been to three of the Great Lakes: Superior, Michigan, and Huron, and they all have a rocky/pebble-type shore, although we did see some sand here and there.
Seeing all the things there are to actually see and do on the island, I wish we could have come during the summer months and on a weekend where we weren't attending an event. We could have experienced all the island has to offer that way, but, regardless, I wouldn't have changed our weekend one bit. We still got to see some of the magic of the island. There's still so much of the world to see, but maybe I'll make it back one day.
Labels: Adventures in Travel Photography The Great Outdoors