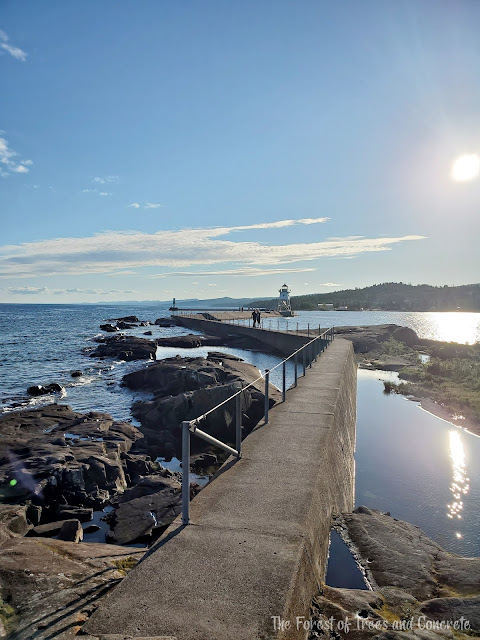 Every day that we were on vacation in Minnesota, we took a short walk down to the Lake Superior shoreline. We stayed in an old Northwoods motel in Grand Marais that was one block from the coast, so it was an easy and beautiful way to end each day. One of the features of Grand Marais is a small lighthouse. While pretty to look at in gorgeously framed photos, lighthouses serve an important purpose - to prevent boats from crashing into the shore when it's dark and/or stormy.


As you can see from this picture, there is another, smaller, lighthouse but we only went to the main, easily accessible one. A narrow concrete pier allows you to walk to the lighthouse. 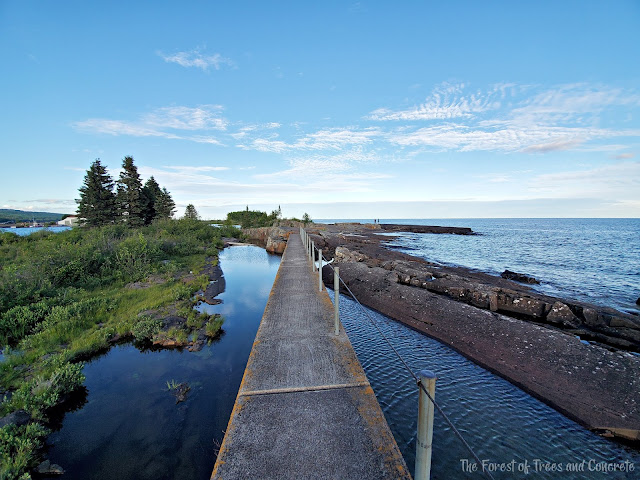 A look back the opposite direction on the pier.


Before you hop onto the pier, you can instead walk amongst the rocks and boulders on the other side of the pier. This rocky coastline seems to be a hallmark of the shores here in Northern Minnesota.


I was repeatedly struck with the notion that it felt like we were on the shore of an ocean rather than a lake. It looked, sounded, and smelled liked the ocean, and with the massive size of Lake Superior, it's easy to feel this.

Whenever we had a chance to get right down to the Superior coastline, we skipped rocks. Off to the right, you can see the pine trees that remind me that we're in Minnesota and not Massachusetts. While I've been to Northern Minnesota many times, I had never been to any of the Great Lakes. To say it was a magical place is an understatement because it truly felt magical. No pictures can quite do the place justice, but they are lovely anyway. I hope you enjoyed them.

It was nice to take some time away from the hustle and bustle of life, especially during the pandemic. It's hard to believe that it was nearly two months ago now that we went on vacation. It was also the second joint vacation I took with my dad and that was special within itself. My folks aren't getting any younger, and neither am I. Time is fleeting so you have to make the most of it and spend time with the people you care about before it's too late.

Have a great week and I'll be back with another post this weekend. My monthly newsletter will go out before Friday, so sign up for that now if you haven't already!