An Overdue Trip to the Lone Star State

Growing up, I was a product of divorce, my parents splitting up when I was four years old. I lived with my Dad in small-town Iowa where I had a typical, stable, happy life. My Mom moved around until she landed in Texas around forty years ago and has remained ever since. Her job did take her to Arkansas for a few years, but she kept her home in Texas and returned there when her stint in Arkansas was over.

While I did visit her a few times in Arkansas, I hadn't been to see her at her home in Texas since 2013 so I figured it was high time I go home to Texas for a visit. Since I have a nice long break from work every holiday season, I planned a five-day solo visit before the new year. 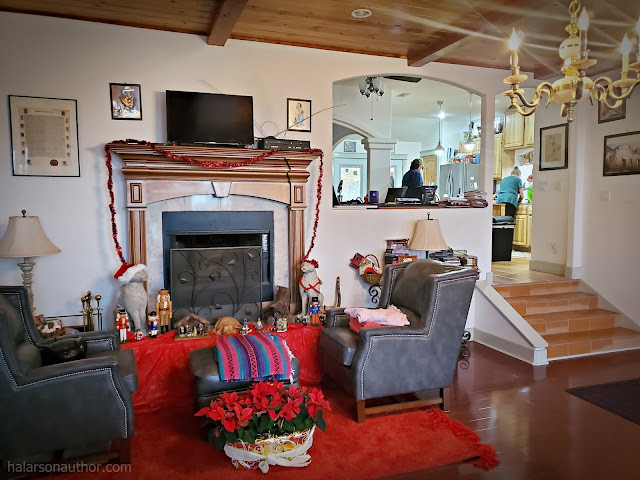 I arrived at the Austin airport on Thursday before noon. After a quick stop at the liquor store for Reunite and Irish Cream, we headed to Bastrop where my mom lives. 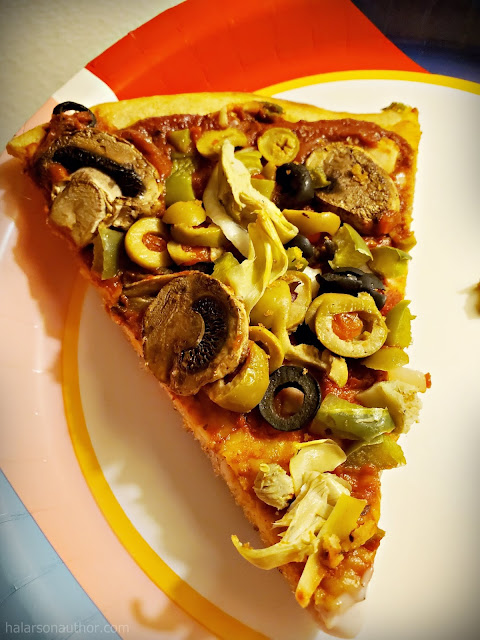 No trip to Mom's house would be complete without her homemade pizza. She makes the BEST crust and sauce. She made two crusts so I could make a veggie with no cheese. Just look at that beauty! It was so delicious. After supper, I walked next door where my grandma and my uncle live. While I had seen my mom and my grandma this summer in Missouri, I hadn't seen my uncle in twenty years, so it was nice to catch up. 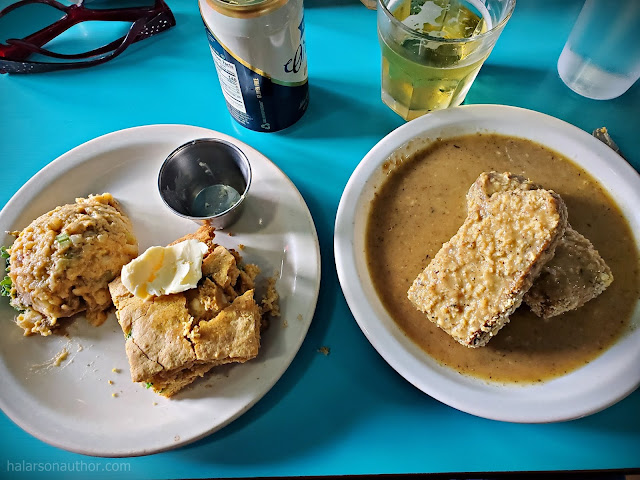 The next day Mom had to work. Originally I was going to make the trip into Austin with her and just do some solo sightseeing while she worked, but since my uncle is retired, he offered to take me into Austin. He went to the gym while I did a bit of shopping, and then we went out for lunch. We made the drive over to Counter Culture where I had the Southern Baked Seitan with Classic Potato Salad and Jalapeno Cornbread. 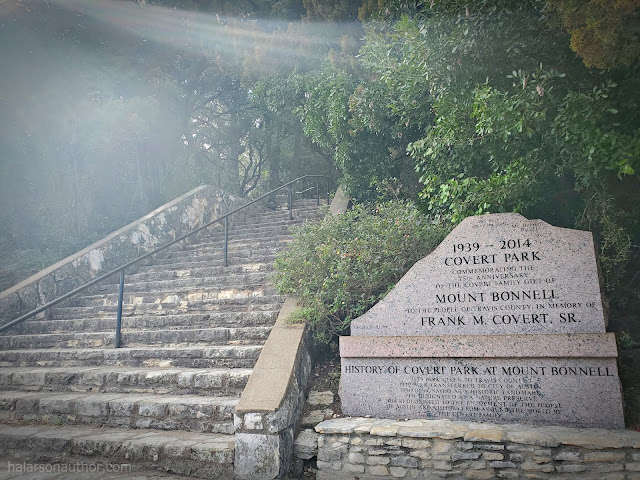 After lunch we drove over to Mount Bonnell, one of two stops I wanted to make. 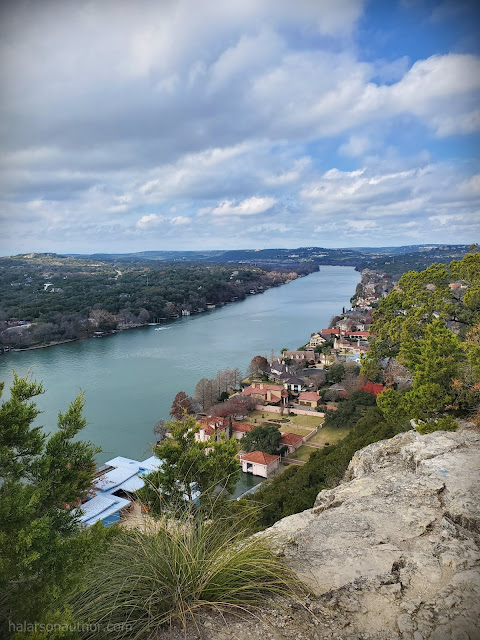 I walked the long flight of stone stairs to see this view of Austin and the Colorado River. 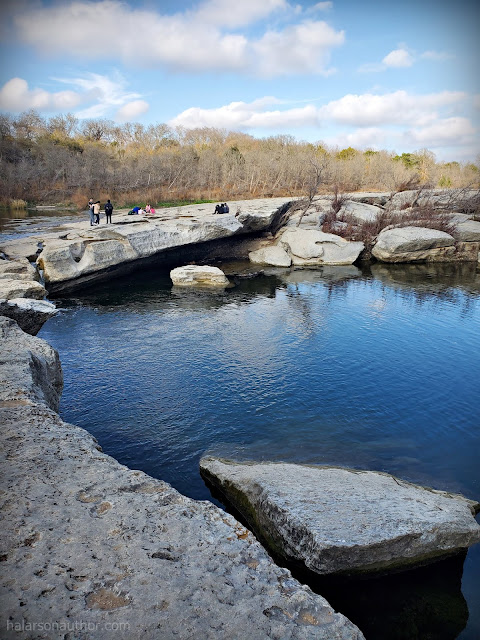 After that, we drove over to McKinney Falls State Park. It wasn't the most exciting park I've ever been to, but it was something to do.

Mom and I were both tired that night and fell asleep early. The next day we took a long walk around the neighborhood, went to a family gathering with Mom's boyfriend's family, and did some karaoke at a Texas VFW where everyone can still smoke. I hadn't been in a bar you can smoke in for years and it kinda sucked. 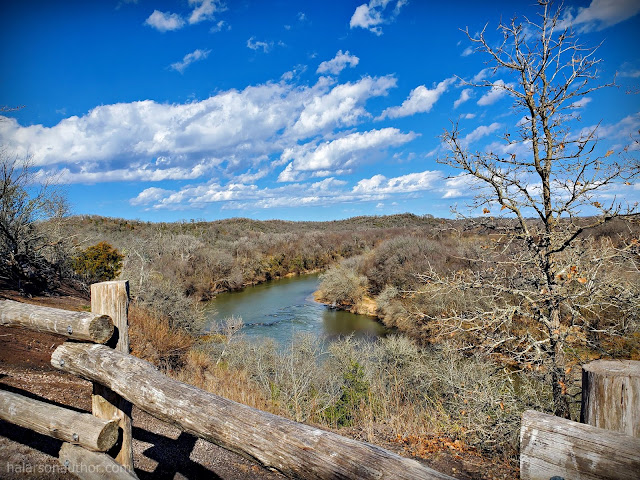 The next day, we slept in then headed over to McKinney Roughs Nature Park, a small park outside of Bastrop. They had some really nice trails with great scenery. When we reached the top of this hill, we were treated to this view! Another gorgeous view of the Colorado River. 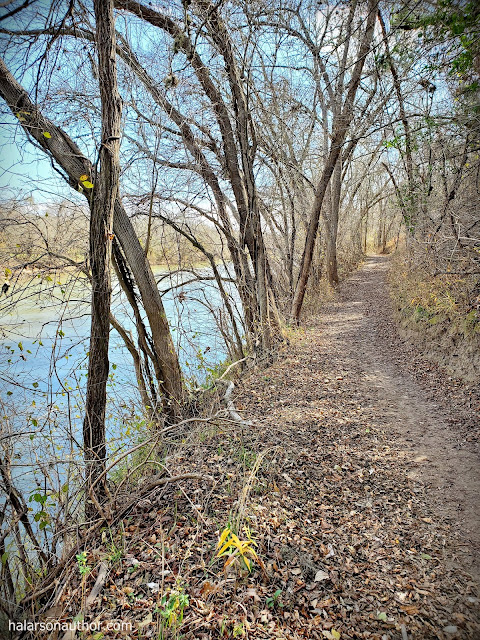 The walk in the valley next to the river was an Autumn dream. 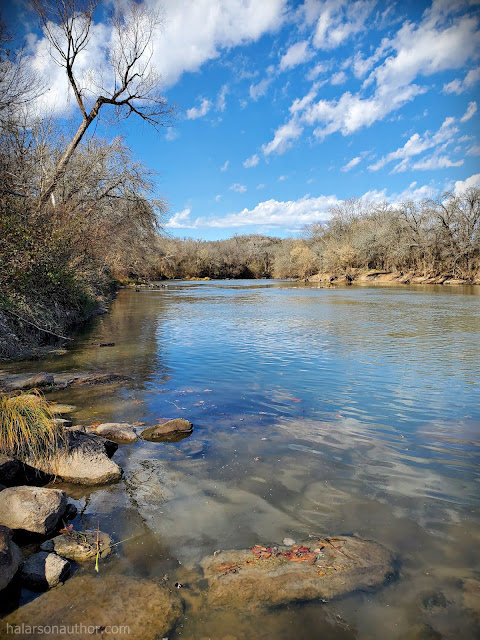 Standing on large rocks in the Colorado River.

The next day Mom worked from home while I spent time with Grandma. I took her to her doctor's appointment, out to eat lunch, and then to pick up her medicine before heading back home. I visited with my mom after her workday was done before we both headed to bed early since we had to get up at one in the morning to get me to the airport in time to catch my 5 a.m. flight.

This was the first time since before I became a mom myself that I haven't been to visit my mom without at least one of my children. I enjoyed getting to spend some alone time with my mom, something I appreciate after getting to do the same with my dad over the last couple of years. Hopefully, I can get both kids down there this year sometime to visit. Until then, thanks for the memories, Texas.