In the three years I've been eating a plant-based diet, the vegan food scene in Omaha has grown by leaps and bounds. I'm a foodie at heart, and I love good food, but being a vegan in Omaha has proven tough for being a foodie. There's only so many salads and french fries or baked potatoes that I want to eat - not that I hate salads or potatoes, I love them, but sometimes you need food with more body and substance.

Fortunately, the tide has shifted. Not only in Omaha but all over the country, you can find the most talented vegan chefs creating magic and culinary masterpieces. Not that I need a 5-star dining experience each time I go out, but if I can get an impressive casual vegan meal as well, I'm happy and satisfied. When I want more in the way of a 3-course meal, I head over to Modern Love, Omaha's only full-vegan, amazingly delicious, restaurant. But, when I'm looking for easy lunch dates or casual dinners, I head to the Blackstone District.

The Blackstone District is a historical, revitalized neighborhood in Omaha that got its name from The Blackstone Hotel. Built in 1915, it was declared a landmark in 1983 and put on the national historical register in 1985. Today, the area has been gentrified and a host of unique shops and restaurants abound. One of them is The Blackstone Meatball. 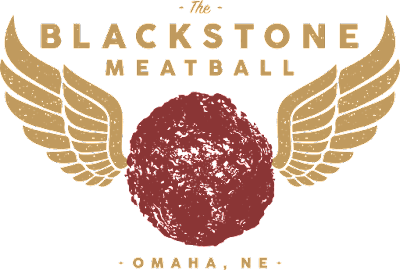 I first came to the Blackstone Meatball by way of one of my closest friends, Rebecca. Rebecca and I don't get to see each other as often as we like, but we do try and make a point of getting together for a nice evening out every couple of months. Our go-to friend date is to grab a bite to eat somewhere nice and follow that up with a few drinks at a bar. Often we would find ourselves in the iconic Old Market, but this time we were looking to go somewhere different. Since neither of us had been to the revitalized Blackstone District - and because their restaurants serve vegan-friendly fare - we decided to give it a try. We settled on The Blackstone Meatball for dinner.

Chic, homey, and decorated like a Millenial's apartment, The Blackstone Meatball serves - you guessed it - meatballs. There are five meatballs to choose from: their standard four and one special. As a vegan, I eat one of their standard four: the White Bean & Mushroom Meatball.

I included this picture of the vegan meatball because mine is always covered in sauce and they can't be seen well. Case in point, the following photo.

Your ordering options for the meatballs are a flight, where you get one of each; sliders or subs; served with pasta; or served with the vegetables of the day. You can also choose from one of their standard sauces as well. I always get mine the same way: White Bean & Mushroom Meatballs served over grilled veggies (it's always been potatoes, Brussel sprouts, broccoli, and carrots), and smothered in Pomodoro sauce - which is simply a basic red sauce made from chopped tomatoes, garlic, olive oil, salt, and a pinch of sugar.

I love this dish so much that I stuck with it when ordering there a second time, besides, veggies are always a healthier and more flavorful option than pasta. The balls themselves are a wonderfully blended mix of white beans and mushrooms, flavored expertly by the chefs, and then fried to a perfect crispy outside with a tender, moist inside. The vegetables are perfectly roasted and seasoned, as is the sauce, which is generously poured over the top of the entire thing, making for a mouth-watering, tasty dish. I usually end up eating all of it because it tastes so good and then feeling sick from all of food rumbling around in my stomach. What I love the most about The Blackstone Meatball is the flavor. They understand that good food should be seasoned well, and they have theirs down to an exact science. All too often I've been disappointed by lack of flavor, but not here!

If you're ever in the mood for meatballs, vegan or otherwise, like good atmosphere, tasty food, and good drink specials, head on down to The Blackstone Meatball. You won't be disappointed!