This thing we call Life 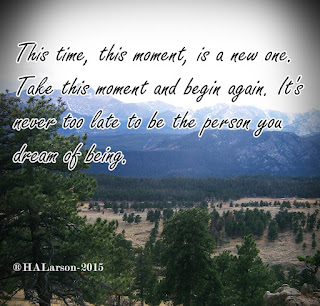 When I was young, I always pictured my adult life to be a certain way. I imagined that I would be either a college professor or a professional musician in an orchestra; living in a big city; taking up residence in a fabulous brick house in a bucolic suburb that was covered every fall in gold, brown, and red leaves; and taking vacations every year to exotic locations. That vision never really varied much, and stayed constant throughout my 20's. When my 30's beckoned, and then became a reality, I realized that I hadn't done much of anything I had imagined myself doing, but still held firmly to this idea that I had plenty of time to accomplish those things.

Then, somewhere around age 35 I became acutely aware of my own mortality, and when the dawn of my 40th birthday was upon me I was overtaken with melancholy. At that moment, I understood the truth about myself: I had wasted away half of my life. I had totally blown all my prime years, and that truth was a devastating blow. How could I have failed myself so much? I looked at what my life was. Far from the fabulous life I had imagined, I was poor (and had been my whole adult life up until that point), had saved nothing, flitted around from one worthless job to the next, lived in a crappy apartment, drove a crappy car, and had never been anywhere except for a couple of trips to see my mom in Texas (that she paid for).

What should have been a milestone in my life--one to look back on the years before with a smile and to look towards the future years of my promising future--became a depressing day filled with misery and tears. What came next were a few crazy years of trying to do everything at once and having just more trying days. After that, I finally figured myself out. I knew who I was, and what I wanted. More importantly, I started making the necessary changes in my life that I needed in order to move forward in all aspects of my life.

Time isn't permanent for us, and we've only got a limited amount of it. Once I understood that, I was finally able to start doing what I needed to do in order to take charge and start living my dreams. I needed an attitude adjustment first and foremost. I needed to kick bad habits to the curb and begin adopting good ones. I needed to take responsibility for my shortcomings and make peace with it. Lastly, I needed a plan.

I've now realized a few of my dreams, but I have an actual bucket list that I'm working on. I've also realized that the vision I had of my future self back when I was young is not the vision I have of myself now. Future me doesn't desire the same kind of life that younger me did. So, while I'm traveling a different path than I had imagined all those years ago, it's still pretty great none-the-less.

I've also come to the conclusion that the old adage "It'd never too late to realize your dreams" isn't just a dumb old saying. I might be in the second half of my life, but that's still half of a life to do the things I want, and as long as I take care of myself, I should be able to keep on keepin' on well into my twilight years. Two things I know for certain: 1. I'm not taking my life for granted anymore, and 2. I'm not going to sit back and let the rest of my life just pass me by. Wiser, older me is taking over for naive, not-so-wise, younger me, and we're going full throttle from here on out.

Let's get busy living shall we?