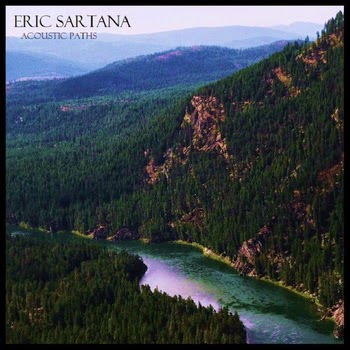 Anyone who knows me well, knows that I am a total music buff.  As I've gotten older, I find myself watching television (and movies) less & less, and listening to music more & more.  To that end, I'm going to try and do short, honest reviews of albums that I have listened to, and hopefully give them a boost as well.

I have an eclectic range of music I like to listen to, but one of my long-standing favorites is metal.  In this capacity, I became acquainted with Eric Sartana, who happens to be the front man for the doom/black metal outfit Throne of Malediction.  Over the last few years, I've acquired an appreciation for melodic music of many types, and this is where this album comes in.

Acoustic Paths is a haunting album of original music with a couple of covers (I Don't Mind the Pain - Danzig, and Desecration Smile - Red Hot Chili Peppers).  The album is melancholy, it's underlying theme is the end of a love between two people, ripped apart by deceit and anger.  One person has to deal with the fallout, which comes across beautifully in the emotive voice of Eric Sartana, and it's not hard to feel what he feels.

Eric's voice is perfectly accentuated by his evocative, yet powerful, acoustic guitar playing.  It's a dynamic combination that needs no other accompaniment.  The poignancy of the love's death is expressed in the moving combination of voice/guitar, and the covers just add to the overall theme from beginning to end.

This album is available on the Throne of Malediction's Bandcamp page, get it here.  I highly recommend it!  While it's free for a listen, try and give the guy some money.  He's earned it.
Labels: Books & Music & Movies