Another Year, Another Passport 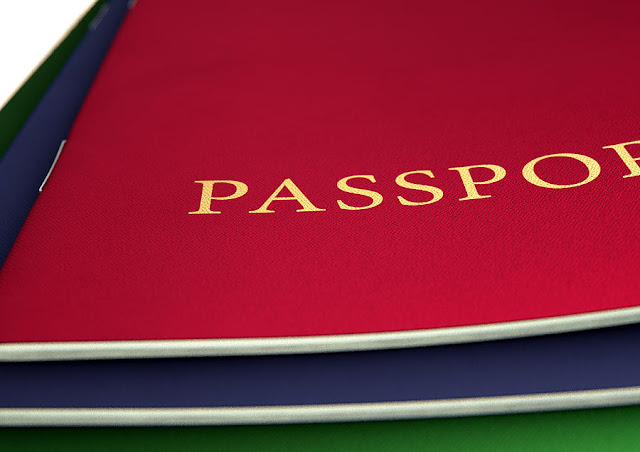 I love nothing better than a good passport. My U.S. Passport has taken me out of the country and I love it for that, but there are so many touristy-type passports you can get for a variety of things within your own state. 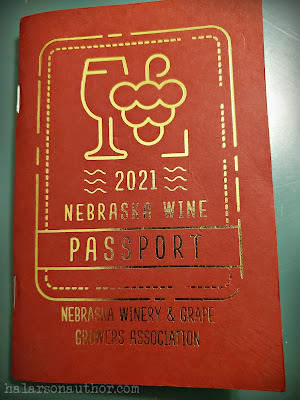 Last year, for instance, I dove head-first into the Nebraska Wine Passport. I made plenty of posts about the adventures I took with friends to discover the wines and new parts of the state that I call home. It was a ton of fun and something exciting to do on an otherwise regular weekend. I managed to make it to 18 out of the 29 wineries and tasting rooms that were a part of the passport program, and I scored a free t-shirt and two really nice bottle corks.
This year, the passports came out a little earlier than usual and I just happened to be at Glacial Till Tasting Room an hour after they arrived. While I've managed to get 5 of the 32 (they've added three new places this year!) winery stamps so far, I just don't have the same gusto for doing the passport this year. There are a few reasons for it but the main one is that since I've already done a year of the passport it's just not as exciting this year. 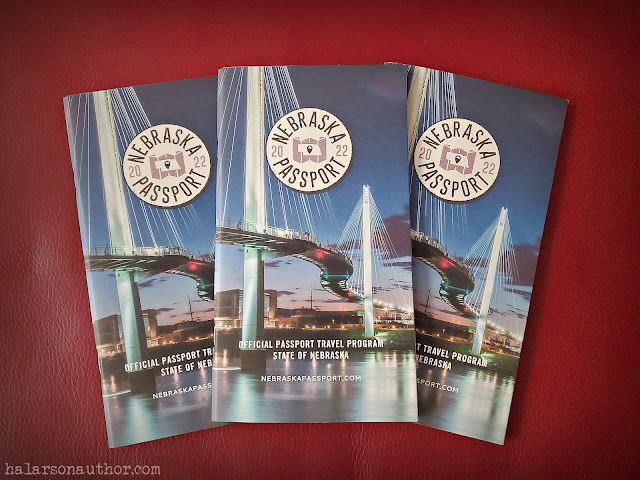 Then, I heard about the Nebraska Passport. Thinking it would be more of a state park, with unique sites, museums, and other fun historical stuff, I ordered a few off the internet and they were shipped right to me. While there are some of the aforementioned in the passport, there are a lot of shops, bars, and stores as well - just about the least interesting things for me to want to visit. Not only that but the passport is really only built for the summer in that you have from May 1 - September 30 to complete all 52 items. With gas prices the way they are, I'm not nearly that ambitious to visit shops.
So, I went back to the Visit Nebraska website to see if they showed any other kinds of passports that visitors and natives could participate in, but there was nothing. On the other hand, our immediate neighbor to the east, Iowa, has a bunch of cool passports listed on their website. Plenty of these caught my eye, but my top contender was the Iowa Scenic Byway Passport. 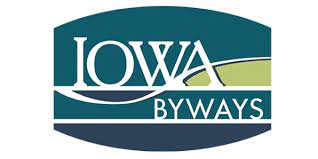 As you all know, I love nothing better than a good day trip. Many of my favorite ones have consisted of discovering unique places and driving along the Iowa Byways that weave around the Loess Hills (or as I like to call them, the Iowa Mountains). So, I downloaded the passport to my phone (no paper one here) and printed off the accompanying pdf guidebook. Since they both have different things listed on them, it's good to have both.
First on my list was the Western Skies Scenic Byway. It winds 142 miles, mainly on Highway 44, starting in Missouri Valley and heading east. It's close to home and isn't super long, making it a nice way to spend a Sunday afternoon - which is what I did. 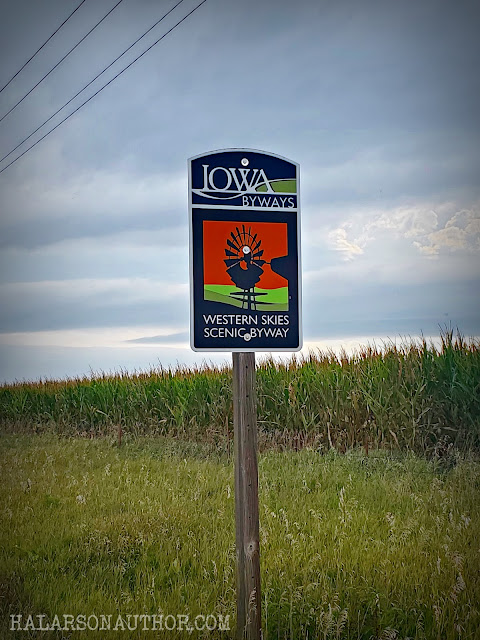 Of course, I had to stop and take a picture of the sign. 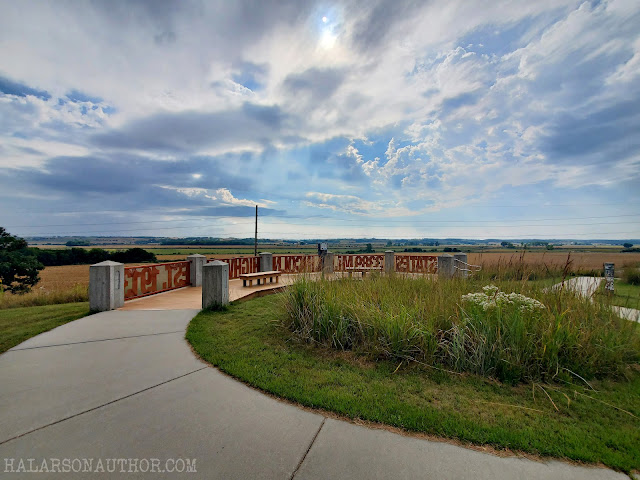 My first official stop is a place I've been to many times before, Harrison County Historical Village & Iowa Welcome Center. It was the main stop on a day trip I took with my ex-husband and daughter more than five years ago. 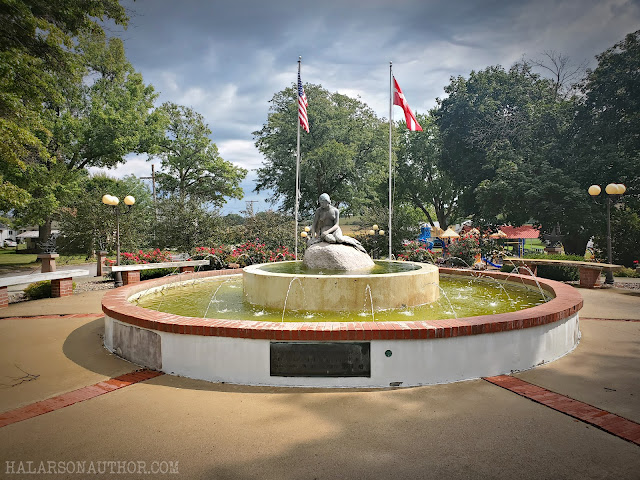 My next stop was the small Danish town of Kimballton. It's known for its city park that's mainly an homage to Danish writer Hans Christian Andersen. He wrote a lot of fairy tales and the fountain you see here is about The Little Mermaid, one of those many tales. 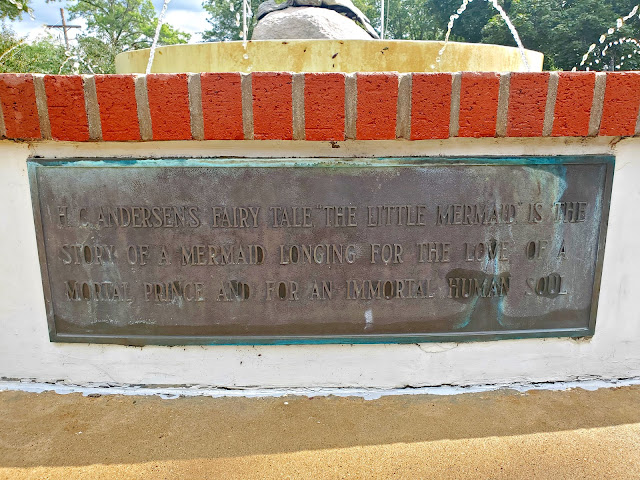 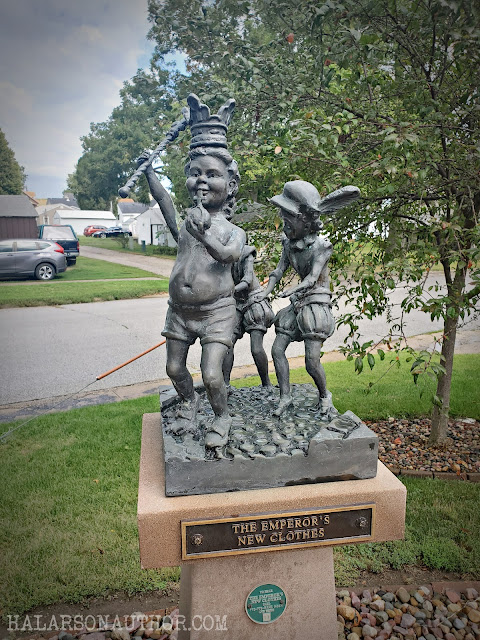 Surrounding the fountain are small statues on pedestals that depict more of the author's fairy tales. 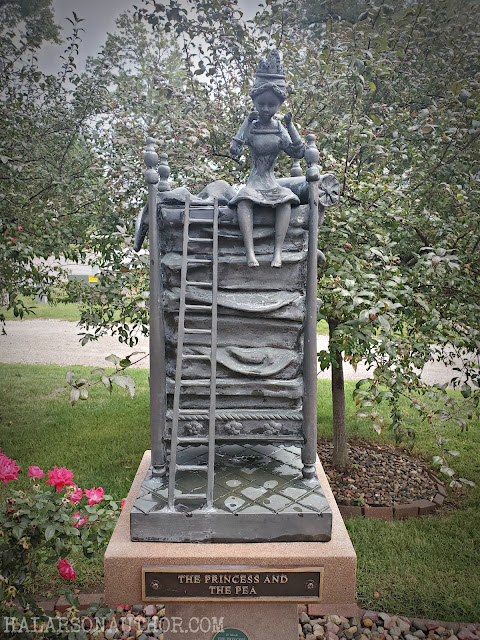 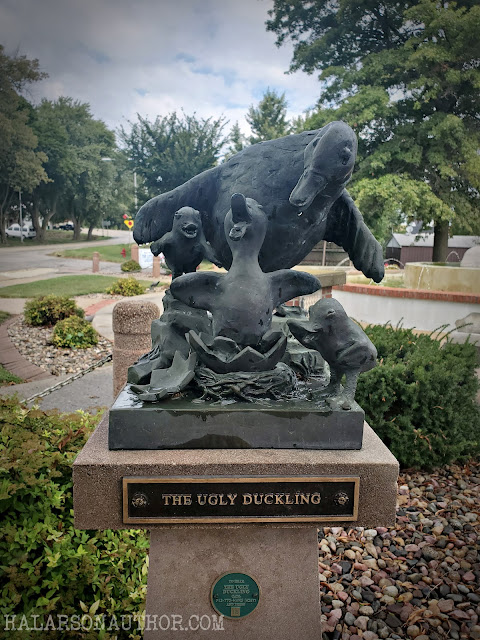 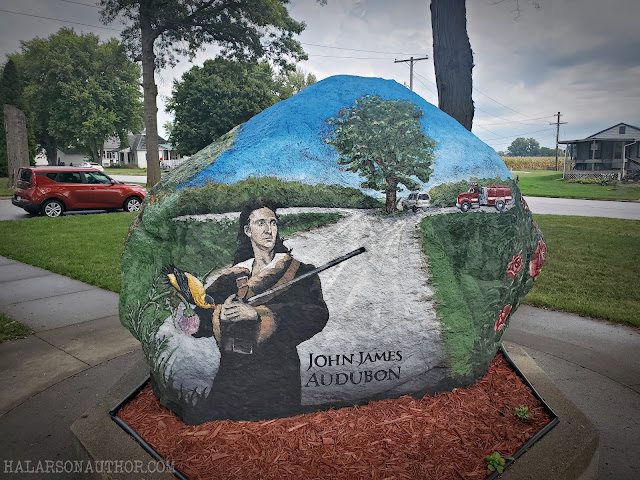 The park is split into two sections. After I admired the fountain and its statues, I headed down the slight hill to eat my picnic lunch at their shelter picnic tables. There's a large rock there dedicated to John James Audubon, founder of the National Audubon Society. The other side of the stone is painted and dedicated to Veterans. 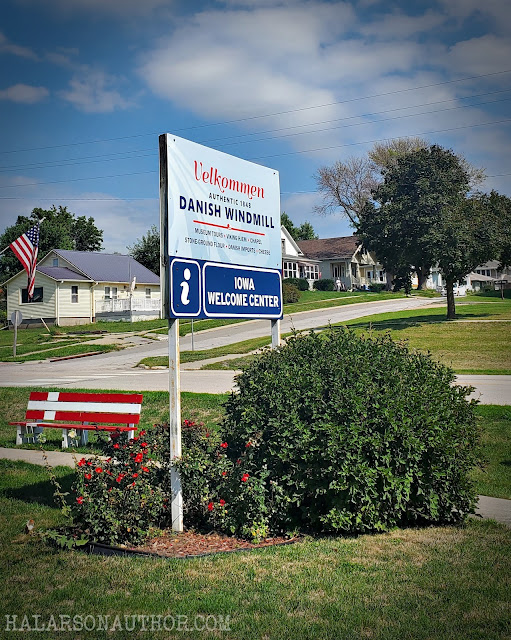 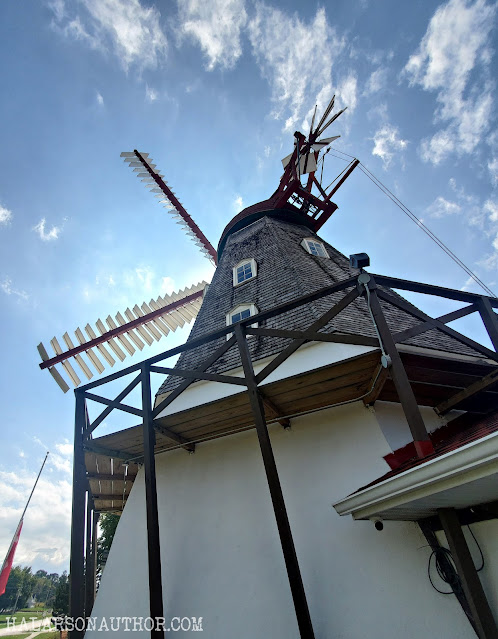 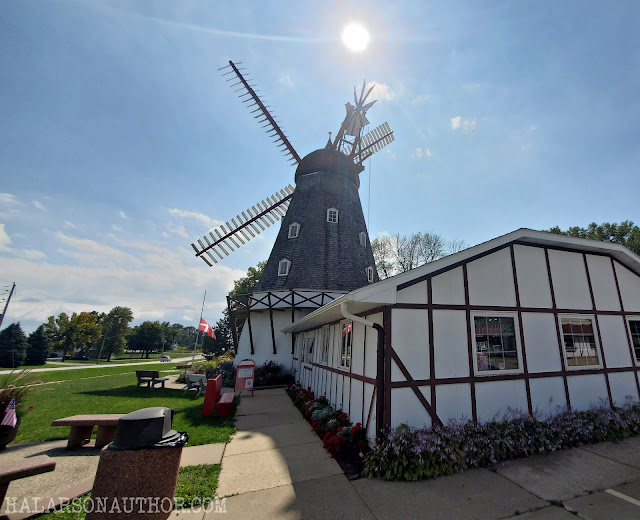 I've been here a few times before as well. It costs money to tour the inside of the actual windmill but you can wander around the gift shop and the small historical village on the grounds for free. 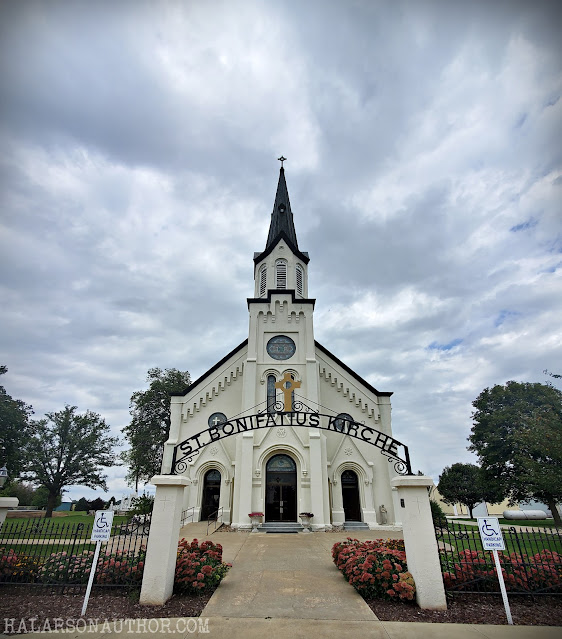 Next, I made my way to Westphalia, home of Saint Boniface Church. If the sign above the entry arch isn't a clue for you, this church (and town) were settled and founded by German immigrants. It just goes to show you how much the Midwest was settled by immigrants. I mean, I went to two Danish towns and then this German town. The church is beautiful and it has an interesting display on its grounds. 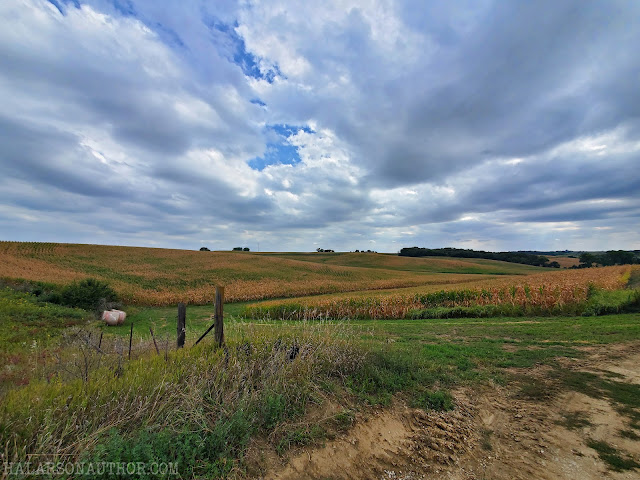 The drive itself was very scenic and beautiful. This was in September so there was just a hint of Autumn in the foliage. 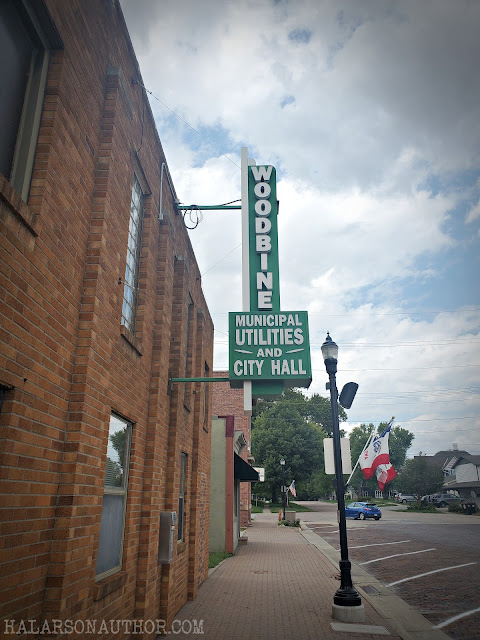 My last stop was in Woodbine. I've heard of this sleepy little Iowa town that's not far from Omaha, but I never had the occasion to go there. 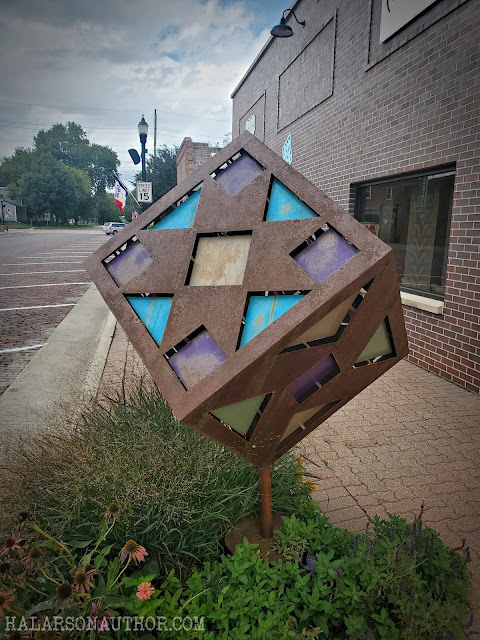 It's known for its public art that lines the quaint streets of its historic downtown. Like in other bucolic small-town downtowns I've been to, music plays from loudspeakers as you walk around. This was a Sunday though and there was not a soul in sight, so it was a bit eerie. 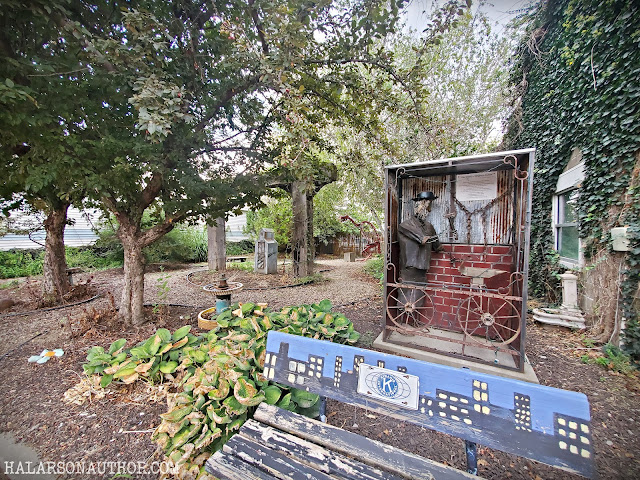 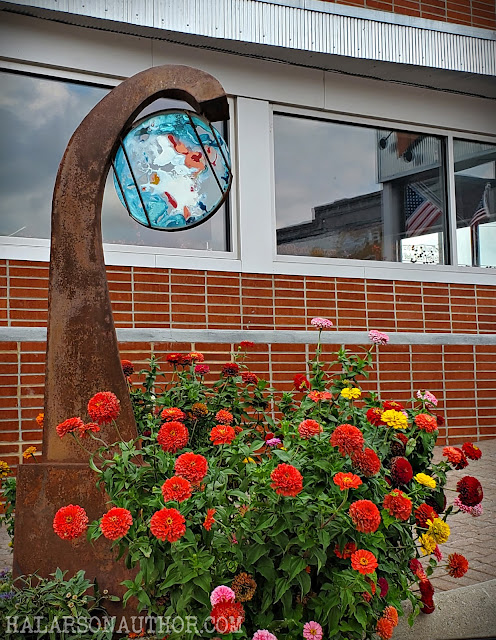 All in all, this was a fun trip. Some takeaways for me are that next time, I need to sit down and plan my route before leaving. I hopped in the car and just took off with the printed pdf and the downloaded passport on my phone. There are many things on the pdf that aren't on the passport and vice versa. I half wandered around aimlessly searching for things that were listed but not able to find. It would have been more advantageous, then, to have everything plotted out and planned before I left.
Also, I didn't go to everything on the passport or the pdf. Since the byway starts relative close to home, I've been to many of the things listed more than a few times. You have to be mindful of the fact, also, that some things will charge an admission price.
I'm definitely just getting started on this passport and since there's no expiration/complete by date, I can do this on my own time and at my own leisure. Next up? Covered Bridges Scenic Byway. That one looks incredibly interesting and I'm meeting up with a friend there for a Saturday adventure and campout.
Have a great week, my friends!
Labels: Adventures in Travel Musings The Great Outdoors