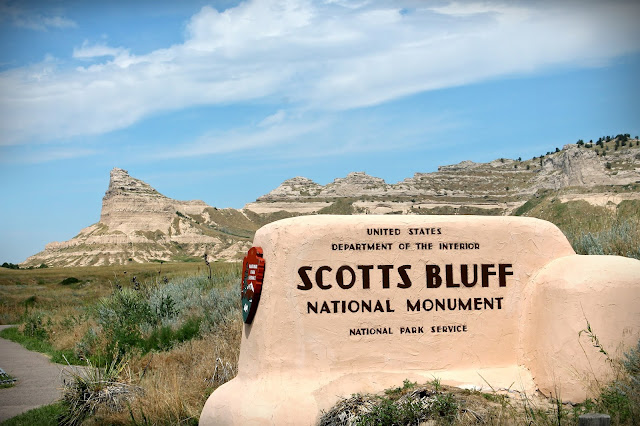 On Labor Day weekend, I took my daughter out to Western Nebraska for what I hoped would be a fun, bonding mother-daughter trip. We packed up the car early on Saturday and headed just shy of seven hours west from our home in Omaha. I was excited. I'd always wanted to spend some time out in Western Nebraska because there are so many interesting things to do out there: Scottsbluff Monument, Toadstool Geologic Park, Chadron State Park, Agate Fossil Beds, Wildcat Hills, and Fort Robinson. I was also hopeful. My son is grown and on his own leaving my daughter the last kid at home, but, she's 15 and lives in her own world and would rather do just about anything other than spend time with me. It's a stark contrast to two years ago when she and I were hiking partners.
While I recognize that she's a teen now, I was hoping we could get one more good, fun trip in together before she grows up and moves out, too. Alas, it just wasn't meant to be. Not only was she dead set against doing anything, but she also came down with a bad cold the night before we left. By the time we made it to the town of Scottsbluff - our anchor town for the trip - she was feeling pretty crappy. We relaxed the rest of the day in the motel while I fed her various otc meds and hoped for the best. The next day, it was clear that she wouldn't be going anywhere, but I was determined to do things anyway...after all, I love doing things alone. So, off to Scottsbluff Monument I went. 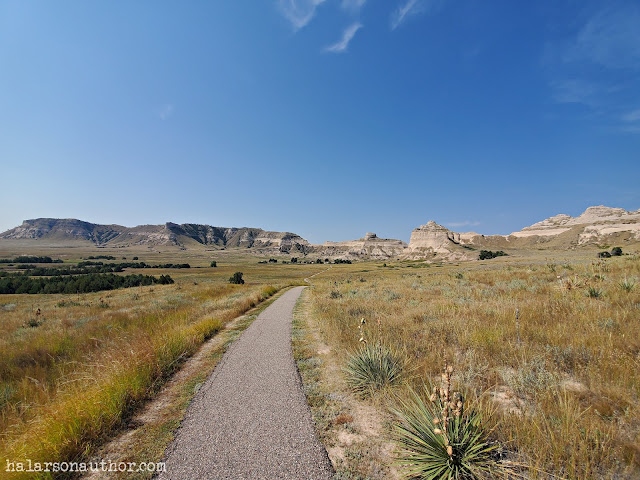 I left fairly early, while the weather was still cool, to take the Saddle Rock Trail. This trail goes from the Visitor's Center to the summit of the Bluff. It's paved but unshaded and there's a steep grade to climb, making this a hard trail. 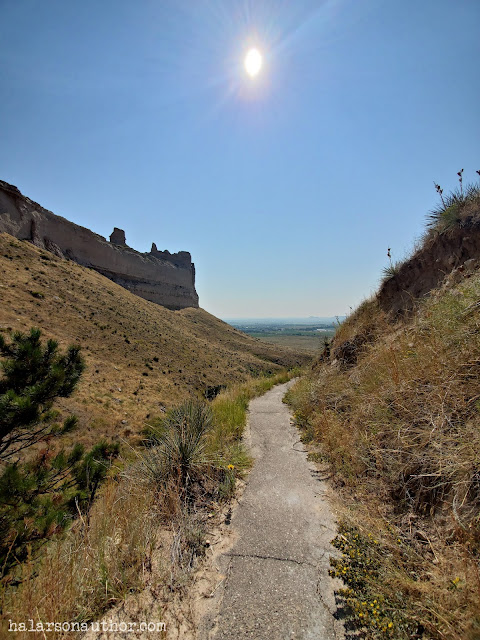 The trail wends its way between and up the South Bluff. The North Bluff is Scottsbluff and was so named for Hiram Scott, a clerk for the Rocky Mountain Fur Company who died near it back in the 1820s. The Bluff served as an important landmark for travelers on the Oregon Trail, the California Trail, and horseback riders on the Pony Express Trail. 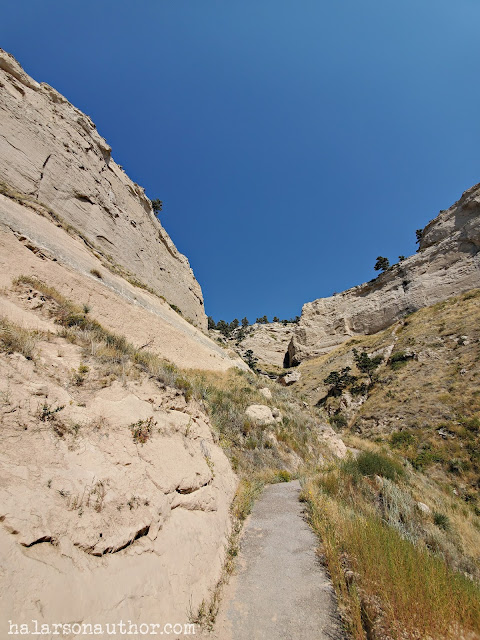 A view in the other direction gives you a glimpse of the grade that you face on the trail as you climb upwards. 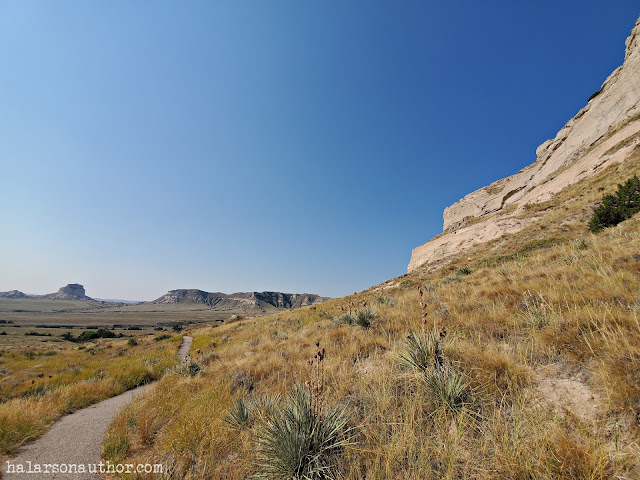 Back in May, when I was moving, I tore the meniscus in my right knee and I've been slowly and carefully building back up my hiking prowess. Because of this, I tend to hike slower than I ever have in my life, and hiking this brutal trail took me quite some time - and a few breaks. 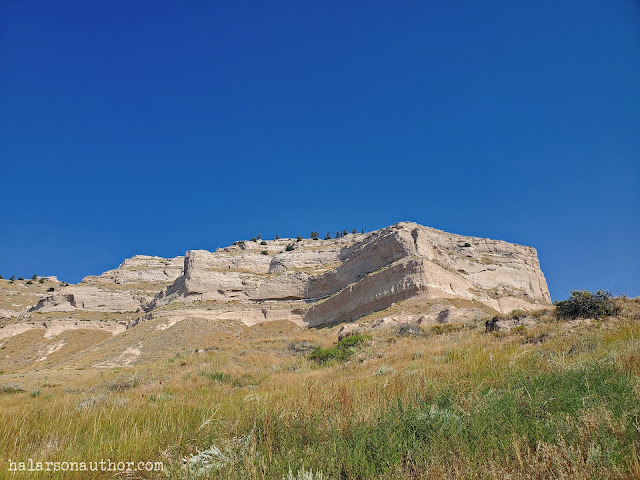 A view of the South Bluff from the bottom. 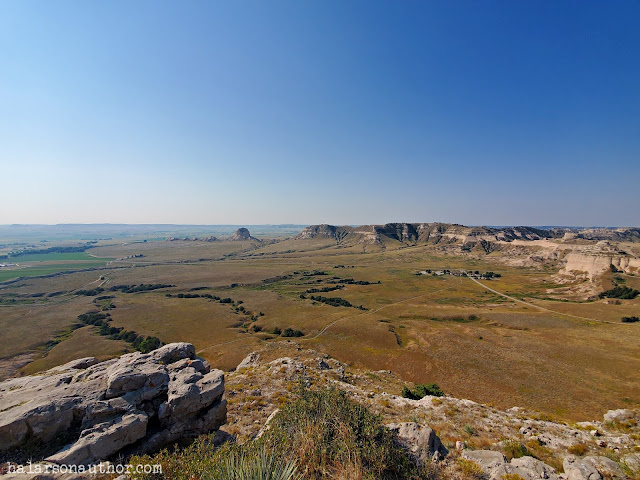 I reached the top of the South Bluff and the views there are simply stunning. The haze you see in the distance is the smoke from the California wildfires. 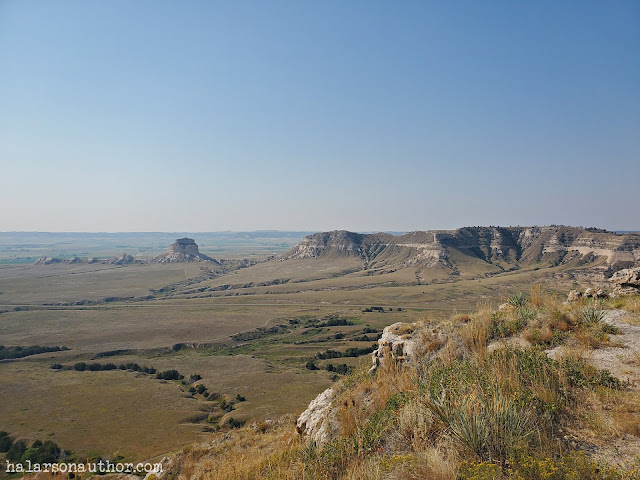 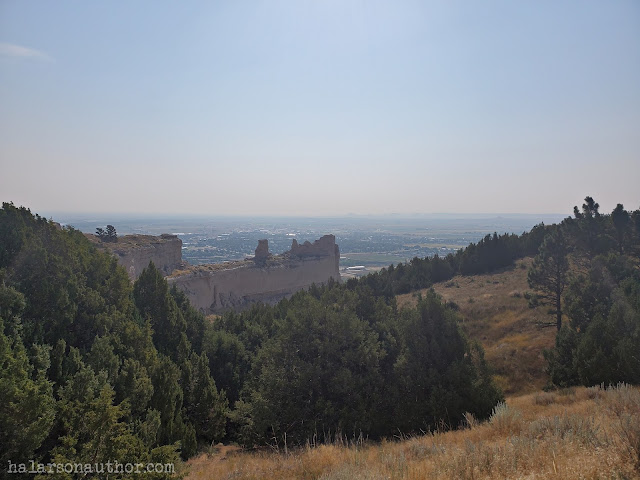 The Saddle Rock Trail moves between the right bluff you see and the tree-covered ridge to its right. 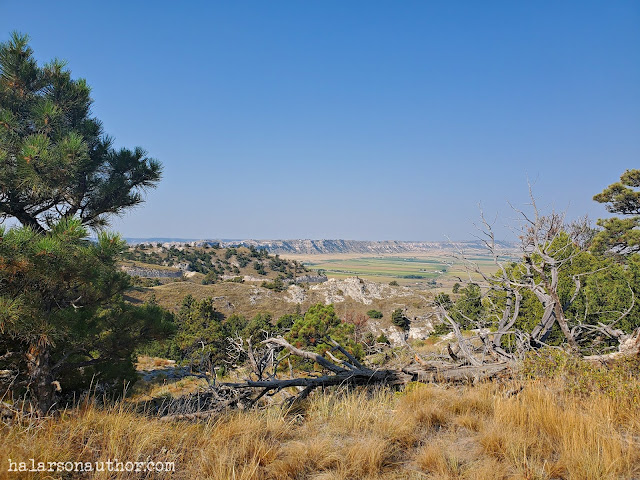 There are easy summit-top trails that allow you to get views in all directions. This was my first glimpse as I neared the North Bluff on the aptly-named North Overlook Trail 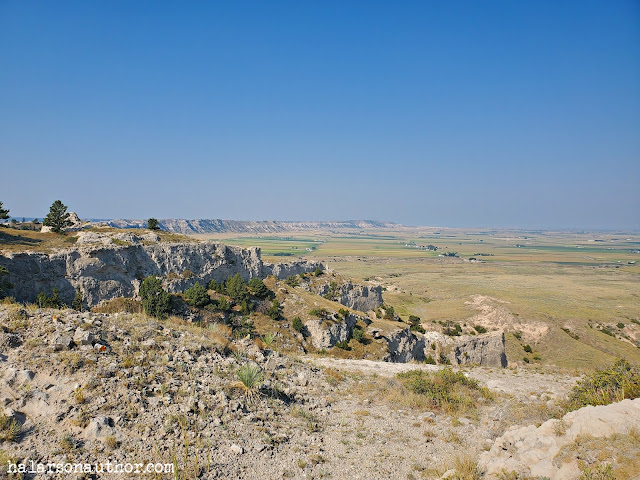 This shot was taken from the North Bluff and it's stunning. You can see for miles, even with the smoke haze. The bluffs extend for seemingly forever into the distance and you can see why these bluffs were a landmark for people as they traveled out West and back, as was the case with the Pony Express Riders. 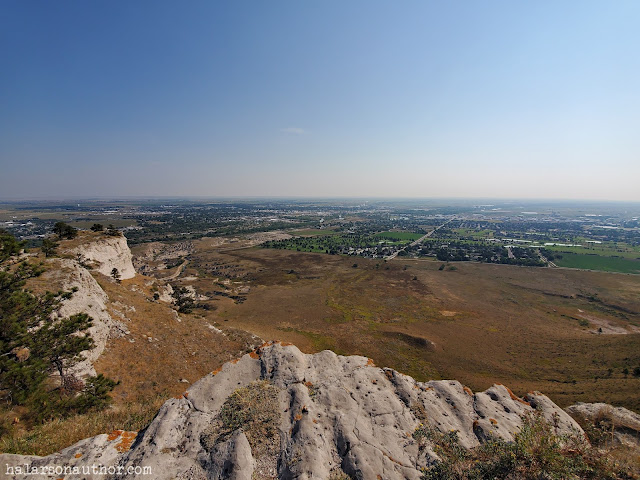 This is a view looking Northeast from the bluffs... 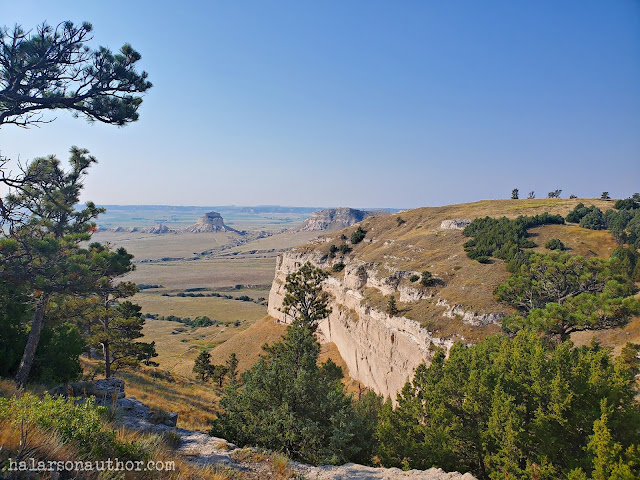 ...while this is one looking Southwest. 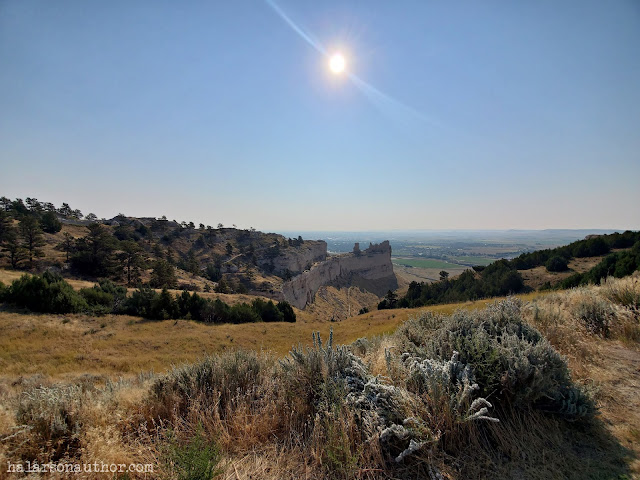 One last beautiful shot as I walked back to the Saddle Rock Trail from the South Overlook Trail.
I really enjoyed the time I spent here, and I ended my trek with a stop at the Visitor's Center. The VC has a passport stamping station for those who have the National Parks Passport - I've always been tempted to get one but never have - and good information about Scottsbluff's history as an important landmark during the Westward Expansion.
Since my daughter was both unenthused and under the weather, I decided to forgo the other things I wanted to do (sniff, sniff) and headed back home early the next morning. On the drive home, I reminded myself that this is how it is now. Your kids get old enough and have several years where they don't want to hang out with you and do your things. And that's okay. I can remember my Dad and I not taking family vacations anymore after our fateful trip up Harney's Peak, and I was the same age as my daughter then. My Dad and I take vacations together now, and someday my kids and I will too.
While I didn't get to see Toadstool or hike in Chadron....it's on my bucket list for a solo trip. Maybe later this Fall. I can't wait.
Labels: Adventures in Travel Musings Photography The Great Outdoors