Recently, in an attempt to find long hiking trails in my area, I did a Google search at work one slow day. What I found was the recently (June 2019) dedicated Brent's Trail. It's an eight-mile trail that connects Gleason-Hubel Wildlife Area, Loess Hills State Forest, and Murray Hill Scenic Overlook. While I've never hiked the Gleason-Hubel Wildlife Area - honestly, I didn't even know it existed - I have hiked in the Loess Hills State Forest and Murray Hill Overlook. In fact, I've posted about both of those places here.

Apparently, it was the dream child of a long-time state forester, Brent Olson. While he passed away before he saw his dream become a reality, the project was completed via a joint effort by the Harrison County Conservation Board and the Iowa Department of Natural Resources. Reading about it piqued my interest pretty high so I emailed the trail map (top) to my Dad - my favorite hiking partner - and asked him if he'd like to try it. Of course, he was totally on board with the idea.

We chose Saturday, October 19th as our day to hike this. One, because of weekend commitments on both of our parts, but mainly because neither one of us likes to take difficult hikes on warm days. The cooler the better for me and Dad both! We met up at Murray Hill Overlook where I picked up my Dad and left his car there. We drove over to Gleason-Hubel where we left my car to be retrieved after the hike. We saw three sets of people during our hike, and they were all doing the half route of starting at one end-point and hiking halfway through and back, or starting mid-point, going to an end-point and then back. This is exactly why we left one car at one end-point: so we could hike the entire trail. It's long enough at 8 miles that 16 miles would've been ridiculous. Maybe someday, though... 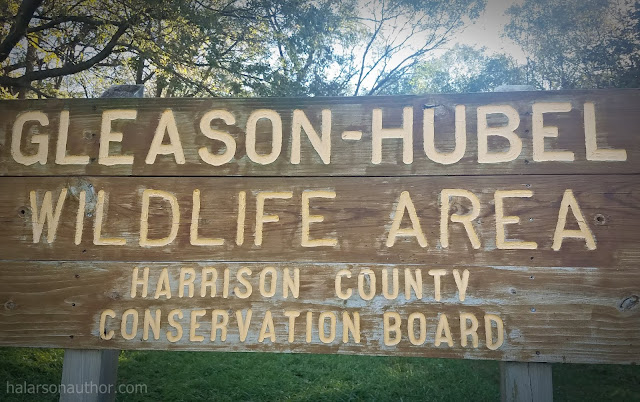 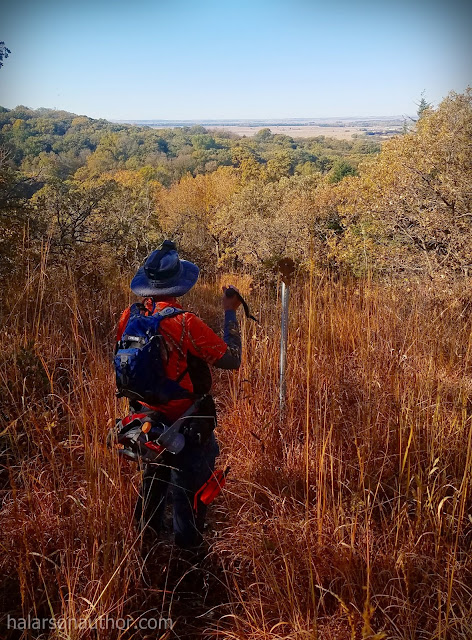 Right from the start, we had to take a steep incline from the bottom of the Hills to the top of the Hills. In fact, this is a pattern that repeats itself four more times! 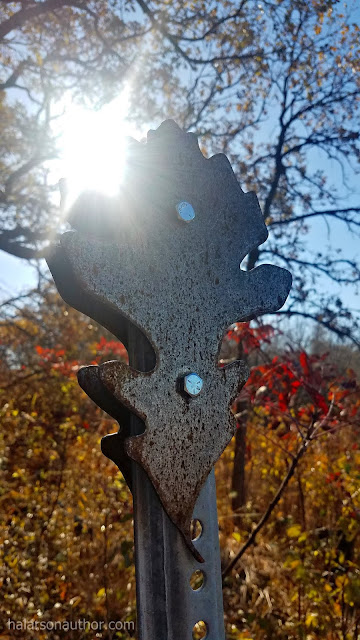 These metal oak leaf signs mark Brent's trail. Unfortunately, they are not always where they should be. For instance, at the top of our first hill in Gleason-Hubel, there was an intersection that wasn't marked. One would assume you'd take the left when you actually go to the right. We knew for sure after we had gone aways to the right and finally saw the sign. Luckily, Dad and I both carry maps, compasses, and trails maps. 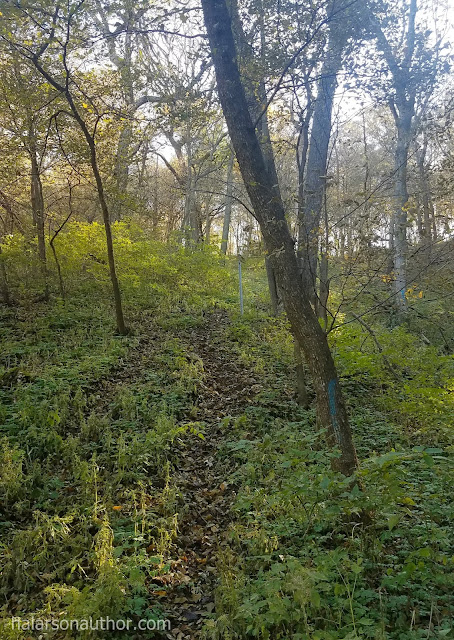 A shot up the first hill. It's hard to tell the incline from a photo, but, trust me, it was a toughie. 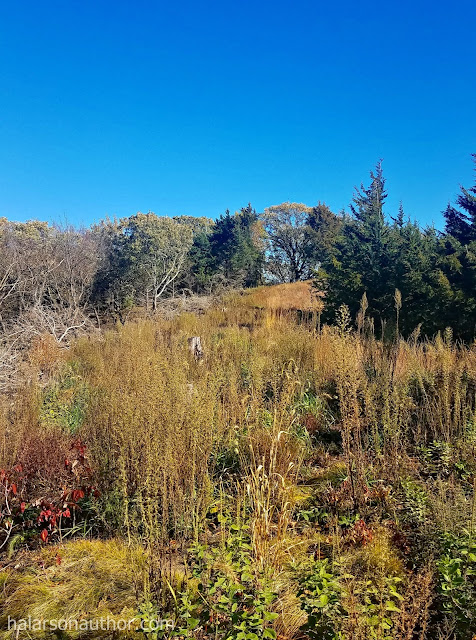 After we got to the top of the first hill, we walked along the ridgeline, which gently waves up and down. The Fall colors were showing off up here and we enjoyed the hike. 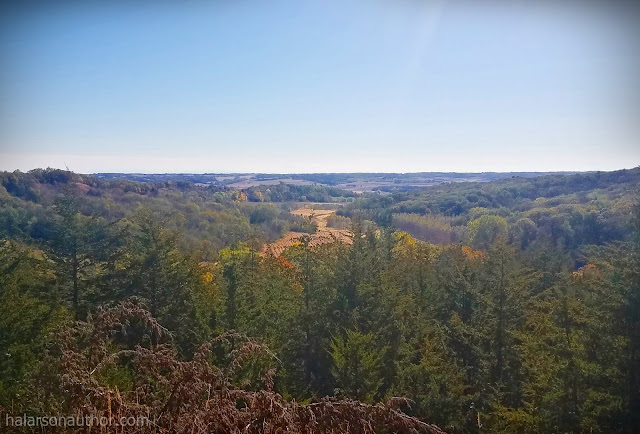 Our first unobstructed view of the landscape from the top of the ridges! Isn't it gorgeous? The small field below is planted with saplings. This is something I've seen before in the Loess Hills State Forest. 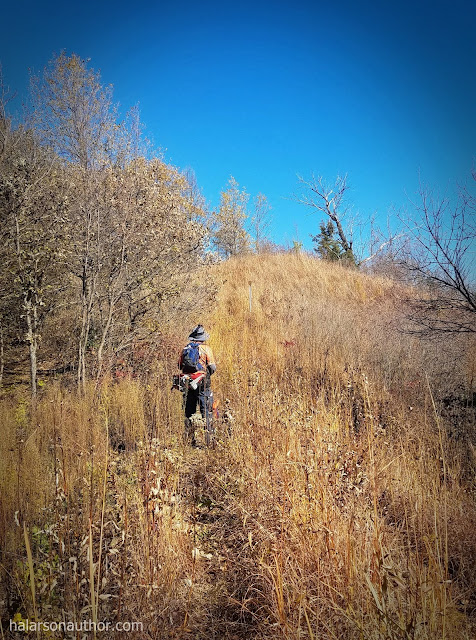 A shot of my Dad climbing up a hill. 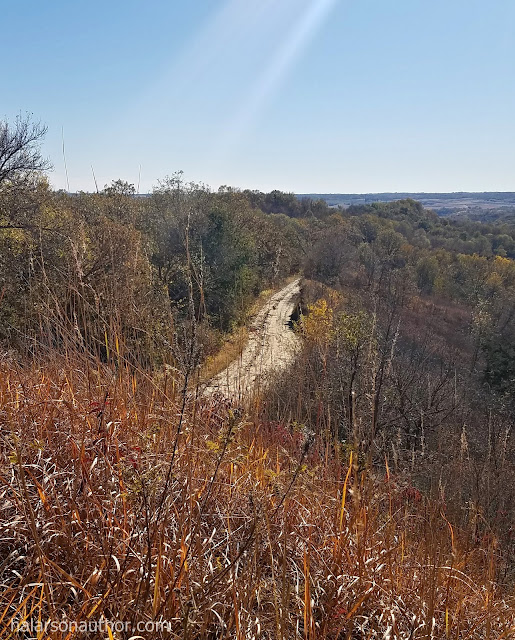 After you journey for away, you come to Fulton Ave, a dirt road that you walk in as a trail connector. 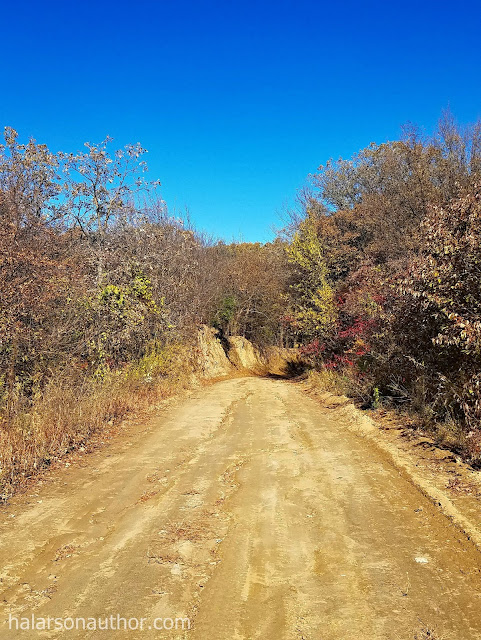 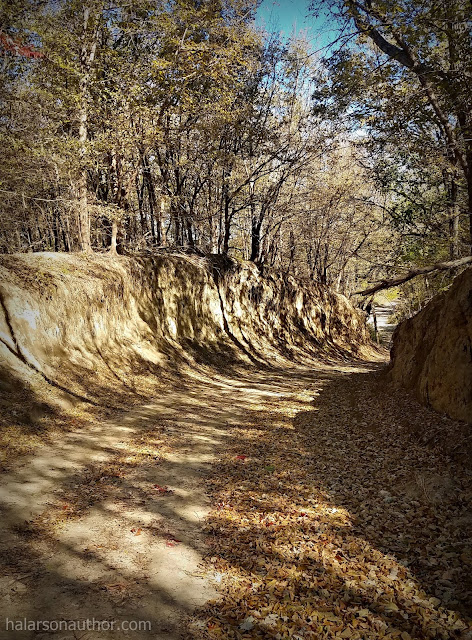 Another dirt "road" along the trail. 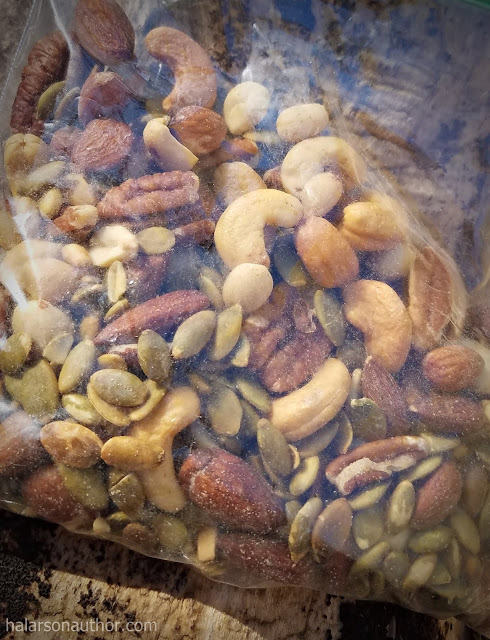 We stopped along the trail for a snack and a water break a few times. One of my favorite snacks - and it's keto, too - are mixed nuts. This combo was premade and contained cashews, almonds, peanuts, hazelnuts, and pepitas. I've learned, the hard way, that you need to eat very light on tough hikes. If you eat very much, your body is going to slow down to digest food and that is the worst. A handful of nuts a few times and 5 bottles of water is what I consumed on the trail. 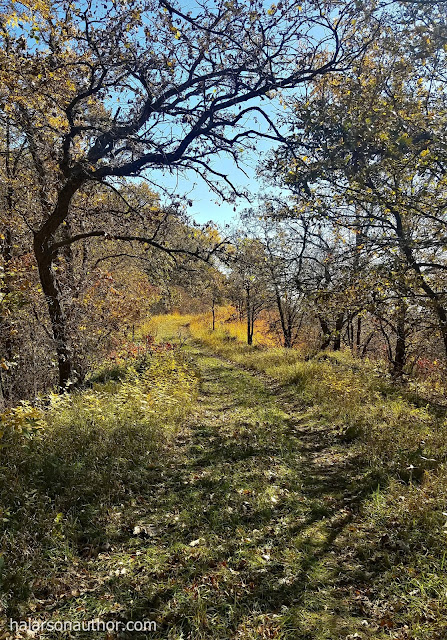 Forest trail. It was an incredible trail in that we saw a variety of landscapes in different settings: valleys, ridgelines, forests, and old dirt roads. 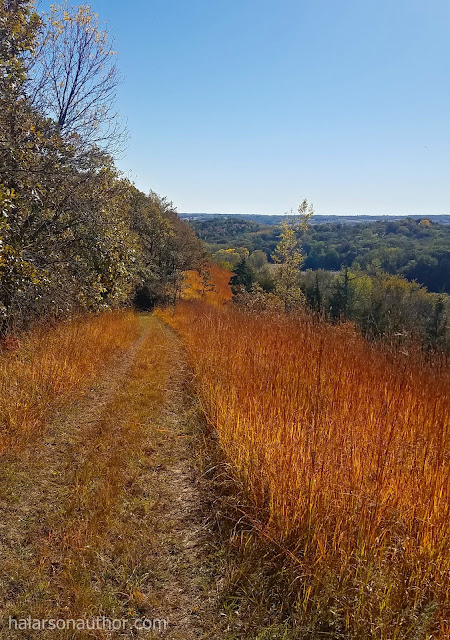 This is the part of the trail that led into the Loess Hills State Forest section of Brent's Trail. It was my favorite section, with good reason. This just looked and felt like what a Saturday in Autumn should look and feel like. Truly stunning. 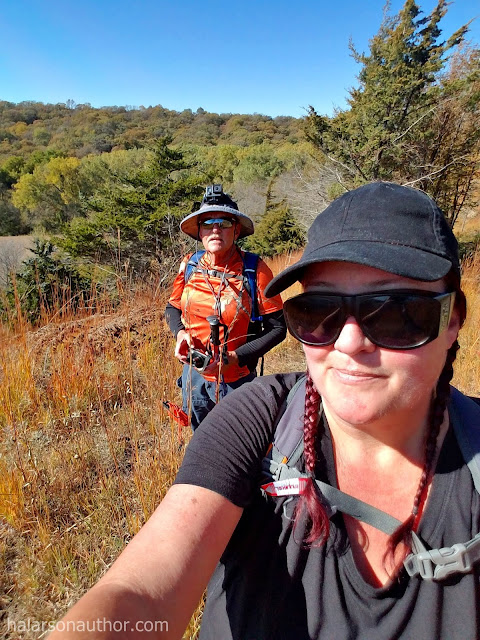 My favorite part of hiking the trail was spending time with my Dad. We both enjoy that a lot. 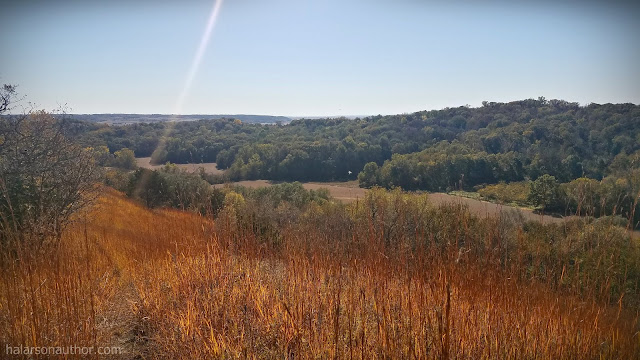 Just look at that view. I could've sat there all day...if it weren't for the Japanese beetles. An invasive species that likes to bite, they were a real nuisance for a few miles. 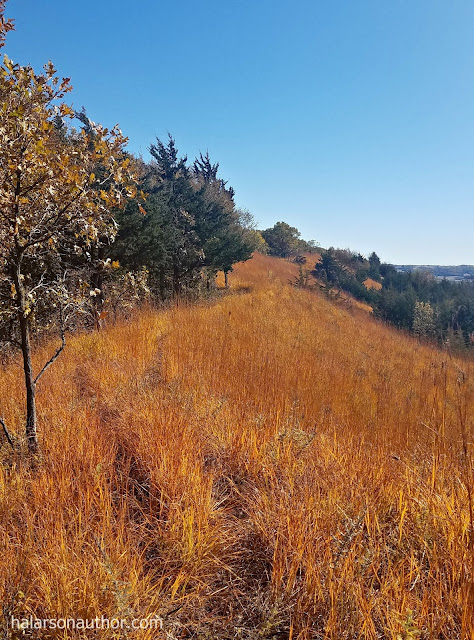 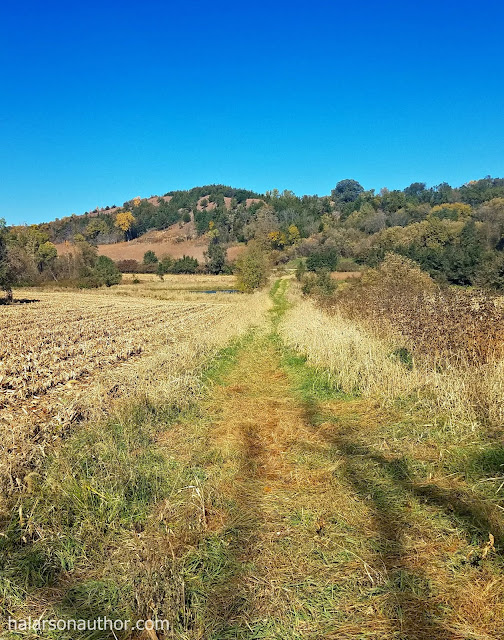 After a while, we came down the hills again and made our way towards the gravel road that one can drive up to the Loess Hills State Forest on. We had to walk on that for aways, take a left into the parking area there, then make our way up the hill for the second half of Brent's Trail. 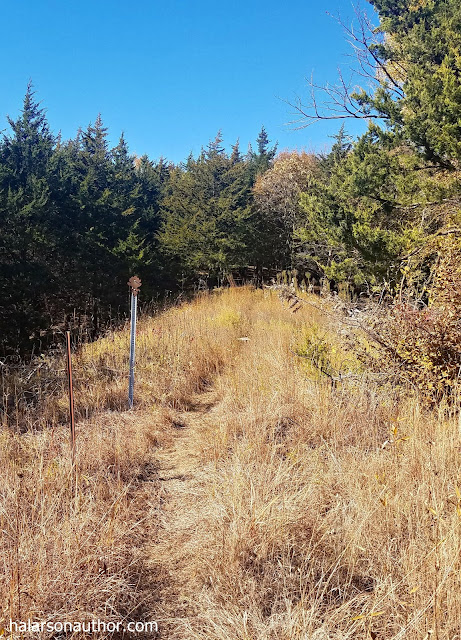 Right around mile 4, according to the map. 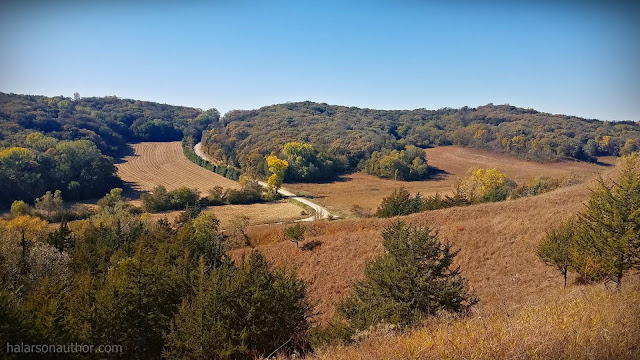 Somewhere between mile 4 and 5, we were treated to more beautiful, expansive views of the terrain below. 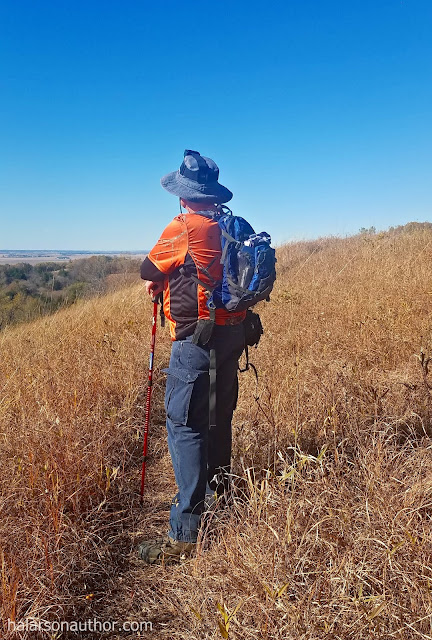 My Dad stops to admire the scenery. 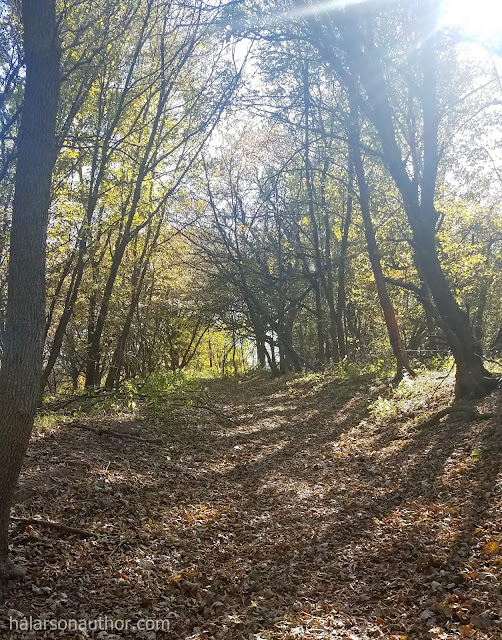 Back into the forest! 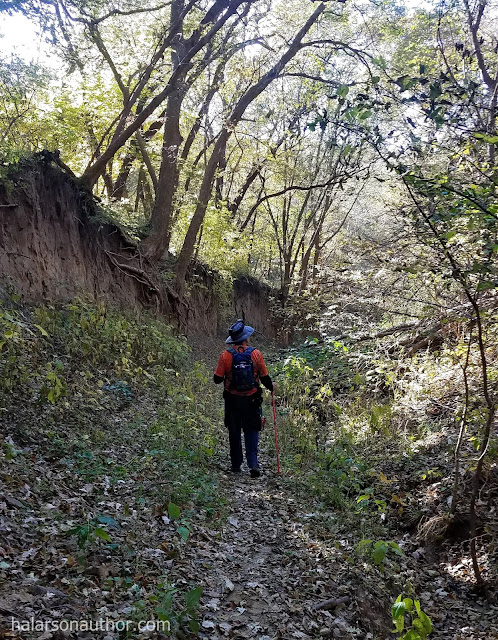 You can take a cut-around between mile 5 and 6 to skip one of the last two hills before Murray Hill Overlook, which we did.

This trail, dedicated in June, is also rough. What I mean by this is that it's not in a maintained state and is difficult to see and/or find at times. For this reason, and the aforementioned difficulty level, I would NOT recommend this hike for anyone who's not a seasoned hiker. Not only do you need to be in great shape, but you also need to have some ability to scout and look for trails in rough terrain. Dad and I discussed ourselves how better in shape we need to be, so this was a good hike in terms of figuring out where we can improve. We're going to hike this again next month.

Having said all that, if you are a seasoned hiker looking for beautiful terrain in a challenging hike, then this trail is definitely for you. It's amazing to have a hike like this here, but not surprising. The Loess Hills, which I lovingly call the Iowa Mountains, are really quite high and rival - in many ways - smaller mountains like the Ozarks. Whoever thinks this area of the country is flat would be dead wrong. So, if you're ready for a challenge, and you live in my neck of the woods, get out there before the snow hits.