In looking over the site this morning, I realized that I never did put up a post on Tuesday, which is unusual, but not unexpected. I had a weird week and didn't really accomplish a lot. This was largely due to the fact that I felt a bit off, which means I could have been fighting off sickness. Sickness has been rampant all around me for weeks now so I wouldn't be surprised if that was the reason my week was so lackluster. Anyway, I'm feeling pretty much back to my normal self this morning, and here in awhile, I'll be off to pick up my Bountiful Baskets order.

This morning, then, it's time to reveal the cover for the first book in my trilogy, The Houses of Hades: The House of Vermilion! 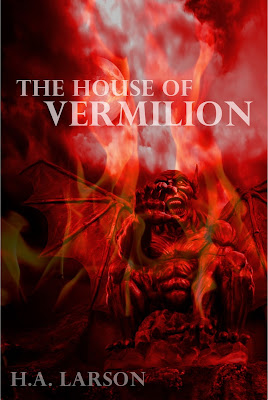 Ta da! Pretty cool, huh? I think you're really going to like this series. Unlike my typical paranormal/horror thrillers, this is more of a mythos fantasy story. So, if you're into that kind of story and storytelling, you'll have to check it out when it's released. For now, how about a short teaser?

"Abbadon gazed out over the Valley that cleaved Akeros in half. The blood-red sun hung in the sky like a giant, fiery eye, but it was his eye that kept a watchful one. His massive, black steed, Rah, neigh its approval underneath him. It was his destiny, this, to keep Hades under the control of his master. This was the land of the House of Vermilion, and he was only passing through. He routinely patrolled the landscape of Hades. He’d ride through Vladik, crossing the Styx River into Kadish, before finally climbing over the Alaz Mountains and into Akeros, making sure everything was as it should be along the way.
When he was born, his purpose was to be an assassin, an enforcer, a protector, and, later, the Warlord of his Master: his younger brother, Lucius. To this end, he was loyal. He would give his own immortal life for that of his brother if the need should ever arise. He admired no one more. While Lucius’ strength was no match for anyone, he had moments of weakness, and this was where Abbadon was needed.
Akeros was his favorite Duchy of Hades. It was less barren than either of the other two, and it was where he could see Juna – the object of his affection. Juna was the only daughter of his nephew Azrahm, the favorite son of Lucius, General of Hades’ army, the Duke of Akeros, and Master of the House of Vermilion. Juna was as cunning as she was stunning, and Abbadon’s desire for her was great. He hoped to make her his bride one day. He knew he could have her if he wanted, but what he really wanted was for her to want him back. He would not force her into marriage with him if it wasn’t what she wanted.
While she was flirtatious with him, she had rebuffed anything more than that. It was this flirting, this teasing, that drove him mad. He knew she was toying with his affections, but he loved her all the same. She was still young, and he hoped the folly of youth would give way to the wisdom of age."


Well, what do you think? Let me know in the comments!

I'm getting ready to send out my monthly newsletter, which this month contains the third part of my short story "The Scream". Sign up by end of today and I'll send you the past two installments as well so you can catch up!
Labels: Books & Music & Movies The Author