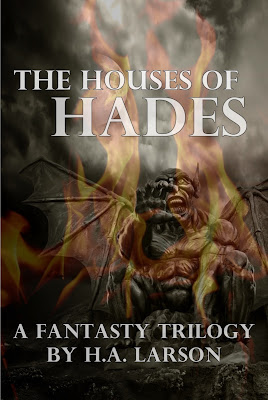 I have an exciting announcement to make: I'm writing a trilogy!

Not too long ago, I talked about how I wasn't really feeling the new book I had started so decided to put it on hold until a later date. I also talked about how I felt called to work on a trilogy I had already sketched out in some fair detail. It's called The Houses of Hades, and I'm working on it in earnest. I'm hoping to have the first in the series - The House of Vermilion - out in late Fall or early Winter of this year.

This trilogy of tales will be different than the thrillers I have been writing. This is more of a fantasy series and takes my readers behind the mythos of good and evil, putting faces to them and, in the process, maybe realizing that not everything is as it seems. You'll also be reintroduced to Cazhir, a character from my book The Box.

It's an exciting time for me! I can really tell how far I've come as a writer, and I'm looking forward to unveiling this to the world. In the next month or two, I'll be making a trailer or two, giving you teasers, and unveiling the cover. Mark your calendars and stay tuned!
Labels: Books & Music & Movies The Author