Lake of the Ozarks: Part Two 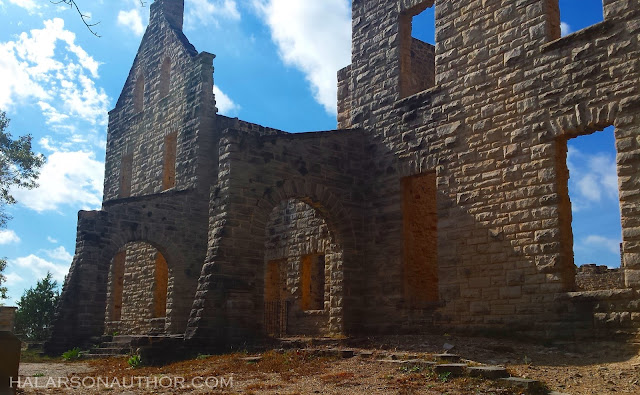 We recently took a long weekender down to Lake of the Ozarks for The Teen's 18th birthday. Today, then, it's time to reveal part two of the posting for the trip, with this part being about our day spent at Ha Ha Tonka State Park. Of all the parks I've been to over the years, this one ranks up there as one of my favorites. There were so many trails to hike, of varying difficulty, and the entire place was a feast for the eyes. Each trail we took afforded us a completely different view, and it was wonderful.

Located on the northern edge of the Ozark Mountains, Ha Ha Tonka S.P. rises above it's surroundings like a King. Indeed, one of it's signature attractions is some old castle ruins. Now, I'm sure you're wondering, "Castle ruins? In America? In Missouri?!" 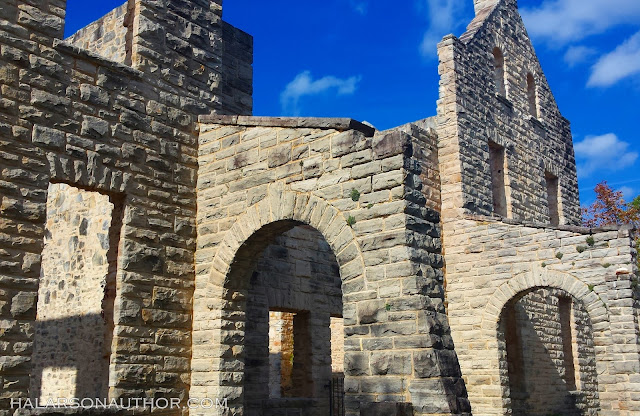 Let me assure you that, yes, there is indeed castle ruins at the park. The area was once the private property of Robert Snyder Sr. who began construction of an authentic European-style castle-mansion in 1905. He picked the location for just that reason: location. His castle afforded the occupants majestic views of the Ozark Mountains and the Lake below.

Tragically, he perished in a car accident in 1906, and his sons then completed the mansion in the 1920s. After the stock market crash, they eventually sold the home to a private entity that turned it into a hotel in the late 1930s. Unfortunately, the hotel burned in a terrible fire in 1942 and sat abandoned for many years.

The State of Missouri, who already owned much of the surrounding area, purchased the ruins and grounds in the late 1970s, turning the entire area into a state park. Today, the ruins are deemed unsafe and a barrier prevents one from getting too close, or inside, the ruins. 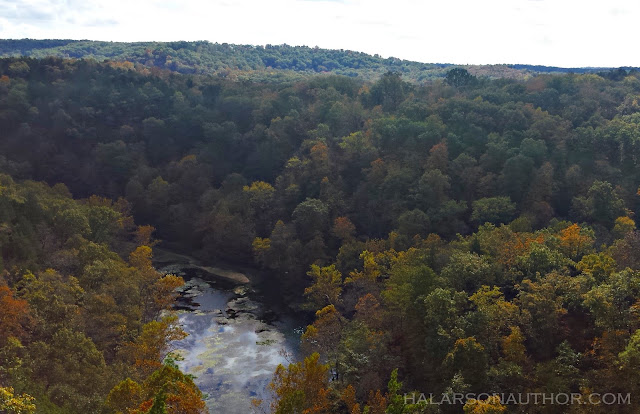 The trail to the castle ruins (Castle Trail), and it's old water tower (Dell Rim Trail), are relatively easy and either paved or covered in boardwalk. The path lies along the ridges of the mountains, making it easy to see the sweeping, breathtaking views of the surrounding scenery. 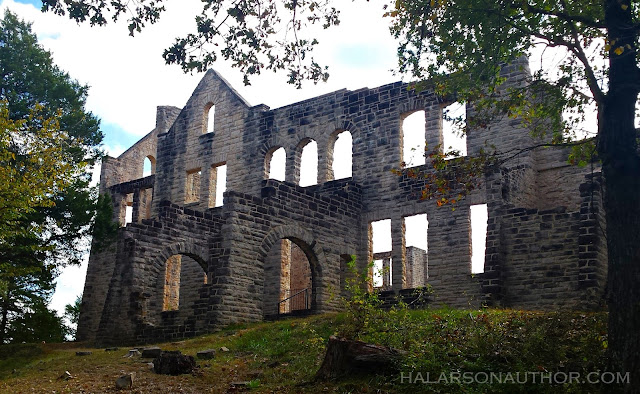 The former front entrance to the castle, on the opposite side of the Lake. 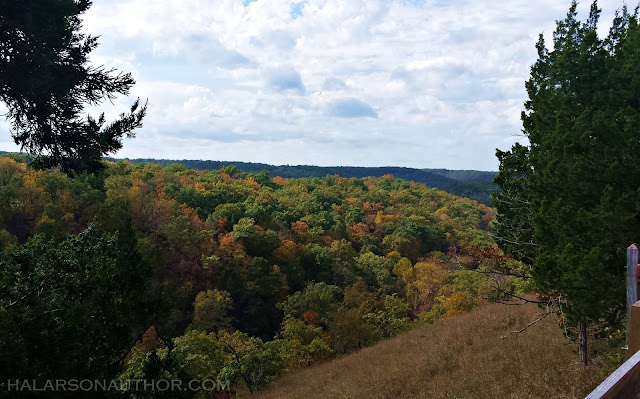 A view from the boardwalk on the Dell Rim Trail. This trail was the pick of The Teen. 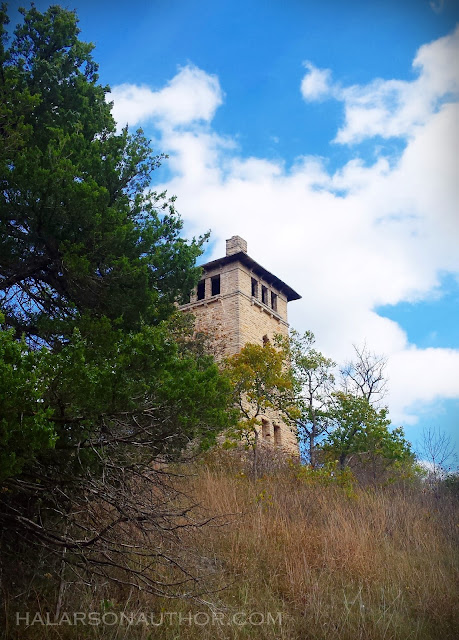 The Castle also had it's own water tower, but it's located a good half mile away from it on the Dell Rim Trail. 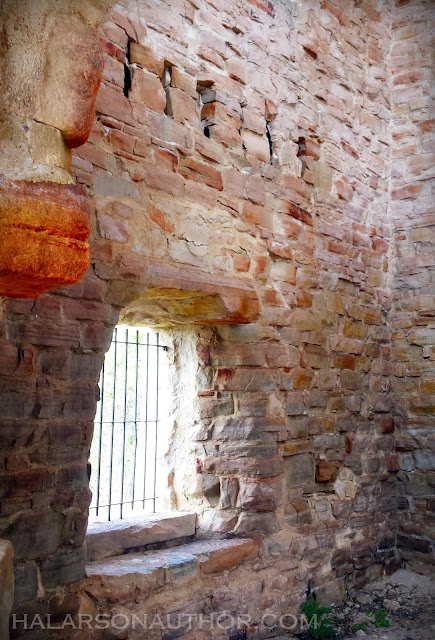 Just like the Castle ruins, one cannot enter the old water tower. A large metal gate prevents one from entering the structure or access to the ground surrounding it. I stuck my phone through the metal bars of the gate, however, and took a few pictures of the inside.

All together, we hiked along the Castle Trail/Boardwalk trail for about 1.8 miles of fairly easy hiking. 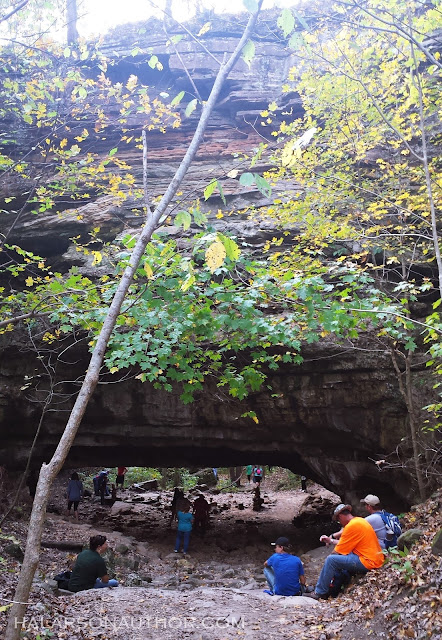 After leaving Dell Rim Trail, we headed over to the Colosseum Trail. While just a little over a half of a mile, it's considered a rugged trail (i.e. hard). This was my Dad's pick as it has a natural bridge right as you get down the first section of the trail. You can see the "bridge" in the photo above, and it was pretty cool! 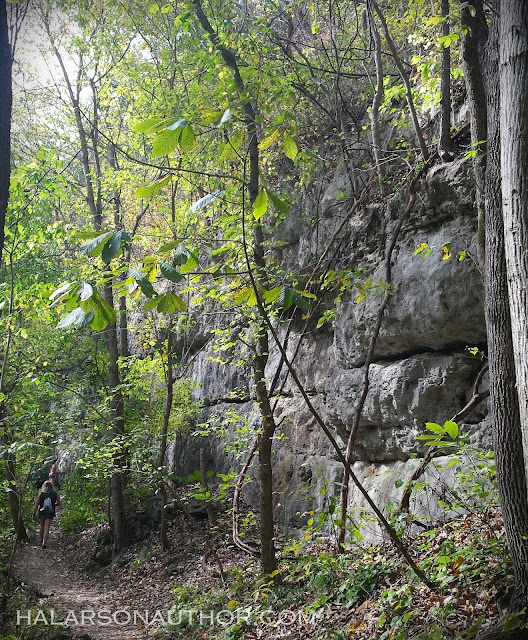 The majority of the people we saw at the natural bridge didn't venture any farther down the trail, but we did - of course. The rock face of the mountains ran along the right side of us as we passed the bridge. 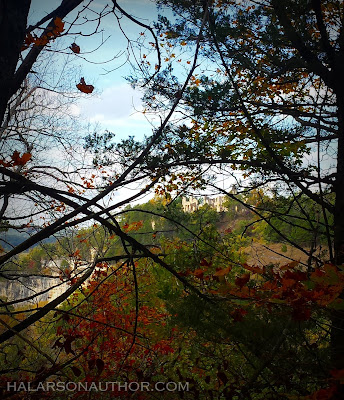 We had to climb up and around in a circle where we found ourselves directly across from the Castle ruins. I couldn't find a good spot to take a photo, as all the trees criss-crossed endlessly, but I did the best I could. It sure looks different from here, huh? 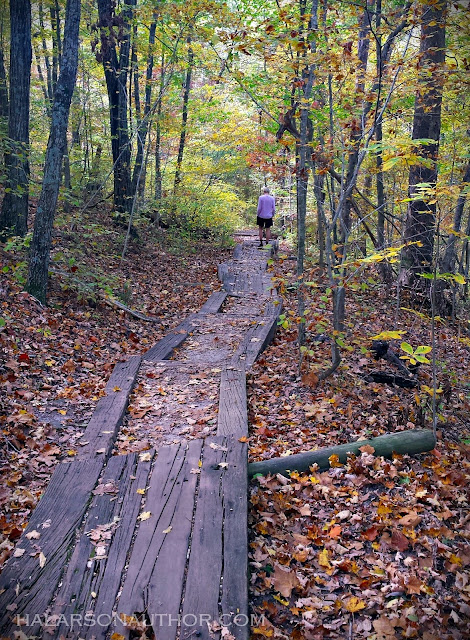 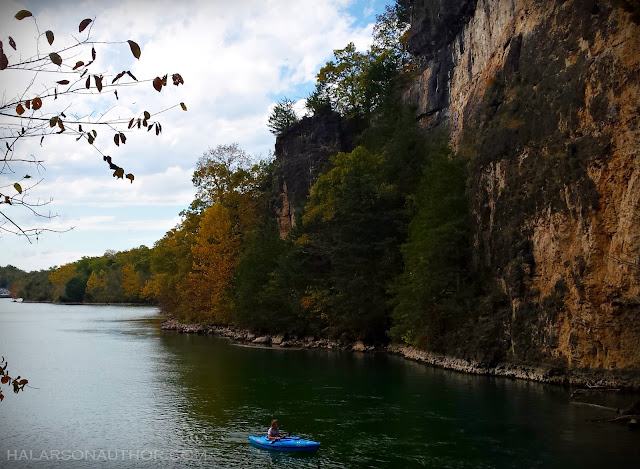 When we finally reached the Island Trail - which takes one to a lake inlet, a cave, and a balanced boulder - it was also a hard trail. At, again, a half of a mile of rugged trail, we really got a workout taking it. It was well worth it though as the scenery was breathtaking (in the picture above, you can see a kayaker near the last inlet surrounding by the rocky mountain face), the weather was fantastic, and we got a killer workout without having to hike for hours and hours.

We then took a water/snack break before heading up the Spring Trail connector. After it was all said and done, we were duly impressed with this park. I sure hope you get a chance to visit it one day as it is well worth it. A bountiful park full of beauty and sights to see, it's one that shouldn't be missed!