Good morning! I'm working at my desk on this fine Sunday after fueling up on a properly large and delicious breakfast sandwich, washed down with a cup of coffee. You all know I'm vegan, and for awhile now I've been hearing about Follow Your Heart's (FYH) Vegan Egg. I first heard of FYH when someone on one of the vegan facebook pages I follow posted their Vegan Bleu Cheese dressing. I really missed Wedge Salad, so I set about the streets of Omaha to find some. To my disappointment, I discovered, at that time, that FYH products weren't sold here. So, in an effort to get what I wanted, I asked my local Akin's if they could special-order it for me. They did! After I bought all their first case, I had them order more.

I noticed, not long after that, that Hy-Vee started carrying a couple of their sliced cheeses, and now, a few months later, I can find a good selection of FYH at all my usual vegan haunts: Hy-Vee, Whole Foods, Natural Grocers, and Akin's. I was in Natural Grocers stocking up on Daiya (it was on sale!), tofu, Better than Bouillon, TVP, and nooch (nutritional yeast), and I ran across FYH's vegan egg. I brought some home and immediately set about making my usual breakfast sandwich. This sandwich is composed of a chickpea omelette (find a recipe for this in my Cooking & Recipes tab), Daiya shreds (or any other vegan cheese you prefer), and homemade TVP sausage. This time, instead of the chickpea omelette, I used the FYH egg. 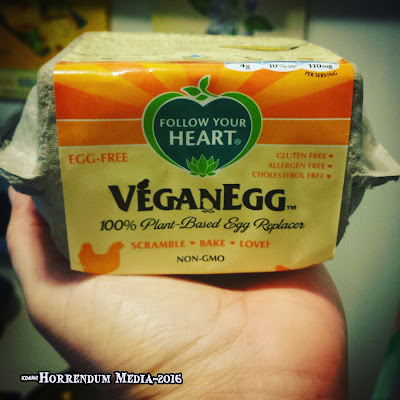 I have to say, I cannot believe how much like an egg this stuff looks, smells, and tastes like what I remember eggs as. I didn't scramble it, as suggested, but otherwise followed the simple instructions. I fried it as a small, whole, eggy omelette. I topped it with the Daiya shreds, and then my homemade TVP sausage. It was amazingly delicious!  You have to try this stuff. 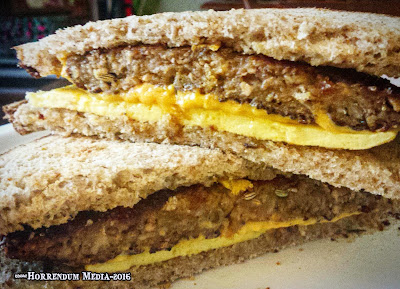 This is the finished sandwich! Here's the recipe for the TVP sausage. The only differences I do with the sausage is that I double the recipe and then add 3/4 cup of vital wheat gluten. I keep these on hand for making sandwiches, for crumbling on pizza, or throwing into some pasta.