Trip the Seattle: Part One 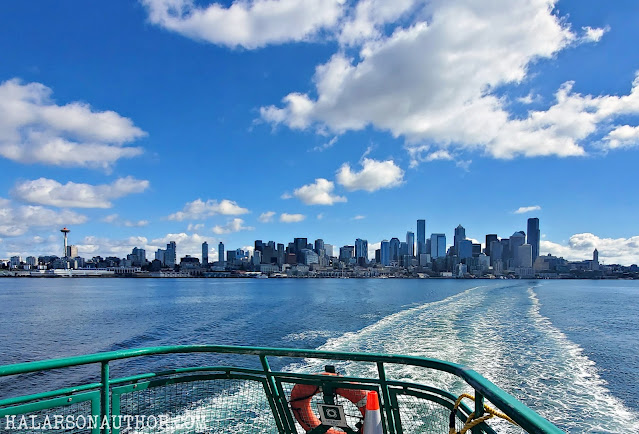 Back in September, I made my annual trip to Portland - with a twist. This year, I met my bestie Lisa in Portland where we took the train to Seattle for a few days. Before I get ahead of myself, let's start at the beginning - and it's quite the tale!
I flew out of Omaha on a Saturday afternoon with the intention of making it to Portland that evening after a two-hour layover in Dallas where I was going to get dinner and a Bloody Mary. Lisa had a reservation for that night at a neat hotel downtown PDX and I was so looking forward to a relaxing evening with my bestie. Well, it wasn't meant to be. My flight out was on American Airlines and as we got close to Dallas the pilot came on and said there were terrible storms over Dallas and that the plane was low on fuel so we'd need to divert to Oklahoma City.
After sitting in OKC for what felt like forever, we were finally in the air again. When we landed in Dallas, I had a mere 20 minutes to get across the airport for my connecting flight. I got there with five minutes to spare but since they close the doors to connecting flights 15 minutes in advance, they wouldn't let me on. I was upset as it wasn't my fault but they directed me to the customer service counter two gates down. As I stood in line, I noticed (through the airline app) that my connecting flight was delayed but when I went back down to that gate to check, they still wouldn't let me on.
As I stood in the customer service line which was HUGE and getting longer by the minute, I started chatting with the lady in front of me and the lady behind me. All three of us were on different flights and the same thing happened to all of us: pilots announced on our three separate flights that the weather was bad and the plane was low on fuel. All of our planes were diverted to OKC. Frankly, the whole thing sounded a bit suspicious, but since there wasn't much I could do, I waited for my turn at the counter.
When I finally got to the counter, I was given vouchers for transportation back and forth from the airport, a $15 food voucher good at the DFW airport, a free night stay at the Hyatt Place, and a ticket for a connecting flight the next morning. Things were looking up! I LOVE Hyatt Place (each room has a living area as well as a bed and they have the best breakfast) so I eagerly waited for their shuttle to come to pick me up.
On the way there, the shuttle driver told me there was nothing but clear, blue skies in Dallas all day so American Airlines seemed even more suspicious to me at that point. Obviously, they lied to us all for whatever reason. Still, I was happy to get checked in and since they have a small bar and a night menu, I ordered a cheese pizza and the long-awaited Bloody Mary! 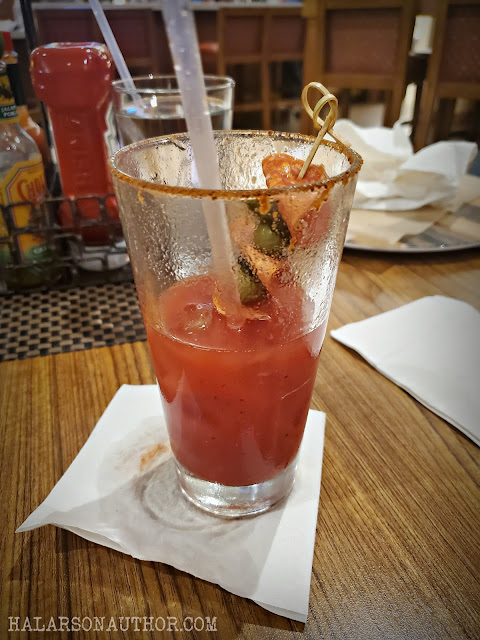 Behold the Bloody Mary! Man, it was delicious.
Later, I talked with Lisa on the phone in the living area of my room so we kinda started our time together. Our train was supposed to leave at noon on Sunday but since my flight was delayed, we had to adjust our train tickets (and pay an extra $45) to take the 3:00 train instead. I finally landed in PDX and I met up with Lisa by the rail, which she took out to meet me. We promptly got back on it and headed down to the Amtrak station. 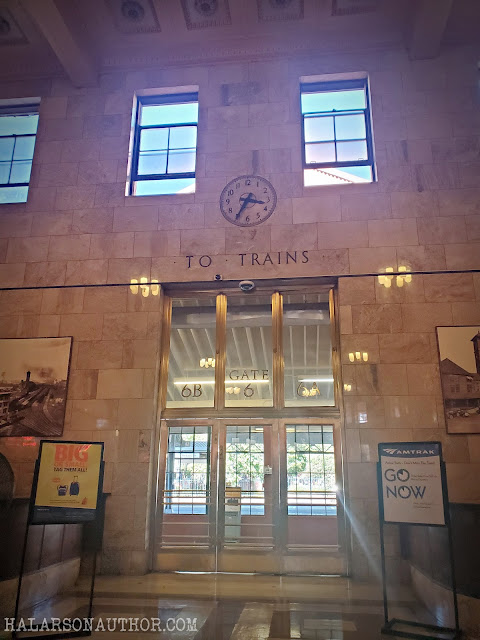 The station reminds me of Union Station in Omaha, which used to be a train station back in the day. 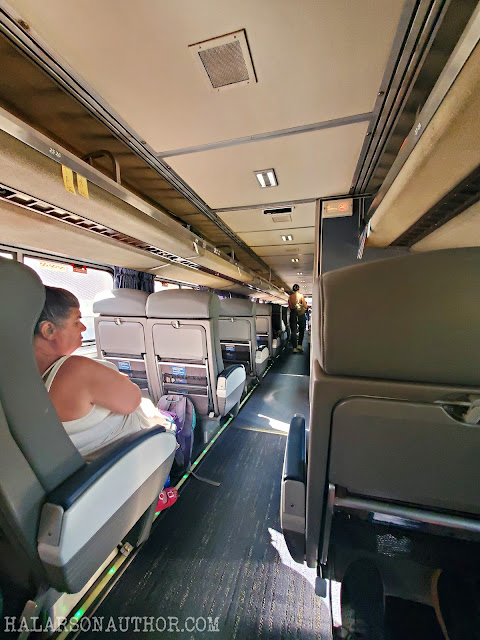 I've said it before but I'll say it again: train travel is far superior to airline travel. Trains are spacious, comfortable, have dining and snack cars, and are set up for people to sleep if they are going somewhere that takes longer than a day. 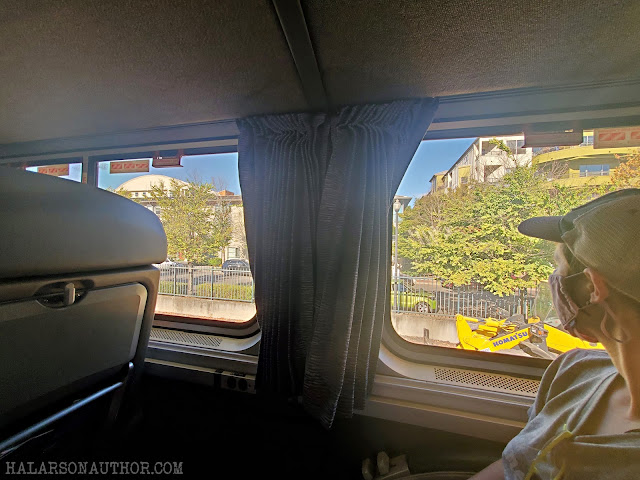 It's also a great way to catch the views of the surrounding countryside. This was something I really enjoyed on Irish trains. 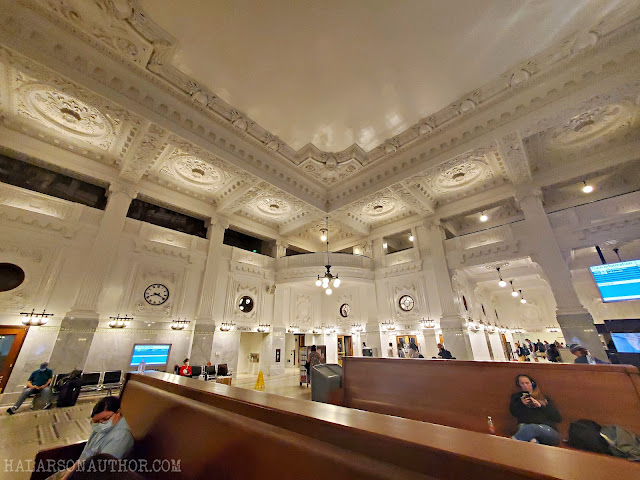 We arrived in Seattle after dark but the King Street Station was bright, ornate, and beautiful. 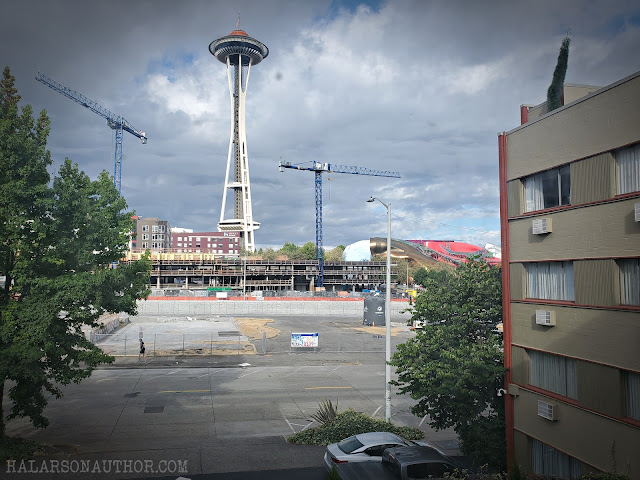 It was late (and dark) when we made it to our hotel that evening, so we just visited. The next morning, we were able to see the Space Needle - one of the main reasons I booked the place. 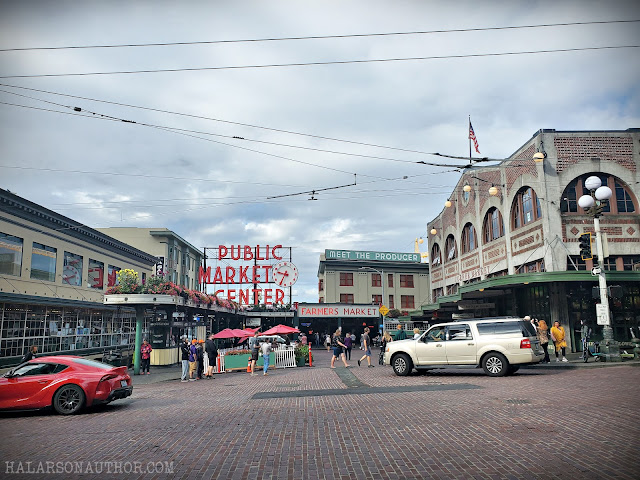 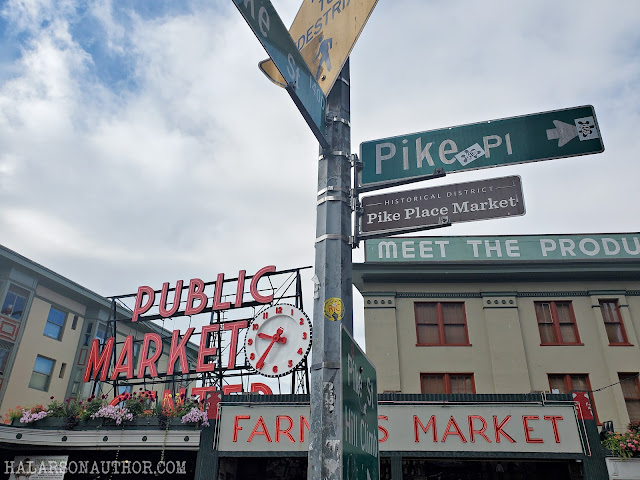 It was Monday, but you would have thought it was a Saturday with the amount of people around. I can only imagine how much busier it is on a weekend. 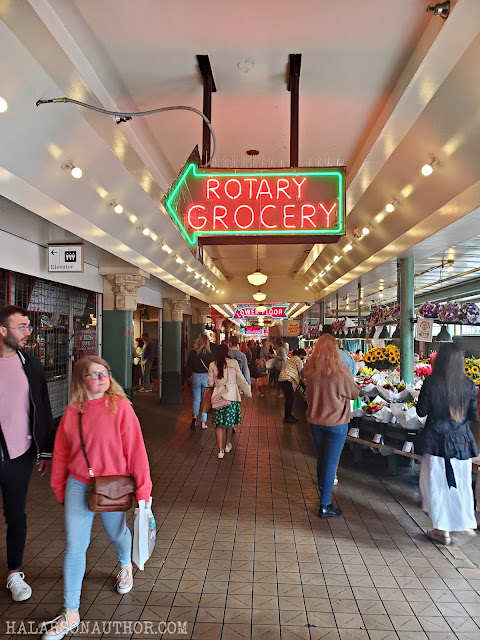 Pike's Market is essentially a large farmer's market where you can find nearly anything for sale and is interspersed with restaurants, artisans, and various unique shops. The top floor is partially exposed to the outside and is composed of one long, main hallway with offshoot hallways and stairways that lead to outside patios and a lower floor. 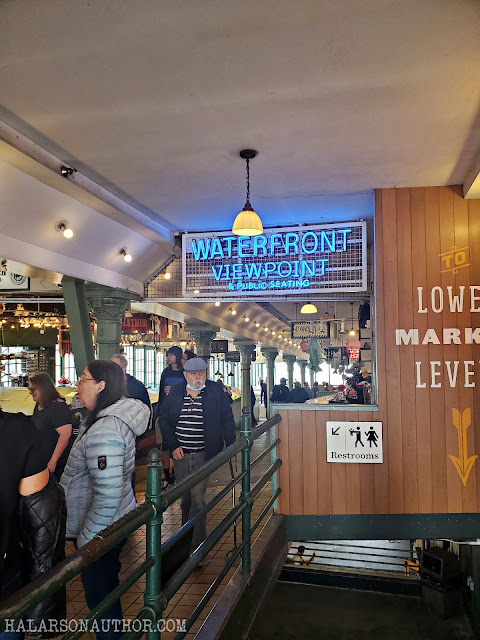 Like this intersecting hallway that will take out to see the waterfront and a set of stairs going down. 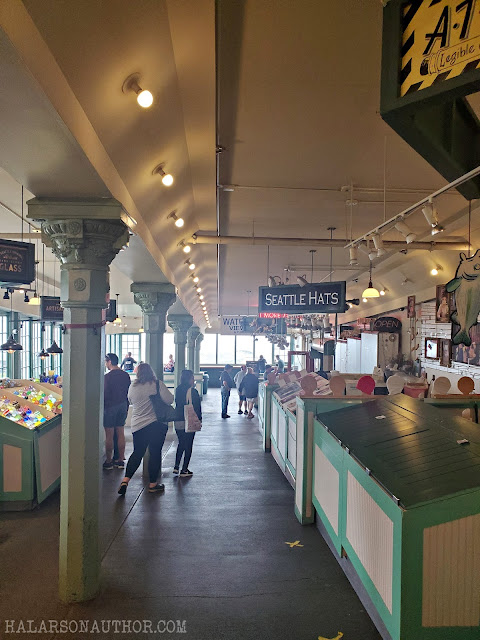 The walkway to the Viewing Point. 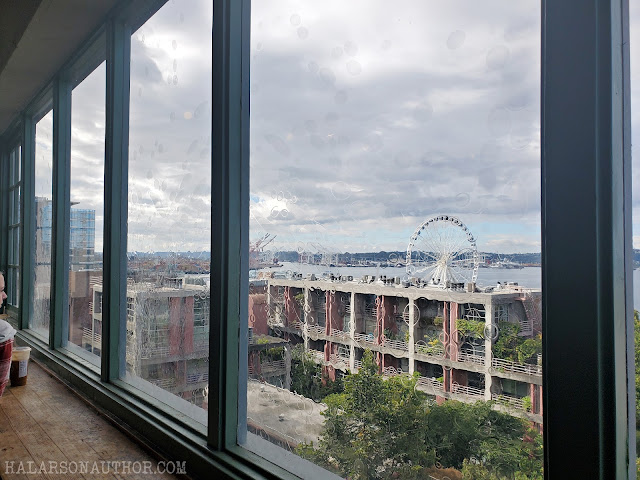 A view to the waterfront. 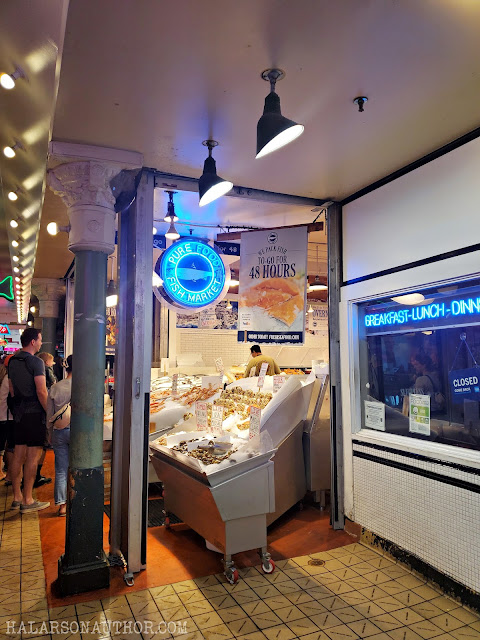 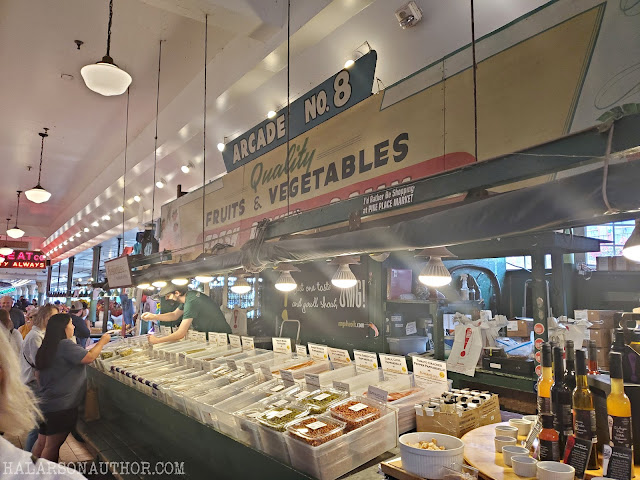 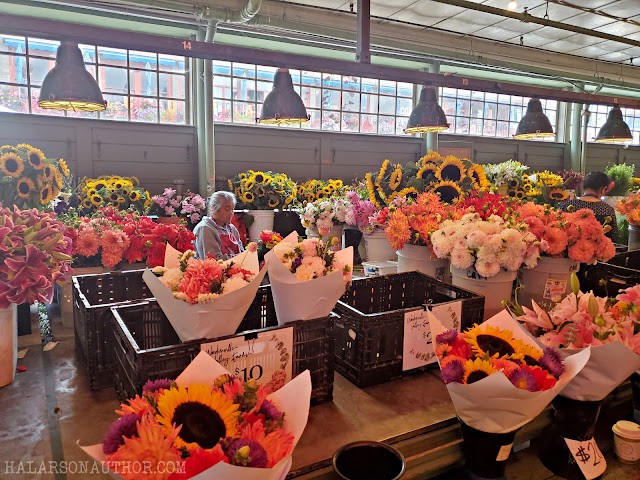 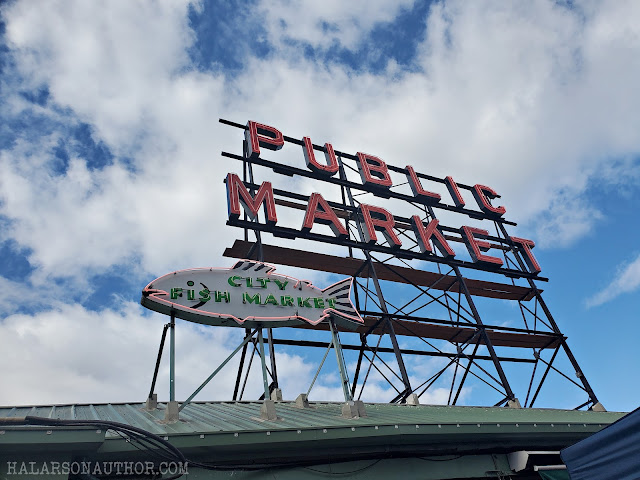 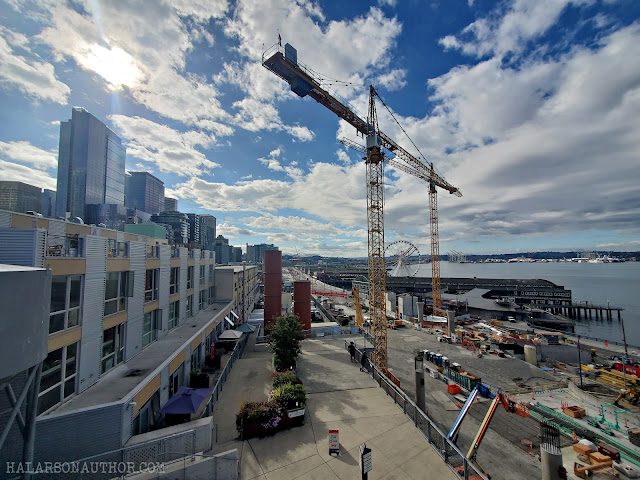 We stepped outside to get a better view of the waterfront. 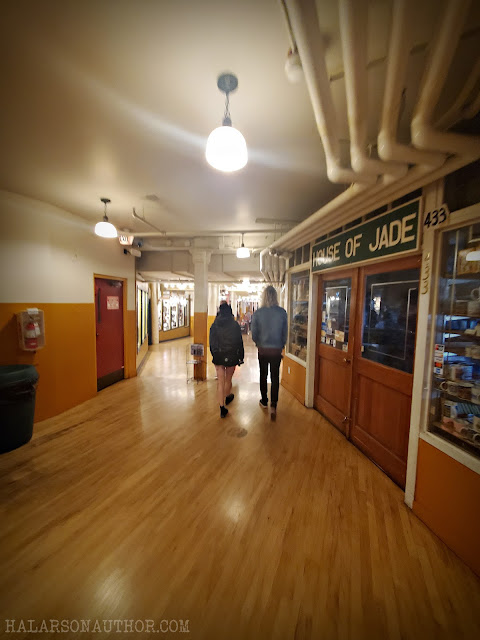 We then went to the Market's lower level. 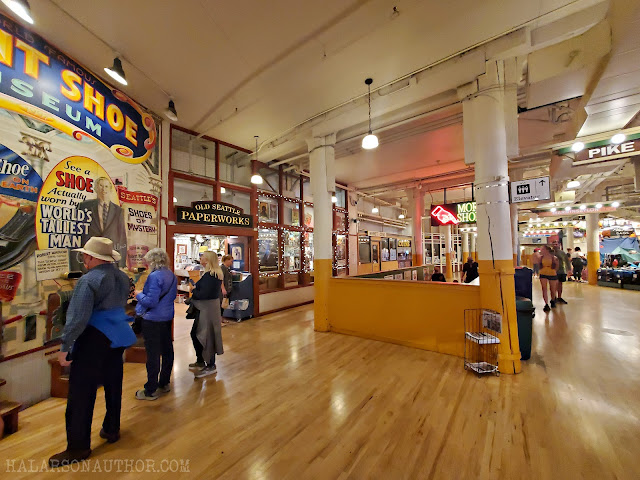 There were a lot of interesting storefronts down here. 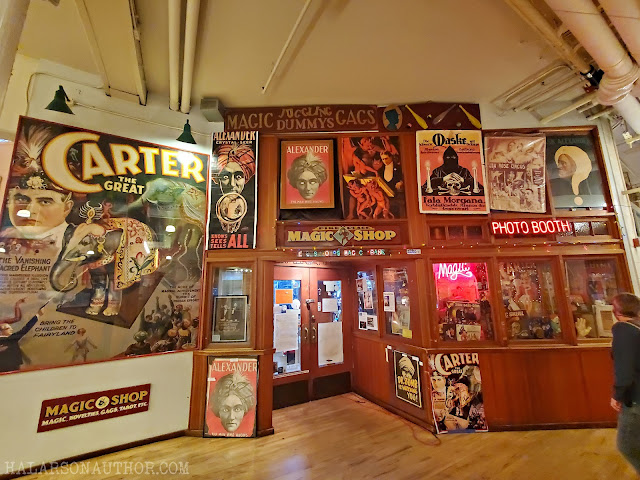 Including this magic shop. I was bummed it wasn't open because I would have loved to see what was for sale. 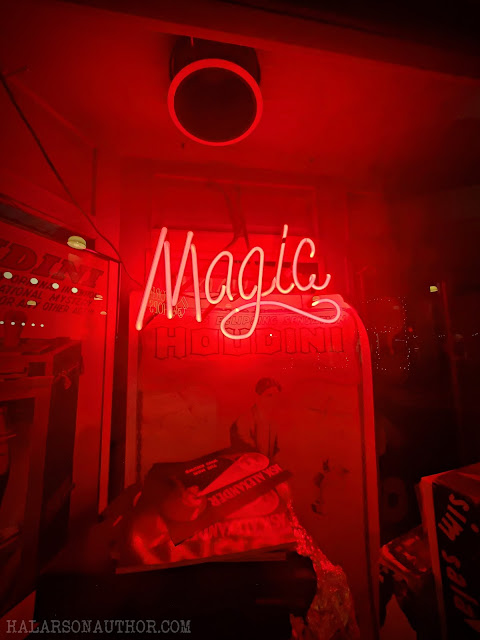 Magic, indeed.
There are so many cool pictures and things that we did that there's no way I could fit all of this into one post. So, there's at least one more post - but possibly two - in the future.
Have a great week!
Labels: Adventures in Travel Musings Photography The Great Outdoors