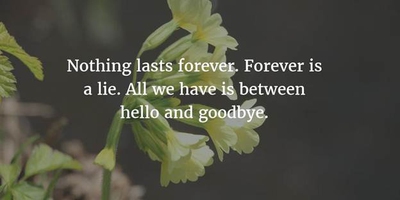 I need to write this post but I've struggled with the right words or how to deliver them. So, I'm just going to dive in, head first.

No one gets married with intentions of getting divorced, and I was no exception. When I got married, I was completely in love with my husband and expected to be married until one of us died. Sure, we had our problems but I was confident that we could weather any storm.

Life changes, and so do we. The fluid nature of life sometimes causes the way we feel about things and the way we look at the world to change. And that's okay. Holding on to things that no longer suit us is detrimental.

But, saying goodbye is often hard, no matter how much you feel you're ready for that moment. I struggled with my goodbye for a long time, flip-flopping back and forth between hello and goodbye before I finally came to the utter realization that the latter was the right one. Still, it took a long time before I could finally let that goodbye float off into the wind to be freshened by the breeze. Truth be told, I half-heartedly said goodbye a handful of times before the final one.

There are a lot of emotions that come into play in a situation like this. It's never easy to just walk away from something that you've been a part of for the better part of twenty years and just pretend like it didn't matter. Because it did matter. I had all those years of memories, good and bad, and two children that we raised together. More than that, we started from a place of deep, strong emotions of love, friendship, and partnership.

Over the years, those emotions turned into different emotions. We both struggled internally with things, he more than I, and that had a lasting impact on our relationship. Because of this, he changed drastically. I changed as well, but in a different way. I blossomed into a different kind of person, and he, into the person he hid for so very long. Add on to that layers of fights, deceit, and betrayal. When the dust settled, we weren't right for each other anymore.

While we said our goodbyes to what we were, we said hello to a new version of us. This new version sees us as friends, co-parents, and supporters of each other in times of trouble. It's a good version. In fact, it's much better than the old version. Change isn't always bad, but it can be difficult to get through.

Saying goodbye is never easy, but sometimes it's inevitable.

When one door closes another one opens.