It's time to share my final post from my vacation this year. I know it's a bit late, but I had some other posts I really wanted to share first. Also, the final days of vacation weren't all I had hoped they would be, so I wasn't as eager to share it. But, now that a few months have passed, I feel better about vacation overall, so let's see the finale.

Vacation ended with a long weekend in New Orleans that I had really been looking forward to in the days leading up to it. With finances as tight as they have been over the past year and a half, getting away for a trip like this just hasn't been on my radar. This trip was for business, however, so it was funded by the organization I'm involved with which was both a good and a bad thing. On the one hand, I got a trip to New Orleans out of it, but on the other hand, I was representing the organization most of the time so didn't get much in the way of sightseeing. Thinking back on it, I realize that I did have a good time representing the organization and I did make the most out of what free time was available to me. 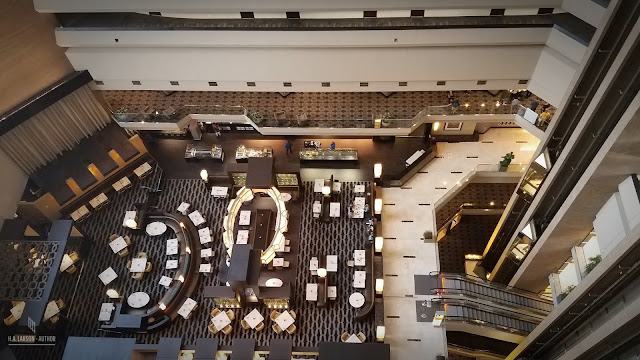 Our room was on about the 13th floor, and this was the view from the outside of our room looking down at the third-floor bar. To the right, you can see the escalators and the elevator. 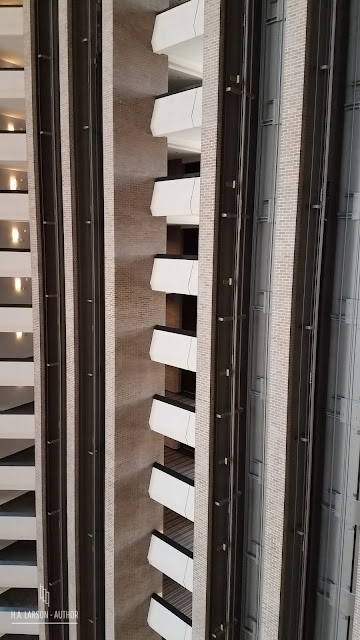 It's hard to grasp the scale of size from photographs, but after I took a photo of the third floor, I panned up to eye level to snap this photo. The rooms are built in a circle around the center of the hotel leaving balconies as far up as the eye can see. Again, we're on the 13th floor and you can see how far up the floors continue. As a side note, there are 32 floors in this hotel. 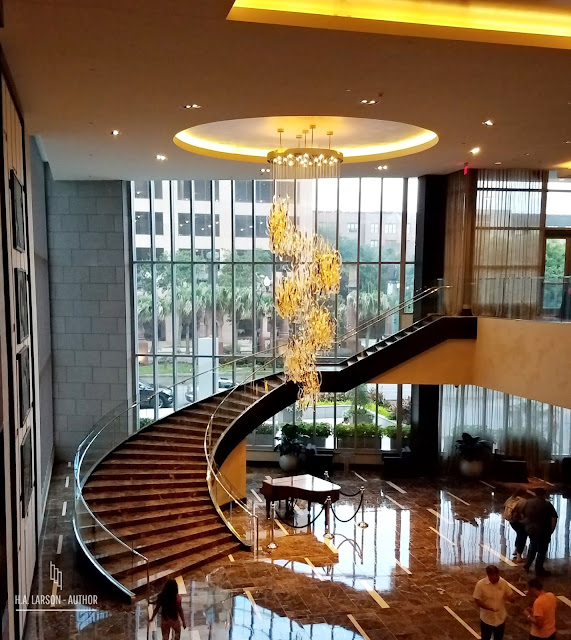 Rooms do not start until about the 4th or 5th floor, so you ride the escalator up to the 3rd floor to catch the elevators to rooms. This is the view as you come down the escalator from the 2nd floor to the Lobby. It's gorgeous, isn't it? 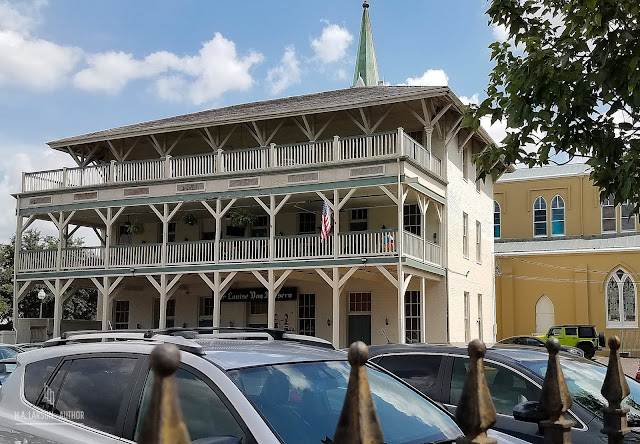 We flew in on a Friday afternoon and took the city bus to the hotel. Incidentally, the city bus picks you up right outside the airport and drops off a few blocks from the hotel, all for $2.00! For those of you afraid to take public transportation, don't be. I've used it in various places - including Europe - and they're always cheap, fast, and reliable.

We didn't have to start working until Saturday morning, so we took advantage of Friday afternoon to get out and about a bit. We were hungry so set off in search of food. Of course, being the vegan foodie that I am, I had already scoped out the best vegan spots in town and discovered that Seed was only a mile from the hotel. So, we freshened up and headed out on foot (gotta get my 100 miles a month in!). We passed this interesting building on the way there. I snapped a photo because I felt like it was starting to look like New Orleans. 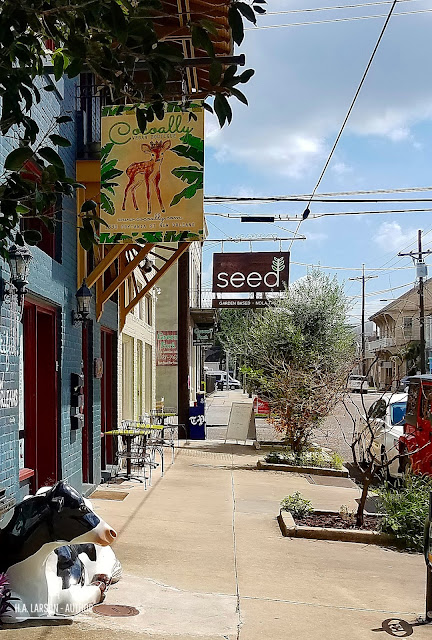 A view as we approached Seed. It was bright and hot that day, the temperature was a humid 96 degrees, so we were hot and thirsty by the time we arrived there. 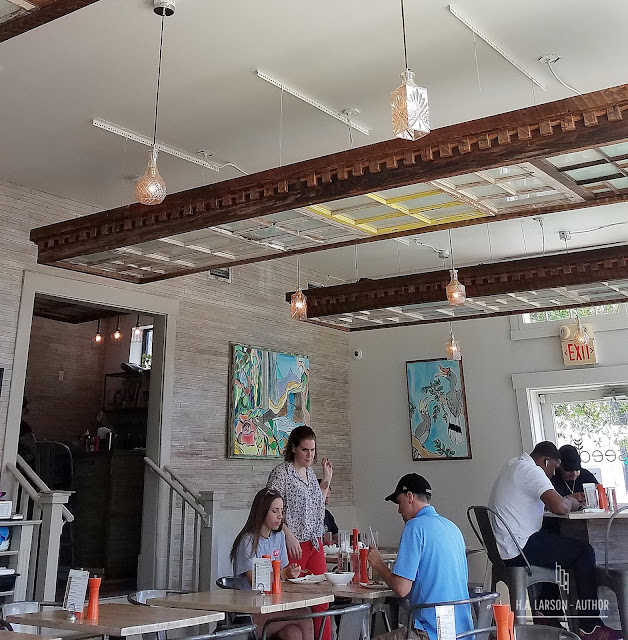 Not only was the interior refreshingly cold, it was cool. It had a minimalist decor with local art adorning the walls and old window panes that were turned into ceiling decoration. 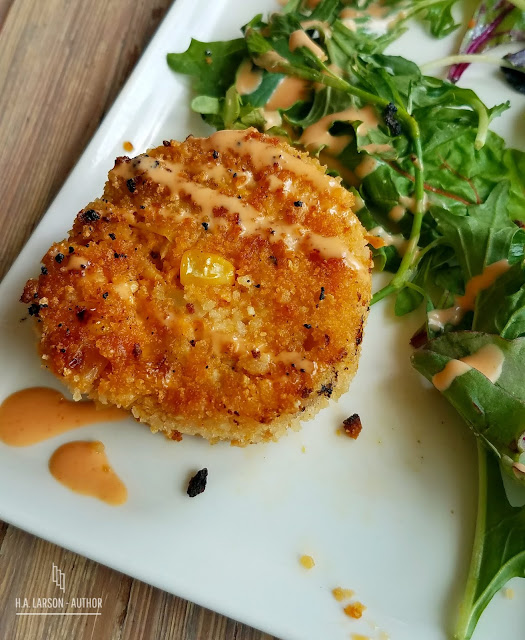 Whenever I get a chance to eat at a fully vegan restaurant, especially one I've never been to before, I will order a few of the appetizers. Here you can see their Artichoke Cakes drizzled with spicy Buffalo sauce. Made of artichokes, heart of palm (a common ingredient in vegan crab cakes), corn, red pepper, and gluten-free panko, these cakes were spicy and delicious! 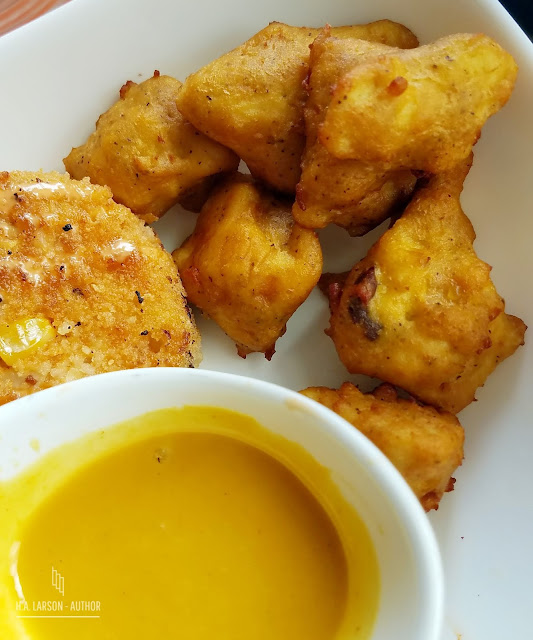 We also ordered the tofu nuggets. Crispy, these bites of deliciousness had the perfect texture and flavor. Served with your preference of three sauces, we got the Honey-Agave and the Garlic Aioli. The third sauce is BBQ but we decided to go for ones we couldn't easily get anywhere else. I could eat these fabulous nuggets every day! 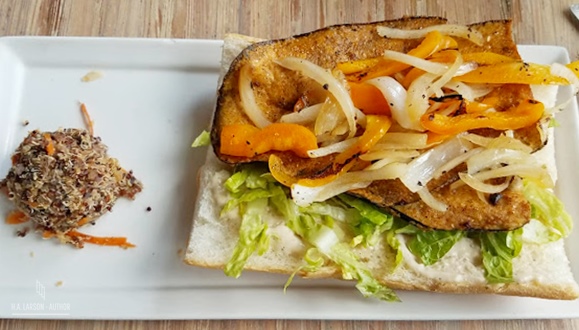 One of the reasons I picked Seed was for their authentic, veganized New Orleans food. Besides the appetizers, then, I ordered the Eggplant Poboy. Breaded in cornmeal and deep-fried, these thin, perfectly-crisp slices of eggplant were served on a chewy hoagie bun loaded with lettuce, sauteed peppers & onion, and generously slathered with Garlic Aioli. I've never been a fan of eggplant, but this Poboy was so tasty that I will probably give eggplant another try one of the days.

If you're vegan, vegetarian, or just like damn good food, I highly suggest Seed if you ever find yourself in New Orleans. 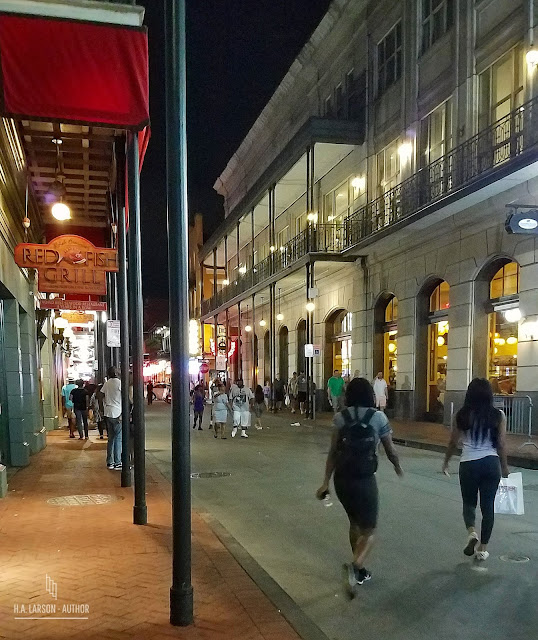 Of course, one must go to the French Quarter when visiting New Orleans, so that's exactly what we did on Friday evening. Here we are just walking up to it, and if you look ahead a block in the distance, you can see all the neon. 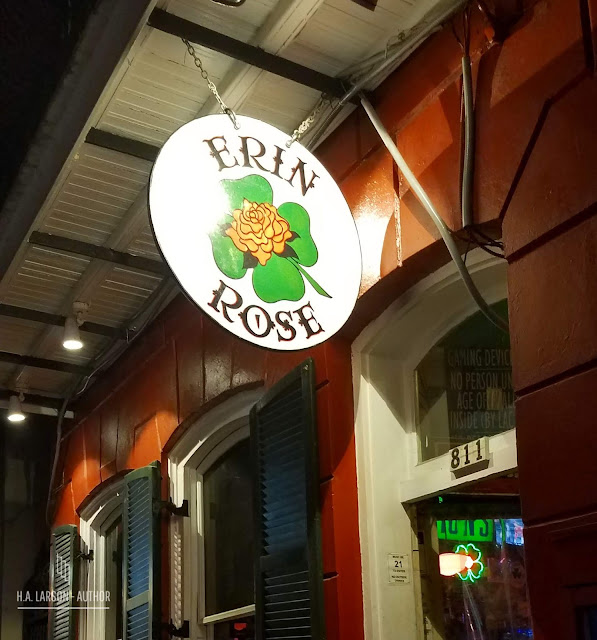 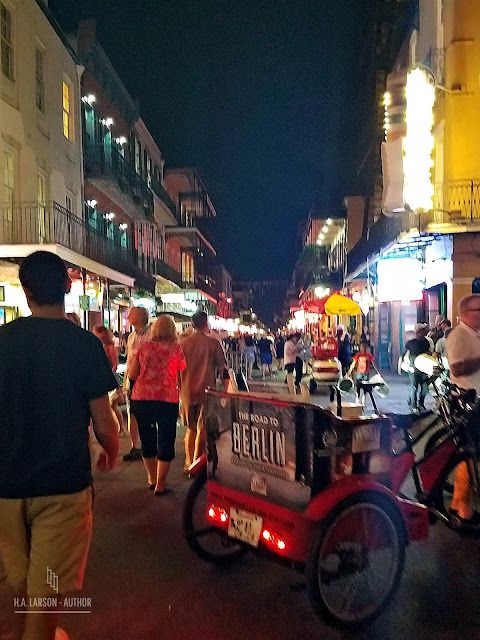 A view down Bourbon Street gives you a glimpse of what it's like at night. Truthfully, Bourbon Street at night is smelly, crowded, bright, and highly commercialized. I wish I could have come down to the French Quarter, and off of Bourbon Street, during the day as I'm sure it would have been a completely different vibe. 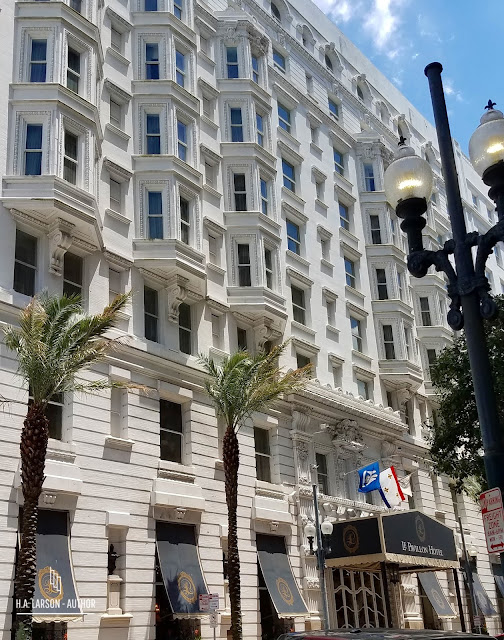 A view of Le Pavillion Hotel from the side. The palm trees give it a tropical feel.


This is the front of the Le Pavillion Hotel at night. It looks much different from this perspective.

While there were so many things I wished I could have done while in New Orleans - visit a cemetery, take a haunted tour, walk around Lake Pontchartrain, or tour the Museum of Death - I did have a good time in New Orleans, overall. I went to Bourbon Street and ate a Poboy, and I spent a good amount of time hanging out with interesting people and drinking lots of good beer. Someday, I just might come back and do the things I wish I had done the first time around. Until then, I'll reminisce.

*When I think about it, HR-Minneapolis was just as big and tall as the HR-New Orleans, as they both stand at 32 floors. I think the way the HR-New Orleans is designed just gives the impression that it's much larger than its counterpart.