A Week in the Appalachias: Part One 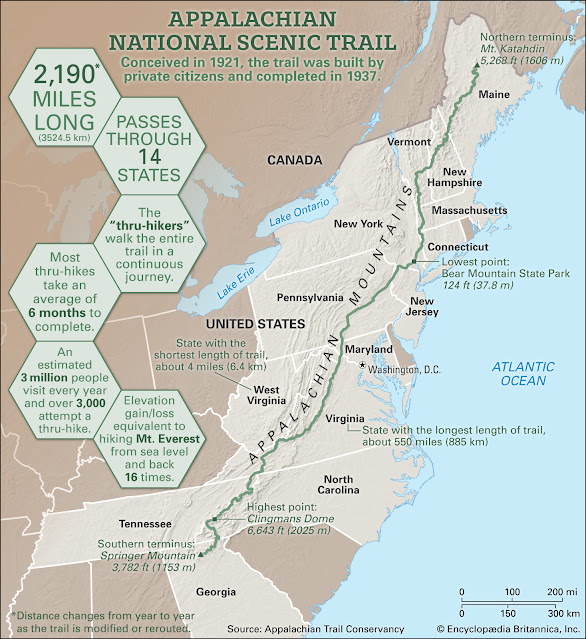 Several years back, I was rediscovering a love for hiking that I hadn't experienced since I was a kid. As I was learning and growing as a hiker, I heard about the Appalachian Trail (or AT for short) and thought hiking it one day sounded like something I might like to do. One of my best friends from high school, Amy, works for the Nature Conservancy so I mentioned it to her in hopes that maybe she might like to join me. She decided she did but that it would only be for a section hike and not the entire thing, and so the seed was planted for hiking the AT one day. We determined that we should do it when we turned 50, and that time was this year.
We settled on a week of backpack camping and AT hiking near Roanoke, Virginia. We flew in late in the evening/early in the morning and spend a day in town getting items we couldn't take on an airplane and making last-minute arrangements. Unfortunately, I came down with a horrible, long-lasting sickness on the morning of day three. This altered our plans quite a bit, still, I have some photos and memories of the two days we were active on the Trail plus a few days elsewhere. There's a lot of stuff to cover, so this post will be split up into two parts. So, here we go with part one! 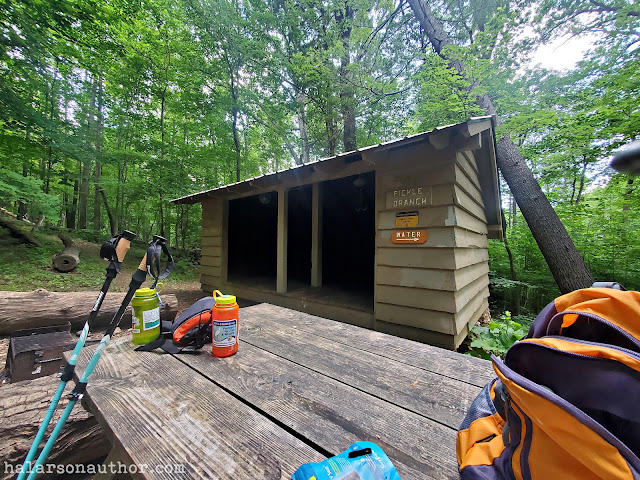 We set up camp between Cove and Brush Mountain, near Trout Creek for our first two nights. After setting up camp on day one, we headed up Cove Mountain. We stopped here, at Pickle Branch shelter, for a quick break. 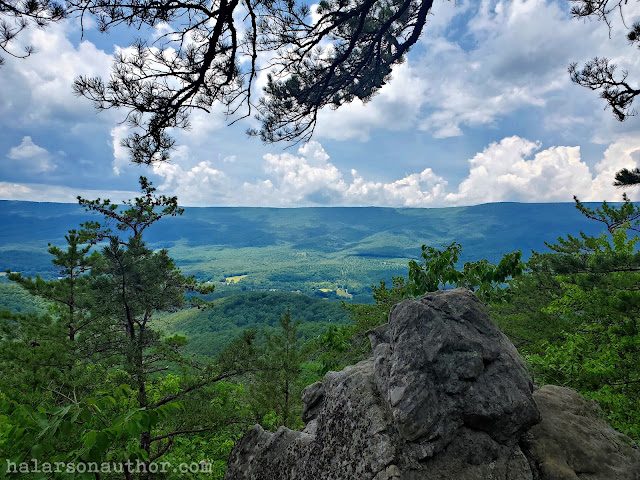 There's a lot of tree line along the top, but we still managed to find a rock outcropping with a view as soon as we reached the ridge. 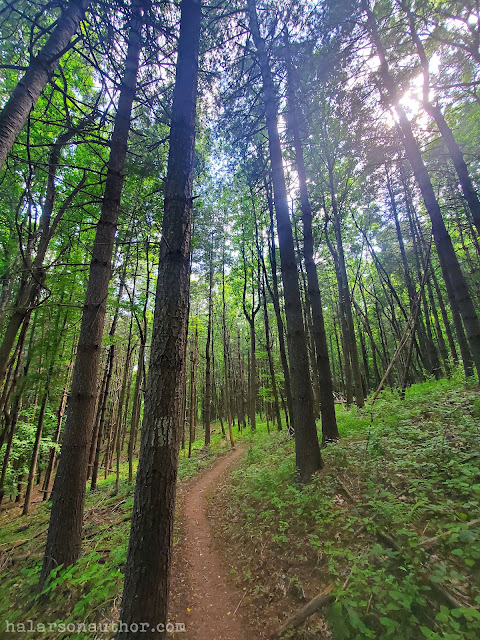 The Trail is mainly surrounded by a relatively thick dense of tall trees. Not only beautiful but good for getting some shade. 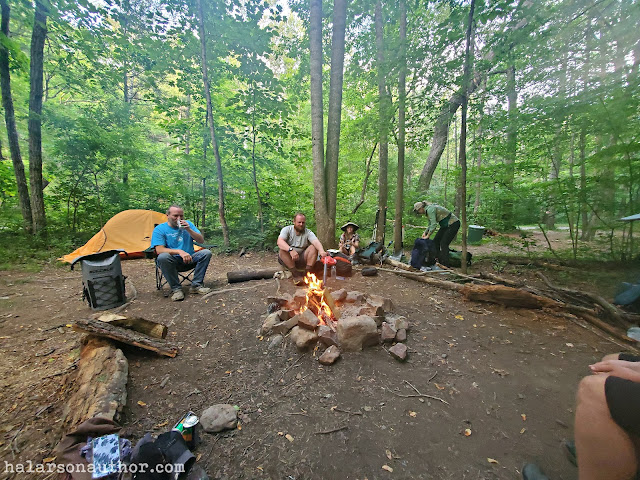 After a good 8 miles for me and 10 or so for Amy, we arrived back at base camp where we had some sketchy seating and a firepit to enjoy. We were soon joined by the gentleman on the left. He's a local that gives thru-hikers what is called "Trail Magic". Trail Magic is when locals like this meet thru-hikers and do wondrous things like feeding them, giving them rides to town, letting them stay at their homes, or, in the case of this trail magic, handing out cold cans of beer. See that green garbage can behind the woman on the right? Finding one of those on the trail in the forest is almost unheard of, but for another gentleman, that was his trail magic to hikers. He does come and retrieve it each evening so the bears won't get into it and destroy it.
After filtering some water and getting some dinner made, we were joined by this family of thru-hikers (they're the people you see in the photo besides trail magic guy) that consisted of Dad, Mom, four kids, and one dog named Muir. This wasn't their first thru-hike and they were cool to visit with. After their dinner break, they carried on to spend the night at Pickle Branch shelter.
Not long after they left, another thru-hiker, called Yardsale, come through. He stopped for the free beer from trail magic guy and ended up setting up camp with us for the evening. We stayed up late visiting, telling stories, drinking some strong hooch, and being entranced by the flames that emanated off the fire pit. 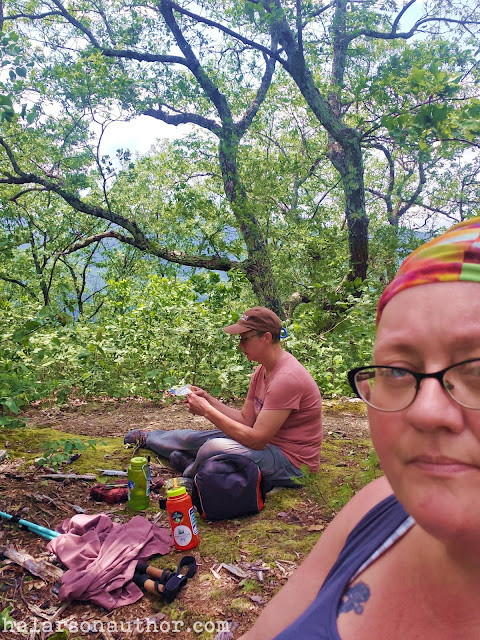 The next day, we set off in the opposite direction from the day before in order to climb Brush Mountain. It was as much elevation gain as Cove Mountain, but it happened over a shorter distance. While that might sound good, it just means the trail was steeper and, thus, harder. We took a food break at the top. 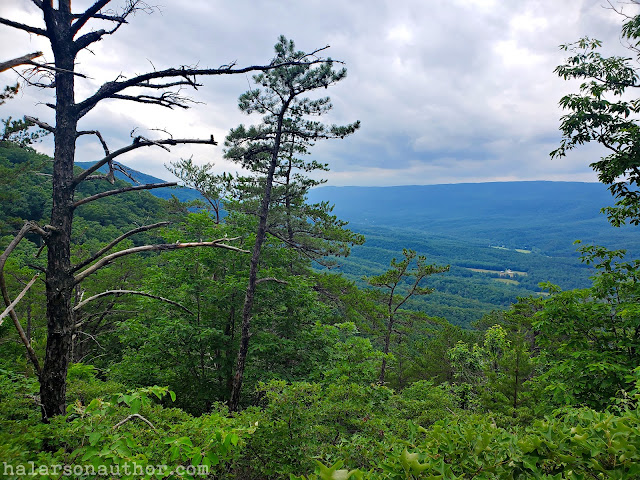 The nice thing about Brush Mountain in comparison to Cove Mountain is that there were more clearings in which we could get those ridgetop views. 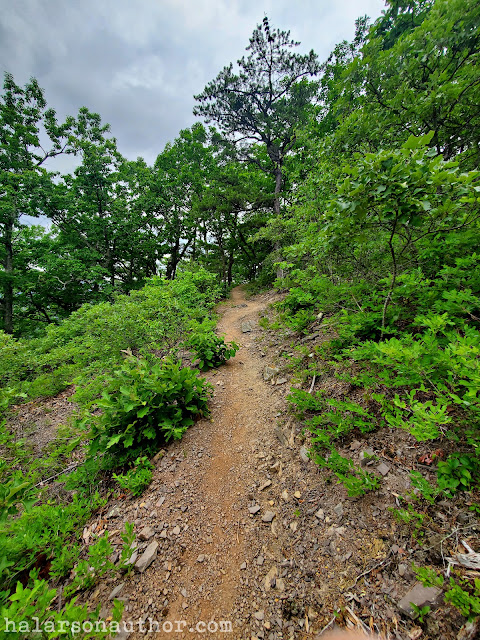 Difficulty be damned, it was sure a beautiful hike. Truth be told, Brush Mountain had better scenery than Cove Mountain. 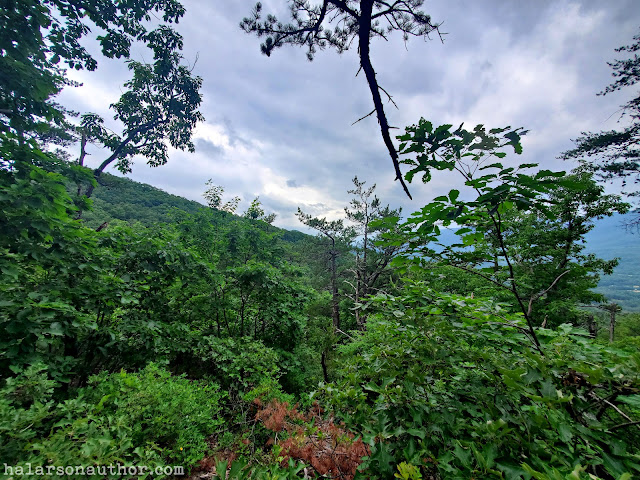 The Trail Magic guys (I nicknamed them Beer Guy and Trash Dude) came by again for a longer visit the second night, along with another random guy who was playing some kind of drum for thru-hikers. He slept in the bed of his truck close by that night. I woke up that next morning with the stark realization that I was definitely moving quickly towards sickness.
We were already planning on moving to set up camp at a new location with different AT hiking opportunities. With my sickness, though, we decided to hole up at a motel for the day. We washed our clothes, showered, ate some fast food, and then I slept for a solid twelve hours driven by my illness. I woke up the next day feeling even worse so we stayed another night.
We decided that we better alter our plans to accommodate my illness, so we scoured a map of the area. We decided to rent a car and spend our last two nights camping at Peaks of Otter. 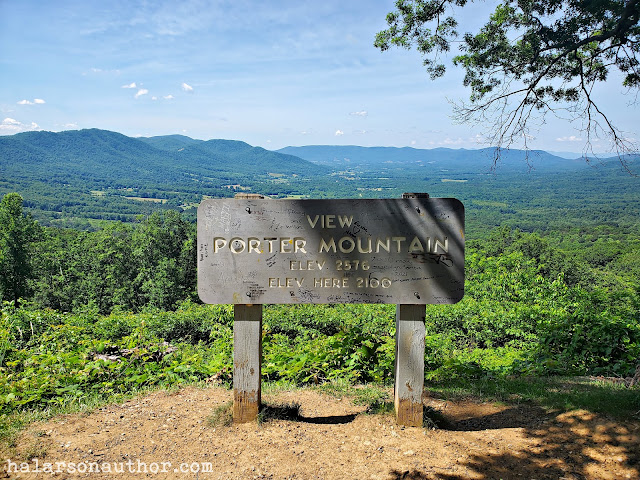 On our way to the Peaks, we stopped at a scenic overlook that surveyed Porter Mountain. It was a gloriously beautiful day and, for a moment, I forgot about my sickness and never-ending cough.
That's it for part one. Stay tuned for part two!
Labels: Adventures in Travel Photography The Great Outdoors