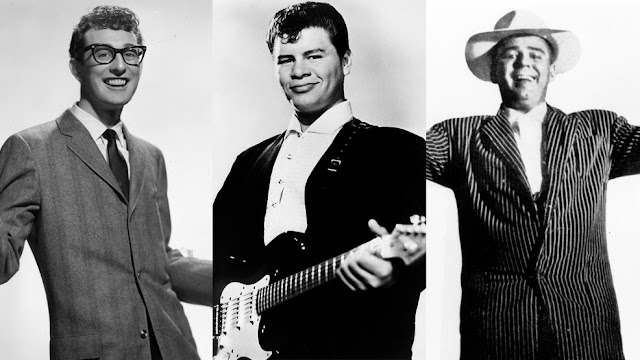 In January of 1959, some of the biggest stars of Rock 'n Roll set out on a whirlwind 24-day tour called the "Winter Dance Party". The headliners of the show were 22-year-old Buddy Holly, 17-year-old Ritchie Valens, and 24-year-old The Big Bopper (aka J.P. Richardson). 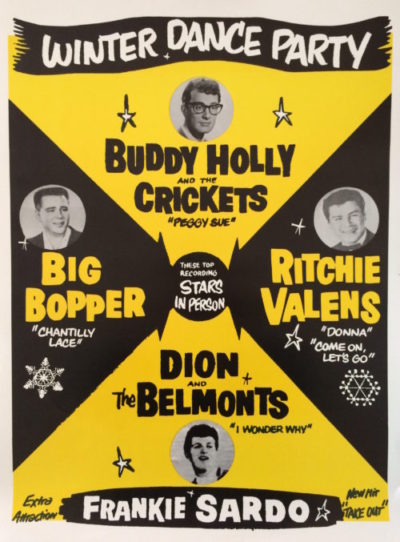 Ballrooms were THE place for concerts of the day, and the tour, with the exception of a few theaters and one armory, was set to play in them all across the Midwest. It was a cold, brutal winter, and tour buses did not have heat in those days. So, it came to be on one such frigid day on February 2nd, the tour arrived in Clear Lake, Iowa, named for the lake it was built up around. Lakes lend more chill to an area than those without, so Buddy Holly, tired and cold, decided to charter a small plane to take him and two members of his band The Crickets - Waylon Jennings (yes, that Waylon Jennings) and Tommy Allsup - to the next stop on the tour after the Clear Lake gig.
The Big Bopper had the flu so Waylon gave up his seat to him and Tommy flipped a coin with Ritchie Valens for the last seat. Tommy lost and Ritchie reveled in the fact that he wouldn't have to face another freezing night on the bus. 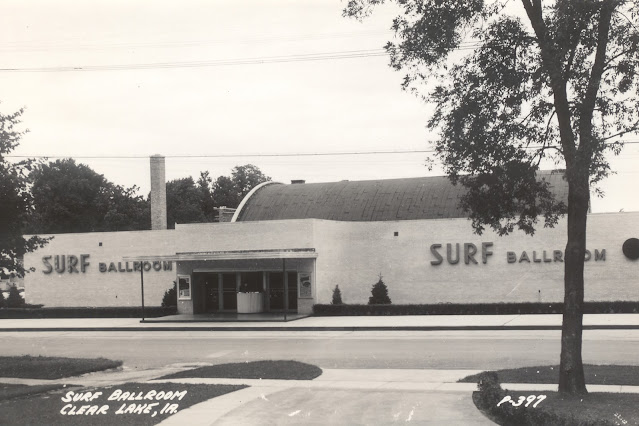 By all accounts, the show that night, held at the Surf Ballroom, was electrifying. These were some of the biggest acts in Rock 'n Roll at the time, and the air in the ballroom was palpable. After the show, Holly, Valens, and Richardson hopped on the plane to go to their next stop on the tour, Moorhead, Minnesota. But, it wasn't to be as the wintry, weather conditions and poor visibility made flying difficult and the pilot, a fairly inexperienced 22-year-old, crashed the plane in a farmer's field a mere two minutes after takeoff, right before 1:00 a.m. on February 3, 1959. The four of them were killed instantly upon impact and, as they say, the rest is history. That day will forever be known as "The Day the Music Died", crushing the hearts of rock 'n roll fans all over the world and immortalized in Don Maclean's 1971 song "American Pie".
A little over 63 years after that infamous night, I made the trip to Clear Lake, Iowa, with my folks, my daughter, my best friend, Libby, and her son to attend the annual Color the Wind Festival. I won't get too deep into the festival itself as I will make a separate post for that, but as a big fan of '50s and '60s pop and rock music, I couldn't NOT go to Clear Lake and visit the Surf Ballroom and the crash site of the Day the Music Died. 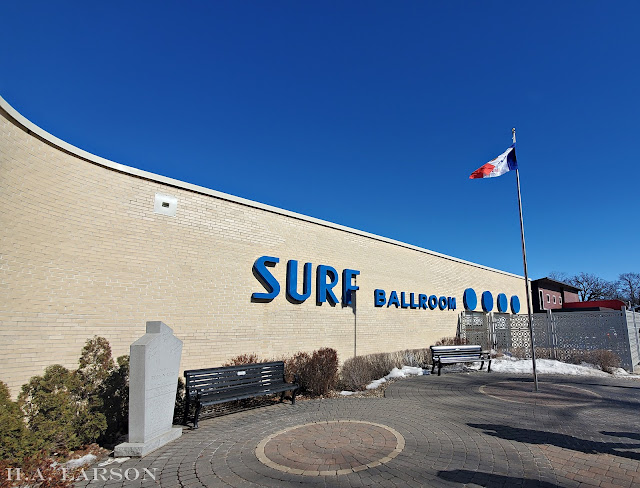 The Surf Ballroom, according to its website, "got its name (and motif) from the desire of the original owners to create a ballroom that resembled an ocean beach club. The murals on the back walls were hand-painted to depict pounding surf, swaying palm trees, sailboats and lighthouses. The furnishings were bamboo and rattan and the ambiance that of a south sea island. The stage is surrounded by palm trees and the clouds projected overhead make it seem as if you were dancing outside under the stars." 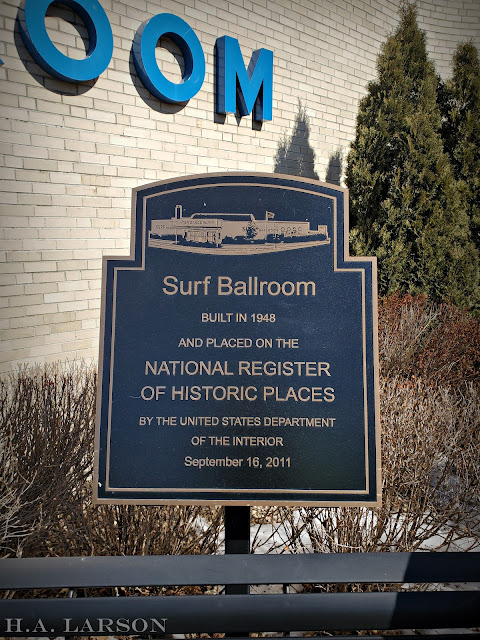 The Surf Ballroom is on the National Register of Historic Places and, to this day, remains lovingly maintained with its ocean motif. 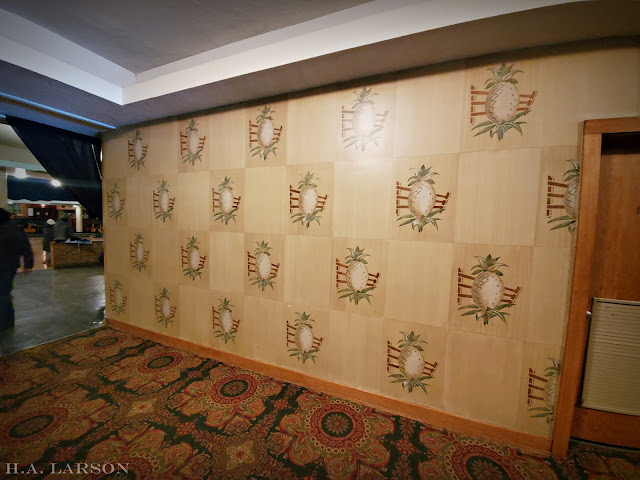 Inside the entry, the walls are covered in pineapple wallpaper. 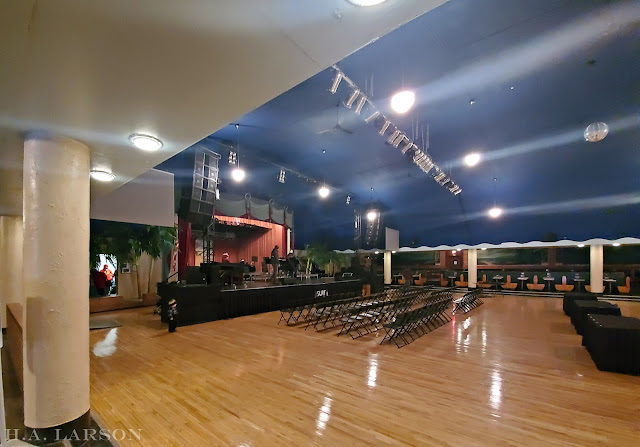 The dancefloor is polished to a high shine that reflects the floodlights from the ceiling much like the sun on the ocean. 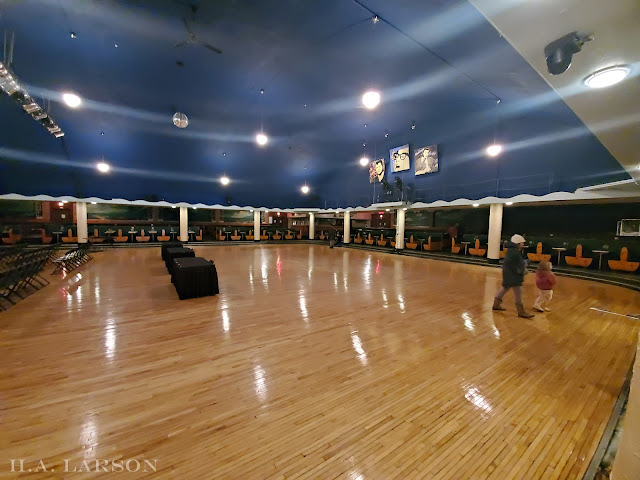 The dance floor is massive, and I can only imagine how crowded it was the night that Buddy Holly took the stage. 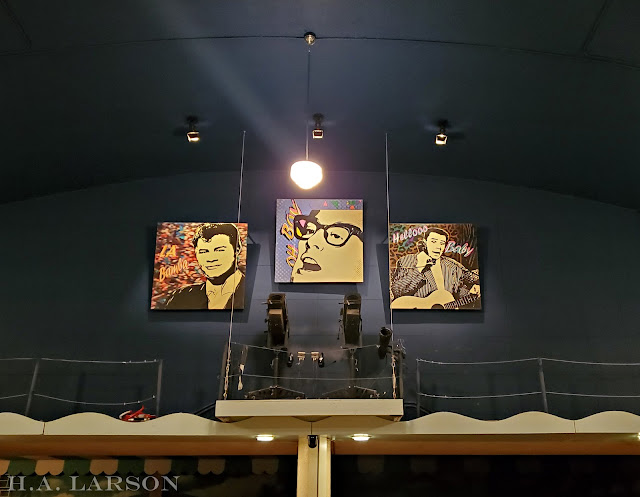 High on the ceiling opposite the stage are paintings of the iconic trio that lost its life a mere five miles away from this spot sixty-three years prior. 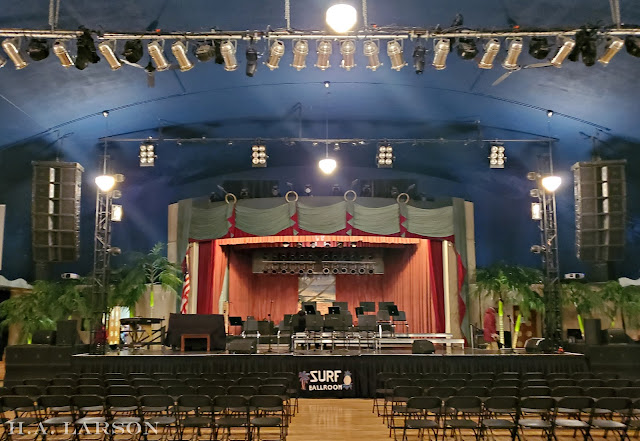 This stage is locked in time, forever surrounded by fake palm trees. 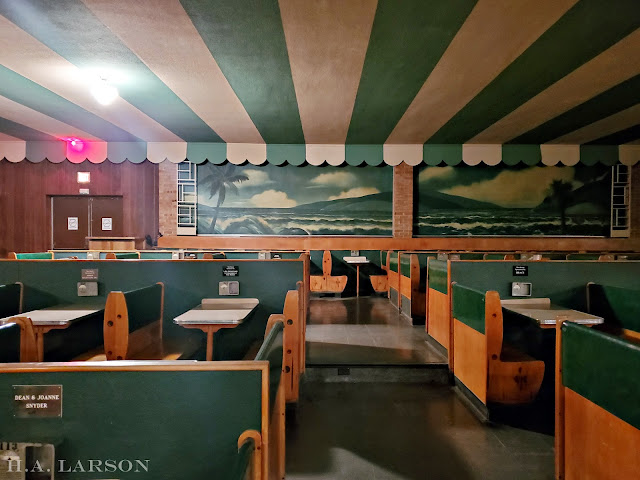 The booths that flank the dance floor on two sides look the same as they did when the Surf Ballroom was built back in the late 1940s. The painted and embellished ceiling recalls the beach canopies of yesterday. I can see young couples eating at the booths, surrounded by the crashing waves of the wall murals. 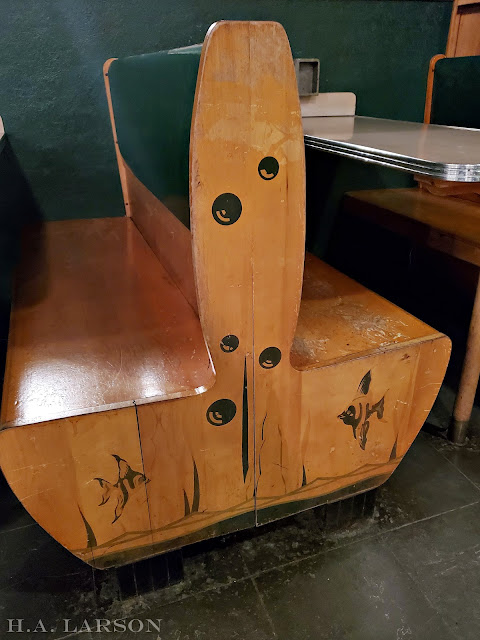 The old booths are painted with fish swimming at the bottom of the sea, their air bubbles making their way to the surface at the top of the booth seat. 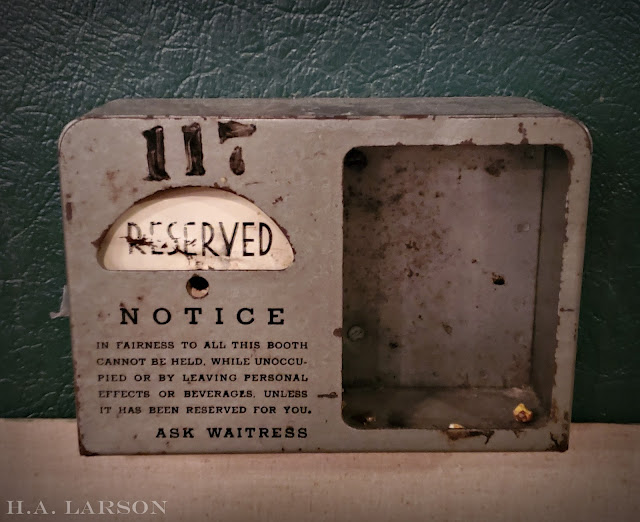 While the little boxes remain on the booths, they are no longer working, but are there to keep a piece of history alive. These boxes allowed staff to indicate that the booth was reserved and a little walkie-talkie radio of sorts sat where the hole sits empty. This radio allowed patrons to order food from their booth, which they would order over the radio to wherever staff was taking orders. 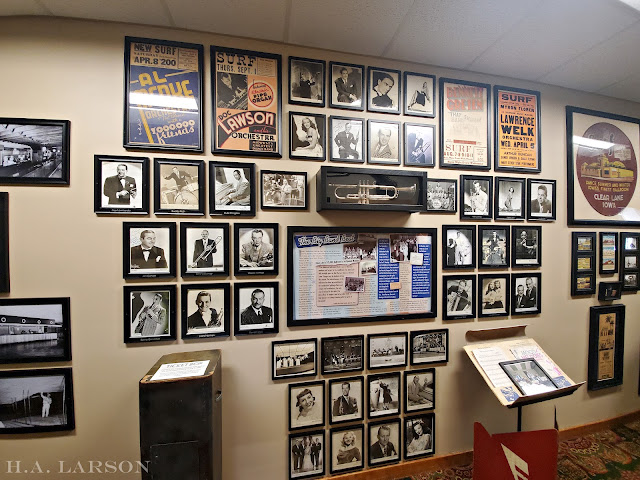 Beyond the borders of the dance hall, a museum of the Surf's history is showcased. Famous acts and old show posters line the walls. 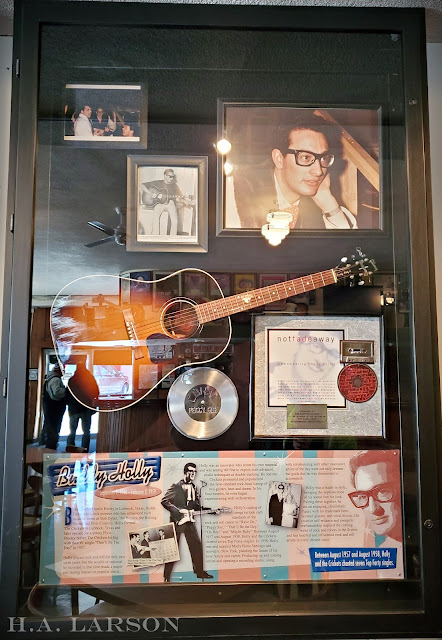 The biggest showcases in the ballroom's museum are, of course, of Buddy, Ritchie, and J.P. Inside this case is an old guitar of Buddy's plus interesting tidbits about his life - along with photos, of course. 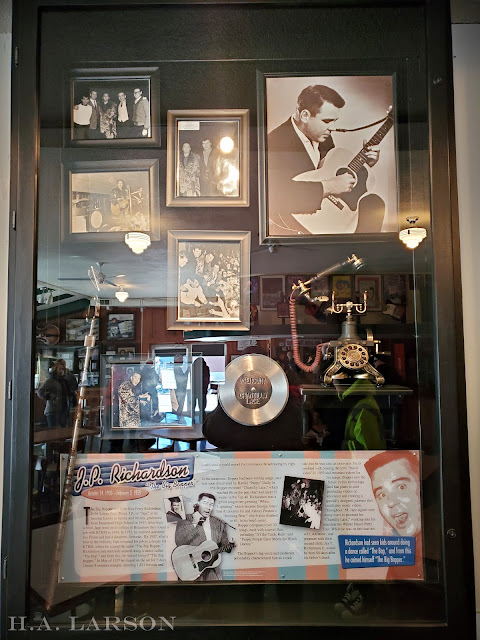 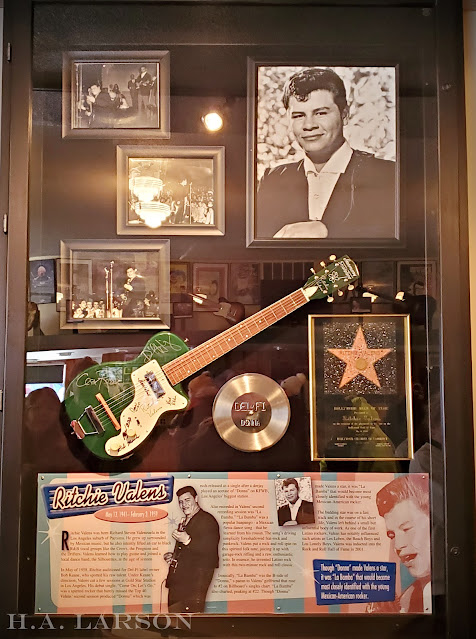 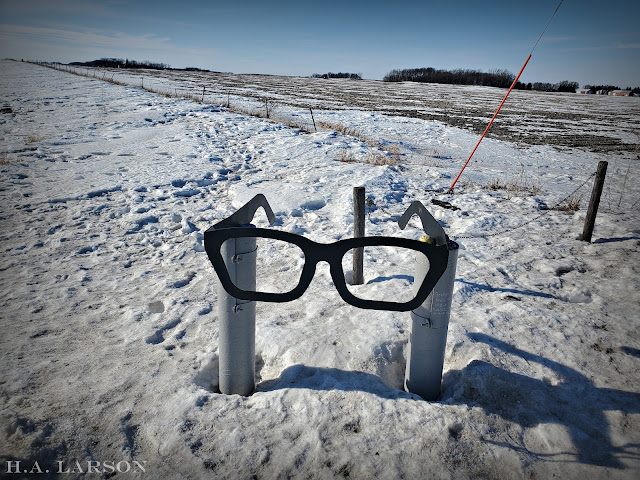 After the kite festival, we made the five-mile drive north of town to visit the crash site. You can't miss it as a large replica of Buddy Holly's signature glasses can be seen easily from the gravel road. 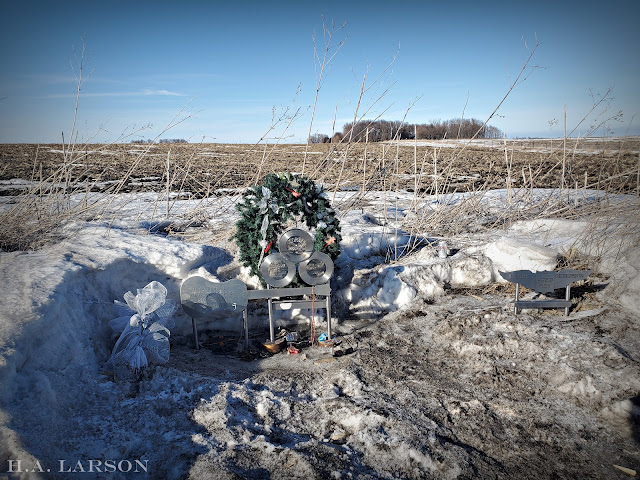 A mile walk to the west, through a farmer's field (the family - which has remained the same since 1959 - has allowed visitors here since the crash) takes you to a memorial to the Day the Music Died. The main memorial, on the left, is to the rock 'n roll trio, while the memorial plaque on the right is for the young pilot who crashed the plane, Roger Peterson. 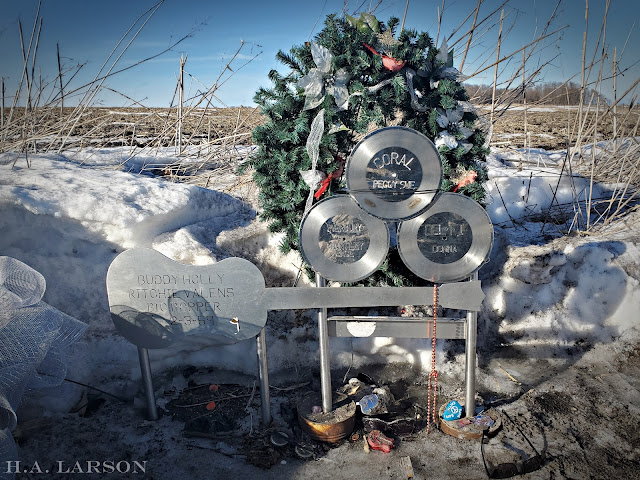 The memorial is a metal guitar plaque with the trios' names and... 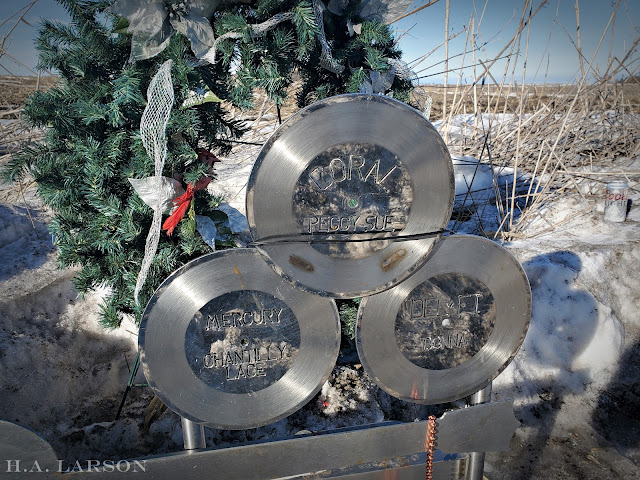 ...a metal record with the biggest hit each of them had. Buddy Holly's "Peggy Sue", Big Bopper's "Chantilly Lace", and Ritchie Valens' "Donna".
As someone who loves music from that era, I've listened to the music of Buddy, Ritchie, and the Big Bopper many times. Visiting the Surf Ballroom and visiting the crash site of the Day the Music Died wasn't just something to do, it meant something to me. I admit I got a bit misty as my Dad, my bestie Libby, and myself broke out singing Buddy's "That'll Be the Day" on a frigid Saturday afternoon in the middle of a stark, muddy, corn-stalk strewn field. And the Sun shown down bright - much like the memories that began right in this spot. Memories of what was, what could have been, and what will never be forgotten.
"That'll be the day when I die."
-Buddy Holly
Labels: Adventures in Travel Musings