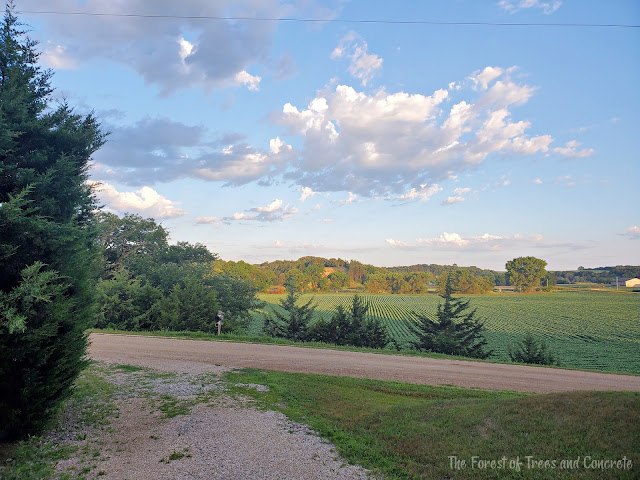 The night before we left, the kids and I started our vacation journey by traveling up to my Dad's house in northwestern Iowa. My dad lives in the country on an acreage and it is always a nice, peaceful contrast to the city street we live on. As we packed up the car the next morning to head out to Minnesota, I snapped this shot from the end of my Dad's driveway. It is times like this that remind me just how beautiful my home state is.

I was excited to head back to northern Minnesota. My Grandma's eldest brother lived in north-central Minnesota, and we would spend a week or two there every summer, instilling in me a love for the Northwoods. Except for a few trips to the lower part of the state, I hadn't been up to the upper part of it in many years. Being in the lower part is like being in Iowa, but when you get to the upper part, suddenly it feels like you're in Canada, and the difference is stark. 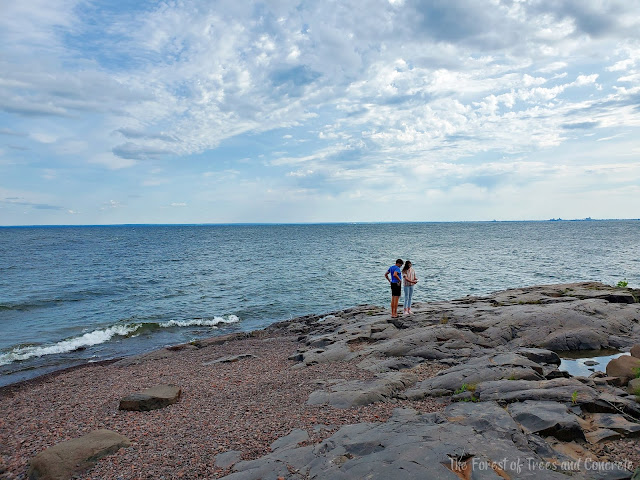 While I have been to Northern Minnesota, I've never been on the eastern border. This means I've never been to Lake Superior, the second largest lake in the world. When we crossed over the hill into Duluth, we could see the vast expanse of it, and it looked like an ocean. I had taken over driving duty from my Dad before Duluth, and when we got to Lakeshore Drive it didn't take long to find the first wayside stop. I pulled over so we could take in our first real experience with Lake Superior. The kids were completely blown away...and so was I. 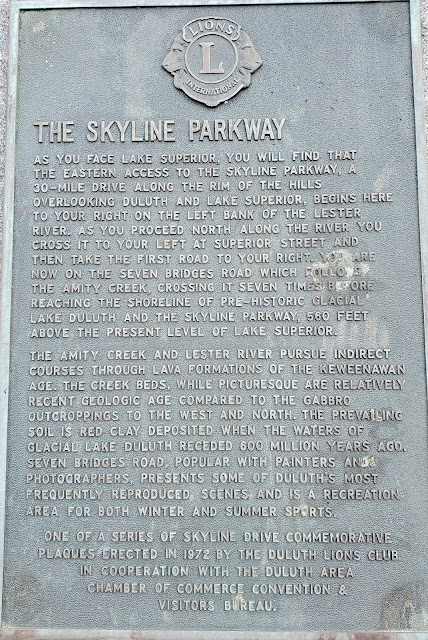 This marker at the wayside stop gave us some information about this section of Lakeshore Drive/Highway 61. 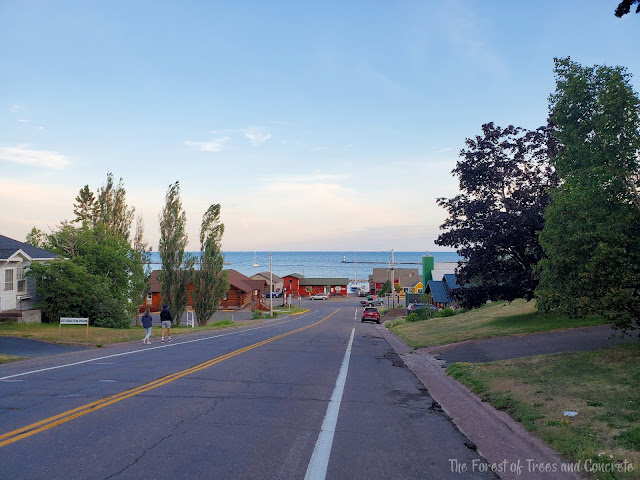 We made it to Grand Marais, our home base for the week, early in the evening, and you could literally see Lake Superior from the door of our vintage Northwoods motel. After we got unpacked, we decided to walk down to the Lake. The temperatures up here were a good 30 degrees cooler than back home and it was a nice break from the summer heat. 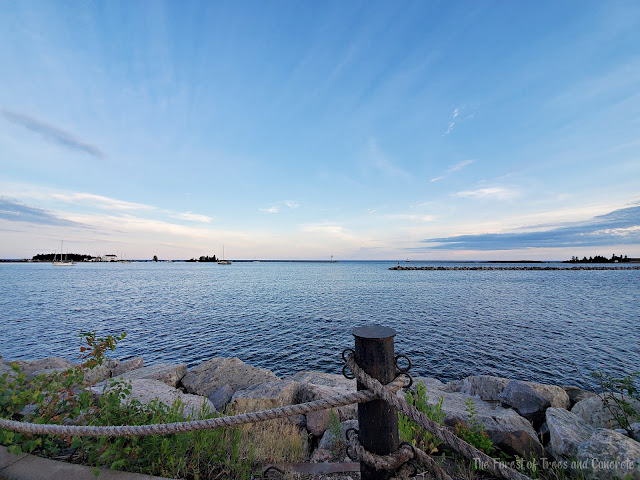 When we got to the shore, I could see boats in the harbor as well as a couple of small lighthouses. While we were only forty miles from the Canadian border, it really smelled, looked, and felt like we were somewhere in Massachusetts, or at least what I imagined Massachusetts to be like. 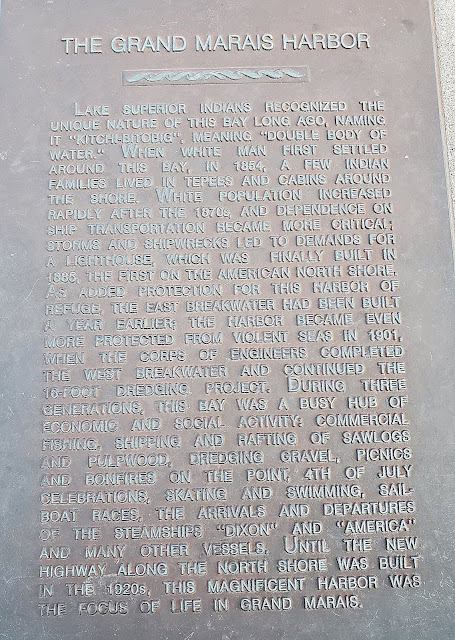 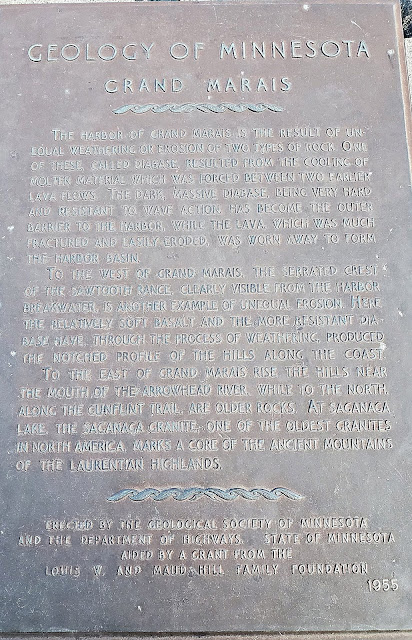 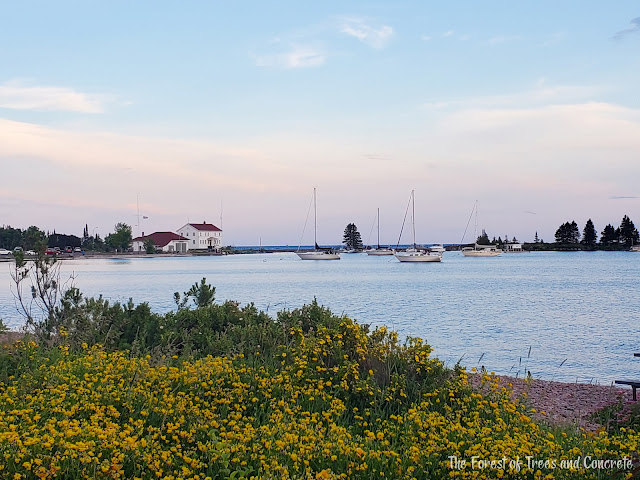 As if to drive home the whole east coast vibe, this view a little farther on our walk solidified that feeling. 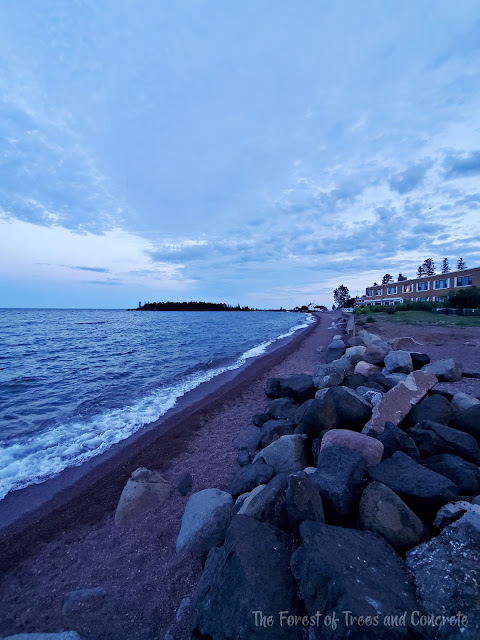 My dad and stepmom went back to the motel after a bit, but the kids and I stayed down by the waterfront for a while, checking out the varied parts of the coastline. The sun was setting by this point and the darker skies were a beautiful contrast. At this moment, I felt like I could live here. 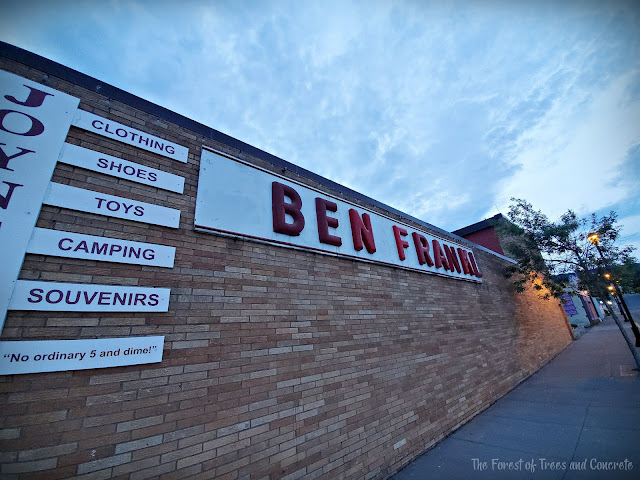 On our way back to the motel, we meandered through the bucolic, sleepy downtown area where I snapped this photo of a Ben Franklin. I can't tell you how long it's been since I've seen one of these relics of a bygone era, and I was surprised to see that it's still a vital store in the area. Grand Marais doesn't allow stores like Walmart in the area, nor fast food joints except for a couple, so it makes sense that stores like this survive.

After a nearly 12-hour drive, in total, to get to Grand Marais, spending time that first evening down on the Lake was refreshing and inspiring. I really felt like we were on the oceanfront. We made our way back to the motel and settled in for the night so we could begin our adventures the next day.

I'll be back on Tuesday for the next post in this vacation series, where I'll show you the fun state parks we visited on day two. So, make sure you come back for that! Until then, have a great weekend, and I hope it's filled with fun and adventure - big or small.